Hi guys! I mean, bonjour, it's French Week on the Great Canadian Baking Show! I would try do my level best to interject all the French I can remember but really: I'm just here for Dan Levy making faces. I got to use my GCBS knowledge the other day, are you excited to hear HOW? Rolling into my recap of the Great Canadian Baking Show S2:E06 French Week after the break!

So I just started a new job (yay, right??), at my first staff meeting there were: palmiers! I was very excited and told everyone how I knew what they were, thanks Great Canadian Baking Show! The person who brought the pastries kept calling them "pig's ears" so we looked them up (I rarely argue or persist unless I'm SURE and I was SURE), turns out they can be called pig's ears OR palmiers. Whenever my boss offered someone a pig's ear, I would whisper "palmier" softly because I am nothing if not a sore winner.

Anyway! We're down to our Final Four on GCBS, we've got, in no particular order: Sachin Seth, Mengling Chen, Andrei Gorgova and Megan Stasiewich.

I feel like Megling will be going home during this semi-final, which is not a shot at her! She's only been baking for a relatively short time, so isn't as sure as the others with some of her choices. She's an excellent baker and there is no shame in being in the top four in Canada!

Hosts Dan Levy and Julia Chan enter the Bake Off tent with judges Rochelle Adonis and Bruno Feldeisen, we're already at the Signature Challenge! The baketestants will be creating Mille Crepe Cakes, which is lots and lots of layers of crepes shaped like a cake. Sure!

Wow, they need to make at least 25 layers. I mean, it's not a thousand but still. Mengling swallows hard.

Megan's up first to show off her orange and white crepe cake that looks like a Creamsicle. 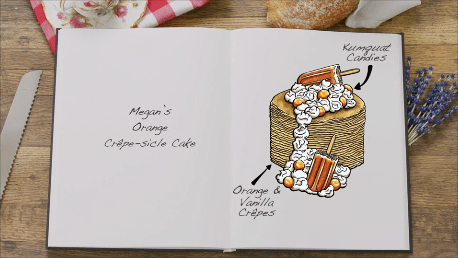 I really thought she would go with a tiger theme when I heard orange, but I guess Creamsicle is fun?

Everyone gets to watch Menging do her first crepe, Rochelle looks concerned.

I would try Mengling's cake but. No. I wouldn't. 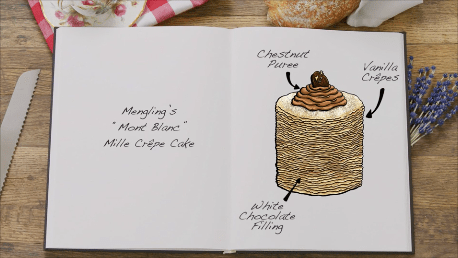 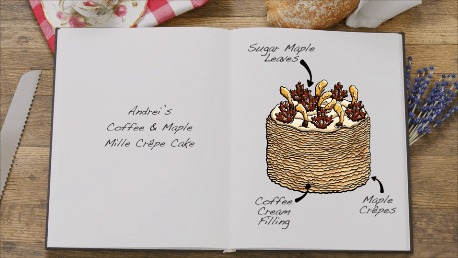 I really like the sound of Sachin's crepe cake but I'm unsure that he needs to have two types of almost identical berries. 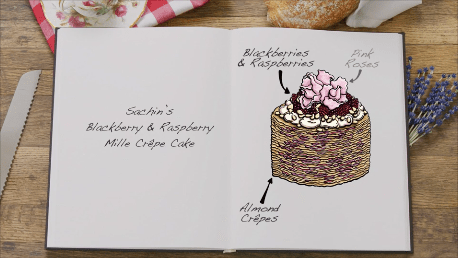 Dan is stoked to try a kumquat at Megan's bench but.

They must be tart!

Perhaps Dan and his impossibly expressive face could narrate all baking shows ever? From now on? Make it so, universe!

It's the final decorating push for the cakes, HOW is Megan always so calm? She just casually pulls out her Creamsicle while other people look like they're trying to pass a random drug test.

Time for judging! Let's have a look at the creamsicle, yes? 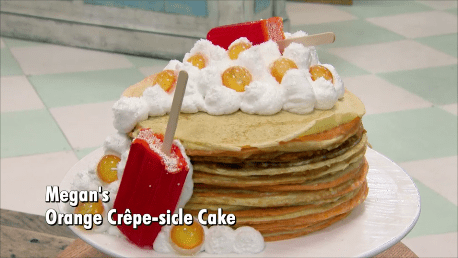 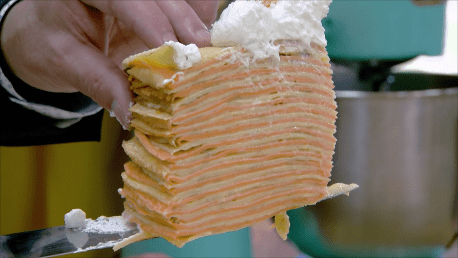 She scores very well, as does Sachin with his double berry mille crepe masterpiece. 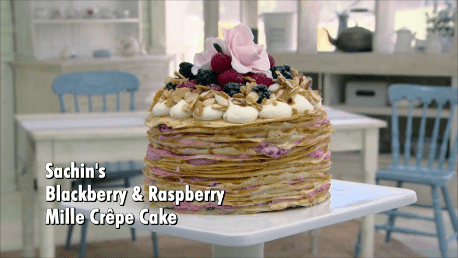 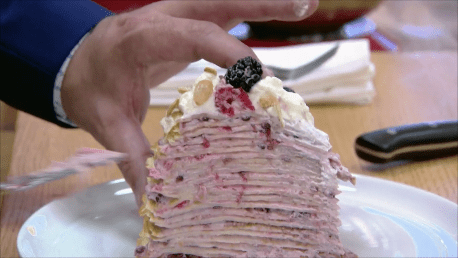 Not so for Mengling, who has "not represented her crepe making skills" in the best way with her uneven crepes. That's SUCH a Canadian critique; we absolutely know you are so much better than this! 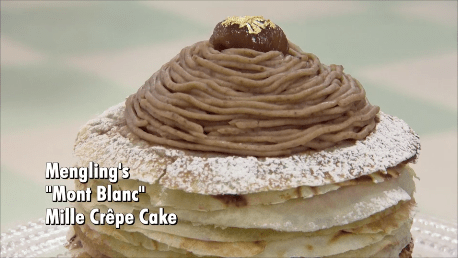 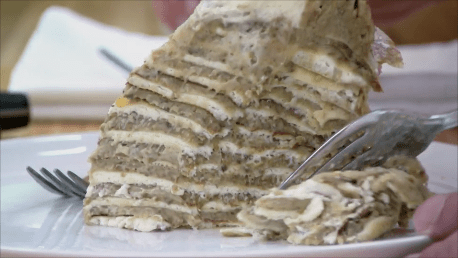 She used a heavier whipped cream and chestnut cream in between her burnt and crispy crepes, that kilt it as well.

The winner of this challenge has to be Andrei, who once again wows the judges with his precision and flavours. 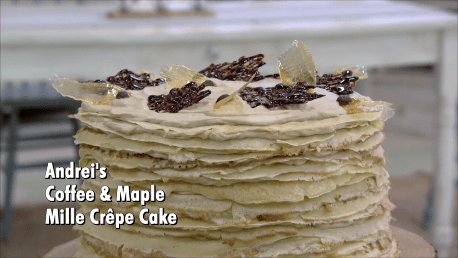 Look how tidy and uniform his crepes and filling are! 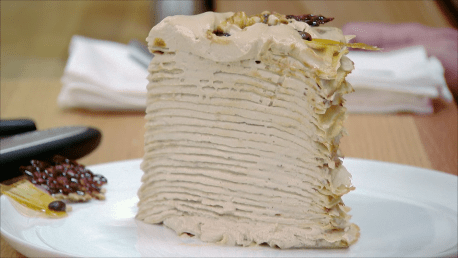 Bruno has to say this in French, he liked it so much! 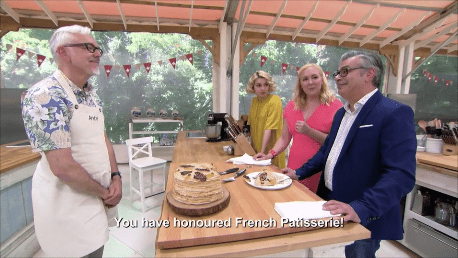 Mengling knows what has to happen to make it to the finale.

Speaking of the Technical Challenge, Bruno's only words of advice are to "comb" through the recipe and "bonne chances" which has to mean something with honey. But what? He and Rochelle leave the tent, Dan and Julia fill us in on the blind-judged challenge for this week. The bakers will be creating 12 mini joconde cakes. Okay! 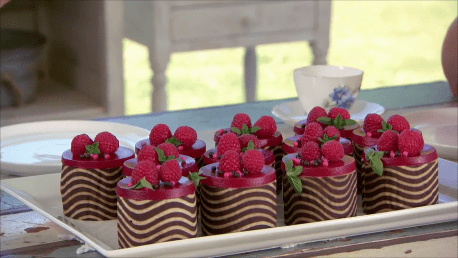 Oh wait, these do sound tricky. There are two pages of instructions and you know there's nothing specific in there whatsoever!

This is going to be impossible. 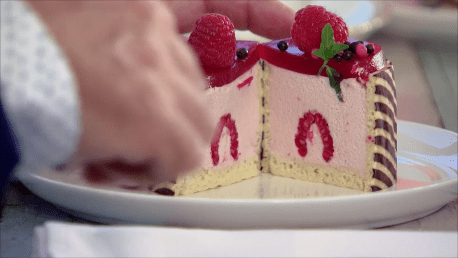 The first difficult part is getting the gelee made, it has to set in the fridge. All the bakers pour their liquid into a sheet pan then carefully walk it over to the fridge. I have to ask if it wouldn't have been easier to pour it into a pan in the fridge but then I'm not trying to make these

in a mere two hours.

The next step is a set chocolate design in decor paste, Andrei has to deviate from the recipe to get a pattern, so I dunno, man. This puts him behind the others, who set their sponges onto the paste and bake right away.

Dentist Sachin would literally rather be pulling someone's teeth out right now, that's a strong statement from our calm and steady fella from the east coast.

Timing is a serious issue today, I am almost watching through my fingers as Andrei and Mengling fight to finish on schedule. 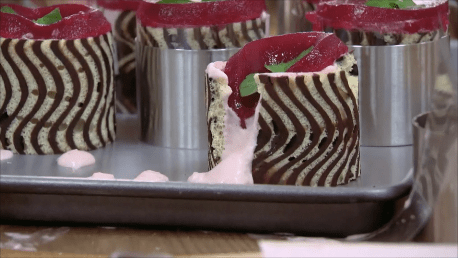 From least awesome to most best, we have:

Going into the Show Stopper Challenge, Sachin is feeling confident and really good about his chances. Now, I know Sachin will be in the finale, there's no way he wouldn't, but I don't know why he would tempt fate like that. In contrast, Andrei is feeling like an unmade bed, he didn't sleep well the night before.

The Show Stopper is a combo challenge! The bakers will be creating 36 savory canapes including:

In case you are keeping count, that's three different types of dough/techniques in one challenge. Puff pastry has to be banged on and chilled repeatedly, bread has to proof, this is a timing nightmare. At least pie pastry isn't as complicated.

Megan is making black bread with activated charcoal because of course she is. 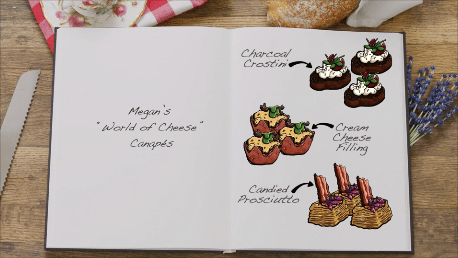 Huh. Mengling is making a bunch of weird stuff. Good for her! 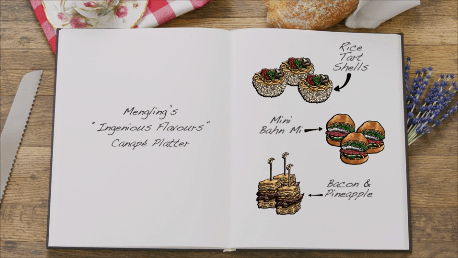 I can't help but wonder what Devon Stoltz would have made; I bet his canape game is strong like bull.

I would 100% eat everything Sachin is making today. 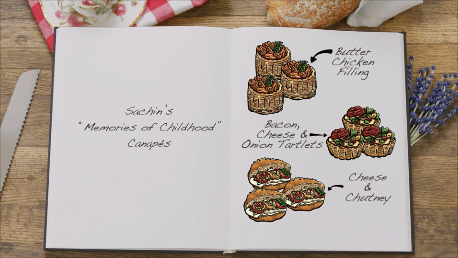 Same same with Andrei's tiny yummers! I love the idea of a Ploughman's Lunch canape bite! 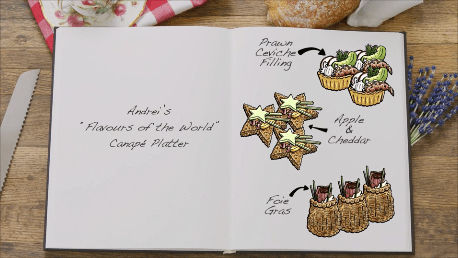 First up is Andrei, he scores high on everything but the Ploughman's Lunch bread, which is tough. 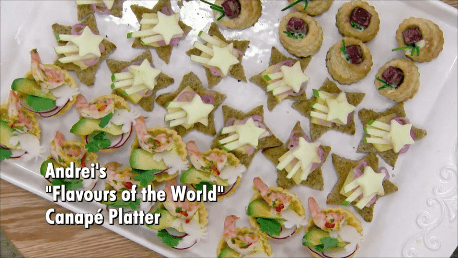 On to Mengling's well presented canapes. She does well on 1 out of the 3.

Sachin mostly does well, slight underbaking on his puff pastry.

Of course Megan's look great, she's almost a lock for Star Baker today. They rave about her puff pastry, when she says she was nervous about it they urge her to try one. It's good! Hahaha

And going home as the fourth best baker in Canada of this year is: Mengling, which I also knew. She did a great job with her cakes and treats this year, woooo, enjoy the success, Meng!

Onward to the finale, I'll see you for that next time!