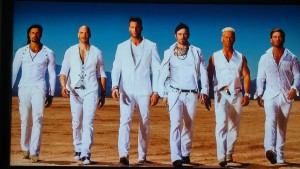 I'm sorry I've fallen so far behind on Gigolos, I've been caught up in another fantastic show and am just that weeee bit behind schedule on our muscled companions. We roll!

We open at Bradley in a extry tacky hotel room (heart-shaped tub anyone?) and crusty carpet (I can totally feel all the leftover dried bits of DNA between my toes) tossing aboot rose petals and lighting candles. He has a date with someone who usually takes care of everyone else, now it's her turn to be pampered by this Cowboy4Angel.

The client arrives, it's 58 year old Kandie, a hospice worker. 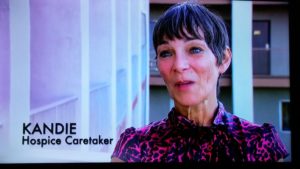 So she's not just an angel, she's an Angel of Death! She's been married several times (what does that mean? 3? 4? 87?) and her hubs were all kind, but she needs more than that, she needs the Bradley Lords' snug Banana Hanger of Love!

You know what I always think when people fawn over how charming Bradley is? I think about what Amy Schumer said in her HBO special about Kate Upton; people think ANYTHING beautiful people say is charming and witty. I have super-special x-ray radar glasses, so I don't get it, but I do understand the concept of projection: these women really want these dates to be perfect.

Kandie has been a hospice worker since her father-in-law passed away while holding her hand (AoD!), sometimes she even sleeps on the floor next to to the bed holding their hands and uh... that doesn't sound like a healthy patient / client distance. She's with the dying people 24 hours a day at the end, walking that death path and she has no energy for anything else. I mean. I guess not.

Kandie's getting nekkid in the cheesy, cheesy hot tub, I LOVE IT when we get to see different body types! It just never happens on TV, does it? Unless we're talking stereotypes, then we might get a couple outside the mainstream, but rarely.

She calls Bradley her "diving board into the world again!" and she's very excited. She thinks this was much safer than going out and picking up a guy in a bar or a club and I dunno, man, don't they have apps for that kind of thing these days? Beer, pizza and peen delivered to your door all within an hour? Although she DID kind of order Bradley, so let me shut up.

I'm suddenly very worried that my neighbours can see my TV and think I'm some kind of deviant. It's NapTime!!

Kandie cries thinking about her clients, they would have ALL wanted her to be happy like this, in fact, her Father-In-Law would have paid for it! Er. She just hasn't had the time or energy to give to men, something Bradley can relate to. When he's feeling low, he can't exactly be his Wolverine-mutton-chopped sneery best self, so he'll ask Garren to not book him for dates until he's recovered.

Now we're in for another Nick Hawk adventure! Whatever you think of Nick, you have to respect his hustle game, and from some of the interviews, I can almost see how he'd be kind of endearing, if you were into narcissists with bum-rage issues. His newest idea is to try out for something called The Future Stars of the Wrestling, which sounds like a super way to rip off people with more muscles than brains. Brace is gonna help! Nick does have a background in jujitsu, so it's not completely out to lunch.

Nick has always been a wrestling fan, since he was a kid, and no tea no shade, I dug wrestling when I was a kid too. Brett "The Hitman" Hart is a friend of a friend and I have never met the man, for fear I would dissolve into an embarrassing pile of goo in his presence. Cuz that's what I do around celebs, it's so awful. He was The Demolisher when he was a kid! Whoops, raise voice up three octaves "The Demolisher!"

They're picking through names for him while looking at facial makeup ideas for him; Brace will be the manager and they will be a Heel (villain) Team, not babyfaces (heros). Vin is just too smart for these guys, he's talking about bird families and suggesting The Raptor, because of Hawk and the guys, well, bless their hearts. They're trying to understand!

Side note: I don't remember if I've mentioned this, but I'm quite concerned about Vin's face, he appears to have some kind of skin discoloration high on his left cheek? Is that skin cancer? VIN. BE WELL

Date time! Ash is meeting Iris, who is a 54 year old marketing manager from LA living in LV; she's an amateur photographer and she wants to shoot Ash! 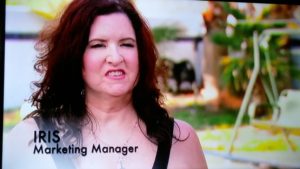 I also want to shoot Ash, but I bet in a WHOLE different way. He has his hair tied back, must be by request, because normally he's working that mane like a part-time job. She's considered the Black Sheep of her family (do you still worry about that in your fifties? Man, I thought for SURE that would be settled by then) due to her artistic nature and she wants to take pictures! She's got a little mini construction set for him to pose in, hard hat and shovels and the like.

Ash has a spectacular physique, like a chiseled Greek god, so I can see how this would be right up his alley. He doesn't seem as attention driven as the rest of our Hos, but pulls it out when necessary. Heh. I said pulls it out, heh, okay never mind, you got it. He started modelling at a really young age in Japan, so he's got some experience.

She takes a bunch of badly proportioned photos; it's almost impossible to take a truly bad picture these days, thanks to technology and the fact that she's taking photos of the aforementioned Greek god, but she manages to make them look weird anyway. Good on ya! See how stumpy she made him look? And he's fairly tall 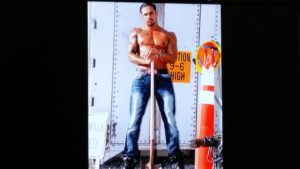 Iris thinks this is a statement of pride for her, women should be doing this more often, going after their own pleasure. I could not be more sex-positive without hurting myself, so while I side-eye banging some random conventionally attractive dude on national TV as empowerment; go getcha sum, sister! Woot, another body type not typically represented in the media, yay! All together, One Love...!

They have cowgirl-sex in the construction site while Ash reminisces about fcuking in Central Park with someone he deeply loved. While being watched by a racoon. Rabies is real, Ash, you shoulda covered your wobbly bits.

Nick and Brace are meeting Al Katrazz of Future Stars of the Wrestling to go over the plan and practice. The wrestling dudes listen to Nick recounting his boyhood dreams of being a pro wrestler, then start laying out reality. It's not a walk in the park and people think that because the outcome is predetermined (allegedly), wrestling is easy. You're still coming off the top rope and landing on someone's face, yo. They give him some coaching tips about how to be a heel, then it's time for the ring work. The ring is nowhere near as padded as people think they are, it makes a lot of noise, but there is a lot of contact as well. He gets some boots and practices stomping, then fake punching and it all looks very hard. Not to mention exhausting, being thrown around like that. Big match on Friday! 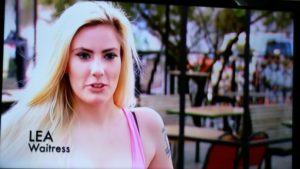 She's so young! And unsure of the path forward. Vin presses, what's the deal? He can tell something is up, with her not being his usual client, and he sense something is off. Ah, she's married, and her husband isn't home much. There's a kind of code on this show, we don't see a lot of women cheating on their partners, probably because A) filming, duh and B) Cowboys4Angels is like the Partylite of paying for sex: they come off as inoffensive splurging. Girl power!

She's really struggling with her absent spouse, lonely and sexually frustrated but not really looking to step out. They talk for what must be hours as the day turns to evening, he eventually talks her out of the wango tango. He doesn't want to be a homewrecker and he doesn't want her to regret this move she's making. So. Does she get her money back?

Friday night Fight Night! Nick The Raptor puts on his makeup and fills us in on his character backstory. I love it when people talk in the third person; it's actually kind of appropriate here! They're riling up the crowd of approximately one dozen (just like Nick's rap showcase!), Ringmaster Brace telling someone "why don't you go home and DIE, Granny??" "Maybe you oughta go back to your trailer park, Granny!!" "Shut your food-stamping eating holes!!" all while wearing a shiny purple satin jacket over sweat. I mean. There's an art to whipping up the crowd, that was more of the sledgehammer approach.

The Raptor faces off against Kid Vegas, a very unsure looking middle aged dude with a mullet AND gut, yayayy. Mullet boy actually lands flat on Nick's face during the fight, DAYUM, Guts! Go easy! Nick pulls it off and wins the match and I'm legit concerned about how excited and pumped Nick is. He and Brace had to pay extra to win as heels, so he knew the fix was in...I guess adrenaline don't curr from realsies or not. He looks like a juiced Criss Angel who's been coloured on with sharpies. 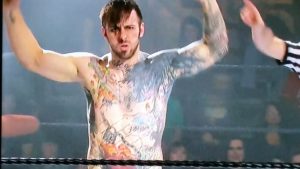 And we're oot! That wasn't a bad episode, would have liked a litttttle more Vin, but them's the breaks. Until next time!