I am fighting a wee bit of an uphill battle for motivation these days, you know what would help? Email me at gingesbecray@gmail.com about your fave awesome shows! I have a line on one (thanks EB!) but I am low on excellent English dramas and needing some fresh stuff. C'mon, it'll be fun!

ANYWAY, let's roll Home Fires, shall we? Smoking 'em while we got 'em!

Last time we got very close to some cuddles for our beleaguered Pat Simms (Claire Rushbrook, who I just saw in Kiri! with Sarah Lancashire!) while her hubs was away, fingers crossed he doesn't make it! Also is dire straights was Frances Barden (Samantha Bond), whose husband was in an unfortunate car accident with his female assistant.

It's 16 June 1940 and the war must be very close now, what with people like Bob Simms (Mark Bazeley) getting hit and everything, well, buck up, maybe he'll die and Pat will get to see her brain or something.

In the meanwhile, we start with Steph Farrow (Clare Calbraith) as always, but this time she's interrupted by soldiers, are they invading?? She looks terrified and isn't letting go of her axe. They go right past her and one looks like Pat's wannabe boyfriend, so I'm not sure.

Pat dutifully goes to the hospital to visit her abusive nightmare of a husband but only gets a glimpse before air raid sirens go off and everyone must go into the shelters.

Sure, ladies, the helmets will help! Interesting that these two rivals for the love of PuddingFace Spencer (Mike Noble) have joined forces to keep communication flowing in Great Paxford.

Also not in the shelter is Frances, whose sister Sarah Collingborne (Ruth Gemmell) is almost frantic in her efforts to bring her to safety.

Frances will not go, the woman who died traveling with her husband is being buried today and she will not go! Sarah has no choice but to join her.

Laura Campbell (Leila Mimmack) is listening to the sounds of planes overhead from the shelter, but it's women reading the paper and glaring at her that have her full attention. She's the Other Woman in a nasty divorce with her former Commanding Officer, perhaps that's hit the news.

Local teacher Teresa Fenchurch (Leanne Best) asks if she'll be coming to the schoolhouse as promised? Sure sure but Laura's still staring back at the women clearly gossiping about her.

Jenny compliments Claire on her cool head during the raid and does everything she can do to imply that she threw Spencer over for Claire to pick up as leavings and suuuuuure, Jenny. That's how it went.

Laura races home to see it's just as bad as she fears, she's been named in the paper as the Other Woman and life in town is about to get that much more uncomfortable.

Heeey Stan Farrow (Chris Coghill) made it back and he is looking foine! I'm as happy to see him as Steph is!

Pat goes back to the hospital, oh hai Bob you arsehole. Then he wants her to hold his hand, Pat and I weren't sure if he was going to do something violent so we were slightly perplexed.

Little Stan Farrow (Brian Fletcher), seriously dude, get a new nickname, is ecstatic to see his dad! Almost as happy I am to see dishy Nick Lucas (Mark Umbers) stopping by to see Sarah. Sarah's husband Adam (the excellent Mark Bonnar) has been taking captive and we're all trying very hard to not be receptive to Nick's smoldery advances.

Personally, I'm positive that I wouldn't be able to get a full sentence out around Nick Lucas, he's just TOO good looking. How do you suppose the actor deals with that? Carries a pillow for when people swoon and a small tazer in case they get handsy?

Steph and Stan have a great and breathy welcome home, she wakes to find him searching drawers for papers. He's fully engaged in this war and canea pull his head out to sleep for even one night.

It's the day of Peter's interment, Frances is drawn but calm. Even our old pal Joyce Cameron (Francesca Annis) and her rude husband are in town for it.

Oh but there's something going on with the will. Peter left 80% of his business interests to Frances, but held 20% back for a trust whose recipient will not be disclosed.

I swear to all that is holy, if Peter had a lovechild with that woman whose work he "admired so greatly"...

Okay, so I'm going through a divorce right now, but I'm pretty sure none of that is bleeding through to my recaps.

Oh and Joyce has moved back entirely! And without her husband, who IS a total jerk, bai Douglas (Paul Antony-Barber).

Stan is loading his fields with barbed wire and all kinds of other terrible things to keep people at bay, I don't imagine the cows like it much but it's a new tactic.

Ahh Pat looks so happy heading off to a picnic with her illicit hopefully-lover Marek Novotny (Alexandre Willaume), she barely even falters when Alison Scotlock (Fenella Woolgar) asks her to say hi to Bob at the hospital.

Marek has sussed out how selfish Bob is already, I offer three of my ambulatory limbs to get Pat some "cuddles." Pat maybe wished Bob would die and I'm pretty sure we're all STILL hoping that, Pat.

Joyce finds Frances sitting by the water and offers her condolences. Her situation is "in a state of flux." They talk about Peter and we watch Frances cry, it's funny how old enemies can turn into your strongest allies. Because maybe you were at war with each other, and on opposite sides, but at least you both know there was a war and all the destruction it caused and sometimes: that means more than what you were fighting about.

Laura's dad Dr. Will Campbell (Ed Stoppard) is following up on treating his lung cancer, but I'm afeared he's in for a bit of a shock if he thinks he can keep working the whole time.

It's time for a meeting at the Women's Institute, Erica Campbell (Frances Grey) is the first to welcome Joyce back.

Oh ho but a leopard doesn't change its spots either, Joyce is barely sat down before she's gunning for the President's role that Frances hasn't been able to return to yet.

Well. Joyce was president previously, it's just that she's such an underhanded, excluding bastage; better not to risk it.

Ohh but she's not suggesting herself, no no no, but rather Pat. Who can't do it because of Bob, so Sarah throws Joyce into the pot.

I'm so sure that wasn't Joyce's plan.

In the short term, right ladies?

Frances and Pat have a look at Peter's factory, she almost falls over at the sight of his desk. There are quite a lot of accounts to go through.

Bob's back to his usual self, chiding Pat for not bringing him chocolate (she saved it for her and Marek!) or coming earlier, blah blah blah violent misogynist says what? He sure doesn't like it when she lights another soldier's cigarette before him but I don't think he can hurt her with the IV in.

There's a showdown in the butcher shoppe, Mrs. Talbot (Phillipa Peak) minces no words talking to the air directly next to Laura's ear about how disgusting and shameless she is. Miriam Brindsley (Claire Price) won't have any of that in her shop, thankyouverymuch, how would she like to have her past mistakes aired out in the local paper?

Brynn (Daniel Ryan) smiles proudly in the back.

Alison is going through the accounts for Frances, she can't find anything that looks like a debt to be repaid or a reason for the 20 percent share.

Dr. Campbell can't figure out why he's not got any patients waiting, where is everyone? Ah but 8 of them have transferred their records to Dr. Clark across town, you know, the one without the daughter in the papers for scandalous behaviour.

Jenny takes down an interesting message from an RAF captain, something about needing an office helper? We know Jenny likes a man in and out of uniform!

Miriam has a special delivery from Brynn's mom, it's baby clothes! She's pregnant and really only focused on their missing son David and doesn't want these things, Brynn! She wants to quietly obsess!

Ohhhhh, Bob can't do stairs for a long time so the bed will have to be moved into the study and hey, Marek is there to help her move stuff!

Stan Farrow's very close to having lost the plot, yes? Searching for weapons to hide and slightly manic.

Ohhh Pat gets some kisses but decides not to seal the deal on her husband's newly moved bed. FINE. Sure be a shame if Bob took sepsis in the hospital.

Looks like Jenny's taking over Laura's old role, watch out for the commanding officers! Something tells me she's absolutely watching out for them already.

We're not done with the poisonous Mrs. Talbot yet, she shows up at school where Laura's been volunteering to spit venom and push Tom (Rob Heaps) away from the harlot, what's her deal, man? Tom's still game, he quite likes Laura but Laura doesn't want his reputation damaged as hers is and gives him up for the Greater Good.

The Greater Good can also look a lot like fear and / or pain.

Alison has found something hinky after all, there are a series of cheques made out to Peter's deceased bookkeeper / traveling companion Helen that haven't been cashed.

I have a tenner on lovechild.

Will has an awful spill at work, he's losing his balance and his faith at the same speed. What will his family do when he's gone?

Frances goes through Peter's personal effects, finding a beautiful necklace and note that we just know is going to say... 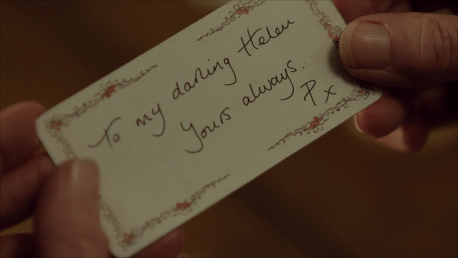 It's Love, Actually all over again.