Hello everyone and welcome back to the Top Chef Colorado kitchens! We're in the Top 5, you guys, can you feel it?? I have one fave left standing, let's see how far he gets. Rolling S15:E10 after the break!

The cheftestants are all reeling in the aftermath of some terrible feedback from head chef Tom Colicchio, Denver native Carrie Baird and Amish soulfood chef Chris Scott took the W and are headed to the Superbowl but everyone else looks bummmmed.

Chris wants to have the first soulfood restaurant with a Michelin star, godspeed my friend!

Bruce Kalman may know everyone and seem like the natural for Top Chef but he's starting to doubt himself as none of his latest dishes have gone very far. Young Joe Sasto III is also trying to figure out what went wrong, he's been in the bottom over and over lately.

Back at the Top Chef mansion, Adrienne Cheatham is reviewing her list of critiques and she needs to step up or get oot. I still have no idea what she stands for, other than undersalting fish, but she's been lucky that other chefs have bombed more than she has thus far. Obviously she's coasting Top Chef-style, which is still AMAZING, but I have no idea of her food.

Carrie calls her dad, she talks to him every day. Really? Every day? She was her dad's boy (fishing, hunting) when he had three girls but this is not your traditional Mormon background. Well. It might be now, when I was involved with people that were Latter Day Sainting, you never saw divorce and I didn't realise her dad was old enough to show signs of Alzheimer's. Not cool, Carrie, I'm sorry, call your dad whenever you want.

The chefs head out, but not to where they thought: they're going to The Stanley, where Stephen King was inspired to write The Shining.

Quickfire Challenge is: create a dish based on Stephen King's nightmare which inspired The Shining. That makes no sense. Redrum Dessert? Something bloody? Yuck 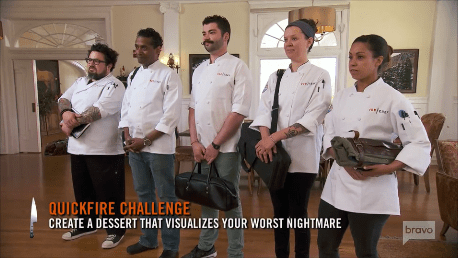 Carrie has a lot of dreams and now she's going to tell us one but NAH NAH NAH NAH I CAN'T HEAR YOU. People who want to talk about their dreams or write them down and analyse them: nooooope.

This is another Craftsy challenge, does that mean moola?

Side note: I really liked Stephen King until I turned 16. By that time I'd read everything I needed to know about "shit-eating grins", Derry, Maine and becoz: aliens. Still like The Stand and Firestarter!

Adrienne has a background in pastry, can't wait to see!

Ohmigod they're all going to talk about their dreams. Joe Sasto is next and brings up bloody yolks. Chris used to be known as Dr. Chocolate and so is making himself in effigy? Bruce makes up a story about being afraid of seeds because

Why would that be the story you sell? I can think of ten stories right now about things I was afraid of as a kid: 1) basements 2) clowns 3) dead people (this was pre-zombie) 4) dogs 5) drowning 6) I CAN DO THIS ALL NIGHT.

He's making panna cotta, using powdered gelatin instead of sheets, without any awareness of the proportions.

Host Padma Lakshmi tells us how she totes believes in ghosts, ehhh.

And Bruce is cratering

And his dish looks... 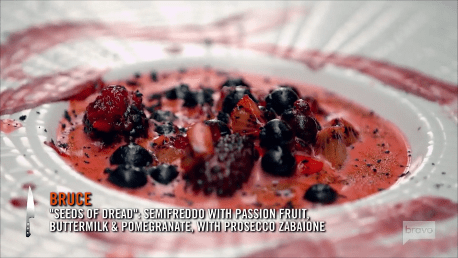 So much splattered red stuff! I'm a woman, so I'm getting a little queasy

A big story from Chris 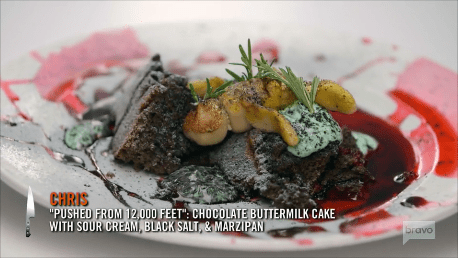 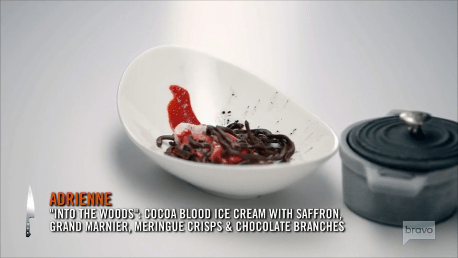 Carrie's went the other way, her panna cotta had too much gelatin but the real problem is that she ran our of time and got only one thing on the plate of the four she made.

Bruce and Carrie are in the bottom, course, everyone else was in the top. Chris and his dead hiker takes the plate, yay! I am so happy for him. Craftsy kicks in $5,000 because that's what they do. That and crafty stuff.

This week the elimination challenge is to illustrate the chef's Top Chef journey to where they are now, then they will cook for the Governor, which makes Carrie squee and jump up and down.

Whole Foods time! Joe reflects on his critiques, Chef Keegan stuck out the most for him. Keegan read him for using too many techniques, it really helped him focus.

For the record: Joe's spent most of the time on the bottom after that.

Bruce is NOT making pasta, which means he's also been finally listening to critiques. Adrienne didn't feel connected to the food she made previously, so now she's making monkfish tail. OKAY

Tom is waiting for them back at the kitchen, freaking everyone out. He have them some harsh words last time and he's there to reinforce: he is not impressed. Shape up or he'll bring TWO people back from Last Chance Kitchen.

Sorry, by that I mean ALL THE PRESSURE.

Joe is doing another stuffed pasta, Adrienne is making fish again. Don't forget the salt! Carrie is making an elk tenderloin, she's felt her confidence grow over the season.

Chris is making me cry with his story; he's making a ravioli dedicated to all the chefs in this season because he wants to show them how he feels about them. He hasn't made pasta this way, what??!! This is for the finals, boo!

This is the last time in the Top Chef kitchen before the finals!

One final game of pool and they're off to the Governor's mansion and it's tiny, tiny kitchen. Hey Governor Hickenlooper with the best name ever! 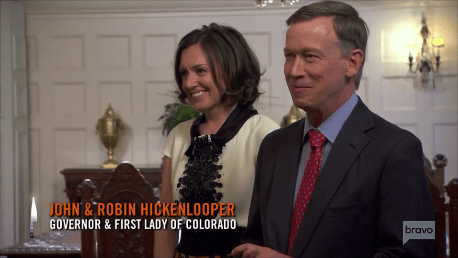 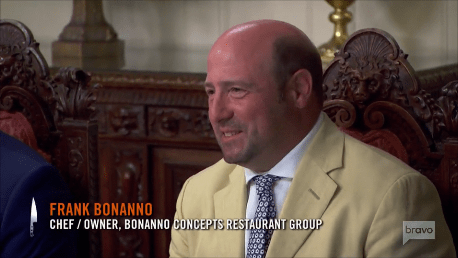 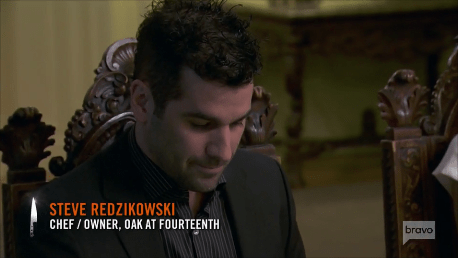 Graham Elliot has also joined us, I hope Gail Simmons is enjoying her week off. NOW the food! 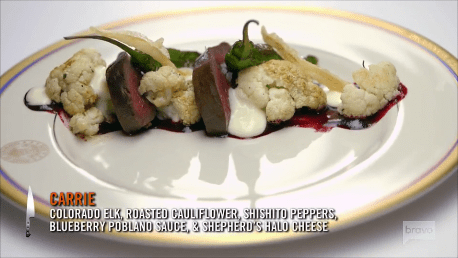 Carrie sucks up in a condescending manner, but her dish is very flavourful.

Bruce rides the struggle bus to the table 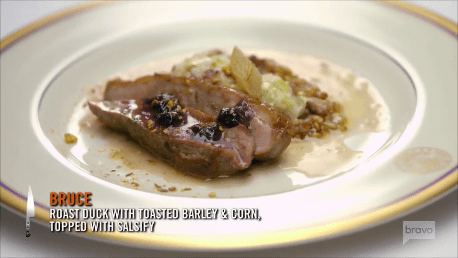 And finally: Chris who is worried about the skin on his trout, when really the ravioli he's never made before is the real problem. 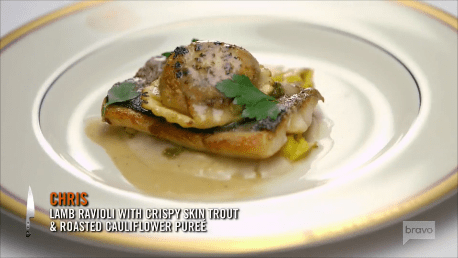 Chris and Bruce are in trouble. Both of their dishes were no bueno.

Carrie, Adrienne and Joe are in the top, which we knew. Joe gets the win with his perfect pasta dish.

Now we find out which fella we're losing and it's going to be really sad either way. If Bruce leaves, he'll go home to his brand new bebeh but Chris is hard on himself. Almost as hard as this guy is on him.

Oh but it's our squished Bruce Kalman who is sent home for technical errors. Go kiss the bebeh!! Or Last Chance Kitchen THEN Telluride THEN kiss the bebeh!

ps: how do you guys feel about conspiracy theories in general? I was thinking, we see a lot of food trends debut on this show and I'm wondering if they are...guided. This season is all about beets, Joe even said he was trying to work beets into his recipes and why would he do that unless told to do so? Just wondering if anyone else noticed that? Cheers!