Hi guys! There's no Below Deck this week so I getta get at Invite Only Cabo even sooner, yay! Let's roll S1:E7 Undercover Lover after the break.

We open with Bianca Banks talking to her twinsie daughter Jasmine; I have no idea how anyone thinks this woman is old enough to have a grown child. Are we sure she's the mother?

Kamani Alana took a minute and has decided to stay; she just needed to breathe and realise that it's only her thinking she's humiliated. Although Agu Ukaogo and she were talking about dating; him trying to shake hands with Emily Moses' vagina just says stuff about him, not Kamani.

I knew Agu was just for funzies you guys! Whatever turns the key; a bad boy for some and a relationship guy for another, as long as he hits it over the fence. It's okay, Agu, I got you.

Emily bites the bullet and asks Agu what they got up to that fateful night, she wants to tell Joseph everything.

Emily cries; that seems like a LOT for a couple of minutes, wasted or not. Personally, and you can tell me to shut up if you like (LALALALALA CAN'T HEAR YOU), the real problem is everything that happened after that night. Yeah a drunken blackout hookup is one thing, texting the dude constantly and trying to hook up on subsequent nights is completely different. Emily just wants to be able to be as specific as possible with her boyfriend Joseph, er. Is that a good idea? 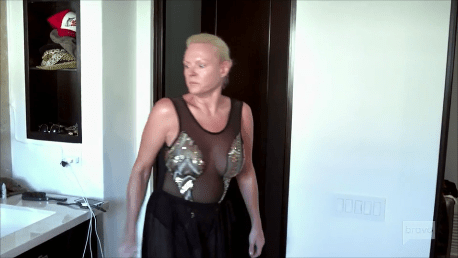 Bianca's got host Larry Sims alone and she takes the opportunity to ask about this "love interest" Jermane Britton brought up the other night.

I love how they're so carefully gender neutral, like we're not supposed to know Larry is totally dating a dude.

Jermane himself and Malaku Quisada wander into the kitchen just then, great timing! Larry gets right to the RuVeal, Corey is someone he's been dating for over a year and he totally has Larry's heart. Larry dates across the spectrum; he just doesn't like to lay it out for people and that's his right. Love is love!

Bianca knew about Larry and Corey, she just didn't realise it was Serious serious.

Not so funny is Emily calling Joseph with her confessions; his response is peppered with "I hate you" and "f*ck off" but it's the ultimatum that she never speak to Agu again that brings her head up. She will not allow anyone to dictate how she acts and exists; she can barely control herself: she's gonna let him do it?

So that was awkward.

Emily catches Larry up on what's shaking; she doesn't want to get blackout blowjobby drunk again, but she wants the rest of the trip to be fun and light, not so much DRAMUH.

Supper time! Jermane is still pouting a bit; he and Kamani were the only ones in the dark about Corey, maybe that's because they're his oldest friends.

Agu's swimming naked in the infinity pool again; Bianca and I are transfixed. "That's a good booty!"

Agu figures Kamani might have cooled off by the next morning and at least she's willing to talk to him, so he's not all wrong. Agu apologizes for a bit while Kamani sits, arms crossed, telling him exactly how he messed up and after a couple of minutes, Agu and I are done.

I mean, they weren't dating. They weren't ANYTHING, they hadn't even kissed!

Ohhh but Agu you definitely should not have said that you wouldn't have messed with Emily if Kamani had been a little more forthcoming with the affection.

Because while maybe it's true, no woman owes you affection. You like someone, you wait to kiss HER. You don't say; well, looks like this ship has run aground for the night so I'll go see if I can board some other booty. HOWEVER. If she liked him back, it's like a game that she wouldn't kiss him or touch him or anything. Games are no bueno.

Jermane is Larry's OLDEST FRIEND, nobody shall pass the Sims gate without his approval!

Larry breaks down his relationship with Corey for us; they dated long distance, but when Corey moved to LA, he was a huge slut and Larry kicked him to the kerb. Now Corey is ready for a relationship and Larry's putting him back up to bat.

A whole afternoon and evening in the pool later; Corey is (drunkenly?) holding forth about wanting to know Larry's Top Five friends ONLY while Jermane listens intently from the dry side of the swimup bar.

We definitely need a drinking game for Invite Only Cabo.

Jermane strides off shouting "YOUR APPLICATION IS BEING PROCESSED" while Larry decides he needs a little facetime.

They're so cute together!! That was so a "I missed you and I don't care who's watching!" kiss.

Dinner time! Jermane is shouting out the time in five minute increments but it's Kamani holding everyone up. Emily makes a snide comment about her making it down the stairs and EVERYONE freezes.

No! No! Also: Corey is ADORABLE all dressed up in date flannel! Kamani finally makes it down, Emily sniping comments left and right. "Oh so I'm the problem in this house" and making me laugh with her not understanding why it takes three hours to put no clothes on, hahaha.

Gurl, you just said you wanted to have fun and be light; picking yet another fight with Kamani is not that.

Emily continues on bitching in the car with Jermane, Agu and Malaku but Corey and Larry are putting on a show in the other. "Kiss me like you love me" awwwwww! But Corey's schwasted.

And then everybody is crying because Corey drops the L word on Larry and even though he's loaded, it's awesome. Larry has only told two people in his life that he loved them and when he said it to Corey: Corey didn't say it back. That's a toughie.

Now we're at the club celebrating Corey's birthday but it's kind of...listless? Plus Emily spends the whole time badmouthing Kamani; she's so jealous that Agu and Kamani are speaking that she's practically pooping green.

They leave when Corey is about to pass out and the car ride home..

You know when you think someone is really attractive at first then you dig a little deeper, getting to know them, maybe you see a little flash here or there that brings your ears up but then you get smacked full in the face with a red flag? That's what Agu telling Emily to "learn to shut the f*ck up" did for me. Emily wouldn't stop yapping about Kamani; it's pretty obvious that it's based in jealousy but Agu goes OFF and blames everything that happened on Emily, ending with a sarcastic "but you don't remember." A "shut your f*cking mouth" on the way into the house seals the deal.

You can just lose my number, Agu, okay? Kthxbai

Emily doesn't even know this Agu, she just wants to disappear.

Larry puts Corey to bed (you know I checked it there was a puke bucket and if he was on his side - no to both) and finds the gang (sans Emily) out by the pool talking shit about Ems. He's DONE. He wanted to have a nice little vacation with his friends and he's all done trying to fix "grown people's problems." AMEN

He's not done, though, he's gotta wander around in the dark screaming how DONE he is, jumping on the tennis court, shouting by the cliffs, DONE DONE DONE!!

That was slightly disturbing, you guys. I can't believe Agu's taking a turn verbally smacking around the household punching bag. He clearly values Kamani more than Emily, he would NEVER talk to Kamani like that and that hurts my heart for Emily. Because I'm worried she's willing to give up her relationship with Joseph because she's vibing with Agu. Plus Joseph couldn't have been that serious, ya know?

I'm afeared Larry is in for a rude awakening when his young fella wakes up; that was the most drunkenest I Love You ever but it touched Larry in places he doesn't expose all that often.

I know Larry is The Guy on here and vaguely that he does something with hair, but what I really like about Larry Sims is that he is super straightforward and just so rational. You never hear people talk truth on reality shows, unless they're gonna beat someone with it like a hammer *cough Kamani cough* and he's consistently kept it real. For example: asking Kamani if she really thought Agu was The Guy after what he and Emily did the first night; you never see that kind of clear thinking on shows like this and I DIG it.

Next week is the season finale, though, which means that I might be stuck loving a show that only gets a halfrun like Workout New York and Apres Ski, but I'll keep my fingers crossed! Until next time!