Hi everyone, welcome back to Ordinary Lies season one! It's the penultimate episode and tonight we find out what's happening in the Sales Pit! Rolling S1:E5 after the break.

There's Marty (Jason Manford) and Pete (Mackenzie Crook) doing well, but Jason (George Bukhari): not so much. He's getting a lot of "we'll sleep on it"s and "we'll call you!"s.

Jason was the salesman of the year last two years running, though, what happened? We have to wonder if it has anything to do with the physical pain he's always in.

Jason figures he's got a couple of live ones on the hook; two gentlemen want to take out two separate flash cars so he enlists Pete's help. Er, Jase, these guys look like thugs, not guys with more money than sense. Pete recognises the dudes, so they grab keys and head out.

I'm so right, woo hoo, er-ooh sorry Jason and Pete. They get beat to shite on the side of the road and the two thugs are off with the Land Rover and Audi. Poor Pete takes the worst of it, but they're both bleeding and in pain while Marty tries to reach them on their discarded mobiles.

He raises the alarm with Mike (Max Beesley) who immediately suggests the police, then he's off to the hospital; Jason and Pete managed to get a ride.

Jeezum crow, Pete's been right bashed! The only thing is: he would have had to be at this hospital today anyway: something to do with a baby...he and his wife lost the past four, so it's all a bit..time for statements with the police.

DS Kaufman (Philip Bullcock) is Bad Cop; DC Trott (Brian Darwin Taylor) is Quiet Cop and neither one understands why Jason didn't think it was odd that the customer stopped for a pee in the middle of a test drive.

Kaufman's at Mike now, he wants all the names of previous and current employees for the last two years, including information on the one who just left. Oh but Rick (Shazad Latif) left for entirely different reasons, boss, trust Mike. But a gang hit like this wouldn't happen unless they had inside information, so they will need to check out everyone. Huh.

Beth (Jo Joyner) is still getting hangup calls; it it her missing husband Dave? Or her lover's wife?

Pete calls his wife (sorry no name yet!) to warn her about his face then heads over to look at their baby onscreen during an ultrasound. She cries, she wants this baby so much. I am worried because Pete clearly has something else weighing on his mind. 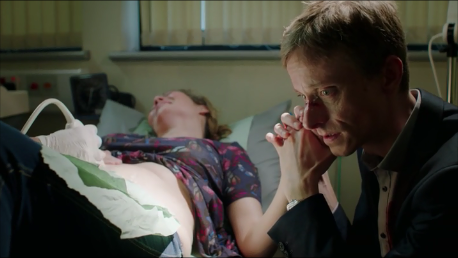 He's at his Gambler's Anonymous meeting after; making eye contact with dishy Kyle (Kevin Sutton) who set up the robbery. Huh. I'd JUST been thinking that it must be Jason who set that up because Pete got hurt too badly. He didn't even get his money yet, pfft.

Marty's got his eye on Jason too, always banged up and creeping into corners to make phone calls. He goes as far as to tell Mike about his suspicions of Jason; Mike is openly skeptical but you know the policeman's words have to be ringing in his melon.

Pete stares at some overdue bills then heads off to see his son Sam (Jake Hanson) across town, whose mother Marie (Olivia Swanson) isn't impressed with what she gets but his kiddo is ecstatic to see his dad. Does...Pete's current wife Vanessa (Jayne Ashbourne) know he has a child already?

An awesome day of play later, Pete's asking questions about Marie's boyfriend Lloyd (Darren Connolly), is he trying to Dad? *tiny English boy voice* "But you're my dad and he's not, so no biggie." He sees Pete eye up the cheque; are they going to "do a runner" like Lloyd does?

I was just wondering again about whether Vanessa knows about his son; Pete throwing away all evidence of the day says probably no. Huh.

He spends the next morning establishing how bleak his financial situation is; call after call to collection agencies yields nothing but some heartburn and asthma flutter. He's distracted by the police pulling up; they're in to talk to Mike and Marty goes straight for Jason.

Marty grabs Pete and follows Jason into the bathroom, forcing him to remove a fancy cravat he's been wearing to class up the joint. There are several welts around his neck; has he been strangled? Is he into auto-erotic asphyxiation?

I'm concerned that I was able to spell that without spellcheck.

The police want to ask Jason questions of exactly that sort as well; Pete yells out that Jason didn't have anything to do with it as Jason is led away, but nobody is listening.

He waits for Jason at the police station, guilt personified in a two piece suit. Jason doesn't talk until they get into the car but breaks down in tears as soon as the doors are closed. He said it out loud for the first time and it's made it unbearably real for him now: his girlfriend Hannah (Emily Boardman) has been hurting him. He's being physically abused and all I can think is that there are so much fewer resources for male victims of domestic violence.

Vanessa calls and breaks up the moment; she's so very stressed about this baby. And if she loses her fifth baby in a row, she thinks she will die.

Jason goes looking for a tissue to mop up his face and instead finds all the letters of overdue accounts in Pete's glovebox.

Beth and Mike still aren't sure what they're going to do, but Beth should probably stop getting her mother-in-law Gina (Ellie Haddington) to babysit while she's out schtupping her married lover. Poor form, Beth.

Gina doesn't want to give up on the chance that disappeared Dave is still alive; maybe he's been the one making all the hangup calls! Gina leaves with a "SOME OF US DON'T GIVE UP SO EASILY!"

Lloyd shown up at Pete's house, causing Pete to go apoplectic but it does solve the main question I had above. Marie is not Pete's former spouse; she's someone Pete had a fling with and impregnated when he and Vanessa were having a hard time because she kept miscarrying.

Pete's on the brink now; not only will he not get to see his boy if he doesn't pay up, they'll tell his extremely fragile wife everything and that's almost homicidal. Kyle is no help at Gamblers Anonymous; Pete is well and truly stuck.

The police are back; now they want to talk to Pete. Why did he lie about seeing those two gentlemen previously? Pete admits to lying; he wanted to help Jason out with a sale. But why lie to the police as well? DS Kaufman is confused.

Pete ends the week and heads over to see his kiddo...who isn't there. Ah Marie. That's not okay.

He comes back home to find his oblivious wife has supper served; he loses his temper when Marie texts tauntingly. I don't understand these partners who have no idea everything is going to shite. I used to watch the ID Channel (aka The Kill Your Wife Channel); the two main triggers for men to kill their wives were A) a baby on the way and B) lying about their financial standing and things about to come to a head. I'd much rather know we were broke then fend off an axe to the head, thank you very much.

Vanessa is extremely fragile, though she's trying to keep calm for the baby she's visibly distressed at Pete snapping and shouting about Marie playing games.She hopes he's not gambling again.

There's a big party over at Beth's house; it's Dave's 40th birthday! His mom's speech; "WE ALL WANT HIM BACK" directed only at Beth sets the tone but Dave's brother Jonney (Sebastian Shaw) is totally okay with Beth dating someone else.

They smoke out in the rain and I want rain so badly I can almost TASTE it. Ohhhhh, it's her mother-in-law that's been doing the hangup phone calls; just wanting to keep her daughter-in-law believing and on hold for her son, whenever he comes back around.

I've known some pretty terrible mother-in-laws in my day but that takes the cake.

She sends a text to Mike; she's decided there's no more point in waiting: time for them to move forward.

Pete digs out the invite to Sam's school presentation that he couldn't bear to throw away; he makes it in time for the show and aww, it's so cute. He almost gets to see Sam but Marie sees him and pulls Sam back hard. Yikes.

Marie and Lloyd make a special trip to see Pete on the sales lot; she has his voicemail from that frantic day, it'll be to Vanessa by the end of the week if he doesn't hand over his money.

She's just not listening; she can't legally not allow him to see his child and if she forces this issue with his wife, he'll have THREE households to pay for and even less money to go around.

He takes out all of his money and heads to the casino. He loses it all.

Pete's back on the lot and it's time for a Come to Jeebus Meeting with Jason. He's noticed everything in the past few days and now he's gonna help Pete with a little truth serum. Jason challenges Pete about the robbery; he knows Pete knew and set things up to alleviate his mounting debt. Jason is finally dealing with his problem in the form of his abusive partner; he suggests Pete does as well because truth will out. It always does.

It's as I said on Home Fires: once the Freedom Machine has been set in motion it doesn't stop.

Pete's not really listening, it's all white noise until his phone rings. It's Vanessa and she's terrified: she's had bleeding. They meet at the hospital, we all hold our breath until we hear the heartbeat, don't we? Baby is fine! And that's what's important; you can see Pete make up his mind.

He sneaks outside to make a call; it's to Marie to let her know there will be no more extortion, he'll be telling Vanessa everything today. He'll also be seeing a solicitor to get his parental rights: Sam is his son and she won't be allowed to keep him away any longer.

He re-enters the hospital to see beautiful, tearful Vanessa: he soaks it in like a drink before the war because EVERYTHING is about to change. And we're out.