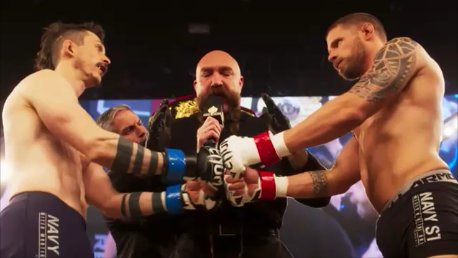 Things were heating up last we saw our Fellas of the Cage on Kingdom, will the Jay / Ryan fight end a friendship or a knee? Is Alvey gonna make it through this? Is Christina? Do NOT get my started on Nate! Let's roll S2:E13 Woke Up Lonely and find out. This is a 14A recap!

We open with Alvey (Frank Grillo) in therapy, talking about what his life has become: a cycle of getting drunk, waking up fcked up, protein shaking it, then working out until he pukes so he can get through a day and get fcked up again. Twice a week he comes and spews it all over disguy, he's an emotional stripper.

It's not the same at the gym without Lisa (Kiele Sanchez) but he doesn't know what it's gonna be like when she comes back. If she comes back. Everyone keeps thinking he knows what to do, they keep looking to him.

He scrimmages with another guy who must be a real fighter; Frank Grillo could easily pass, I'm telling you.

This is the story we don't hear so much; what does a guy do when he can't accept his body getting older, his friends falling away or dying and his family disintegrating? His baby-to-be with Lisa dying seemed like the end of his hope, but they were over before that. And so was Chapas, his friend who killed himself in front of Alvey. Man's got a lot on his mind and he does not know how to deal. So he fights and he sweats and he drinks and he pukes.

Alicia's sister Ava (Lina Esco) is woken up by the sounds of construction in the gym, that's it, she's checking into a hotel! The fight is tonight and she's gonna book a suite so they can have an afterparty and somebody else can clean up after.

Nate Kulina (Nick Jonas) must be cornering for Jay for the fight, he's got a checklist and a caddy for all the things he needs for tonight: q tips, butterfly bandages, you know, the usual. Jay (Jonathan Tucker) calls him from inside. Inside the washroom, that is and I don't get the fascination with watching people on the can.

They have to stop and grab Christina (Joanna Going) on the way, she's got a special (screwing your therapist) pass to be out late. Ooop, not done pooping after all! Privacy.

Ohh, privacy to text Ava, who's down for whatever.

THREE TIMES it takes Keith (Paul Walter Hauser) to understand how to enter Ryan Wheeler's (Matt Lauria) room: three times! First the knocking, then the waiting, THEN the steel cut oats for Ryan on fight day. Ryan's impossible on fight day, but I kind of love his cut days because that's when he really loses his mind.

Alvey's finally talking about Sean Chapas, but it's in a police interview room and they're asking about the investment he made with Sean, so that's probably not good. Detective Poole (Kamar de los Reyes) swears he isn't interrogating Alvey, he's just trying to figure out why Chapas used Alvey's gun to kill himself and why Alvey reported the gun missing the day after. Alvey asks about taking his gun after, but not his old friend's remains, which nobody has claimed.

At Navy St. Shelby (Juliette Jackson) brings in coffee and bad news: Alvey's being sued by that cyclist he doored the other day. No time for that on fight day!

Christina is cornered in a completely different way by her therapist Jason (Billy Lush - he has such unusually proportioned features) who I can't quite get a handle on. I'm sure she was sleeping with him for extra privileges because that's her usual currency, but did he lead this charge? He's a newlywed and I thought of him as the victim, truly, until he got overly aggressive with her in her room and made her feel unsafe. She did tell him no, and he went, but I'm having trouble sorting out who is the problem here. I think it might be both of them, although ultimately he is at fault because he is in a position of authority over her and he broke the number one rule of being a therapist: don't screw your patients.

ANYWAY, she wants him to just leave her alone, please. She's got a week left. Just stop, Jason.

You see how Kingdom gets...complicated.

Ryan's not in the mood to talk to Alicia, either, who he fought with last time they saw each other the night he broke his knee.

Jason's decided to deal with his heartbreak over Christina by flexing his privilege, he's in charge so he can walk into her room whenever he wants, when she's dressing or otherwise. He threatens to not let her go to the fight, he's just treating her like everyone else, because that's what she wanted!

I laughed out loud when Christina said exactly what I was thinking:

She has to push back hard: she'll go to the fight as he already said she could or she will burn everything down.

Things are getting out of control in rehab.

Ava has booked a really nice suite for fight night, I'm worried about all the beige in the room. It's almost impossible to get blood out of beige linen.

Jay and Nate pick up Christina and Alvey negotiates at the arena with a very excited Garo (Bryan Callen).

Garo's not just there for comic relief this time, he helps "haggard" looking Alvey with his lawsuit, hooking him up with his lawyer Foxy Roxy. Sigh. Alvey let his insurance lapse and the cyclist is looking for $500k. Yikes.

The fighters get ready; Jay chilling with a picture of Ava's bewb while Ryan tries not to lose his mind as he usually does before a fight. The pre-fight commentators speculate on whether a fighter will leave Navy St. after, I hadn't really thought of that but it makes sense.

Ava and Alicia hit the bar where Alvey is bemoaning the lack of hard liquor, Ava heads off to see Jay and Alvey and Alicia go across the street for a real drink. Dose two together...She's been waiting.

Ava introduces herself to Christina and ignores her caution about bothering Jay's zen and wakes him up. IS THIS FORESHADOWING?

He's the toughest bastage in there and he definitely has the biggest heart, but Ryan has the bigger everything else, including reach.

Alicia brings up Lisa losing the baby right away, she's sorry. Alvey is visibly discomfited that their loss is common knowledge, but they talk about it a little. He tells her to focus on what she's doing, her life is about to change. Keep doing what she's doing and she better be ready: it's all coming, Lisa involved or not.

Nate gives Jay the inside scoop on Ryan's knee before the fight: they are brothers, yo. Bros before...brothers from other mothers? I dunno! Jay doesn't want that information, he's gotta think of Ryan as invincible right now.

This fight is such a bad idea!

Alvey and Alicia bond some more; he asks how fcked up her and Ava's father was, he can tell by looking at Alicia's little sister that something happened. Their mom died from breast cancer when they were little and then their dad went to prison for raping one of Ava's friends, so yeah: not a great childhood. Alvey makes sure Alicia knows she's welcome always at Navy St., she's part of the family and he loves her. Hm. I don't know if Alicia took that in the family way coz her face went funny after.

I'M WORRIED ABOUT JAY!! He's so much littler and he just did that cut to get down to the lower fight class, I DUNNO!!

Plus I'm not watching the fight, I'll be like Alvey, across the street waiting for a text to see who won.

Ryan gets first blood with those long fecking arms and legs but Jay gets some good licks in and everyone makes it through the first round.

Round Two: Jay doesn't do too badly, this was memorable

But then Jay's caught and he taps but Ryan doesn't let go. But then the bell and the fight isn't over? I SAW JAY TAP.

Maybe there's an intricacy I don't understand as I usually watch through my fingers.

In the corner, Nate repeats over and over: "f*ck your conscience", Jay's gotta sweep that leg if he wants to not get kilt.

Round Three and Jay goes for the knee and suddenly has got Ryan around the neck with his legs; tap or he'll break it, Ryan! The crowd chants along and then...Ryan passes out and Jay's won.

Jay bobs back and forth inside the cage until Ryan comes to, furious.

Ava's happy, but Alicia isn't. Now Jay has two belts and Ryan has none.

Alvey gets the text: he's happy his son won, but also: his best fighter just lost his belt and probably won't be at his gym any more, so.

Ryan limps home, tended to by a tearful Keith who's gonna order a pizza, 'kay? It's not much more fun at Jay's party, he's just been staring at Alicia the whole time and smoking. I think he feels guilty. He thinks all everyone is gonna talk about is Ryan's knee and that's why he won.

Jay's not picking up Alvey's calls; maybe Alvey shoulda cornered his son, he figures? Alvey's seeing his best fighter in person anyway, reassuring him about upcoming fights but all Ryan wants to talk about is Jay going for his leg.

Now. Yeah, Nate found out that Ryan's knee wasn't the best that last day, but they were all at that party when you lost your shite and broke your knee in the first place, Ryan the Destroyer.

Alvey gives Ryan two days to get over this funk, then they're back at it harder than ever. Ryan lays down the gauntlet: Alvey should have been in his corner tonight and if he wants to be his coach, he will be next time, whether Ryan's fighting his son or not.

Jay blows some rails while listening to his dad's message then turns to see Ava all slinky in grey lingerie. Did she buy that for him? No, but she's wearing it for you, so suck it up, Champ. They throw down while Ryan reads in bed alone.

Oh but not alone for long, Alicia's come to see him and I'm glad they make up. They were good together.

Ohhh no, Jason the Terrible Therapist is drunk and carrying a phallic-shaped award as he accosts Christina in the kitchen after she gets back from the fight. She bids him goodnight in the kitchen but he follows her to her room where he attacks and tries to rape her. He's choking her with the sash of her robe but he can't achieve an erection, so after he flops off (and we start breathing again), he cries and says "I didn't rape you! I didn't penetrate you so I didn't rape you!"

It's almost as though he's saying it to himself, okay, he isn't THAT far gone but Christina and I can't even believe he's trying to reassure himself right now. She stares and then clocks him across the head twice with that heavy, phallic glass award.

And we're out. TOO MANY FIGHTS. Cheers