Hi everyone, welcome back to Line of Duty where everything is either big and sexy or completely bent. Or both! This is Vicky McClure's spotlight, shared with Lennie James and Whatsit With The Unfortunate Hair. Rolling S1:E02 after the break!

Steve Arnott (Martin Comptson), aka Whatsit With The Unfortunate Hair, has a warrant to serve for Anthony Gates's (Lennie James) files but first he's got to run the gauntlet of Morton (Neil Morrissey) and Cottan (Craig Parkinson), loyal supporters of King Gates.

Steve's still adjusting to life on the Rat Patrol (not like in The Strain), but since he knows Gates is dirty for sure (not as dirty as WE know he is), he perseveres.

Gates briefs his team on the death of two drug dealers, most likely related to Wes Duke (Dylan Duffus), killed between shift changes in our Keystone Cops here. Gates dodges calls from his girlfriend Jackie Laverty (Gina McKeee), in his phone as "Jack Laverty" in case the missus looks, course.

Jackie "accidentally" killed her accountant while drunk driving and Gates helped her cover it up, whoops!

Wes Duke has been brought in for an interview, Kate Fleming (Vicky McClure) stays behind to check out the team caseload. She texts Steve covertly about Jackie's hit and run and sics him on Rita (Alison Lintott) from CID.

Wow. Wes Duke is super young, he can't be a drugs kingpin, can he? Gates does the interview but doesn't get very far until he shuts it down and threatens to paint Wes as a police informer. Wes's lawyer Louise Burton (Toni Midlane) sounds hilariously indignant that her client will be thought of as an informant and not murderer, but that's probably because he has a better chance of surviving as the latter.

Wes doesn't give up a whole lot anyway, something about the drugs coming in white sacks?

Jackie has given up on calling Gates and come to the police department, Rita brings her right over.

Kate is watching EVERYTHING. She and Steve aren't what you would call discreet, exactly.

Gates briefs Jackie on her case, then hands her a note. 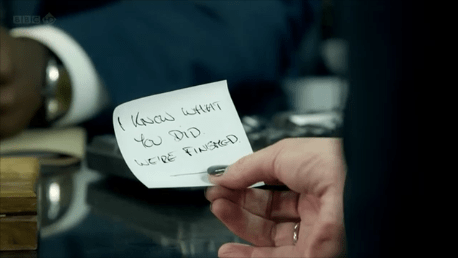 He can't possibly think she has any control over this woman? She'll just do whatever she wants regardless. She looks like a broken bird but she's got a will of steel, yo.

Over at Anti-Corruption, Steve and his boss Ted Hastings (Adrian Dunbar) disagree as to Gates' motivation for taking on the Laverty file. Steve thinks Tony (I can call him Tony, right? Gates seems so impersonal) is burying himself in a low-level case but Ted smells something off. Steve did find evidence of Tony Laddering, Ted wants to know why? What's in this for Tony? Okay, he got Cop of the Year, but you can't take that to the bank, can you?

Tony gets home in time to take his wife Jools (Kate Ashfield) to the piano recital of one of his kiddos, awww, they're so cute.

Steve is investigating around town, now he's at the cafe where we first met Tony and Jackie, playing footsie before Tony arrested a couple of muggers in a heroic display. We didn't know Tony was screwing around on his wife at that point, so we allowed ourselves to enjoy Lennie James smiling for once. WHAT?

Server Nadzia (Elisa Lasowski) remembers Tony of course, but hadn't seem "them" before. Steve's ears go up. She describes Jackie in between flirting with Steve, awww, they're so cute. Maybe she can take him for a haircut!

We watch a young criminal rob several apartments efficiently, throwing the bootle out the window into the narrow boat locker canal below. He manages to set off a silent alarm, I can't help but think a REALLY LOUD alarm would be more efficient. He's not robbing a bank or anything.

PC Karen Larkin (Fiona Boylan) is stuck where Kate was previously, taking public complaints down that nobody will do anything about. Keely's (Lauren O'Rourke) new boyfriend's old girlfriend is slagging her on Facebook and she won't have it!

DS Leah Janson (Claire Keelan) interrupts with news of the silent alarm, they'll have to send rookie Banerjee (Neet Mohan) oot with Karen. They meet the young criminal on the stairs and Banerjee gives chase. The bad guy jumps off the balcony...but misses the canal. Ouch.

Karen is not what you could call an "enthusiastic" or "good" copper.

Simon the criminal takes credit for ALL the crimes in the area, yay DS Janson! She wanted the spot Kate's in now, with Tony Gates' Big and Sexy Team, I wonder if she'll get in there as well.

Alf Butterfield (Brian Miller) is waiting for the good news from Kate, she has a little and shares it while Tony watches. He'll start helping her, which makes Kate's face go sideways. He's got more than one side.

Kate gently questions Morton about his Lexus and cane, turns out he took a bullet for one of the lads. Tony looked out for him too.

They arrive at the scene of the murders, where Tony is already on site. Kate questions Tony as to why she's on the team.

Interesting move. Are they bonding? Don't bond with the debbil!

Steve's shown up at the station to investigate the Laverty mess, first he has to run the gauntlet of bros in the anteroom, honestly. How are these grown men being paid for a job? Steve and Tony have yet another tense standoff.

Steve and Kate meet up in the parking garage to compare notes, she's undercover for Anti-Corruption!

"Nothing's off limits for you and me, Tony... I wish you were here."

She explains about her accountant, he got angry when she told him she wasn't going to include him in her expansion, she thought he was going to kill her! Nobody else would believe her but Tony...

"The last thing I would want is to hurt you or your family." She turns and quietly goes upstairs by herself.

Tony can choose between leaving or following her upstairs. He agonizes, then climbs the steps, self-loathing in every move.

Karen and Banerjee are wandering around Mr. Butterfield, who is being harassed by several kids. He makes a stand against the wrong kid, taking down the wee lad who just shook down Wes Duke, meaning he has his pockets full of drugs and money. The kid drops the drugs (in a white sack) over a nearby fence and I'm worried Wes will be paying for that twice now.

Hey! Steve continues to look into random crimes in Tony's area; one of the robberies that kid admitted to was of a hairdressing salon owned by Jackie! What's going on??

Steve goes to check it out, ohhhhh

IS JACKIE THE DRUG KINGPIN????

Because the thug at the salon surely isn't doing anyone's hair and he sounds maybe like the guy who just called and put the screws to Wes. Possibly Russian Thug has never met Jackie either, hmm.

Deepak (Faraz Ayub) from Team Big Sexy has been following Steve for Tony, he seems pouty about it. Maybe he wants to do actual police work, like everyone else on the team.

Steve's next move is to talk with Jackie herself, oooh he does think she's a kingpin!! A money launderer! He's bringing her in for questioning the following morning, and springs Tony on her at the same time.

Steve comes back to the office riding high to find that nobody will meet his eyes. The coroner is re-opening the investigation into the fatal shooting Steve's team was involved in.

Back before Steve was an Anti-Corruption caped crusader, he commanded a disastrous and tragic raid on a suspected terrorist. Instead of capturing a terrorist, the S.W.A.T team murdered an innocent man with a baby on his chest, for the want of a nail on his door number.

Steve was the only one to insist on telling the truth about what happened, the rest of the team is now rethinking their statements and this could be not awesome for Steve.

Tony ducks Jackie's calls and tries to find out what's up Steve's bum, he about swallows his tongue when he sees the name of the salon owner. Off he runs to see Jackie, but this time to arrest her, which seems...unwise.

She taunts him from the backseat, he cries and chokes out "don't talk about my kids!"

Kate calls Steve to give him a heads up, but he can't talk since he's out snogging with Nadzia.

Wes gets fingered by that wee lad who threw away the drugs Wes gave him, after a chase he's found dead and hanging from a pole with his fingers cut off. That is a solid lead now.

Kate breaks away to call Steve, nobody can find Tony, so he dumps Nadzia (I'm sorry, I can't don't this. You're a witness) and they're away.

Tony and Jackie are drinking and about to hump when the police knock on the door oh but it's not the police, it's three thugs and they knock Tony out, kill Jackie and put the knife in his hand!!

That was brutal!! And so fast, so unexpected! We're done!

I guess Jackie became expendable, and wasn't a kingpin after all! So who's the big Kahuna? Who is calling these shots? The affable Derek Hilton (Paul Higgins)? I can't think of anyone important enough that we've met! Jaysus. Until next time.