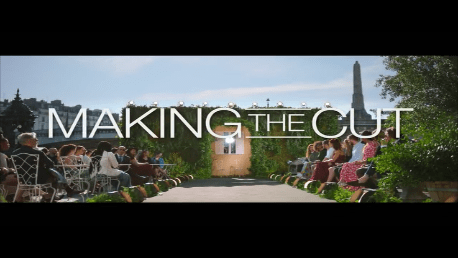 Hey y'all! You're just in time for some more Making the Cut with Heidi Klum and Tim Gunn! We're in the middle of a cliffhanger; last time we were about to lose a whole design team when one member walked out with the other left pleading their case on the carpet. Will they stay or will they go now? Let's find out after the break, rolling Making The Cut S1:E04  Fight For Your Life Recap!

We open with designer Troy Arnold trying to stay in the competition for Amazon's sweet, sweet million dollars but host and judge Heidi Klum is not convinced he'll be able to impress them. The judges have a chance to change their vote based on talking to the designers, every other judge from Naomi Cambell, Nicole Richie, Joseph Altuzarra and Corine Roitfeld have decided to let him stay and that's enough for a majority vote.

I dislike that Heidi took another opportunity to take a shot at Troy's work before telling him he made the cut, but then that's kind of what I dislike about Heidi in general: she's rude. I know I'm supposed to be edgy and shite, disdaining common courtesy that Keeps The Women Down but I hate people being rude to other people's faces. And not just women, I kind of hate rudeness in general, which is why I've got myself into some pretty pickles.

The judges remind the designers that they want to see this fire in everyone; when you're talking a million dollars, they want to see exactly that much interest reflected in the level of work they're putting out.

Mentor Tim Gunn looks thoughtful after. We were all shocked when Joshua Hupper left last week.

He chats with Heidi after, he has an idea of how to shake the designers out of their complexity and he'd like her sign-off.

Tim calls the designers down to the studio, here's the deal: tomorrow, they have seven hours to design and execute an accessible look using their leftover fabric from the last few challenges and the sewing machines in the room. No seamstress support. No fabric shopping. The runway is at the end of seven hours, someone's winning and someone else is going home.

Esther Perbandt of Germany has won twice already, but cannot sew. Similarly, Sabato Rossi won with young Sander Bos last week, but Sabato cannot sew. They're going to be in trouble and they're not the only ones.

Will Riddle heads straight to his hotel room to start sketching his design but it looks like most everyone else goes for drinkies and supper. Not Troy, he's sketching too, no messing around.

Megan Smith is drawing in her room as well, she tells us about her difficult childhood. Her mom was only 16 when Megan was born, and later was diagnosed with schizophrenia. Megan developed a resilience that she's relying on now. Her brand is Megan/Renee, which she calls a lovechild of Beyoncé and Bianca Jagger.

Heidi and Tim go fencing in Paris! Tim has been fencing for the past four years, after dozens and dozens of fights he's won exactly one. Against a nine year old girl named Arya, to whom he apologizes.

Everyone comes into the studio a-running, trying to get as much as fabric as possible. Jonny Cota got great feedback on his collaboration with Megan last week, he's decided to show the judges his feminine side.

Will got awful feedback, he almost sunk Esther, who'd won the only other two challenges, so he and Troy are the Redemption Kids. Will is using the fabric that almost sent Troy home, that's a whole 'nother level of crazy.

Israeli Rinat Broadach has been solidly middle of the pack this entire time, she wants to stand out and get a critique today. It took us forever to get to know some of the designers, but now I feel like the dam is opening! Tell us about you, Rinat! She has a self-named brand, Rinat *picture funky graphic* Brodach, carrying both womenswear and gender neutral clothing. Interesting that Ji Won Choi said she was the "sexy" designer. She thinks god made her eat shit to prepare for this; her god sounds nasty.

I do love that she's dressed Billy Porter who can outwear most of us in a dress.

Jonny borrows some fabric from Esther, he'll share the million dollars with her! Esther is working with a big-breasted model, which she seems to think expands her range. That's not actually a sizing range, Esther, except maybe for swimsuits.

Sander is going full experimental. I think I would be okay if he won, you know? He's arrogant, but able to back that up with talent and he's quite helpful and respectful in the room. I like his work. I also like Ji Won's work, she's going to make it regardless, as will Sander.

Tim teaches Heidi how to move while fencing, she's not impressed with the costume.

Back to the room where everyone is working like crazy, Tim pops in to give quick feedback, no full TimTiques today. It's very fast, he's positive with most people but is worried about Sander's deconstructed whatsits and Rinat's basic croptop.

Sabato has never sewed before, ever, so he's feeling quite accomplished with his red dress that isn't even black, especially since he even figured out how to put red thread in one of the sewing machines.

Troy changed the thread in that machine.

(If Troy says he's "fighting for his life" or similar again, I shall scream)

Sabato bitches and bitches about that stupid red thread, honestly, save your breath for the running, Gramps.

We're back fencing with Tim and Heidi, she beats him in about three seconds flat. She's never fenced before, he's been at it for four years, what does he like about it? He barely moved and seemed only defensive.

Sander paints his fabric with paint while everyone tries not to mention how much Jonny's fabric is totally all Megan. He's messed up the chest area too, there are no darts and the material is gathering oddly, this is going to be a challenging runway for our Jonny.

Model fittings! Until now, everyone has had the time to be nice to one another, but this accelerated timeline is bringing out some ugly colours in people, and not just on Will's clothing. Ji Won loves Megan as a person but thinks everything she designs already exists.

The judges minus Corine Roitfeld assemble in the workroom to watch the show, c'mon Ji Won! Here are the lewks: 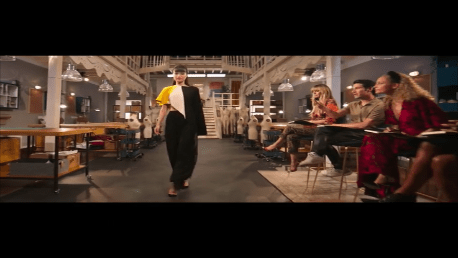 Megan does great with her look, elastic waistband and all. I kind of love the way the pants end, very elegant with a ribbon. 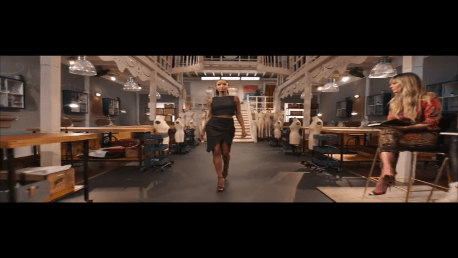 The designers all think Rinat's look is sexy, but the judges think it's boring and bland. Only the twist on the skirt makes it salvageable. 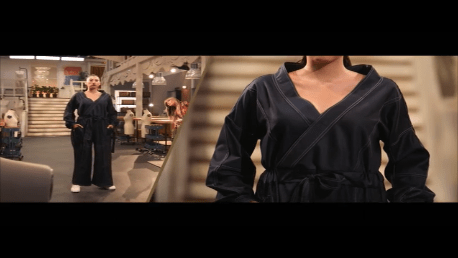 Loatheeeeee this look. Hate it so much. Joseph Altuzarro aka Darren Criss calls it middle of the road, I think that's being very kind. Hate.

Looooook how gorgeous this is??! It moves beautifully, the judges love the feminine rock and roll look, this would totally go with a leather jacket. 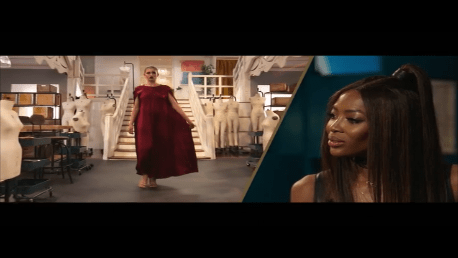 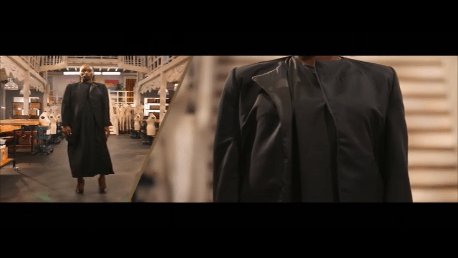 Oh Troy. Well. I'm glad I got to know you before you went home, because there is no way in hell you are not catching a flight home in the next 24 hours. 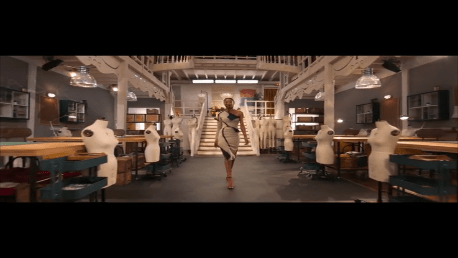 I love Sander's look here, the painting gives it a one-of-a-kind feel that makes it maybe not as accessible as they asked for, but it's awesome. 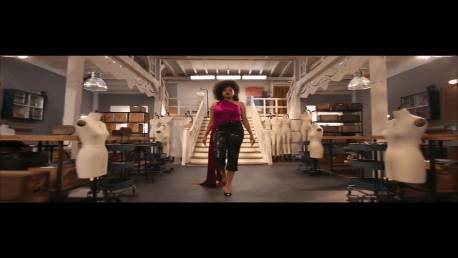 Will is going home too, they don't think he has the taste level required. The good news? They know his work now! The bad news: they hate it so much they want to kill it with fire. 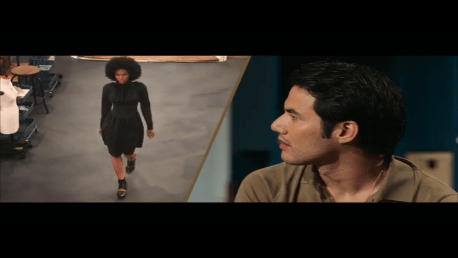 Wow is all the judges say at first, Esther's work is unreal. I know, it's another black dress, but the design details are insane. I would not be surprised if Naomi snatched it off the model backstage, her comments: "waist is heaven" "the silhouette is divine."

The judges explain the show premise again and then we're to the judging! Rinat finally gets her critique! Wooooo Rinat! I mean, I don't think it's going to be a good critique, but any feedback is better than working in a void. It's not bad, really, they liked the skirt so they just warn her to amp it up a little before Heidi polls the judges and they decide she's making the cut.

Megan is called up next, she gets great feedback on her "sophisticated fly-girl" outfit, but didn't win. Booo

Jonny's up now, they LOVE his Beetlejuice daughter's dress. Heidi calls it one of her favourites and Jonny wins today! Yay!

Now for the non-winners: hai Troy. Bai Troy. Naomi rakes him over the coals with Heidi but it's Joseph Altuzarro who drives in the knife. This is painful and I maybe watched between my fingers as he's sent home. Hugs all around.

Hai Will, on the carpet please. Heidi thinks he is designing for women going to the disco, many many years ago and she's not wrong. However! Will said he's specifically designing for the model who is inspiring him, I love that he's making things more flattering for her. It's just not looking great overall. Joseph carefully brings up the taste level and then Heidi asks Will to make them change their minds.

It's so cringeworthy, good lord, then Heidi polls everyone and nobody's changed their minds but at least Will got to say something nice about himself I guess? Goodbye Will, enjoy your luxe.

Heidi and Tim survey the designers, how is everyone enjoying Paris? Is everyone feeling settled in and ready? Good, now go pack your bags, everyone is off to Tokyo!

See what I mean? Heidi can kind of be a dick. Everyone's excited about Tokyo, though, until then!

Cheers! Until next time, y'all.