What a bloody show last week, yeah? And that wasn't even the end of the season! Rolling part one of the Mr. Robot two part finale after the break

We open at Elliot musing about Angela's assertions that they should give up and for the first time: I would like to find out how everyone else is, please. I think Darlene and Cisco just got shot, I can't BELIEVE Dom walked away from another bloody shootout, but here we have it:

Elliot's thinking about Mr. Robot now, who is ever present but somehow now gone and sometimes, this show is just so fecking mastubatory. He had a friend in middle school, Sam (of course Sam), who taught himself to be a silent observer like Mr. Robot by repeating the mantra "Mind awake, body asleep" to himself. Elliot would like us to do this with him, please. I'm going to hashtag it, that will have to do.

Ooooh, bebeh time! Tyrell and Joanna's wee darling is so adorable! Mr. Sutherland hands her the phone, what does Joanna want to do with this information? She thinks this is Tyrell's greatest gift EVER

Angela's in the back of a van, being taken..? Dom's sitting shell shocked on a hospital bed, this isn't her blood, in case we were wondering. But WHOSE blood is it?? Don't make me get all CSI-y up in here! Agent Santiago kicks everyone out. She's blaming him for publishing Cisco's picture, which triggered the Dark Army, but he lays it out for her carefully. The USA is back in bed with China again, now that the Chinese bailed out ECorp to the tune of a 2 trillion dollar no-interest loan. The FBI won't be investigating the Chinese any longer, even with the whole "murdering a bunch of FBI agents a month ago" business. She rails, they can't get away with it! His calm assurance that "they're going to get away with it" deflates her more than anything else he's said and really: two trillion dollars is a lot to argue against.

I'm interested in what Whiterose's play is; there's no way he doesn't have a bigger and better plan than Phillip Price.

Angela's reached her destination; it's a suburban home with far too much white cabinetry to belong to a parent. She's locked into a dark room with only two chairs, an old computer and a fish tank. The drip drop of the fish tank sounds like a clock ticking and that makes me think of Whiterose. Everything on the desk is outdated, a rotary dial phone, a typewriter, the book Lolita (back when people thought it was daring and sexy to talk about sex with minors) and a floppy disk. She's staring at a Hang In There poster when a young girl enters, they don't have much time. "Have you ever cried during sex?" is the first question and there are more, if Angela doesn't answer, she'll be beaten The phone rings and they continue

Is this a trippy drug state?

Phillip (Michael Cristofer) is meeting with Jack (name not given) to push ECoin loans; Jack doesn't think the President is going to allow ECorp to create it's own currency. He's furious, this was Phillip's end game all along and now he's in an untenable position due to the roaming energy failures. Phillip ends with the wisdom that "defeat can still be profitable" and that's not what he said to Whiterose, izzit?

Trippy questions are continuing: how does Are You Red or Purple? make sense? 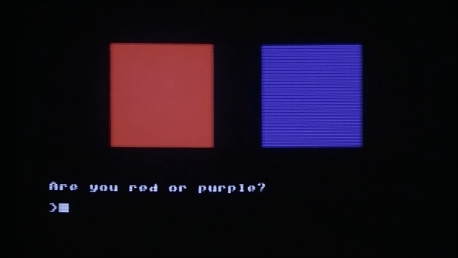 Is The Key In The Room? And then there's a call and I don't know, man, this is all too weird and for Mr. Robot... that's saying a LOT. The water is slowly draining out of the fish tank, that's all I know for certain.

Dom still can't sleep, so she hits up her Siri Alexa to ask a bunch of personal questions. Honestly. For five whole minutes.

The fish has died 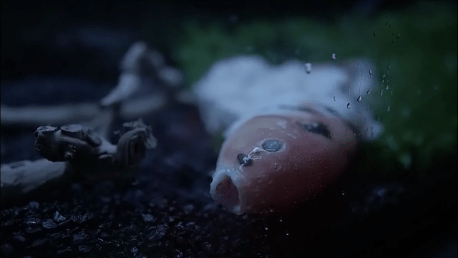 And finally Whiterose (B.D. Wong) appears. The dead fish is exactly what would show the importance of time, wouldn't it? Angela doesn't recognise Whiterose, which is sooo unfortunate. I would not like Angela to die and Whiterose does not suffer fools gladly.

Whiterose calls Angela lazy for not trying harder to open up the infinite possibility that is a door; Angela calls her a terrible person in return. She thinks Whiterose hurt that little girl, but that was just a test: of gullibility or empathy, depending on whether you like little girls or not. In a totally non-Lolita way.

I am very nervous for Angela right now, but Whiterose is intrigued. By her calculations, Angela should have died 90 days ago and yet: here she is. Whiterose doesn't understand why Phillip Price has jeopardized their mutually profitable friendship over her?

Angela doesn't follow, she'll hand over the jump drive if she can just go. Whiterose doesn't want her proof, she wants her belief. Has Angela ever imagined that believing something could make something happen? That depends on what she thinks is real?

When Mr. Robot really dives deep into the cryptic well: everything gets a little sideways shaped.

Elliot awakens to see Mr. Robot rooting through paper, he's fixated on a cypher message written on a BBQ menu, and he can't see Elliot anymore, since he's Mind Awake and Body Asleep. Mr. Robot works on the code while Elliot watches and it distills to a phone number; there's a cab waiting at 25th and Main and Mr. Robot is off!

There are a LOT of other people in the way heading towards 25th and Main, I had to gif Elliot's face looking for Mr. Robot since this is pretty much what he looks like all the time

Heeeey, is that Terry Colby wandering around? No matter, we're on to Angela at Nayar's house (Sakina Jaffrey); Angela needs Nayar to forget her voicemail and to not call her any more. Angela's odd Moonie-like grin is twigging Nayar's antennae, her ears are all the way up.

Even Elliot's getting confused; technically he's following himself: where is he going? He gets into the cab to be asked for address? Er. In gets Tyrell Wellick (Martin Wahlstrom), who sends them to Chambers and Church. They have to be careful now, them meeting is an issue but their partners have been very influential. Elliot just wants to know if the cabbie sees Tyrell too? Hears him?

I understand the skepticism

They get kicked out of the cab; Tyrell's tightly furious. He's been under a lot of stress too! Get it together, they're close! Stage 2 is written and on the verge of being implemented, they walk away as Tyrell quotes Casablanca: this is the beginning of a beautiful friendship.

I don't think I can add much to this recap, except to say that the completely useless-seeming minutes-long vignettes of randomness were probably very important. Meaningful, even. However, I learned long ago that applying logic and rational thought to Mr. Robot is a mistake, so I will just wait until the season finale next week like everyone else. Cheers