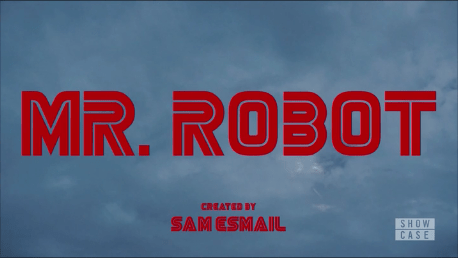 It's the season finale of Mr. Robot and if you aren't afraid: you haven't been watching. This has been a roller coaster of a season and this finale episode has been written and directed by Sam Esmail, so we all need to brace ourselves. Besides that, last week was mostly calm and trippy, so there is no way SOMETHING big isn't happening. Not like other shows that use season finales to be giant manipulative lazy writing arseholes (you know who you are), but Mr. Robot has clearly been building to something and it's time to find out what exactly that is. Rolling S2:E12 eps2.9_pyth0n-pt2.p7z after the break.

We're in the SUV with Elliot (Rami Malek - congrats on the Emmy, big guy!) and Tyrell Wellick (Martin Wahllstrom) discussing their mutual interests. Elliot doesn't think they have any. Tyrell knows Elliot's dirty little secret (WHAT DIRTY LITTLE SECRET??), but they're "both too smart to allow pettiness to dictate our actions." The only thing Tyrell will be doing with regards to Elliot is nothing.

For context: Tyrell was in the middle of a sharp downward spiral when Five / Nine happened, he didn't get the CTO job, Joanna was kicking him out and he'd just murdered Sharon Knowles.

Elliot advises Tyrell that he needs to stop looking down, he needs to be looking above himself. Tyrell and I: whut?

Tyrell recites the line from a poem "so much depends upon the red wheelbarrow glazed with rainwater beside the white chicks" which was the only English his father knew. He uses it at a talisman and a reminder that he never wants to be like him.

This show is ALL about paternal relationships.

A disinterested lab worker (Stephen Lin) whose Asian face makes me think this is Dark Army-related (racial profiling?) allows Elliot and Tyrell access to the an abandoned warehouse that is the joint operational base between fsociety and the Dark Army (is it still racial profiling if I was right?). Elliot seems confused about all these details, worrying Tyrell. Can he handle this jelly?

Elliot asks about Joanna, what's going on there? She's almost divorced so she can be with her wee Dom-In-Training but Tyrell's doing what he has to. Ready to see what they've done?

Oh yay, Darlene (Carly Chaikin) is alive!! I don't know if I ever expected to say that before... Agent Dom DiPerro (Grace Gummer) is playing Good Cop, but Darlene isn't having it. I'm guessing it's Cisco's blood all over everything. Darlene invokes the Fifth Amendment over and over while Dom tries to give her condolences. Agent Santiago (Omar Metwally) counters with the Patriot Act ("you are not on some TV show" - NICE!), she is considered an enemy combatant and she has no rights.

Dom asks for a little time alone with her Jersey Girl compatriot, by the end of the day, she bets they're gonna be BFF. I'll take that bet.

Joanna (Stephanie Corneliussen) has gone to the address Elliot found for the number that has been calling her; what.the.everloving.f*ck?

It was Scott Knowles (Brian Stokes Mitchell), who got the job Tyrell wanted and who's wife Tyrell killed. How does he have a picture of a sonogram of her and Tyrell's bebeh? Make us understand, Scott.

Why has this powerful man risked everything to make one housewife crazy?

Oh. Oh Sharon was pregnant when she died, she'd just told him right before the party announcing his new position and that's where the sonogram came from. He thought that was going to be the best day of his life.

I feel I would be remiss if I didn't mention that Sharon thought she was going to be having a much sexier time on the roof with Tyrell when she died, so I don't know if things would have gone exactly as Scott thought anyway.

He gained and lost everything in the space of 24 hours and he wanted to do that same thing to her. He wanted to give her hope so he could crush it.

She touches his face and he stares at her, seeking redemption, forgiveness, what?

He gets fury, bile and invective hurled at him as she spits her disgust at him for mourning a dead woman who was planning to f*ck her husband (okay wasn't just me that thought it needed mentioning) the night she died. He can't take it and he jumps her, I looked around for her henchman earlier, where is he??

He's on top of her and her feet are kicking in her shoes just as Sharon Knowles's were when Tyrell was killing her and eeeehhh. She goads him further and of course, she loves to be hurt and he comes to his senses and calls 911 and eeehhh.

I need a Xanax and a tall glass of chill the eff oot, one sec.

Dom gives Darlene a status update on Vincent, he's in big trouble for the TeaBagging / Domestic Terrorism incident. She's just trying to work the knife under the flap, but Darlene isn't budging. She suggests Dom go back her to manual, find the chapter on "conniving c*nts that don't give a f*ck" and get back to her with some better tactics. The only other information?

Dom laughs, which knocks Darlene's bravado down a notch. "Wait here." She has the fsociety mask (with probably Darlene's DNA), the camera, buncha other stuff. Darlene shrugs it off, but Dom also has the casing from the bullet found in the arcade fired from Darlene's ex Xander's gun and

FOR THE LOVE OF GOD, I FORGOT ELLIOT ALREADY (maybe) SHOT TYRELL IN THE ARCADE. Is NewTyrell another of Elliot's manifests?

Elliot's looking at blueprints? Oh of Evil Corp's ground floor and he can't understand why everyone thinks he's the leader! And he has no clue, not one. He COULD ask Tyrell, but he's worried he's not who he thinks he is.

Evil Corp is moving all their paper records to one location: here. They're rebuilding their database and fsociety will be burning it all up. Tyrell calls it a nice distraction, but this part is for everyone. Look, the gang's all here!

Derek (Chris Conroy) is so angry about Joanna's beating that he even wrecks his Cocktail poster. Awww, it's not Tom Cruise's fault! She knows how he can make this up to her, though, instead of going after Scott Knowles, he can finger Scott for Sharon's murder. He was bartending at that party and she wants him to punish Scott by lying about the murder. Eeeh, fairly amateurish, he's not convincing enough and he's kind of a moron.

Dom is pushing Agent Santiago to flip Darlene: they've had a plan in place for three months? Is this the plan that had Romero killed and Mobley and Trenton disappearing? Oh great, more Dom monologuing, she just needs a lollipop. She'd like to show Darlene something, Ms. Alderson is a lot more special than she thinks.

Darlene can't resist and with that she's drawn into a room across the compound where Dom explains their python project. They're been lying in wait and lots more blah blah-ing, but the main parts Darlene and I are fixated on: 1) the Fibbies have EVERYBODY listed. 2) they don't know Susan Jacobs is dead - Mobley isn't crossed out either 3) Romero was killed by a stray bullet, not Dark Army and 3) Tyrell is listed on TOP of Elliot? Whatever, dude

Elliot and Mr. Robot (Christian Slater) are fighting again. Elliot wants to know what's going on?? It boils down to the usual; Elliot shouldn't worry his pretty head about it and really, Mr. Robot is just distracting Elliot so Tyrell can get the malware rolling. Elliot has always been about a bloodless revolution, he's shutting this shite down.

Tyrell can't believe his eyes; he's not taking it lying down either. He's got Xander's gun from the arcade.

Manifest or real? Manifest of real?? We're about to find out, Elliot thinks he's the only one who exists and it's time to take back control.

Then Tyrell shoots Elliot and the police sirens start while blood pours out. He collapses to the floor while Tyrell explains that Elliot did this to himself, just not... literally. Elliot gave Tyrell the gun with instructions to kill anyone who tried to stop them, and now Tyrell gets it. Mr. Robot is flickering in and out, showing the difference between the very solid Tyrell Wellick crouching with a gun in his hand.

We're out to Let's Be Frank and Angela calling Tyrell. WHAT? "Don't let anyone near him, I should be the first person he sees when he wakes up?" ANGELA is a mastermind? WHAT?? And Tyrell LOVES Elliot?? WHAT THE FARK? This is so bizarre, up is down and we're oot to brownouts becoming blackouts to the tune of Bob Seger's "We Got Tonight."

We're not quite out, though, we've got this classic rock tune of the vintage variety blaring in a car circling the parking lot of a Frye's where Mobley (Azhar Khan) is!! Mobley is alive, yay!!! He's with Tonya, holy shite, that's Trenton (Sunita Mani)!!!! I don't recognise her without her head-covering, but those eyes are unmistakable! They've moved far away and she knows a way to undo all of this, I'm listening! Mobley doesn't want to know from it and just then Leon (Joey Bada$$) interrupts: do they have the time? Oh shiiiiiiiiiiiiiiiiiittttttttt, Mobley and Trenton's time is up.

NOW we're oot. What a show! Until next season, Script Kiddies, thanks for reading along on this magic carpet ride of a journey through Elliot Alderson's consciousness. I am incredibly curious as to Angela's real role in Five / Nine and what's going to happen to Darlene.