Last week I dipped into the second series of Ordinary Lies starring Con O'Neil from Happy Valley, it was heavy, brah. Sah heavy. The work was just so above par that I couldn't stay away long, Con (like we're pals! First name basis and everything!) in particular was excellent, so let's find out what else is shaking at this sports store.

We're going to learn about Holly (Kimberley Nixon), big boss Jenna's (Angela Griffin) lovely young and efficient assistant. She arrives at work tired but selfie-ready, to be handled a bunch of usual tasks by Jenna. She's the oil that runs the machine!

Jenna asks for a little extra today, can Holly feed her cat this weekend while she's away? There's a spa day innit for her!

Holly scrolls through Facebook, where people like the yawning selfie she took and everyone is having a much better life than ANYONE EVER. Since I decided to post very few pictures of my kiddos (their selves, their choice!) I so rarely post on Facebook that I will probably deactivate after I sell my house. I hear it's good for selling houses, plus then your friends can snoop around without actually having to visit.

It's Toke's (Joel Fry) birthday, he doesn't want any of the usual, Holly, absolutely never a pissup especially, got that?

Plus has has lunch plans with the forklift driver Neil (Noel Sullivan) and by that I mean I think they're snacking on each other. It's very...rushed and then no proposed contact until maybe after footy?

Neil forgets his coat so she washes it for him,  a good Booty Call to the end. Of course she finds some mysterious torn up bits of paper in his pocket because this is Ordinary Lies and that means everyone is cheating. Or thinks about cheating, or thinks someone else is cheating and I should calm down. That was last series, maybe this one is different, the first episode certainly was.

Ohhh, she puts the pieces back together and it's a Dear Holly Letter, he's bored and feels stuck in a rut with emotionally needy and unsuccessful Holly. She goes back to work to see him chatting and laughing with a co-worker, Holly confronts her right away. Even though Wendy (Rebekah Staton from Black Mirror S1:E3 The Entire History of You!) is totally a lesbian, Holly warns her away from Neil.

Holly goes to see her mum (Ri Rihchards) who has a thing for fast cars and doesn't want any judgement from her daughter. After all she put up with from Holly's dad! Holly explains about Neil, but he's not the first to take a runner. This is a pattern with Holly, ever since Arden (? Ardun?) when she was happy and then lost her confidence.

Holly goes home  and stares at pictures of Adam Carver (Adam!! John MacMillan), he's still single according to Facebook! She looks up his work address and heads off to stalk him Old Skool.

She stalks him to a supermarket where they share an awkward hug, I waited 5 minutes for a "hey, you wanna get a drink?" but we have to listen to her lie about being the manager and him talk about being separated from his wife first. Apparently.

They exchange numbers and Holly heads home to steal a bunch of pictures off Facebook for her new exciting life.

It's next day and time for Toke's birthday party, yay! Hey Joe (Con O'Neill), how are you and Belinda doing?? Pissup at the pub later, just as Toke totally didn't want, Neil's going but Holly has a date with Adam.

They chat about his marriage (his wife cheated, guessing with someone named Zane, who was their marriage counselor) and his past behaviour (he was a prick), he thinks he made a mistake back then. They had some good times, didn't they?

She cries silently in the bathroom, makeup askew, then heads out to Adam wanting to see her again! Yay!

She heads to the pub, where Neil is happy she came after all. He quite likes her, even if he worries that they're not spontaneous enough. At least he actually knows her, which is more than we can say about Adam.

Across the pub, creepy Karl (Gareth Pierce) has Ash (Luke Bailey) cornered again. I've got my eyes out for Ally (Jennifer Nicholas) to pop 'round and ah, there she is. She's slightly irritated that he won't date her after they shagged in the alley after last company pissup, so makes a comment to Karl about Ash's former career as a footballer. Karl remarks that he must have been shite, then Ash is gone.

Ally follows Ash outside to apologize, which he accepts by asking her out on a date. He doesn't want a girlfriend but he wants to see what happens.

This, ladies and gentlemen, is the definition of mixed messages.

Um. Neil and Holly live together? So she has to turn to the side to see her new Facebook feed? Oh girl. Just talk to Neil about the letter before you do any more messing about with Adam. Save yourself so much trouble.

At work Jenna asks Holly to cancel a fancy work dinner, orrr maybe ask Jag (Simon Tinder) to represent the company? Holly heads out back to find Jag, who's...annoying? I don't know, we just met, but this sums him up nicely.

Holly keeps the swank invite for herself, but Neil doesn't want to risk it. That's not very spontaneous, Neil!

She checks out Jenna's house (I fink feeding cat) then heads to the hotel to check in as Jenna at the conference where Adam is waiting.

Ohhhh shite, Jag is at the conference after all, and he definitely knows she shouldn't be there and heading to the elevator with Adam, not Neil.

She has to get mean about it, she knows all his peccadilloes as a married man traveling not always solo, so he'll probably keep a lid on it.

More tricky is when Neil calls and asks if she's coming round? Nope, spending the night away and awww, the lies are just multiplying now. Holly does send Adam packing when she gets to her room, though, she doesn't want it to be like this the next time they reconnect.

Ash didn't show up for the dinner date, but he did stalk Ally to her house and wants to shag, so...?

Holly digs in deeper and invites Adam round to Jenna's house so she can make him dinner to make up for the weekend. This is almost painful to watch.

Adam starts poking around the apartment, surprised Holly isn't answering the phone and wondering who Jenna is that Neil Gaiman signed a book to?

Side note: my very favourite book ever is being made into a TV mini-series, it's Good Omens by Terry Pratchett and Neil Gaiman, yaaayyyyy!!

This is totally painful to watch.

And now the no more lying, straight to shagging in Jenna's bed.

Also: you remember Adam did something horrible to you and you broke up, yes?

Directly post-coital, Adam's phone rings and he gets up to answer which puts ALL our ears up.

He has a tense conversation that we can't make out, but he definitely lies about why he's leaving right away and not coming back.

She follows him in Jenna's very expensive car that she has no idea how to drive, yikes. He goes right to a woman, which makes Holly drive Jenna's car even more badly, she'll be lucky if she keeps her job.

Ash is too hungover in the morning to go to work, so Ally leaves him with her keys and heads to work where Holly is begging the police to let her pay the speeding fine without sending a letter.

Holly leaves work and heads back to where she saw Adam drive to, following her to school where she picks up her kiddo, Adam's son. She deep dives his wife's Facebook to find a picture of the happy couple with their son at a birthday party.

Is Adam not separated after all? Did he pre-emptively do to Holly what she was doing to him?

A drunk Holly calls Adam over for a chat at Jenna's, she's printed off that picture. Oh but it's so much worse than we thought, Adam's son is 7, which means he was conceived when Adam and Holly were still together. He and the mother aren't together, but...a child he hasn't mentioned.

Sirens play in the background as Adam begs her to remember the good times, think of how far she's come! Maybe he was holding her back!

She has another picture for him.

It's an ultrasound of their baby from 7 years ago, the one she got rid of. He didn't want her and she didn't know what to do.

She throws Adam out in high anger, in the process seriously wounding Jenna's cat that she's there to take care of.

Adam finds out pretty quickly from the neighbour that this isn't Holly's place OR kitty that they just murdered, be well kitty!

It's Monday and a morose Holly is back at work, looking for Neil. She thinks it's time they call it a day, yeah? He's very confused, what's she on about then? She pulls out the note, she knows what he thinks of her.

But they aren't. He wrote all those words about himself: emotionally needy, plays safe, not successful, it's all about him and why he isn't good enough for her. And why she will leave him one day.

He thinks she acts like he isn't good enough for her, as though he's second best. She has to agree, he deserves someone much better than her who will love him for who he is.

Let's just say...Holly is dealing with some stuff and I'm glad she pulled the plug with Neil before it was too late.

Now we know what Ash's real problem is. 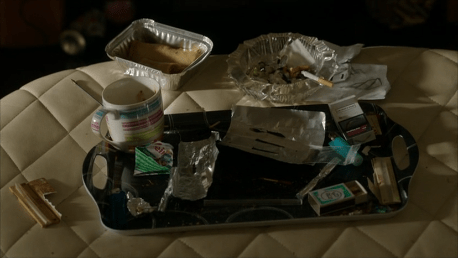 Ally finds him about passed out in the kitchen, he loves her hair!

Holly shouts after Jenna, it's all right for her with her perfect life and perfect boyfriend and perfect everything. All she sees online is how amazing everything is but she should know: that's not real. It's ALL an illusion.

Jenna leaves and gets a call in her posh car, someone from the prison has left a message and needs to talk to her.

Holly is about to delete her Facebook profile when she gets a direct message from Adam with their song "Fade Into You" by Mazzy Star.

Side note: that song will always remind me of an internet friend from Washington State: shoutout to JM!

How about they try again, but with telling the truth and being themselves? Why not indeed? And that's how we go out, them chatting and calm.

Well. There's a lot to be said for honestly, but I'm happy to see that Holly and Adam were able to at least talk about what was really wrong. There were clearly so many issues between them that had to be fixed and were waiting to be dealt with.

Once again I'm surprised at the authenticity of this series of Ordinary Lies. I feel as though last season was cotton candy compared to this rich stew of human emotions.

Wait: does that sound gross?

If it doesn't, stay with me, hear me out! This season they're really getting inside people's melons and working out their motivations with actual consequences like Holly being fired. Ash is possibly a drug addict, that's not going to be solved in a gif as some of our problems were previously. I'm carefully looking forward to seeing what they come up with next. Until then! Cheers