Hi everyone and welcome back to Black Mirror Season 4. I occasionally need a break from this show when it goes south as in S4:E03 Crocodile (YOU KNOW WHAT YOU DID, NETFLIX) but since then I've had a bit of a health scare, no better place to put my energy into something that makes me shouty. Rolling S4:E04 Hang the DJ after the break.

We open with Frank (Joe Cole) and Amy (Georgina Campbell was I've seen EVERYWHERE lately, was she hiding? This week alone I've seen her in Retribution and previously in Broadchurch) about to have their first date.

He's super nervous, almost slapstick levels but she's cooler, watching. Watching him point out that she chose HIS side of the booth to sit on, what? They get on allright, both of them are on The System for the first time.

The System seems to be a small circular object that has set them up AND ordered food for them both. Can he try her pasta?

There's a burly gentleman at the back of the restaurant, does he enforce food separation? Or what?

Time to find out their expiration (??), they have to tap their Systems at the same time and...12 hours. How long they live? Or is it like San Junipero? Either way, that's less than they expected, but the tapping also started the timer so now they're on a countdown.

They eat quickly then head off in a tiny truck to a little cabin out in the woods. This little cabin has a LOT of yellow, including the bed that they both head towards.

Are they...going to shag? They don't know either!

The answer is: only if they want to.

They lay awake in bed, fully clothed, talking about how much simpler the system is, nobody has to find anyone or break up with anyone, just ask a Coaster all important life lessons. Before everyone had "option paralysis", too much to choose from and nobody knew who they really liked.

Time's up! Next time he would totally get it, though, and so would she. Ah well. Onto the next?

That really is a perfect little cabin. 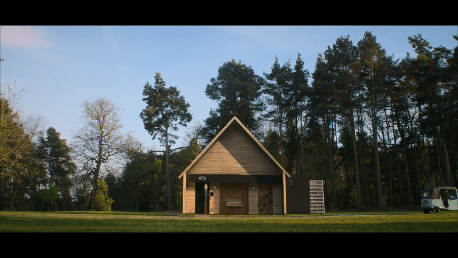 Both Frank and Amy ask their Coaster what the point of that was? The System is learning about them, that's what helps The System find someone for them, one 12 hour relationship at a time.

Amy quite likes her next relationship partner, Lenny (George Blagden - I feel there aren't enough Georges in the world) but he looks like straight up LondonDoucheBro to me. Smirky, smug and with pointy hair. I hope it's only 4 hours.

Frank's date with Nicola (Gwyneth Keyworth) has gone south already, he's late (had to change) and she's already eating and angry. I give them 90 minutes. She also wants to check the expiry right away!

Nicola and I: JFC is this a mistake? Nope. One year's sentence.

Amy and the dishy Lenny get 9 months together, she's almost drooling she's so excited. I'm telling you, Amy, you don't want anyone who spends that much time on his hair.

Does that mean they have to live at that little cabin for 9 months together or a year?

This is Lenny's fifth relationship, he'd like to get straight to the sex, figure out the compatibility. Years ago, when I was online dating, I found that TALKING in person was actually much more useful, but I didn't do five relationships back to back either, so carry on, Lenny.

Frank and Nicola are also boning, but it's not going as well. Lots of topping from the bottom from Nicola, then glum sleeping after. He checks his Coaster after: still 365 days left.

Frank asks his Coaster the next day, why can't he just walk away? The System promises his ultimate match at the end, but he has to follow the process.

Frank sees Amy at a System function, but he also sees dishy Lenny and doesn't approach. A couple called Mike and Esse give a super cloying speech about How The System Really Works and we all gag.

Frank digs into the garlic dip (fanks for that says Nicola) when Amy pops up and scares him into choking on the crudities. She saves his life! They get along famously until Lenny pops over and it gets...squeaky.

Awake later that night, Amy takes Lenny's hand, he takes that as a request for oral sex...which seems...odd but not as odd as Lenny clearing his throat after. He does that after drinking water too and that's it for Amy, it's like the Krispy Kreme guy from Sex and The City, he's more annoying than hawt.

He also picks his ears. 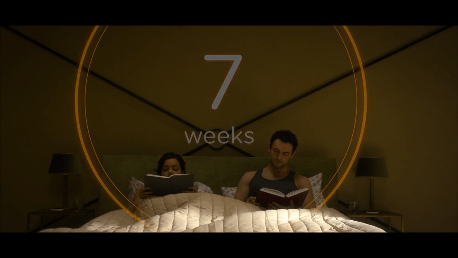 And DONE! Amy is very happy.

Another tufted banquet, another relationship. This one is mercifully short. 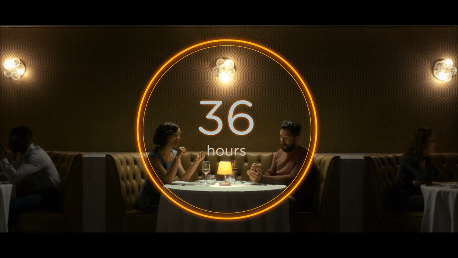 Just long enough for Reverse Cowgirl? Really? I'm no expert, but that sort of seems like something that requires practice. Amy is definitely not getting attached. The next relationship is also 36 hours and even though it's with a man who clearly does Ab Day every day at the gym, Amy looks bored. He looks disappointed in the shortness of their time together.

She cycles through another 36 hour relationship, this one was particularly cute and seemed similarly disappointed in the brevity of his time with Amy.

Nicola and Frank are finally done. FINALLY. Not even one word goodbye.

Frank waits at a red tufted banquet, it's Amy, yay! They talk a bit about their relationships past, Frank frustrated and living with someone he hated and Amy screwing guy after guy (basically a Haircut) and how boring and terrible it was for both. These two actually like each other, so they agree to not check the expiry of their relationship, shaking on it.

Now they're in the cabin and the chemistry is palpable, so is the connection.

They're wondering about The System now, Amy thinks it's completely random and it grinds down the will and standards of the users until they just accept whatever comes at the end, then spend the rest of their lives trying to convince themselves they didn't.

Someone smarter than me could make the argument that is dating as is relates to marriage.

Frank doesn't think it's that, he thinks The System is "slurping up" all their reactions and hey: what if they aren't even here and are just sentient AI?

A couple of other Black Mirror episodes featuring sentient AI and the moral dilemmas surrounding their usage:

They have a lovely time together, but not knowing the expiry date of their relationship is weighing on Frank. I think he's going to tap her Coaster without her consent or knowledge.

He finds out by tapping his own Coaster, 5 years. Well that's a decent period of time, not a fling but not enough time to raise children, say. Then it recalibrates down to 3 years, then 18 months, then shorter still because "one-sided observation has destabilized the expiry date."

Because he looked on his own.

You can see why it would do that, one less-happy partner dying to get out but I think in his case he just wanted to know how long he had her for.

Some men have weird ideas about ownership in relationships but I hear it leads back to the idea of brides as property.

Well, probably because he broke the promise he made to her, yeah? It's so difficult to rebuild trust.

He fesses up at one hour to go, she can't believe he broke his promise.

Oh The System is testing how Frank deals with the premature end of his treasured relationship, mostly it's a lot of crying and anger.

Montage of our couple living without each other and going through the motions, Amy even has a female partner for a bit. With almost every each she tries to hold their hands as she did Frank their first night.

Is Frank really awful in bed or can he really only just have sex with Amy properly? He and one of his partners do much better once they agree to think of the partners they miss.

Amy has been alone for a little bit, her Coaster tells her tomorrow is the day of her Ultimate Match! It's The One! Bit it's not someone she's met before.

For what it's worth, I don't believe in The One, not really. I know, nobody cares, everyone believes in The One.

Amy is allowed one last farewell to a former partner prior to her blissful ending with the perfect person. Of course she picks Franks, and once the date is set up, she skips her Coaster across the water of the pool. Amy OOT!

Amy and Frank are very happy to see each other, Frank has an Ultimate Match scheduled for the following day too but he only wants Amy. Amy only wants Frank but there is something weird going on. Neither one of them can remember anything outside of coming to The System right before they met.

They have to rebel together to pass the test!

Looking around, they slowly make for the door to be confronted by Taser Guy, then everything STOPS.

Is this Couples Therapy? How to overcome betrayals and being unsure of being with "The One" in your marriage? YOU HAVE RIGHT AWFUL TIMING IF IT IS, NETFLIX.

The world disappears, Frank and Amy are surrounded by images of themselves, 1000 simulations are completed. Frank is Amy's 99.8% match!

"Panic" by The Smiths plays us out, mostly just the lyric "hang the DJ" which looks like...okay, sit down, this will take a bit and maybe it will take us through our analysis. Morrissey (whose music I adore and whose person I do not) was frustrated with the state of pop music in 1985 and wrote Panic about "burning down the disco" and "hang(ing) the blessed DJ" because the system meant nothing. There was no authenticity to the music he would hear (I have to agree with his assessment of 1985 music, fun though it was), no real emotion or connection to life as he experienced it.

Obviously we're meant to value the imperfect way we meet people and create and grow relationships, but that's not what Amy and Frank did here either. At the end, Amy still had her phone pointing out a 99.8% match between her and Frank, which was sufficient enough for her to smile around her nosering at him.

Is this episode poking at online dating apps? I've never used one, but I did do regular old online dating one million years ago pre-marriage. It seems as though apps would just make it easier, but to be honest it sounds horrific. Do computers make dating easier? I guess if you're willing to share your whole being as we see here, but you can't account for chemistry, can you?

Would you prefer to know if there was an expiry date on your relationship? Would you pull a 7-person train because they were all short term and you knew it? It did feel a bit as though the 36-hour dudes were all to reinforce the meaningless quality of life Amy was not enjoying away from Frank.

Was Frank and Nicola's one year relationship meant to represent coupling for convenience? I thought closeted men marrying for a family in that scenario, or arranged marriages in countries far away. Or just together for the wrong reasons? You don't really know what you need in a long term relationship before you have one, it's like buying a stroller. You think you need a zillion cupholders and pouches that zip, but really you need big tires and a large underbasket. But you don't know that until you've gotten one stuck in four inches of mud and the baby's thrown up all over the zipped pouch. So there's something to testing out relationships, anyway.