So here are our Final Four:

It's been a long road, hunty! From 15 to four, let's find out who's going to drag it across the finish line!

Chris (with the best voice EVER - I've been waxing ecstatic about it since Day One) explains his scary turn in the bottom last week; he made ravioli for the first time and it went very badly.

He stepped out of his comfort zone, which they liked, but also didn't know how filled pastas work, with fillers and whatnot, so it did not go off as planned. He was showcasing his journey but with emotion instead of technique and he barely squeaked into the Final Four instead of everyone's best friend Bruce Kalman. Seriously, almost every single guest and judge on this show knew Bruce.

Joe is very excited, he thinks this is when he has to start trying and that's just part of why he is not my favourite. Oh I know he's joking, whatevs, he has the skills to pull off the win for sure.

The chefs head to their swank pad in Telluride, it's super fancy! Chris is looking for Ricardo Montalban.

Carrie tells us she moved to Colorado because she was a good skier, she felt inadequate and now she relates that to her time on Top Chef. She doesn't feel she measures up but maybe she just doesn't see herself clearly.

Host Padma Lakshmi has left them a note, they're to go to the New Sheridan Saloon in the morning, which Carrie calls a "cowboy bar" and Joe likens it to the OK Corral.

Head judge Tom Colicchio and Padma are waiting for them inside, as is guest judge Wylie Dufresne. 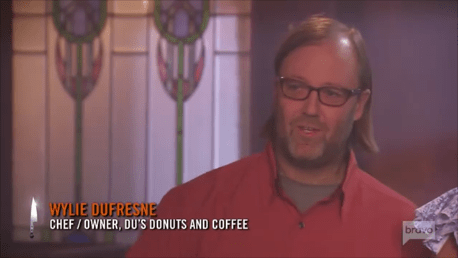 Adrienne is excited but nervous, Wylie Dufresne is a big deal in New York.

Padma explains their first challenge, it's making something with Sarsaparilla in a way that is fun and unexpected. 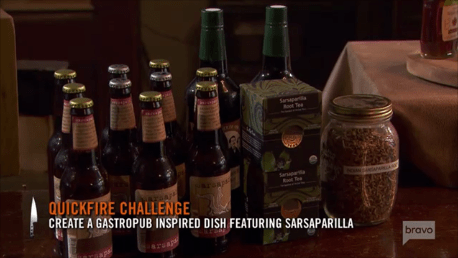 Chris lucks out on the knife draw again and gets first pick of the categories: he chooses ribeye steak. Carrie chooses pork and Joe deliberately takes the fish so Adrienne doesn't get it.

Adrienne's kind of a big deal with fish (when it's salted properly).

That leaves Adrienne with chicken, then they do veggies and go through everything else. The winner of this Quickfire gets 10k, wooooo! Now we getta find out (the third) winner of Last Chance Kitchen, was it Joseph Flamm, Brother Luck or Bruce Kalman?

It was Joseph! Yay! I liked Joseph! Everyone is very happy to see him, he's Adrienne brother from another mother!

Nobody's very happy when he realises he's taking one of their ingredients, though, and I get it. He takes Carrie's pork and now all she has is onions, lemons and honey.

It's really not, I hope there's something decent outside in the basic pantry for her to work with. They hit the street while people watch from behind barricades.

Joseph isn't familiar with Sarsaparilla so he's doing a lot of tasting, calling out the ginger and vanilla notes. That's the difference between a chef and me, who's gagging on the sweetness from here.

Carrie's still pissed about Joseph taking her pork, but she's working on a French Onion soup and she'll probably do well. She's very good at coming back from adversity.

Chris is making chicken fried steak with a Sarsaparilla gravy and wow, I almost wanted it just then. I am curious as to what a ribeye (fave cut of beef) will be like in a chicken fry, which you normally do with a much lesser cut o'meat.

Joe is making a cold soup, but he's worried it won't be cold enough so he's working through some strategies. Adrienne is making a sarsaparilla-glazed chicken and that sounds so sweet my whole face puckered.

I'm just impressed that Carrie came up with a dish involving lemon, onions and honey. Time's up! 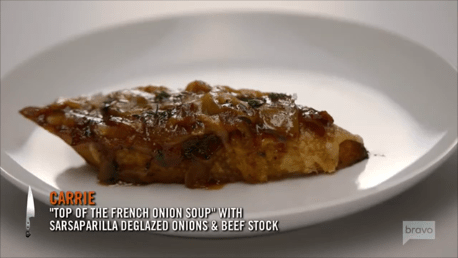 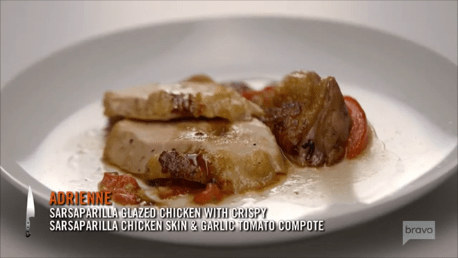 In the bottom were Adrienne and Joseph. The chef that gets $10,000 is: Carrie?

The chefs are informed of their challenge, it involves altitude and having at least one baked element. There's another guest chef coming, I didn't catch his name yet but apparently he's kind of a big deal.

The chefs strategize on their way up the hill, Adrienne is still working on finding her own voice as a chef, the voices of those she's worked for are still there.

Carrie explains the problem with baking at altitude to us; everything takes twice as long and nothing rises because there is no oxygen. She has some ideas, but nobody knows really what to do.

I still don't know what this fancy chef's name is, but he has worked at a restaurant 18,000 feet above sea level so he's got some important information to pass on. You not only have to bake longer and rise longer, you need more eggs in egg dishes for structure.

Joseph explains his dish to Tom et al, but since he does it over his shoulder, nobody looks impressed. Hey, he's working heyah!

Chris's cornbread gets good reviews and then we're onto Carrie and her planned beef wellington.

Everyone is testing their dough, if Carrie doesn't get it right, she'll make a honey cornbread. That brings Chris's head up, I find it so offensive that his carefully planned meal element is a backup plan for her and I honestly can't say why.

It's as though she's saying: if she can't make something awesome and difficult, she'll stick with someone easy like Chris's and just:...

Now she's decided to not do beef wellington anyway.

Hold on, and she's doing fava beans too? Like Chris?

The chefs go up another 3000 feet where Chris has a scare with his cornbread. It takes twice as long to bake but turns out well, so hopefully everyone else's does as well. You'd hate to win against something to do with altitude.

Tasting time already! Gail Simmons is there too!

They're just messing with me now, putting names on every person BUT fancy English altitude chef possibly named Paul Something. Paul is disappointed in no beef wellington.

Joe made a puff!

Adrienne is so happy with her meal, she is all about the fine dining. They LOVE it

Chris struggles to get his timing right, I can barely watch. When asked, he backs up his food.

Tom calls everyone back in, this is the best food they've seen all season.

The top three are: Joseph Flamm, Joe Sasto III and Adrienne, which means..

Chris against Carrie. And we know Carrie wins all the fcking time, with TOAST even. I will try not to get ahead of myself, but I am not happy. Not happy at all.

Anyway, the winner of this challenge is: Joe Sasto III.

Damnit. I really hoped that Adrienne would take it with her lobster and caviar. I guess they didn't think she was pushing the envelope.

Ahhhhh I cannot watch!! Will Chris make it through? Both he and Carrie got great reviews but fancy Paul is really leaning heavily on the fine dining aspect.

And going to the finals is: Carrie

What I mean is: congratulations, Carrie, you've done a great job of winning this season and it seems like the judges really like your toast.

G'bye Chris, I'm sad to see you go. I was looking forward to you taking this whole ball of wax. He's very gracious.

Until next time, which is the last time this season!