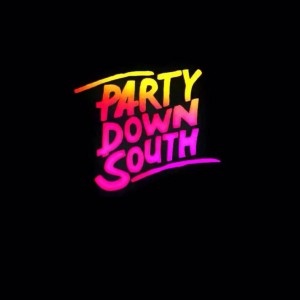 Welcome back to the latter half of the last season of Party Down South! Sorry I'm late, I fell in lurve with another show for a hot minute, but I'm back, baby! Swearsies! Rolling after the break

Last week we left Mattie sans shirt and Lyle and his beer belly cuddling in bed and Bubba and Tiffany fighting like crazy but he's got a surprise trip planned to see her.

Lyle wakes up to find nakey Mattie in his bed and bails, he JUST got out of a relashie that ended horribly, he doesn't want to rebound with a good friend. Well, when he says it, it sounds more country and cool, but that's what he meant. Mattie slinks back into her bed, acknowledging she shouldn't have been in Boudreaux's bed. Good thing they didn't spend a whole episode on that last week!

They're going on a boat! That means coolers full of terrible beer (I am an unrepentant beer snob - hipster craft brews or NOW'T!!) and funneling and Tiffany doesn't wanna go. Murray and Walt perform a series of exorcisms on hungover Tiff, but she ain't going!

They get on the Good Times, Boudreaux is duck calling and funneling and nobody on the beach wants anything to do with any of them whatsoever. Murray figures that between his beers and Lyle's duck calls, everyone figures they're Duck Dynasty HAHAHAHA. I bet they do!

Sheeeeshit. Lyle Boudreaux, I do not like to body-shame anyone, I DIG bellies, and I know you've been engaged for awhile but you look about 11 months pregnant. If you want to throw bad lines (he loves the way a woman's hair flows. while in a bun), you had better get your beer-laden bum back in the gym.

He's introducing himself up and down the beach, hitting on everything with a vagina, mostly by listing every single thing he knows how to cook and what condiments he enjoys (horseradish elicits a confused nod) and I'm kind of excited to get to know Lyle! He's been so wrapped up in his tanking relationship that I have no real sense of him at all.

A gaggle of the boaters are from Europe, which Daddy correctly identifies as a continent. Murray and Walt think that's hilarious, because Europe is clearly a country (it is not) so Daddy sings them The Continent Song and we're reaching, hey?

After Lyle went ahead and laid down all that groundwork, Murray sidles up to a pretty young woman to be a "WingMan."

I had to put that in quotations because I've never seen a wingman rest his arm all the way across someone's thighs before asking for a number, to give to his pal, of course. Lyle doesn't want it anyway, he's about mingling, he ain't calling nobody.

Tiffany is calling Bubba and getting his voice mail (cuz he's on his way there!!) she's all bummed.

The guys all wanna go to a piano bar and these gurls are so dumb! They have no idea how much fun those are!!!! I would! Okay, maybe I DID live in one for a while in my twenties. This is also the day Bubba arrives, squee!!!

Hannah's on the phone with Cody when Bubba shows up, they just have to sneak him in! All I can say is that if she didn't know, she did her hair for the first time this week, so....she finds him hiding in her room with flowers and she launches into straight Kardashian "oh my gaaaawwwww" "what the faaaaaawwwkk??" awwww

Hannah and Mattie are congratulating themselves on not spoiling the surprise, even old sarcastic Walt is impressed, atta girls! Tiff's a little nervous, though, they haven't been talking lately and there was that whole losing-her-shite-over-her-ex-banging-her-friend thing...Lauren's pissed because she didn't know Bubba was coming, she's Tiffany's best friend!

They're going paintballing the next day! That's not a verb!

Tiffany is making her bed and telling tales out of school about Bubba (he got whiskey... genitalia, the last time he visited while she was on "vacation") while Daddy waxes poetic about wanting to find a young lady he can bend over a piano with a porkchop on her... bum. And they're off! Except Mattie, who doesn't feel well and Hannah, who's keeping her company.

Hilarious cab ride to Savannah Smiles, the piano bar. Lauren "I want you to be loud like at home. I'll be over in the corner rooting for you" in response to Tiffany and Bubba rubbing on each other in the back.

This doesn't look like any pianner bar I've been in, it looks exactly like a honky tonk. I've yet to see a piano, everyone's doing shots and I've my eyes peeled for an electric bull.

Tiffany's trying to get romantic with Bubba, but they have ZERO chemistry. This can't be a very long term boyfriend. He seems hella immature and she has no sense of humour, so I just don't know about these too. Strange body language.

Daddy gets in an arm wrestling competition, Lyle puts up $60 and after Daddy wins, the money disappears. Lyle is PISSED, but if he thinks asking a bunch of drunk guys if they took his money is a good strategy... He gets into shouting / pushing match with an older guy and Lyle is kicked oot.

Lyle is not dealing with his emotions very well, he's drunkologuing at Tiffany and Bubba and then breaks down in tears while Tiff comforts him. Break ups are tough, y'all, even in bad relationships.

Tiffany and Bubba are READY to get at it, woo! And Lyle decides to call Santana to tell her "fcuk you" and yeah. Drinking just amplifies everything! He cries and breaks stuff in the back yard, which is where Walt finds him and after a long pause... gives him some invaluable manvice about Lyle's relationship with Santana, wait for it, here it comes, he's been thinking about it for awhile now and: "fcuk it." I mean

Daddy is drunkenly eating his way through the fridge, muttering "get it goin"" while licking ice cream directly from the scoop and all I can feel is my tongue freezing to the metal.

He tries to do a confession, but he can't stop sneezing and it's over. Is it bad that I can't really tell when Daddy's drunk or not? He's just the same incomprehensible "get it goin" jackwallet regardless.

Paintballing (not a verb!) day! Everyone' 'CITED! Walt's even switching up his baggy jeans and white t-shirt ensemble with a bright pink spandex shirt and skinny jeans. They all laugh and laugh and laugh.

It's Boys v Girls at Paintball; Mattie shoots herself I think? And then they separate into teams and Boudreaux takes off like a NINJA! Like a Louisiana Ninja in a red shirt the doesn't quite cover his belleh. Hannah whines, all the girls run out of paint, it's all over.

Back at the house, the girls are comparing war wounds, the boys got them pretty good. Lotta private area injuries, huh. Like their bathing suits cover these paint ball marks.

Party time! It's their last Saturday night in Savannah, they better go out, just for something different! First Tiffany and Bubba have to get it in and Lyle has to twerk

Mattie swears she's gonna get some Vitamin D, but she didn't even need to say that, she's wearing shorts.

At the club everything is hopping and Mattie is rubbing her shorts all over a tiny guy with a big beard that looks very much like he's trying to figure out how to mount a giraffe. He's so energetic, though! He'll get there! Walt and Daddy are surrounded by a wall of blonde sorority types, who ask Walt if he's married? Hayulll no! "That's good. You get all the vagina you want" and er-ooh, was that an offer? A coupon? A pronouncement from on high? I can't tell!

Murray's cuddling in the corner, he's always got a lady on his lap. He's adorable and has the best personality of the bunch though; I get it. Mattie is pounding shots, however, so it's not going so well for her. The girls are worried. Er. Mattie find a guy with a pixelated face who she invites home, telling him she'll show him a good time (even though she normally doesn't do guys in white pants after Labour Day) and then, when seeing Tiffany and Bubba freaking, "who don't you go home and take me like that?" I mean. He leaves because she's acting like she's charging, and like, not a lot.

Mattie is asking EVERYONE back to the house, including some New Yawk looking dewd that isn't realy into it, even after she tells him she's really good in bed and they make out. He walks away with a "I'm good." That's just rude, bruh. Props to these dudes for not taking advantage of this situation with this extremely drunk young woman.

She doesn't wanna go home, she doesn't wanna LEAVE! There are more people inside the bar to call "p*ssy b*tches"!! They get her inside eventually, kicking and screaming, and we oot!

Just one side note tonight: when Mattie was making out with New Yawk, she had her hair covering her face and his, I'm wondering if that was when she was giving him direction to pretend to turn her down so she could go on her "p*ssy b*tch" rampage. I assume parts of the show are scripted or directed, that looked hella odd to me. Could be wrong, though, it wouldn't be the first time. Peace, love and paintballs to the wobbly bits, cheers!

**all pictures from giphy.com