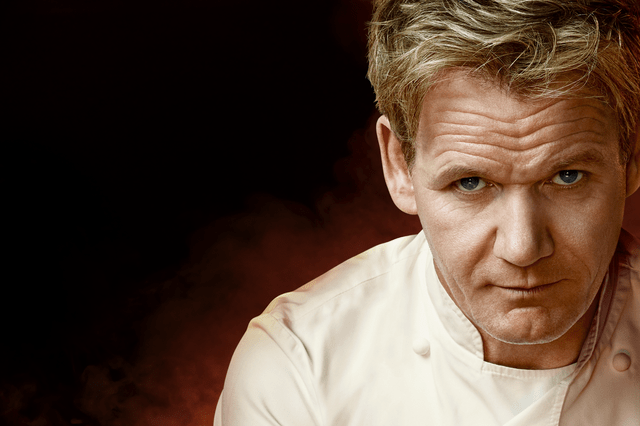 So yay, we're back in Hell's Kitchen and praise be to Jeebus, we got rid of

Jackie, the stunt-casting from actual (not actual) Hell. Yay!! Ashley is still shaken from her close brush with elimination and by what Chef Ramsay said, about maybe her having two dads with restaurants not necessarily being a blessing. She cries on Jared's shoulder while Ariel rolls her eyes and says unkind things in Interview.

The next morning is an early one, they're doing a parking lot challenge again! Marino is outside in an ice cream truck and Chef Ramsay says they've earned a treat! Which means they're about to get "fcuked up" says Manda, given Gordo's evil grin. Marino's got a little ice cream man outfit on and Kristin must be into cosplay 'cause every time he dresses up, she wants to take him home. Awwww! I mean ewww!

The chefs all get a tiny ice cream cones and YAY!! It's my favourite part! Blind Taste Testing, but this time with ice cream! Lessee who's gotta palate! I bet Dannie and Ariel knock this OOT!

Given that it's Hell's Kitchen, there is also punishment for the first time! I hate what they're doing to this show, but never mind my kvetching, if someone gets three wrong answers, a team member is gonna get shot with ice cream toppings. Get 4 wrong and there's whipped cream on top! Dannie instantly "this is gonna get in my hair" and yes it will. And it will not come out, either.

First up are Ariel against Frank; Ariel gets 2/4, Frank gets 0/4 and Manda gets shot with cherry sauce, right in the belleh, then frosted with whipped cream, which she cheerfully smears all over Frank after. Snickers, Frank?? Snickers is not an ingredient! Peanut butter is, though!

Dannie tells Jared to watch out for her hair, it's her thing, Jared! WATCH THE HAIR!! DO NOT MESS WITH THE HAIR, JARED!! And he's against Ashley, who gets 2/4. Jared does NOT do well, identifying only 1/4, so Dannie gets shot, but she doesn't get "creamed" as Chef Ramsay puts it. That sounds dirty

Kristin and Manda are up next, Kristin crushing it with 3/4 and beating Manda with her 2/4

Ariel has to taste again, she's up against Dannie and the Blue Team only has to get one wrong and that's it, Red have won. First up is Green Tea, Ariel actually spits it out, saying "that was mean. Mean" while shaking her head hahahaha. Dannie indeed does get it wrong and that's it Red have won! They finish it off anyway, with Debbie getting back at Jared by getting absolutely zero and he is a MESS.

Red gets to go on a shopping spree at Roland's Gourmet Kitchenware; they get two thousand dollars to shop yay!!! I cannot even say how exciting that would be!

The Blue Team will be breaking down extremely stinky (?) Durian fruits, which makes everyone groan. It's illegal to even open up a Durian fruit in Singapore, dude.

The Red Team is going nuts in the kitchen store, it's just like William's Sonoma! Kristin in particular is excited, going $100 over her share. Get out the debit card, lady!

This is Durian fruit 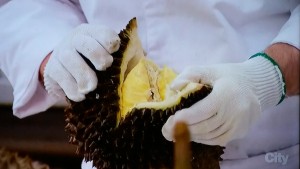 And I've never even heard of it, but I gather it's hella rank. Manda calls them "coconuts from Hell" and yeah, how DID people decide to start eating this?

Frank is all excited because the dessert they will be making out of the coconuts from hell is Mochi, a Korean dish. He lived in Korea for 18 months, but has never made it before. He's following a disinterested Chef Aaron around telling him his life story, he really like Chef Aaron. The feeling is clearly not mutual. The other members of the Blue Team think he's brown-nosing, but I think he legit loves Chef Aaron; he does well with people to look up to and at; Military, see?

Everyone is prepping like mofos, Chef Ramsay warns the Blue Team that he's always watching and listening; he wants to see teamwork and how they treat each other. Frank, if you had half a brain (you know, the half that doesn't mind working with women), your ears would have perked up right then.

Gordo tells the Red Team to keep their focus and not lose it, they only have three chefs left and that's no joke. Service!

In the dining room, for famous people we have Meredith Baxter Birney from Family Ties 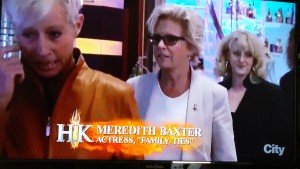 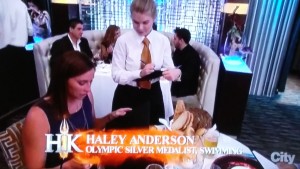 Red Team's first appies are up and we all hold our breath: and it passes! Yay! Over in Blue, I'm worried because there is fish. Fish as an appetiser is no bueno. And Dannie is messing up cooking times, so everyone is getting screwed. They get it out, though!

Ariel figures that she, Kristin and Ashley are the top contenders for head chef at BLT and she must be watching a different show. Her for sure, but Jared is much more likely and even with Kristin's palate...not super impressed thus far. And she screws up the next orders of risotto, throwing the entire team in chaos.

The Blue Team (even with fish as an appy) has finished all their starters already and is moving on to entrees. They're communicating well, but Manda's messing with the snapper sinks a table. Chef Ramsay stares at Frank for a full minute while he nervously refires and tries to figure out what Gordo wants out of the corner of his eye. You must bounce back! 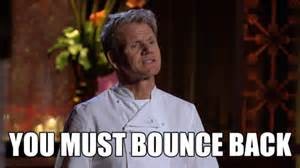 He can't get past Manda screwing his snapper, and honestly, if he's the fish station, why is he always asking Manda to look after his fish? I mean. Chef Ramsay sends out the refire, but it is RAW and the table sends it back. I am wincing already.

The Red Team is playing Musical Stations and it's not going well. Three chefs is not working all that well for that volume of food going out. HOWEVER, I have seen one accomplished sous chef (Andi) push out an entire completion of menu service, so it is possible. Just not tonight. Apparently. Kristin is telling us in interview about her divorce and how she's grown and that's just out of the blue. Is she leaving tonight? Is that why we're getting a hasty pudding backstory? Heh. I said pudding. On a cooking show. Heh. You get it, right?

Kristin brings up green beans when Chef Ramsay wanted asparagus, its all very shouty from there on out in the Red Kitchen.

Blue is having a similarly tough time getting STEAKS out and I mean. Steaks! Rebound Jared!! And then he gashes them, because they're thick and he can't tell if they're cooked and Chef Ramsay is FURIOUS! No gashing!

Chef Ramsay runs back over to Red Kitchen to yell at them for awhile. He doesn't think Ashley is engaged. But the proteins are gorgeous, yay!

Back in Blue, Jared's third refiring of steaks is making it difficult for Manda to keep up, she has to keep re-starting and it's not going well. Not much is going well tonight! Kitchens are so much about momentum, which is why everyone watches the first ticket like a hawk. A single refire can put the whole kitchen in the weeds, let alone 3 in a row. Bounce back!

Sure, Jared's and Manda are doing poorly, but I'm pretty sure Frank's juvenile laughing at a desperate Manda is counting much more heavily against him. Jared makes the mistake of pointing out that he's managed to not gash these four steaks (the third time 'round) so Chef Ramsay humiliates him in front of the dining room.

Red Team is on their last table! Bring it home, ladies! They do and Gordon compliments them on a great service. Blue actually manages to complete service, but they will be putting two people up for elimination. I'm guessing Frank and Jared but I bet Manda comes up a lot.

I cannot see anyone BUT Frank going home, but Chef Ramsay has a better idea of how well she's doing than I, so we'll see.

Blue Team puts up Jared and Frank; Jared thinks it's ridic, but Chef agrees with me about Frank: he was running the fish station, why does he not take any responsibility? Frank gets sent packing, where he decides to give us one last speech about how he hates women and carry on, Frank. Don't let the door hit you on the way out.

And that's it! Only one man left, so we're practically guaranteed an all-female finale, woo hoo! See you next week!