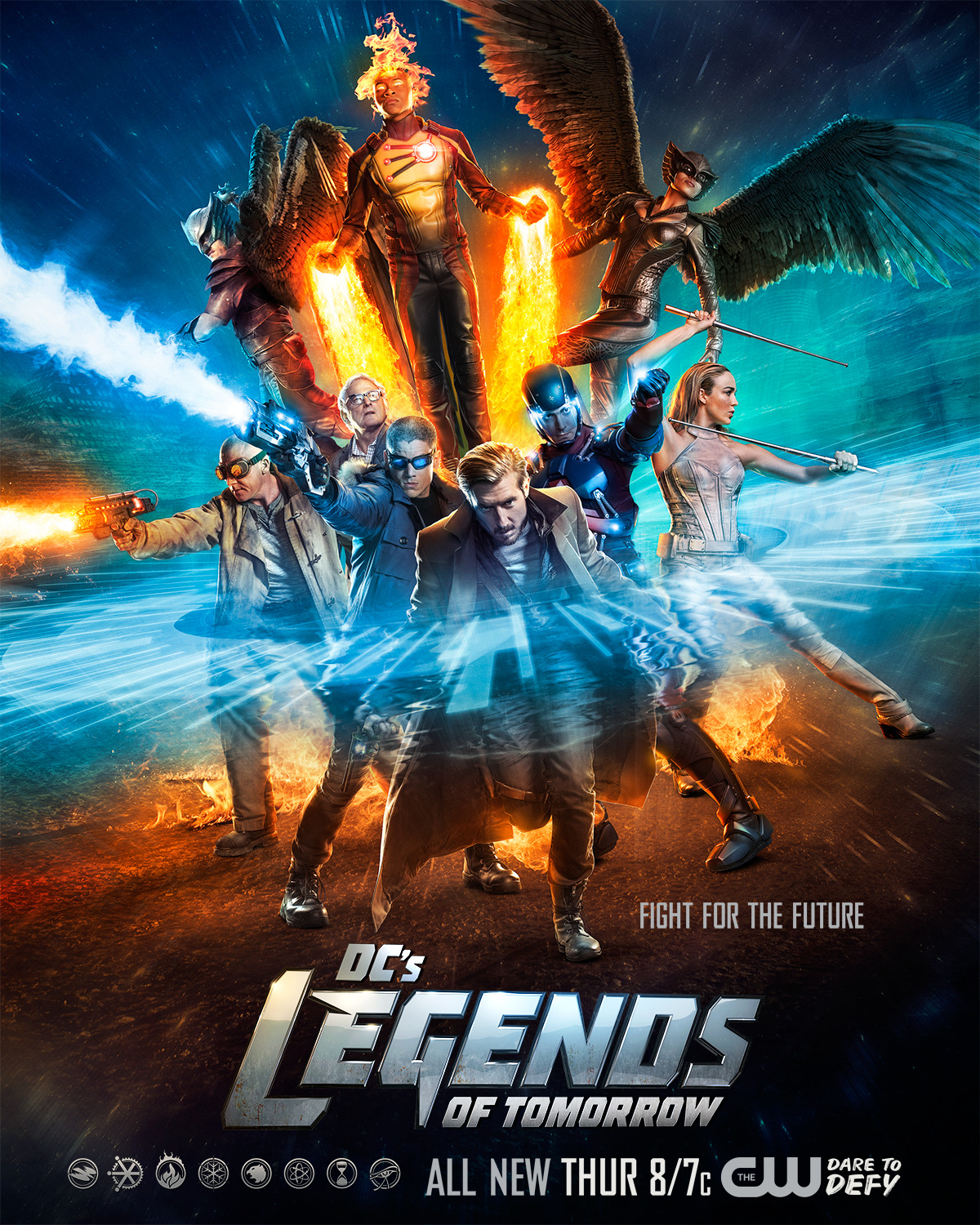 We left our Legends split last episode, with Chronos taking control of the ship, stranding Sara, Kendra and Ray in 1958. What we didn't see last time is Chronos kidnapping Leonard and taking the Jump Ship, sabotaging the Waverider and leaving it stranded in the time portal.

Rip tells Martin and Jax to buckle up, they're in for a very bumpy ride. Rip has had to reboot Gideon, and until she comes back online they are in free fall through time, the only way to keep them from being stuck in there forever.

Ray convinces Sara and Kendra that the Waverider will return to the same moment, they just have to stay where they are and wait. Sara believes that they're not coming back, and Savage is still in Harmony Falls, it's too dangerous for them to stick around. Sara hot wires a car and they high tail it out of Harmony Falls, much to Ray's worry. How will they find them if they're not where they left them?

They set up an apartment in Hub City, while Ray works on a Time Beacon to signal the Waverider. Ten weeks pass and the beacon fails to work when Ray finally finishes it. Sara has had enough, and feels that she is an outsider, seeing as Ray and Kendra are very much a couple. She tells them thinks the beacon is a waste of time, and thinks the others are all dead. She needs to go somewhere she belongs, and packs her bags.

Two years later, and Kendra and Ray are still in Hub City. Ray is working as a physics professor, and Kendra a librarian. They're happy and have built a real life for themselves, and have a second anniversary picnic in the park. Ray gives her a gift, and it's the Time Beacon, which Ray is offering to destroy and finally give up his obsession. He tells Kendra how happy he his and begins to pull out a ring, when the beacon starts to pick up a signal.

On the Waverider, Rip and the others come out of their free fall and are shocked to discover it is 1960. The ship got as close as possible to their last point in time, but considering the damage it suffered, it couldn't go back to the exact time.

They board the ship and Ray still can't get over the fact that they've been gone for two years, but it's been hours for the others. Ray is struggling to let go of his life, and the students that count on him. Kendra tells him it's what they've been waiting for, and can finally be themselves again. The others tell Ray and Kendra what happened to Snart, and they also try and work out where Sara could have gone. Kendra brings up the very valid point that Chronos could have taken Rip, but chose Leonard? Well I would have chosen that particular silver fox as well, okay lady?

On the Jump Ship Leonard wake up cuffed to a rail and Chronos tells him that there has been a anomaly in time in 1960. It seems Leonard's friends survived, but what would they be doing in 1960?

Ray asks to go back to 1960 as he needs to grab his Atom suit, and asks if Kendra has anything she wants him to pick up. She says she doesn't need any old junk, and there is nothing urgent she needs. Martin offers to accompany Ray to pick up the suit.

At Nanda Parbat, Sara is training back with the League of Assassins under Rha's al Ghul. The place she first learned her skills back in her normal life. Rha's is stunned by her skills, and tells his young daughter Tahlia to watch and learn from her. Tahlia later goes on to be Batman's missus, just so you know.

Leonard asks Chronos why he took him and not Rip, and Chronos does the big reveal. Chronos is Mick Rory!

Mick tells him that even though he chose not to kill him, he was left alone in that forest for a very long time. He was weak, and had very nearly lost his mind. He was eventually picked up by the Time Masters, and taken to the Vanishing Point. Time doesn't exist there and he spent lifetimes being restored and trained by them. He was more than happy to hunt the Waverider down when the Time Masters asked.

Ray is put out that Kendra is so happy to be back on the ship, but she is just excited to be herself again. He tells her he feels like they're moving backwards, which gives Kendra an idea about where Sara would be. Kendra tells Rip that she thinks Sara has gone back to the League, and he asks Gideon to check the Shadow Record. Rip studied the League as part of his Time Master education, and has a list of every member of the League dating back to 3200 BC. They track her by her League name, Ta-Er Al-Sahfer, who joined in 1958.

Leonard tells Mick to just kill him already, but Mick has plans for his sister instead. He wants Leonard to watch her die over and over again. Mick gets a new notification that the Waverider is now heading for Nanda Parbat and sets a course. The most beautiful thing to Mick is no longer fire, it's vengeance.

At Nanda Parbat, Rip decides stealth is the order of the day, so he goes in while the others guard the exit. He makes his way to her chamber, where she is sleeping. She wakes with a knife to Rip's throat, and is shocked that he has come to get her after all this time. She takes him down with some assassin moves and alerts the guards that there are intruders. It seems she is a full member of the league once more. The others go looking for Rip, and are captured by Sara and more guards. She orders that Jax and Martin are kept separated and places them all in chains in a cell. She ignores their pleas, and informs them that trespassers are to be executed.

Rip explains that she is suffering from time drift, she has spent too long in the wrong time and has lost touch with her identity. Kendra admits that the same has happened to her and her wings, that she hasn't been able to use them since she started living in 1968. She and Ray get into more debate about their relationship, and he apologises that she felt she couldn't tell him the truth. She tells him they were meant for something bigger than living in Hub City. Rip has an idea, he will invoke one of the League's traditions in hopes of setting them free.

Leonard asks that Mick loosen his cuffs before heading off the ship, and that once the Time Masters have what they want they will toss him aside. Mick tells Leonard that he tossed him aside, and that there's none of the old Mick left for him to appeal to.

Rip and the team are taken before Rha's Al Ghul, and Rip demands a trial by combat. He hasn't bargained on Rha's being able to choose his own champion, and is taken aback when he nominates Sara. Ray offers himself as Rip's champion, but he chooses Kendra instead. Rha's cuts her chains with his sword and they face off. Sara gains the upper hand and lands some blows with her sword. Kendra's wings finally unfurl and she slams Sara into the wall. Sara stabs Kendra though, and Kendra falls to the floor. Kendra then reminds her that she is the White Canary, and Sara stops herself from landing the fatal blow.

Leonard manages to work his way along the rail he is cuffed to and reaches a cold gun on the wall. He still can't reach with his hands and resorts to using his feet to fire the gun at the cuff. Leonard's hand freezes and gritting his teeth, he smashes it, releasing himself from the cuff.

Chronos arrives at Nanda Parbat and shoots his way through to Rha's Al Ghul's chamber. Sara requests that Rha's free the team, and Rip adds that the League will fall without their help. He cuts their chains and Jax and Martin merge into Firestorm. Sara throws Ray his suit that she has previously confiscated and he, Kendra and Firestorm attack simultaneously. Ray delivers the final blow, and Leonard arrives just before they kill him, and beg then not to. Rip can't believe what he's hearing, and Leonard demands that Mick show himself. He refuses, so Jax rips his helmet off. They are all shocked to see that the man who has been terrorising them this whole time is Mick.

Rha's has worked out that Sara has been trained by him before, and surmises that they are all from the future. He has obviously seen stranger things in his long lifetime. He recognises that Sara is conflicted and releases her from her service to the League. Before she goes she gives him a warning to keep his future daughter Nyssa safe, she will end up being Sara's great love.

On the Waverider, Mick is in a cell, and the team is pissed at Leonard for not killing Mick. Rip assures the other's that he can be rehabilitated and reformed. Sara understands what the Time Masters have done to him, and the others eventually come around and recognise him as a member of their team that needs help.

In the medical bay, Rip asks Gideon to start the regeneration process on Leonard's hand. Apparently he took genetic material from them all for just this purpose. When Leonard queries why he didn't know this before, Rip tells him that no one had lost a limb yet. The regeneration begins, and Leonard says "Ow."

Kendra and Ray make up, she tells him that she still loves him, and is enjoying being able to make her own decisions about who she loves. She tells him it doesn't matter where or when they are, he's the person she wants to be with. She asks what he wants, and apparently he's in it for the nookie.

Rip tells them he's setting a course for 2147, where he's always known Savage was. The time period is very dangerous and he wanted to avoid it as long as possible. He feels they no longer have a choice, and they need to succeed now or die trying.