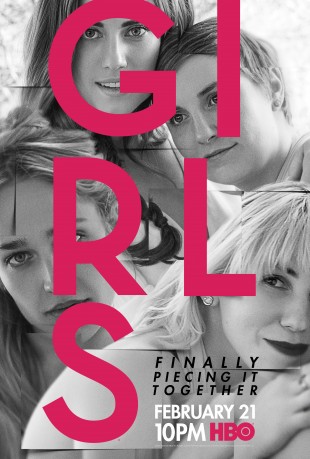 Lena Dunham teased on Twitter about another odd sex act in this episode of Girls and have you ever just wanted to take her aside and say: "you're really funny and one of the best writers in TV right now, you don't have to lead with your ladybits; we're good with all the brilliance!" Just me? But still, some people really like to lead with their ladybits and they're YOUR ladybits, maybe they're super fancy or bedazzled! Do you! Let's find out what a "slip and spread" is after the break!

Hannah is in with the principal AGAIN, even though she's a favourite there, she's forced him to take serious action by talking about personal things about other teachers with the students. He asks what is he going to have to do and she full on pulls a Sharon Stone and he freezes. I actually just said she didn't have to lead with her ladybits HAHAHAHA.

Also, I love the parts with her and her students probably the best, she's so inappropriately involved and it's HILARIOUS.

She's laughing and explaining about it with Fran later, but he...doesn't get it. It wasn't sexual, Fran, she just did it to get out of trouble! He yells and yells and it's all very hilarious except it's not. He's furious that she is showing her vagina (at full bush capacity, sorry about that) to anyone else and DIDN'T HE JUST SAY IT WAS TOTALLY COOL FOR HIM TO WHACK OFF WHILE STARING AT HIS EXES BAGINAS? Because Hannah's pics sucked? Did he ask his exes if they were okay with him still staring at THEIR baginas and bodies devoid of interesting fat deposits? (Am I over-invested in that scenario?) I just can't with Fran. He does not get Hannah.

Adam and Jessa are lurking outside the theatre where he's in a play that evening, he swears he's all good and prepared, but is he prepared to come out as a couple tonight with Jessa? Mebbe

Fran and Hannah are still fighting outside the play and I DO think he has a pretty good grasp on Hannah SOMEtimes...

The play is 38 Neighbours, a retelling of the murder of Kitty Genovese where dozens (I'm guessing approximately almost 40) heard her getting attacked and yet, nobody did anything. It's another one of those interactive plays, like Mimi Rose's from last season, yaaaayyy. Go, be silent witnesses.

Hannah REALLY wants to settle this fight, but Fran Does.Not.Fight.In.Public, HANNAH. She tries to break up with him, but he doesn't want to hear it! And goes off to bystand. Hannah grabs Ray and goes off the other way.

Apparently Kitty was a lesbian, which is making Hannah wonder if her murder was ignored because she was just another "unsuitable woman" and Ray just wants her to shut up. The actors start the play and Marnie comes in.

She asks to speak to Ray in the hallway about something important, where she grabs his hands in a really awkward way and tells him she left Desi. You know, I usually do not find Allison Williams attractive, and that's my deal, who cares, everyone has their view of beauty, but she looks fantastic here. I think because her skeletal upper chest region is covered up (no shaming, some people dig that bonerack look). She explains how she always thought they would end up divorced and now she just needs to be...*Ray leans in expectantly*...alone. Right. Well, he's sorry she's going through this, but they should probably get back in there and witness.

Dill and Elijah are hosting a party and there's someone there in a mesh shirt like Hannah! Black is def a better colour for that, though...

Dill is laying it on pretty thick with Elijah, checking in, because that's important and lamenting the emotional whiplash of his job, from orphans in Haiti to fine suits. I don't know. I bought what Dill was selling the first time 'round because I love watching him and Elijah making out, but it seems completely rehearsed and inauthentic.

Hannah is watching Adam in his role as an unhappily married witness, she walks over to the next room and I thought "oh! She doesn't care about him any more, for reals" and then she sees Jessa. Grinning at Adam from the fire escape. Hannah looks like there's a ringing in her ears.

Elijah is fetching a drink for Dill when he talks to a helpful and informed young man who fills him in on ALL of Dill's philanthropy, including screwing the downstairs neighbour and having tuxes made for someone named Muzzy so Dill could take him to a black tie gala LAST WEEK. Elijah's heard enough

Back at the play, beatniks are smoking and Marnie is wallowing and Hannah is MAD: are Jessa and Adam fcuking?

Elijah is hiding in the bathroom, Dill wanders in and they have a non-talk. Dill says he has many important friends and many work events and he blames the talk on his fame and people thinking they can say anything. I think Dill is using his fame as a lever with Elijah and I LOVE watching Elijah's face throughout, it's all of us who've ever tried to have the "are we exclusive?" talk without actually saying "are we exclusive?" I'm gonna go out on a limb and say Dill and Elijah are NOT. This non-talk ends with Dill saying HE feels better, but if Elijah doesn't. Maybe Elijah SHOULD leave, as he asked. Elijah steals all the mini toiletries (I would too!) and GTFO.

Marnie and Hannah are using one of the beds in the play apartments. Marnie patting Hannah and her "tree-hugginh cl*t-sucking" rage down when Desi bursts in. He needs to talk to Marnie! She divorce blah I told our friends blah no means no blah and he cuts her off: this is bigger than divorce. Bigger than ANYONE'S divorce: they got the call. "Alex Patsavas" and they say that a BUNCH. I had completely forgotten that they play "music" together, but to be fair, I block out a lot of Marnie's storylines. How will that work??

Alex Patsavas (music for Grey's Anatomy, fcuking killed it on Twilight, *hushed tones* Gossip Girl, O.C.) wants to use their song "Matter of Waiting" on an episode of Grey's Anatomy when someone dies. "Someone dies *excited face*?" says Marn "A principal *even more excited face*??" "montage??" and SCREW YOU GUYS AND THE HORSE YOU RODE IN ON, YOU BASTAGES. I *may* not be fully recovered from The Walking Dead season 6 finale circle-jerk last night.

Desi says they have to capitalize on this, tour the shite out of that song! Just for the band, though, right? As Hannah groans and rubs her shod feet all over the wall. We already know she doesn't have any ginch on, so, careful Des!

A very drunk Dill shows up at Elijah's apartment, he's ready to goooo. Elijah's like, okay, fcuk it, right this way hawt Dill. He protests for a bit, he doesn't wanna be with Dill like this, "like Mel Gibson" hahahaha. And then Dill falls asleep mid-beej. That happens more often than you would think.

I can't believe I ever hated Ray, although I kinda still do, so angry, but he's soooo fcuking smart and really, he has the best lines, next to Elijah. He's lecturing Hannah outside about human apathy being "one of the grossest threats to mankind. Very dangerous." *sage nod* *finger wag*.

Hannah makes all that about her, of course, she's been a witness to something she couldn't explain. Fran walks up and Ray suggests he take care of this one; he's off to do some follow-up reading, going Deep Internet.

I feel as though I would be Ray, that obnoxious intellectual and with the ability to extrapolate events into societal failing, up and out of proportion, if I just had the time away from soccermom stuff and someone to spout it at, you know?

Fran is ready to put their whole fight behind them (without talking about it at all), but Hannah is too interested in Adam and Jessa walking away together. Side note: Adam and Jessa are NOT second tier friends, they've been in the front line since the beginning and how Jessa thought that was gonna work is beyond me. This came up on Party Down South a couple of weeks ago: banging your friend's former serious boyfriend is against all the Codes: Girl, Bro, Human. Hannah tries not to cry but you can tell her throat is full.

Fran doesn't have any clue what's going on, he's still lecturing her about her attitude and behaviour while Hannah feels everything fall apart. He tries to touch her and she pushes him away violently and I am wishing with all my being that she won't cling to him to feel better, because Fran is literally THE WORST. My hopes are not realised. She doesn't want to be alone and she apologizes so she's not dealing with this tonight. This is how relationships continue.

Oh man, they really have the best music on this show, I thought it was Unsteady by X Ambassadors but it was something else I can't find. Still. Will update when I find. Peace and t*ts oot for Christmas!

All gifs were made by the awesome Veronica, except where noted!