Hi guys! Sorry I'm late, I am hoping to just blow right through and do the season finale of Project Runway in a two day blur. Who's with me? Yay!

So this is it, we're at part one of the finale already! We lost all the extry people, the last one being Cornelius and now we have our final four about the make some gorgeous clothes! Woot! let's see what Roberi, Erin, Rik and Laurence can do!

This is it! Roberi is 'CITED

And so am I once I hear the budget: $9,000 and six weeks, huntys! My favourite part is when Tim visits everyone at home, let's goooooo!

We're in Los Angeles first to see Laurence! She has a massive loft, LA must not be like New York. She's basing her collection on the idea of dark to light, Tim finally asks: what's your deal, Laurence? "I really don't know much about you." We DON'T! Her life seemed to start and end when she had Victoria at 16, she'd just been accepted to fashion school and didn't know she was pregnant. Her father was furious; they never spoke again. Laurence is clearly uncomfortable talking about this and now I feel bad for wanting to know.

We cry together as she stumbles through the rest of the explanation; her father died twice, once in her head because she couldn't take the pain any longer and again when he was in the hospital. They never reconciled. She just tries to find beauty in everything.

She also didn't use any black in this collection! What?? The darkest she went is an army-green jumpsuit (that looks just like her first winning look) and there's a cute little garbage bag (sac de poubelle), it's all very not-Laurence but I love it too! She has 7 looks ready already!

Family time! Laurence was quite clever and birthed a babysitter early to take care of her son Marley, woo hoo! I was right with Laurence until she said she was going to win this for her kids, that never works. I've seen a metric tonne of reality competition shows, it just doesn't happen, Laurence. I like your clothes, though!

Onward to see Rik, also in Los Angeles, but at a bowling alley...that's right, Tim Gunn is going bowling! And in a shocking twist, he's NOT the most overdressed person there. That would be Rik's poor cousin Myra, who is rocking a skintight gorgeous green dress and 6 inch stilettos. Rik's mama gives us some background: lookit how cute he was! 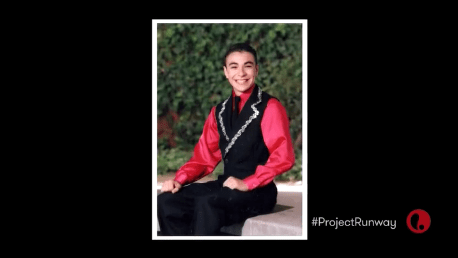 And then Tim bowls. In rented shoes on his tippy toes in a gorgeous blue blazer and plaid vest.

On to the collection!

Rik has done an unusual print on denim, with embroidery and he's going with Optical Illusions as his theme. Tim looks skeptical. He sees three collections and totally does not get how the last dress fits in at all. Something needs to happen, and Tim won't pretend to tell him what it is.

Erin's been working on her collection in Boston at MASS/ART; which she just graduated from. That's gotta be cool, have all that space and professional equipment right there! Apparently that was not quite enough, ten days before Fashion Week, she doesn't have one outfit completed. No worries, though, she's got the ten looks done in her head.

Her plan is fun, positive colours and I think Tim swallowed his tongue. That's not a plan, that's a realtor description of a summer home. She has drawings and a tonne of textiles and fabrics, so much oddness. Tim tells her she's breaking a lot of rules with this collection, he's on board and he believes! He calls her collection a Fashion Cacophony and she doesn't know what that means.

Family time! It's mostly Friend Time here, so maybe I'm missing a crucial piece in understanding Erin. One of her first bosses is there, a pediatric dentist who liked her work ethic and suggested she go into fashion. So she has a great work ethic, but she's always late, which I HATE. Enough talking about pooping in your mom, dude. Tim chalk drawing, take us away! 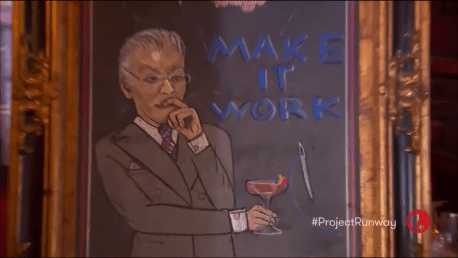 On to New York and Roberi's work! Wow, I did not realise that Roberi came right over from Venezuela to be in this competition, his English is fantastic! Seriously, go to Venezuela and try to sound like words in four and a half months! He Skypes with his parents and boyfriend back in Venezuela, it's very sweet. His boyfriend is adorable, all glasses and smiles. I am very glad Roberi's family is all good with him, that's not always the case and I always kind of tiptoe around family meetings like that. RuPaul's DragRace is always FRAUGHT.

Tim asks Roberi about his backstory; he left Venezuela (I should get a medal for spelling that correctly that many times; I can't spell Canada right for ANYTHING) and his business due to social and political unrest and violence.

They review his collection, Tim looks skeptical. He's wondering if there are too many ideas here, does Roberi need to edit? He doesn't know if this is for the same person? 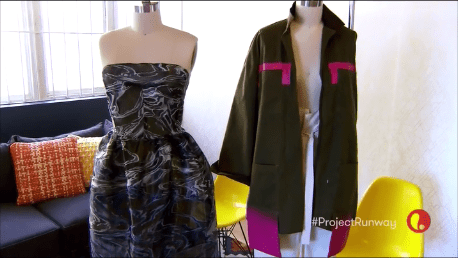 Roberi disagrees, it's maximalism and he digs it. He says the silhouette will tie together the looks and that sets Tim off on another tangent: the silhouette is so basic! No innovation! Roberi calls it "fundamental" and "classic"; I believe they are saying the same things...Tim, you know I love you, but you can't tell a designer a week before a show that his look.

He told Roberi that he's a dressmaker, not a designer and now I can't look at him. That was a horrible thing to say to a designer who is trying to explain his point of view and I don't know, Tim. I think you need to go to your room and think about it. Maybe make a card with what you said and what you SHOULD have said storyboarded out for Roberi.

The designers are all back in New York at The Henry Norman to get ready for Fashion Week, so exciting!! A night of popping bottles and then they're back to the workroom!

Everyone is blown away by Laurence's light and "delicious" colour palette and lovely clothes; they were expecting heavy leather stuff and all black.

Rik's going straight to work, no time to look at people's clothing. Roberi is surprised, but not as much as he is at the fact that Erin hasn't completely two full outfits. Not me, I'm shocked she has anything done, she only had ten days! Plus the 5 and a half weeks before that, shhhh

Tim comes in with the usual news: the designers will be presenting three looks to the judges the next day, along with a logo that they will be creating today.

Roberi's TimTique is first; it looks like he took Tim's advice..and completely ignored it. Good for you, Roberi! Never take the advice of someone who denigrates what you are doing because they don't understand it.

Tim, I expected more of you.

I will say that Roberi's clothes look like they've never met. On to Laurence!

Rik thinks Laurence's collection is too old, she thinks his is too young and everything is as it ever was in the Project Runway workroom.

Tim likes Erin's work, it always makes him smile. Whatever T. She has a jacket and a skirt with BANANAS IN VARIOUS STAGES OF PEELING.

Mary Kay makeup room time! We learned about some new products and watched people make up beautiful people. It was fun!

Hair consult time! Lots more products and pomade and sure!

I think it's interesting that Laurence feels her biggest competition is Roberi and Rik thinks it's between him and Erin. I would bet money that Erin has this in the bag, the judges have swooned over her esthetic all season. I want Roberi to win.

Runway time! But Heidi had a live show in Los Angeles and couldn't change it, so she's there via videochat. She's asked a good friend to step in for her, whoever could it be? Hi Michael Kors! I love you on Project Runway! But don't try to imitate Heidi, nuh uh, nope. 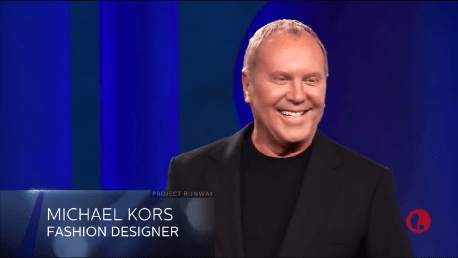 Besides Michael, we have Zac Posen, Nina Garcia (who's been rolling her eyes at MK the whole time, making me wonder) and no other guest judges!

Runway time! Roberi is up first; his logo 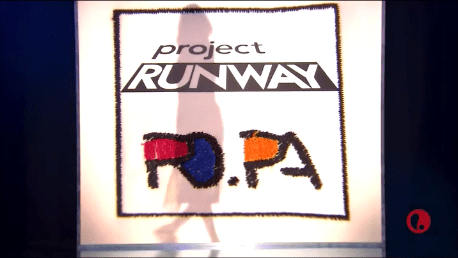 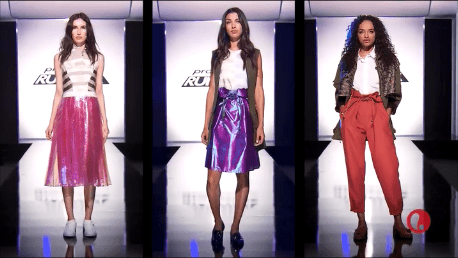 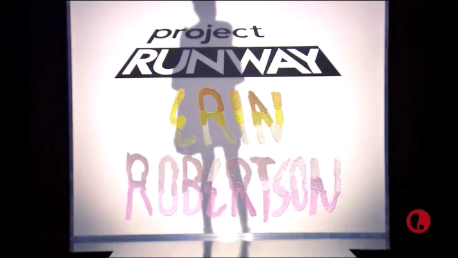 I have to say, I love the glitter discs! I fear I don't understand the other two looks, which probably means they are fashion. 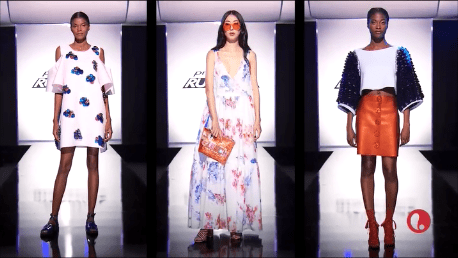 Laurence starts with her garbage bag and ends with an awesome androgynous look, LOVE that one 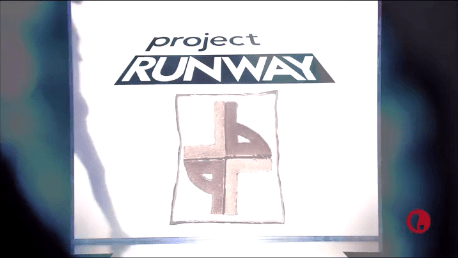 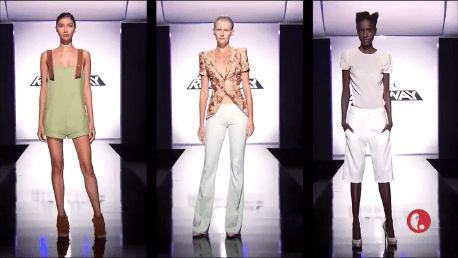 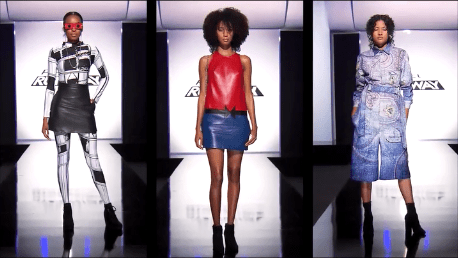 Now it's time for the critiques, with Tim writing everything down for the designers so they can really digest it later. Yaaaayyyy.

Rik is first: Zac thinks he needs to "raise the octane" and okay. Rik and I are surprised; denim printed denim paisley is too tame for Zac? Heidi sees three different girls: where's the cohesion? Michael helps him redesign his "poopy pants romper" while they all moan about the Nashville eyeshadow.

Erin: they want her to get rid of the middle, dreamy look and stick with the neoprene plus sparkle.

Roberi: Zac calls it "trash bag chic", Heidi wants it sexed up but I LOVE that Roberi doesn't do that! It's so easy to just expose boobs and go body-con all the time; gimme something beautiful that doesn't require special underwear and invasive waxing. And plus size. Call me! Nina is on Team Roberi with me, she gets it, she understands and she gives some helpful feedback! Do you, Roberi, just make it look luxe and polished and beautiful. Fix the hair, get rid of the sneakers, start smiling! Michael wants him to "juice" it, not sex it, and he loves it. Roberi is from sexy, he doesn't want to DO that and Nina gets it, she understands completely. Do you, Roberi, show your strengths.

Plus size. Just throwing it out there.

Michael gives them some practical advice too; besides cohesion, the designers have to remember: they only have 11 minutes to tell everyone what they think is important. And fresh and tomorrow and nobody knows where they're from, so it's even harder. Wow everyone!

The designers are in the waiting room behind the runway talking about how they have no time...just go now, guys! Go! Go sew! Until next time, you guys! When we find out who wins season 15 of Project Runway! Cheers