Welcome back to high fashion in low places; how's everyone doing? Ready for the Urban Jungle? Me too! Rolling Project Runway S15:E7 after the break!

Heidi meets the designtestants on the runway, how's everyone doing? Awwwesommmme which is what we would all say to Heidi Klum, but what we mean is: TAHRED. And I need to feed my dog: can I go home?

Everyone is exhausted and trying to cover it, Erin calls it a excitement sandwich with tired bread. I don't know, something like that, I zone out when she talks!

Heidi is sending them on a trip; Mah-Jing and I are skeptical. We remember the press party that wasn't just awesome rose-gold pineapples. She snuck in a challenge!

Okay, they're going to Universal Studios, that sounds fun, except that they're not IN Florida and so travel is a factor as well. I bet a day in a spa would not go amiss.

Tim's at Universal Studios Orlando with a USO suit; he introduces them to their next marketing target: Skull Island Reign of Kong. Props to Nathalia, she sells it with a smile. I'd be over in a corner screaming WHERE'S MAH CHEQUE?? but in Canadian, so, like politely with head nodding and upspeak.

The challenge is streetwear, which freaks Cornelius out a little. He doesn't do streetwear on a daily basis and it will be a bit of a reach. Jenni thinks streetwear is her jam and either way, she's here next week anyway. She has immunity. I'm trying to think of who she reminds me of... Molly Shannon?

I've actually seen Skull Island, Whatshisnose was pretty good in it, if slightly overskilled for the role. I suggest someone does the worms, make a giant cableknit sweater and add a flowered edging for the gaping maw. YOU'RE WELCOME. Erin, you do that one!

That was just the first part of the tour, though, next the designers are off to Volcano Mountain and this USO suit Mike West MUST have been an announcer before, his voice is like buttah.

The designers are back at the hotel by the pool now, they're sketching and I have no idea what Dexter is going on about, but if he leaves off the fringe: I'm in.

Erin is doing shorts? And Nathalia is inspired by bats, sure. Laurence is going with drop-crotch pants because any opportunity, amirite?

Brik's design looks fun, but I'm worried about the fabric he's chosen. It's hella designed already. However, I need to save my concern for Nathalia, who has chosen fake gorilla fur for her look. Oh gurl.

Cornelius is thinking crop top and jacket and he snags a bright yellow colour leather right from under Laurence's nose.

Back in the workroom, Tim tells everyone they have until midnight and how is that going to work?? Brik's making pants, which hasn't gone very well for him so far.

Jennie's perfecting her polite laugh, it doesn't work and we get full bore again, yaaaaay, but it entertains Dexter! I need to be more like Dexter. Laurence calls them her little TV that never turns off. Like ever.

Jenni calls Laurence a one-trick-pony and NO YOU DIN'T. I mean. Dexter is nervous about his look, he's taking a major risk on the stage and the near miss last week has him questioning himself.

Jenni's put herself on a roller coaster; she's safe, but she doesn't trust her looks. So much beige, Jenni, what??

Everyone got very excited about the cargo-pants wearing heroine in Skull Island, so most of the designers are making pants. I wish them well, none have gone great this season so far.

TimTique Time! He warns Cornelius to not go to a "Broadway version of street" kind of look and that sounds about right...he shows Tim his yellow and

He tells Corny to channel Heidi and that is ALWAYS a good idea. Tim cautions Dexter against going costumey: he wants to go for it full bore.

Brik really likes that fabric, Tim's not quite as sure, but he's not horrified either, so go ahead, Brik! Do you! I just know what happens when a designer falls in love with a complicated-looking fabric.Tim thinks Roberi's need some roughing up and Jenni needs to trust her intuition.

Tim likes that Erin's gone back to what she does best: it looks like an interpretation of a Rousseau painting. It looks like pasties glued on to fabric to me, but this is why he's the expert! She just has a lot of work to do and not much time.

Oh Nathalia. Well, I suppose flying gorilla bats COULD be considered streetwear, on Skull Island. Tim is WORRIED. The dolman sleeve is for why...?

And streetwear is what you DO as a designer? She's starting to feel her confidence wane, but her look for sure needs to be freshened up. It's elderly.

Mah-Jing is one of the few designers doing a dress, but he's still using denim, so it's still Mah-Jing! I am so bummed that we lost Tashia right before the streetwear challenge, come on! I would have loved to see what she could do.

Laurence's outfit looks great, I think her look is gonna go right to the top. Her looks are always so high level. She is focused and quiet while working, her work is on point.

The designers sputz around and work through various challenges and omigod I JUST got a good look at Erin's applique. She's embroidering grass. Onto clothes. In a streetwear challenge. Because nothing says streetwear or urban jungle like a mossy crotch.

Model fittings go well, but Erin has NOTHING done. Like NOTHING. Laurence is almost done, but BRIK: what are you doing???

Those fabrics do not go together. You even know that.

The next morning, he loves it, so do whatcha gotta do, Brik, do you. Erin has so much to do, there is no way she'll get this all done. At least it looks scrubby already, so maybe they won't notice!

Hair and Makeup time! Everyone should read Dietland by Sarai Walker - really, go read it right now, I'll wait. Every time they hustle hair and makeup on this show I think of the nailpolish colours from there. Good book, right??

Cornelius's top is fitting poorly, his model is half oot and that is not cool, man. Laurence doesn't like the way her pants are hanging and I just don't know if this was necessary

Oh hey, there are no more shots at immunity this season, what?? Dang. Judges are: Heidi, Nina and Zac like always and the guest judges are: Rebecca Minkoff from Fashion Start-up (I dunno) and HEY!! Carly Chakin from Mr. Robot!! I recap Mr. Robot! I can't wait to see what she sounds like when she's not being a dick. 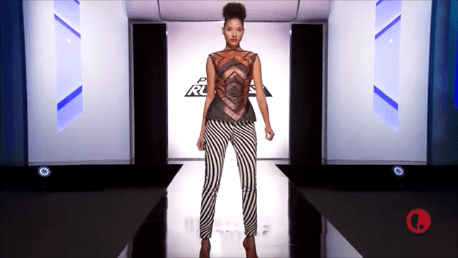 Rik's looks messy, which is about right for streetwear, right? 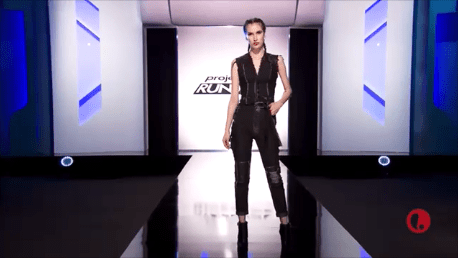 Oh Nathalia, I don't get streetwear OR Skull Island at all. I do like the pants 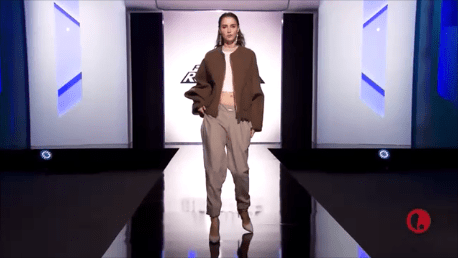 Laurence's crotch is still bugging her

Roberi has an odd feel to it 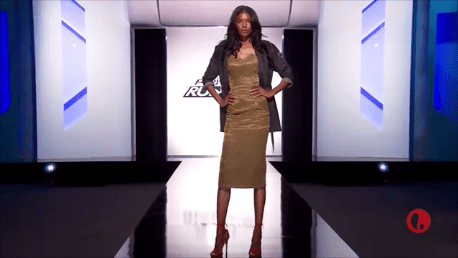 I'm sorry, Erin, I love the grey fabric, but the fact that your glued green pubes all over her crotch makes it a non-starter for me 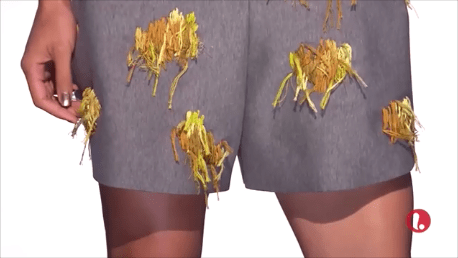 Dexter went for it! Yes he did. Why are his shoulder lumps uneven? A better model would have sold it better 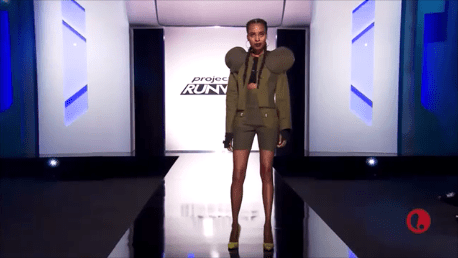 I kind of dig Cornelius's outfit! Dose pants are awesome! And I like the pop of colour in the top as well, I just don't know about the fit 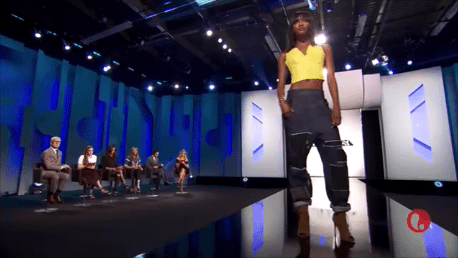 He calls it Hood Couture and I rolled my eyes so hard I hurt myself. 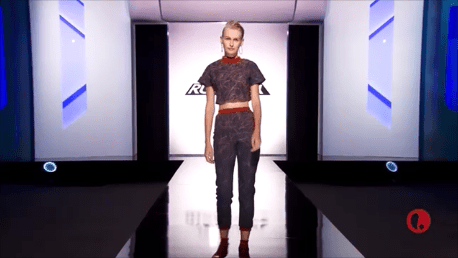 Judging time! Called forward and safe are: Roberi (we need to see something more from him, STAT), Rik, Mah-Jing (he's surprised, he thought he would be a Top) and Jenni (totally boring).

Erin: tell us about your grassy crotch look: they hate it, of course. It's a Miss for everyone. I do love that grey but Zac sums it up for everyone as Heidi calls it a cross between moss and throw-up

Dexter: Nina LOVES it all! Oh yay, you can see him breathe all of a sudden. Zac doesn't dig it, neither does Heidi. Carly really likes it and EVERYONE likes it without the jacket. Nina and Zac have a tussle and I kind of like how neither one of them gives an inch. She applauds Dexter and he reserved judgement. I am all about strong opinions and everyone voicing them clearly.

Nathalia: Heidi LOVES her look, she wants to BE that girl. Carly also wants to buy that look RIGHT NOW. Zac is all over it and that's it: she's a Top.

Brik: nobody gets why those fabrics go together; but the sewing is great! Ha. Zac doesn't understand the taste level and Nina thinks he needed to spend more time on conception.

Laurence: Hey! She did the worms! I didn't get the reference. Is Laurence's slice in the back a vagina reference? Everyone loves it and Heidi digs a poopy pant all day any day

Cornelius: it looks like a school project. Heidi doesn't like the pants and the top is so bad.

Model groping time! Carly actually takes Laurence's jacket off the model and tries it on. If it goes missing, check the Mr. Robot set you guys.

Thank goodness Nina's in Dexter's corner; she will not back down on what Zac calls Military Mickey.

They hate Brik's look, almost as much as Cornelius's, so those two are definitely in the bottom. Heidi cannot stop cackling about "one day you're in, the next you're out!" about Erin, she seems as though she's DYING to send Erin home just to prove the show's tagline.

I bet Nathalia takes it; everyone likes her look the best, even if Laurence's jacket was everything.

This week the winner is: Laurence, who takes it calmly with stoicism as usual. Yay Laurence, go make sure your jacket is still on your model

Erin, Dexter and Nathalia get to stay, and it is indeed between Corny and Brik

And out is: Brik. Damnit. He's awesome and I really liked that look after awhile. We all cry, stahp!! He's so sweet. Stay weird, Brik! He's off for a nap, I bet he is. He ends with "Project Runway is the best thing that ever happened to me" and that's it, I JUST stopped sniffling, Brik! I will miss you, my bright happy beardy non-Banff boy

Until next time, you guys! Cheers