I'm steadily running about a week behind on Project Runway, that's okay, right? Last week we lost my favourite and the week before my second favourite so it's been a BLOODBATH. Who's ready to roll into a Project Pop Up? Sure!

So that's it, my beloved Brik is GAWN and Cornelius is still trying to deal with being on the chopping block

Laurence thinks it's cool she won, sure, whatevs. I don't think she's a one trick pony as Jenni does, but I would like to see something other than a gorgeous leather jacket.

Tim is bringing the challenge to us this week; Gregory Patterson, lead hairstylist from Sally Beauty will be explaining what's shaking. This is a Project Runway first, there will be three pop-up beauty colour shops! (I don't really know what a pop up is, even though Top Chef tried to teach me last season. It seemed like they just didn't pay rent)

The pop up shops will be in SoHo, which excited Laurence (FINALLY) and the looks will be judged by people walking by. Er-ooh. Dexter and I don't know how that will work; does SoHo know high fashion? Because Dexter doesn't really do "wearable" he does "art."

Team Red Violet: Erin, Dexter, Cornelius. They try to include Corny in what I'm sure is a totally not condescending way

Team Neutral: Jenni, Nathalia, Mah-Jing. Mah-Jing is not jazzed about being the third wheel in the Bestie Booth, so

They have $600 per team to create a three look collection (ooooohs all around - that's a lot of money for Project Runway!)

Sketch time! Team Red/Violet is thinking punk (er), Dexter a jacket-dress because that makes the most sense (ooh?) and an oversized coat from Erin. Cornelius says nada, so Dexter

Team Blue is thinking geometric. Me and Roberi are dying for him to win a challenge! C'mon Roberi! Team Neutral thinks it has a lock on what they're doing, eeehhh. Laurence is also doing a jacket, this is a super outerwear-heavy episode, hey?

Mood Time! It's a mad dash and I'm confused at how much colour there is in Team Neutral's designs. Nathalia and Mah-Jing just butt heads the whole time. Oh I'm worried about Cornelius and Team Red; TWO plaids?

Jenni and Nathalia are doing great, working as a pair and leaving Mah-Jing entirely out in the cold. Mostly Nathalia, tbh, Jenni's at least trying.

Hair consult time: my kids LOVE those colour sprays, they pout when they don't get to get a spray of hair dye with their cuts. So.many.closeups of Sally Beauty products

Cornelius is worried about how red their collection is, even for Team Red, but Dexter and Erin LOVE it. It's like they don't remember two weeks ago with those horrible shit-brown dresses they almost went home on!

Team Neutral is BOOOORRRRRINNNG, they need something.

TimTique Time! Team Blue is first, Roberi confuses Tim but Rik and Roberi's work is underwhelming. Can they be more designed? Basically in Team Blue, Laurence is the only one looking good.

Team Red: LOT of red. Cornelius explains how concerned he was about the amount of red in the collection, but Tim calls it a fantastic jacket, yay!

When did I jump onto Cornelius's side? What?

Tim has chills! He thinks their collection is smashing! Group hug!

And then he uses his words: boring, blah and basic. Neutral doesn't have to be milk. Nathalia and Mah-Jing finally make it work.

Rik and Roberi have my favourite conversation of the season thus far:

Rik: maybe if you cut it more sexy?

Rik: but you're FROM sexy *doe eyes*

Rik's worried that Roberi's stubborness will sink the challenge, but I'm happy Roberi feels that strongly that the design not be all about T&A. Testify, sister! That's lazy designing in my book too.

Not lazy right now: Cornelius, who gave up his skirt to Erin and now is making a pleated skirt to replace it while Erin and Dexter hang out

Jenni's doing MOAR applique like Erin, but the whole team is working together and that's important. Cornelius isn't being shy about how much he's pissed that he's working more than the other designers.

Model fitting time! I think Cornelius has given up, he's using Monkey House analogies and he's rolling with the tide.

Hair and Makeup time! I like how they're using the Halloween colour sprays, it looks hella cool!

Voting time! Tim tells people to "go with their viscera" and I love Tim Gunn. So hard. I really like Team Blue's the best, it looks COOL.

The designtestants listen to the feedback. Dexter is spooked by how seriously these voters are taking it. Team Neutral cleans UP but Mah-Jing is worried that even if the public liked it, that's only 20% of the vote and the judges still have to like it.

Runway Day! The public did indeed pick Team Neutral and I just don't get it. Ugly, boring, etc, lather, rinse repeat. But it is almost fall, so maybe the colour palette helped them. They get $500 each of Sally Beauty products.

Team Red is up first: 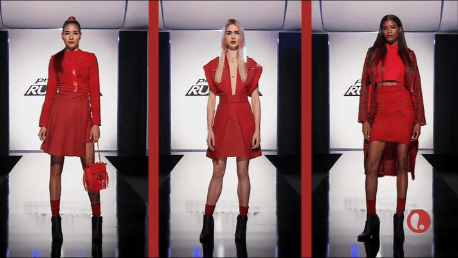 That is a LOT of red 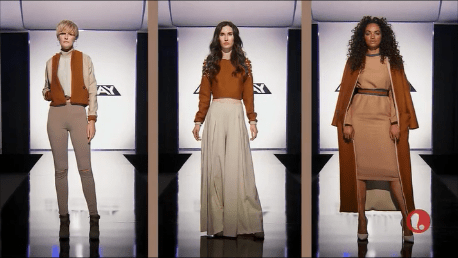 Well. They look better walking! They're actually quite pretty 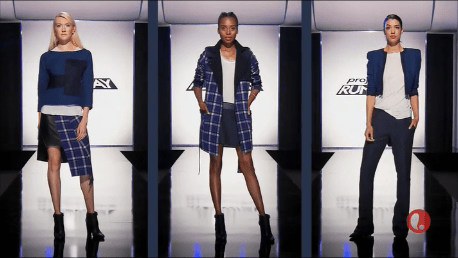 I still love Team Blue the most and Team Red the least. LOVE Roberi's on the far left

Critique time! Team Blue was the judges' favourite, Team Neutral was the public's fave and that leaves Team Red on the chopping block. I have no idea how I am calling this so accurately, I have no taste! They must be telegraphing their moves.

Team Neutral is very worried for Cornelius and they should be; Team Besties will let him take the fall in a heartbeat.

Kelly Osbourne doesn't get a punk vibe, perhaps black lipstick? Er, this is a DESIGN challenge, not a styling challenge, Kelly, shush

They get read for all the red, which is what Cornelius said! Erin and Dexter own that, too, they wanted MOAR red and he wanted to tone it down. This season's contestants are acting with integrity and I DIG that. Their looks did not transport Zac.

Now the bus-throwing: who should go home. Dexter: Cornelius. Cornelius: Dexter. Erin: Cornelius, she likes Dexter better. Cornelius gets heated, but still Erin and Dexter don't realise that he is fighting to not go home. They don't want to say anything gauche, just send Corny home, mmkay?

Now for the winning team! Team Blue; the judges love it just as it is and wouldn't change a thing. That never happens, but I couldn't agree more. Every piece is gorgeous and I would have a hard time choosing which one I liked best. Good luck, judges!

Now: who do the designers think should win, which is a way more fun question to ask rather than who they think should go home *cough RuPaul All Stars cough*. Rik thinks he should win for his awesome jacket, Laurence prefers to pick NOT herself and goes with Roberi, who picks Rik because nobody's picked him. I would seriously go with Roberi's personally.

Cornelius says he won't talk because it's just negative shite, and then it's ON with Dexter. Mah-Jing squeezes in between them, but that just seems to escalate things.

Model Groping time! They LOVE Erin's coat, but Tim calls her and Dexter out for being Mean Girls. What's interesting to me is that Zac speaks about Laurence as a designer but none of them think her look is the strongest.

I hope Roberi wins and I think Dexter will go home, which makes me so sad. I love Dexter, but is my love of his personality clouding my judgement re: his talent level?

The winner of this week is: Roberi! Yay!! So well deserved, you stick to your non-sexy guns!

And going home is: Cornelius. Damn. That's not okay. He did all the work and sacrificed his design for the team that didn't waste a second feeling bad about him.He hugs everyone but Erin and Dexter. Tim comes in to say goodbye, but NO! He isn't! He's using his save on Cornelius! I just got chills from head to toe, y'all, for real. I'm so happy for him!! The collections were all great, his was just less great and he gets to stay! Yay! Everybody say love!

Until next time you guys!