Hi everyone and welcome back to the sixteenth season of Project Runway! 16!!! Can you believe it? Heidi Klum and Tim Gunn look fresh as daisies and designers keep coming up with new ideas under the sun, so I guess we'll ride this pony until it quits! Rolling S16:E01 One Size Does Not Fit All after the break.

Before we get any further, do y'all realise Harvey Weinstein produced this show? I don't know how I feel about that. Let's talk it over as we go along.

We open with designtestant Kenya Freeman who is motivated and prepared!

And Aaron Myers....I get that you're into gender bending and hey: do you, I just think there isn't much sadder in this world than faded pink plastic blonde hair. Get thee some strawberry koolaid and punch that shite up! 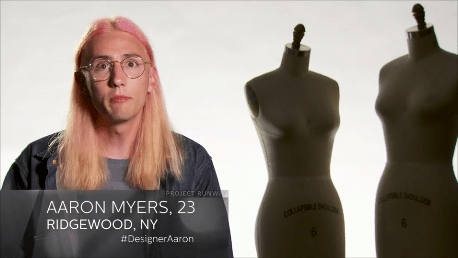 Ayana Ife is all covered but that isn't boring 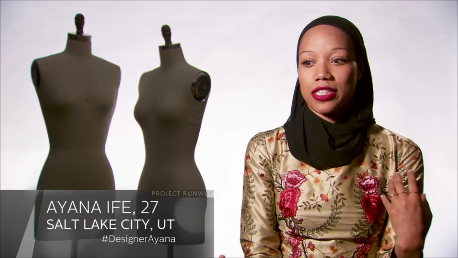 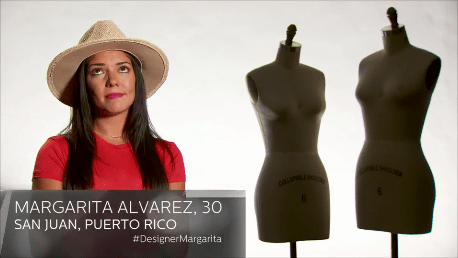 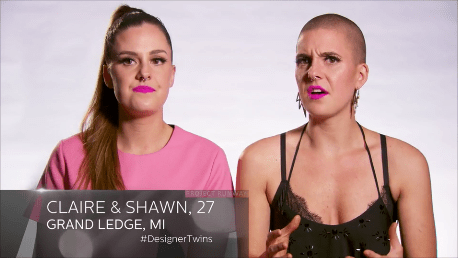 Are the first to show up at the opening party, where a Grey Goose espresso martini promo is waiting. Deyonte Weather is next to arrive 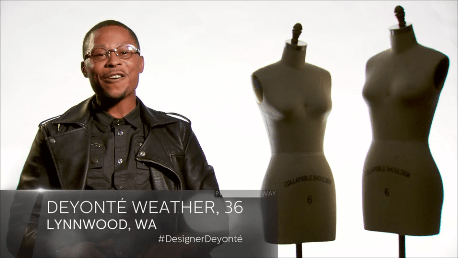 His wife is just about to have a baby, mazel tov Deyonte!

The twins set upon him, name dropping immediately. They also do glam leisure, in fact their first client was Katy Perry! I don't know if that's a brag or humblebrag, you know what I mean?

Also, the twins are tack tack TACKY plus basic and lemme do some soul searching for a bit because that was VISCERAL.

Okay, they interned with Betsey Johnson so they can't be all evil.

Margarita shows up, she likes FANCY! Samatha Rei and Kentoro are next 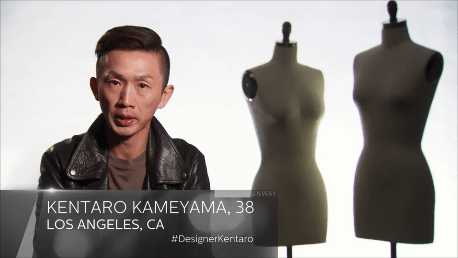 Kentoro was a classical pianist in Japan, but it's a classic case of "an arm issue in the 90s." If I've heard that tale one time, I've heard it a dozen.

Amy Bond is next, she looks like she pulls around the rear of Home Depot and in reality is a design teacher, she thinks this is gonna be eaaaasy peaaaassy. She looks exactly like Tintin! 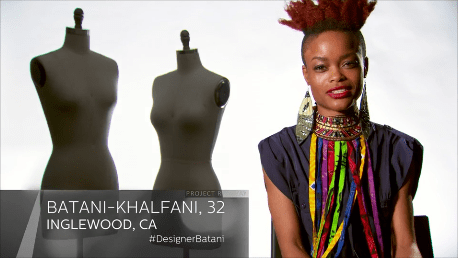 Everyone else shows up, Brandon standing out because he's so...usual looking. He's never done Women's Wear. 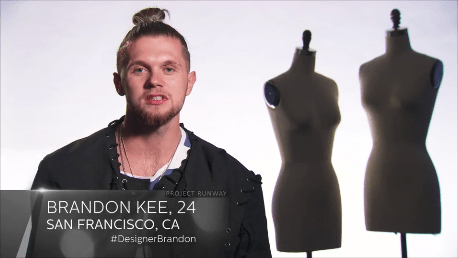 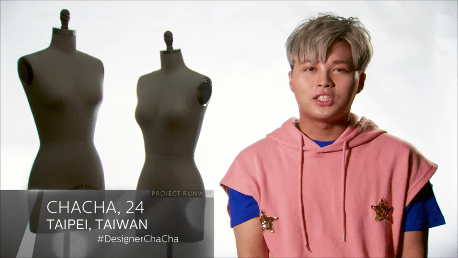 But that means I probably won't like their clothing. That's just how it goes on Project Runway for me.

We must have met everyone, because a giant bus is pulling into the party, discharging Heidi and Tim, who look AMAZING 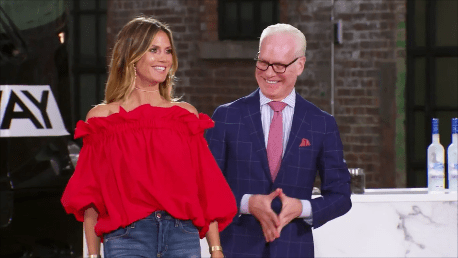 Whoops, we meet one more designer after that, Kudzanai Karidza 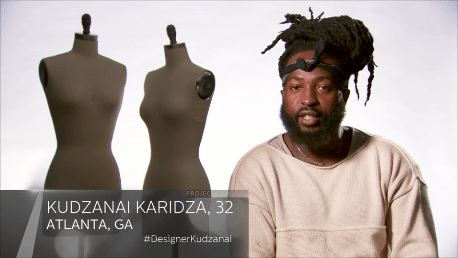 It's Project Runway's Sweet Sixteen! I will buy it booze and try to keep them from throwing up or going into dark corners with people.

One more Grey Goose promo and we're on to the challenge, which is a Red Carpet look to showcase who they are! One day, $300 at Mood and they should expect the unexpected. You'll see what that means when you see Zac Posen.

Oh sure, first they mean the models! The ladies pour out of the bus and it looks par for the course at first...and then we have bums! And boobs! And non-hourglass shapes! And plus! WOO HOO!! 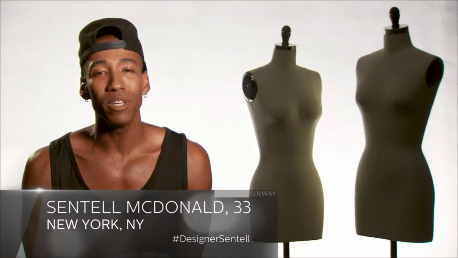 While Brandon gets even whiter - HE MIGHT HAVE TO WORK WITH A PLUS SIZE MODEL.

Samantha is 'CITED! This is her wheelhouse! 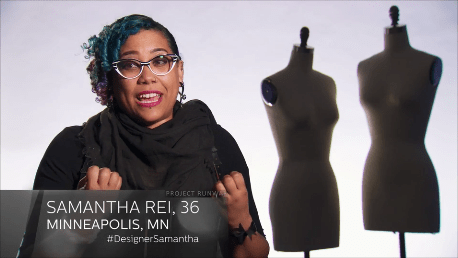 And of course Brandon does get a one of the bigger models, a beautiful tall lady that is freaking him the eff oot.

Am I really recapping a Harvey Weinstein show? Am I? Is that betraying the cause? Well. He's gone and not coming back any time soon, so while I'm sure he's making money on this somehow, he's no longer connected. These boycotts hurt everyone else, but how else can we show support for the victims and hurt him financially? I want Adam Venit's head on a platter for Terry Crews but he seems untouchable, what can we do about that? WHERE WAS I??

Chacha has a plan!

Ayana is all about the modesty, her model will be completely covered. I do prefer it when the designers don't just use their model's bodies to win, so I'm interested to see what she comes up with because she's insisted her clothes won't be boring. Sure!

The twins are having separation anxiety, having to work two feet away from each other - they are so ON all the time! Nobody talks like that!

Brandon is struggling emotionally, but he invokes the power of his family and girlfriend to pull through. I quite like his menswear, it's very of the moment and swaggy (that's a word, right? Biebs? Help me out!), so let's see if his eye will pull him through. He should stop complaining about the size of his model, though, we come in all sizes, dude. 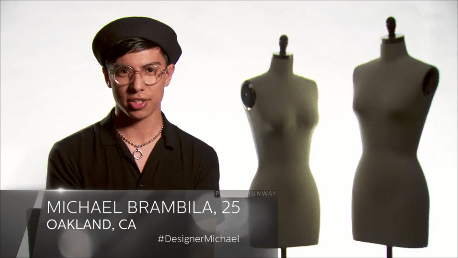 MOOD TIME!! Hi Swatch! Deyonte chooses a large print and you know that can go either way, D!

Tim leads everyone to the workroom; everyone but Brandon is ecstatic. Quick promos for the JC Penney Accessories Wall and Brother sewing machines and the designtestants are away on their looks.

Everyone cuts and sews and pins, a card reader told Sentell to be a designer after his dance career pooped out (see arm issue in the 90s), Aaron is working on feminine menswear and Samantha is adding Business Cleavage. I love that! Chacha is having a little bit of trouble with the...designing and sewing part. Good thing they're adorable, man.

Chacha calls their form "too fat" and the multiverse explodes as everyone comes up with every euphemism they can think of for fat that isn't fat. Fat can be a very empowering word, yo. Ayana sums it up best by saying that it's not the words that matters, it's the "treating your model like a problem-size" model.

Kenya is the first to get an introduction and a Timtique; she's doing an Oscar-worthy ice cream dress. Aaron is next with his flip-flopping tuxedo. Margarita wants to spice up her look.

Chacha is not explaining this look well, so far it's Ariana Grande and Miley Cyrus and Tim can't come up with one thing to say. We get a metric tonne of chin holding and that's IT.

Yay, so it's not just me, Claire and Shawn are irritating other people as well!

Deyonte's dress is lovely and fits his model like a glove, but essentially his design is a print. Just one giant flowered print.

Time is up for tonight and the designers retire to the totally unfancy Box House, where they take turns shouting about being the Final Four. It doesn't look like confidence when it reeks of desperation, designers.

Chacha had a come-to-Jeebus with themselves and now they're adding pink ruffles to everything and I'm sad that I won't get to know Chacha better.

Brandon continues to struggle, but it's hair and makeup time! Oh. Not Mary Kay and Sally Beauty, it's AVON Makeup and some random hair product company. Boooooooo

I AM WORRIED FOR DEYONTE!

After all of his struggling, Brandon nails the look for his model; 10/10 would wear. I guess it's more important to have the eye for what's shaking as opposed to experience with different (as in female) bodies.

It's time for the first runway, woo hoo!! Nina "Bedhead" Garcia is looking fab but Zac Posen got a perm! Y ZAC? Heidi look great but wow they have a lot of promos for this season, yes? Leave me some dignity, Hides. Our guest judge this week is Olivia Munn who I want to like much more than I actually do. Let's see some clothing! 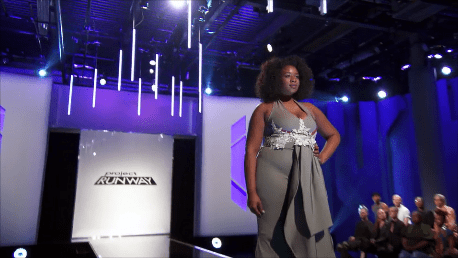 Batani, Deyonte, Chacha, Kenya, Brandon and Shawn are all asked to step forward and everyone else is dismissed to the Safe/Boring room offstage.

I AM SO WORRIED FOR DEYONTE!!

Kenya: they looooove her dress and what she was able to do in one day: there's BONING! The fabric choice wasn't the absolute best, but they are impressed and can't wait to see what else she can do. TOP

Shawn: the shorts are poorly hemmed, Zac calls the look "clubkid" and "hookery" and Nina reminds Shawn that you cannot be best-dressed without any CLOTHES ON. "C-list celebrity" with a not great stylist. Not only is it a BOTTOM, it's the setting for Zac's first face mug of the year:

Chacha: Heidi calls it a scrunchy, which is so perfect I can't believe I didn't think of it. He's in the "My Little Pony Zone", as if a clown and a unicorn had a baby. Mostly I hate it because it's cut so poorly and looks stupid, but I didn't go to school to learn them fancy words like the judges. BOTTOM

Brandon: They love it, yay! I almost cried with him

Batani: Nina drags her for not embracing her model's shape, but rather trying to camouflage the woman's curves. Lots of times curvy just means people are afraid to say fat (see above) but in this case it's truth in advertising, Batani's model is all swerves. Back in the workroom, Batani said her look was good for her model because it would "hold her in" with stretchy grey fabric, which is the complete opposite of how Batani dresses herself, so. There is also this confusing line of appliques leading down the woman's bum, like a bizzaro train. BOTTOM.

It's time to grope some models, woo hoo! Heidi gets right in there with Batani's model, even though Batani swore she wasn't hiding anything with that line of bum applique, Heidi snatches it off to reveal a large hole. Gurl. You can't hide things from Heidi, you gotta know she's gonna check. It's like when chefs bring up a plate of raw scallops to Gordon Ramsay, you think he's gonna plate those, this one time?

Kenya is second, then Brandon and "has potential" Shawn (I did like the top) leave the runway to go tend to a crying Claire in the backroom. She was very worried about her sister.

Batani and Chacha face the music on the runway; it is Batani who is safe and Chacha who we will know no more. They just have no clue, no clue at all, but they're adorable! I will miss you, Chacha! Pack up your squeezy donut and go.

Next time a leprechaun goes dumpster diving, yay! Until then, cheers!