Good morning all y'all! I didn't want to wait until the weekend for Top Chef so here we are! Rolling S15:E02 Smile and Say Mise after the break!

We're back at the Top Chef celebrating Tyler Anderson's win but he's already up my nose so he gets one tiny fist bump only from me. Almost gone girl Carrie Baird is self-flagellating for her close call with FAR more profanity than I have come to expect from her or other members of the Mormon church.

She decides to take the same path as Tyler, creating new dishes organically and not relying on stuff she knows she can make in time. They vow together to "make it worth it" but Tyler seems dismissive.

Chefs Bruce Kalam, Joseph Flam and Tyler are all rooming together in The Bear's Den, which is what they've dubbed their no-doubt stinky, stinky room.

We're back in the kitchen again and it's time for the Quickfire Mise en Place challenge! Blue Apron is the sponsor so they throw "artisinal" around a bunch and we meet our guest judge Troy Guard. 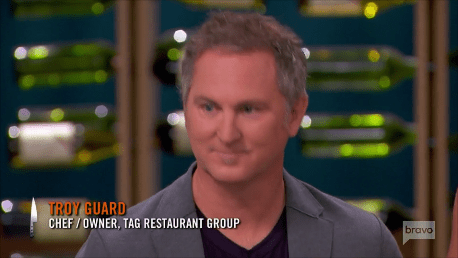 Brother Luck is all about the Mise en Place, he even has the tattoo. For him it's not about prepping onions until your fingers ache, it's about making sure you have your shit in place before you start anything. I guess Mise en Place looks better on a tattoo than Covey's Put First Things First. 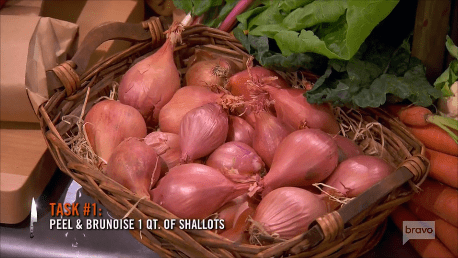 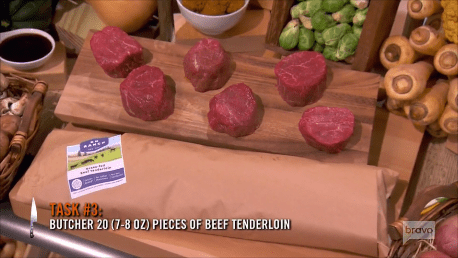 Then the winning team cook against each other using the ingredients they just prepped!

On the Green Team, Tanya Holland is feeling the pressure of having armies of sous chefs do her mises for years and years, she hasn't peeled a mushroom since she left France in 19MummbleMumble!

The Blue Team splits everything up down the middle, I dunno man. Adrienne tells us how the tasks will be divided, but I don't really remember so Imma skip.

Laura Cole from Alaska is brunoising the shallots for the Green Team, she is nervous AF, which makes her slower than normal. Adrienne cuts a wide swath for Blue, chopping like a mofo. She gets first blood for her team.

The Blue Team is far too interested in trying to make this Bear thing work to concentrate on food, I'm just going to say. I watched Tom of Finland last weekend and ya'll are bringing up completely the wrong notions for me.

...why are they peeling mushrooms again?

Blues keep the lead until the final round, where Tu David Phan's inconsistent meat trimming pushes a seemingly victorious Green Team back into the weeds. Bruce used a scale and takes the W for the Blues.

Just in case you didn't know Tu was mad, he throws a bunch of pans in the back and makes lots of noise so we know he's disappointed.

Cooking time! Claudette Zepeda-Wilkins is cooking Mexican food instead of Rogelio Garcia's mushrooms in cream sauce (side eyeing like Bruce and the chicken wings last week!), I love how Rogelio is all "????I have no idea how to make a cream sauce in 5 minutes"

Food! Steak Pron for everyone! 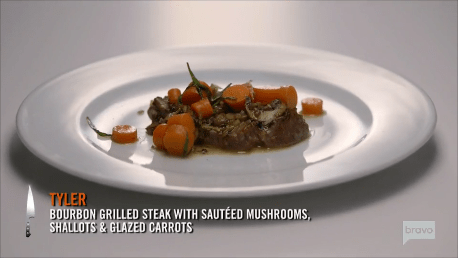 In the bottom is Rogelio with his broken sauce and Tyler, who gets dragged for his dish being mostly about carrots.

On top are Brother (that sounds so weird to say, as though I'm in Little House on The Prairie) and Joseph, it's the latter who walks away with $5000 and his recipe in the Blue Apron cookbook.

Moving on to the Elimination Challenge; Alex Seidel and his Mystery Product will be joining us.

We're going Farm to Table, so Tyler will have lots to roll his eyes at, off we go to the farm! Tyler would like Greek God Alex to visit the Bear's Den, peez!

The Mystery Product has Adrienne shook

Laura drops some awesome news on the way, she's a Paris-trained pasty chef! Everyone else chitchats and we start to delve into Claudette's astrological chart, which seems...unnecessary...

Lookit how pretty the two chefs are at the farm! Tyler is all agog 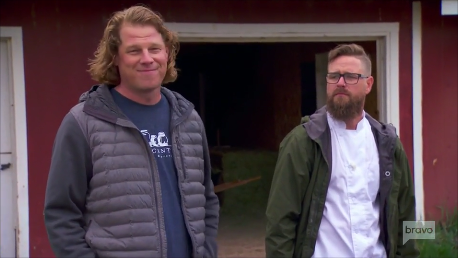 The Mystery Product is...cheese! And not just any cheese, sheep's milk cheese so it's EXTRY artisinal! They getta taste a bunch and now I have to go source some because it's been far too long since I had really expensive cheese.

The challenge is a four course progressive dinner with one cheese per course and everyone seems to know what they want to do. Adrienne is leading with a raw fish with cheese, which makes me hope she knows as much about fish and cheese pairings as she says she does.

Damnit, Paris-trained pastry chef Laura gets lost in the mix, overshadowed by Joe Sasto III's overbearing management style. Speak up, girl! Don't let those rammy men push you around! YOU GOT TRAINING! She's feeling isolated and left out.

Sasto III is micromanaging his whole team AND Tyler from the other team, back off bro! We getta picture of Tyler dressed up as Julia Child as a young child, the bug bit him early! We getta see Chris Scott's past photos (stone cold fox, yo) too as he tells us he was once an overbearing narcissistic egomaniac like Sasto.

The teams break for supper and Laura challenges whether or not their menu is actually progressive and Chris pushes Sasto back in his place. We'll see how that goes, because Sasto believes he is ready to lead.

Rogelio is still reeling from the surrealness of being on Top Chef, immigrants with language barriers have to work twice as hard and yet here he is. High five Rogelio!

Fatimi Ali is making the first course for her team, they have a plan!

Tom and Alex come in to see how everyone is doing just as Sasto realises his lamb looks like shite next to Rogelio's. Tom passes on some knot-tying tips to Tu while Sasto looks on and cringes. Get your dick off the table, Sasto, this isn't all about YOU.

Laura prides herself on her lack of waste, she's even using cheese rinds in her cracker dough (using a pasta press?) BUT THERE WAS SO MUCH CHEESE, LAURA!!

However, she has had a bear in her refrigerator (not a euphemism) so she's probably our go-to for reducing food waste.

Tom and Alex RUN when they hear Rogelio's plan for his lamb and then that's it: we're down to one hour left all of a sudden.

Tu burns something and Sasto loses his mind, but only in his mind, so it was okay.

Adrienne is working overtime trying to teach Claudette how to cold smoke their trout, I don't know why you would agree to do something if you don't know how to do it.

The judges are heyah! The first course:

Round Three, aka the LambDown

I keep telling you; Lamb no more!

And finally out last course, Dessert

The Feta Ice Cream is Padma's favourite dessert ever on Top Chef!

Now the yik-yakking; Adrienne and Claudette, Tyler and Rogelio are in trouble, but not as much as Sasto III and Tu, who are very lucky their teammates didn't suck as much as their lamb did. Carrie is definitely gonna win this one.

Now we're at the judging and it was a tough choice for the gang, they really, REALLY hated the lamb but have to give them the W anyway. Carrie walks away with it while Redemption Song wafts by on the wind. Awesome job, I guess the swearing helped!

Tu and Sasto came up with an idea that they think would have helped them fare better in the challenge, they should have told everyone to eat it with their hands, like some kind of grotesque lollipop. So, not change the cooking or the side dish, just...tell people to pick it up? Tom Colicchio's face says it all.

Now the Blue Team. The dessert was fine so it's Adrienne, Claudette, Rogelio and Tyler that have to 'splain themselves. Oh no, Rogelio is in trouble, I like him! I am worried about our tall Mexican drink of water!

Deliberations ensue and while I was worried about Rogelio, we actually lost our other Mexican chef as Claudette is sent to pack her knives. I am so disappoint! I was looking forward to seeing what she was gonna do; anyone who can do a mole sauce in under an hour has my attention.

Until next time, foodies, keep your knives sharpened and your fish smoked! Cheers!