This is it, the finale of Russian Doll where we finally find out what the actual Sam Hill is happening! Finally!! I am even looking forward to understand all the myriad details and clues that I missed that could have led me to this conclusion. Without further messing about, let's dive in to the season one finale of Russian Doll S1:E08 Ariadne.

We open in view of both Bathrooms Of Doom, Nadia Vulvokov (Natasha Lyonne) and Alan Zaveri (Charlie Barnett) starting this next loop as their music plays discordantly over top of each other.

Hey! The fly from Alan's bathroom ends up in Nadia's bathroom! I always thought of that fly as his familiar, seeing it on Nadia's side is very confusing for Nadia, Alan and I.

A huge crowd waits outside Nadia's bathroom at her birthday party, she's so happy to see everyone! Last episode we kept losing people and I was wrong: the person banging on the bathroom door was one of the usual folks, just all by themselves.

She ecstatically greets everyone, hai Maxine (Greta Lee)!! Maxine is not happy Nadia is leaving the giant party she is throwing for Nadia for her birthday.

Let's go get you a shirt! That will be how we differentiate her in this timeline!

Everything has returned to Alan's place too, hai engagement ring and fish! Nadia prepares to descend the Stairs of Death, greeting Mike Kershaw (Jeremy Bobb) who is busy talking to Alan's girlfriend Beatrice (Dascha Polanco!) and is still a dick.

Alan's not at his apartment waiting for Nadia, instead he's outside meeting a beautiful woman he never noticed before, hellloooooo pretty lady! Was she always there? Don't ask me, man!

Nadia can't get into Alan's building no matter how hard she tries, she ends up talking and flirting with Joe (Burt Young) while Alan goes to her party. Ohhhh, they're each having each other's interactions, I get it now!

I can't wait to see how the banging goes for Alan and Mike!

Even better, we get to see Alan meet Lizzie (Rebecca Henderson) and her girlfriend Jordana (Charisma Glasper), reassure Lizzie about raising children, and be party to a somewhat graphic discussion re: menstruation. The important takeaway is that Alan now has a red scarf.

Nadia finds her missing cat Oatmeal finally, hai kitty!! Oatmeal is hanging with homeless Horse (Brendan Sexton III), after a short talk about the nature of ownership, Nadia is off with cat in hand.

Alan pops into the deli next, thank the gods that Farran (Ritesh Rajan) still exists! He's gotta rib Alan about knowing Nadia, not biblically, Farran, c'mon! Well, once but it was casual and there was some roleplay involved, so was it really them? Was it?

The Wall Street guys from the first episodes are there looking for nitrous oxide. Alan retraces his steps the night of and checks on Oatmeal's food in the basement.

*We all held out breath as he looked down those steep stairs, didn't we?

And Nadia's there with Oatmeal! And also Mike and oh shit

They're trapped in separate timelines. Oh come ON!

Alan tries his best to make Nadia remember him, if she dies now it could be a permanent actual death. He throws out some information about Mike, who is screwing more than one of this grad students, apparently.

Neither is the fact that they haven't gotten the condoms they came in for. Mike and Nadia are out the door, Nadia screaming "raw DOG!!" as we try to contemplate anything that could be grosser right then. I'm coming up blank, you?

Nadia is having the same fun with an extremely drunk Alan, yelling at the Wall Street guys before getting kicked out of the deli by Farran so he can take care of Alan.

We're going to need names for these loops! Okay, we'll call the one with Oatmeal and drunk Alan with  Last Loop and the other one with Alan and a scarf and drunk Nadia First Loop. I'm so original! I should be a writer!

We're in First Loop with Alan chasing after drunk Nadia and about-to-raw-dog Mike, but I don't know if screaming "you're going to get hit by a car and die TONIGHT" is the right opening, Alan. Mike has to back Alan up, he's just "trying to consensually screw this young lady in peace!" which is heartily sanctioned by the young lady herself.

Alan follows the couple to Nadia's place, taking a picture of them necking to send to Beatrice with a "Call Mike NOW."

In Last Loop, Nadia follows Alan and Farran to a diner to watch him carefully knock a spoon off a table, so she does the same to get his attention. It does not break through the fog of his extreme intoxication, instead he shambles out of the diner with Nadia in hot pursuit.

In First Loop, Alan circles back to the deli to get Nadia's number from Farran but then remembers it himself. Farran calls Nadia while she's making out with Mike (we really skipped the condoms, huh?), passing on the message that she owes Alan 152k and change, that must be for the Krugerrand around her neck to do with her college fund!

I *sort of* remember that!

Nadia leaves Mike at her apartment and shambles to the deli while Mike gets 1000 angry texts from Beatrice. I don't think that's going to be working out for him after this particular loop.

Ah but Horse isn't the lovable homeless hairdresser Nadia knows and loves, rather he's found a mark and he intends to fleece him for whatever he can with the help of his street buddies. Nadia watches as Alan hands over all his money and wallet then corrals him away as Horse...puts on his head? 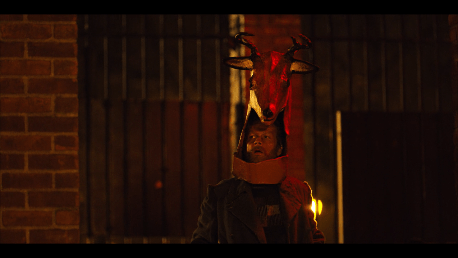 Did we see this before? Does it mean something?

In First Loop, drunken Nadia is skeptically listening to Alan explain her theory of relative morality and time. That doesn't work, so he goes with a simpler concept: let's go find Oatmeal in the park!

Alan seems pretty far away from killing himself in Last Loop, Nadia's supervising him in his apartment but he's an affable drunk, eating cake and pretty chill. Sometimes suicidal people are chill because they've made up their minds to do something, perhaps after giving away all their worldly goods.

One quick note: the cake is chocolate, wasn't it white cake before?

How can there still be questions in the last episode?! That's not fair!

Nadia tucks Alan in with the Story of the Broken Man and the Woman With the Death Wish. It involves a broken man being saved by a woman who "looked like if Andrew Dice Clay and the little girl from Brave made a baby." Awwww hahahahaha.

They just have to make it through the night and not die in both loops with their sentient partner's assistance.

Alan's struggling with a hardheaded Nadia in First Loop, even though he's got all kinds of inside information like the problem with her mother dying on this very day.

She's about to give up on him entirely but as Mike sets upon them, shouting, Alan saves her from the cab that killed her lo the very beginning of this series. She can't handle it, and neither could Alan in Last Loop, he's up on the roof as every police car in New York heads in their direction.

He gets there AFTER her! He hasn't jumped and there is still a chance. He asks her to promise that he'll be happy if he doesn't jump and she can't do that but she can promise he won't be alone.

Nadia turns away from Mike and follows Alan too.

They're okay in both loops. Both loops are the same! They pass each other!

They're safe because they have each other, they have help and care. And we're oot for the last time this season.

So. Let's review! The mirrors disappearing, that was from Nadia's past, her mother destroying all she could find one day. The ring disappearing was Alan giving it to Horse in one timeline. What happened to the poor fish?? C'mon! I don't have one clue as to what that parade means. Not one.

What an interesting and layered show. I'm still a little struck by it, I think I'll sleep on it and finish this off tomorrow because I need to think about everything we saw. Turns out a bad night of sleep and re-reading recaps did not help, so I'll leave it here until the next season where perhaps more questions will be answered.

Thanks again to J, who recommended this awesome show for recapping. Cheers!