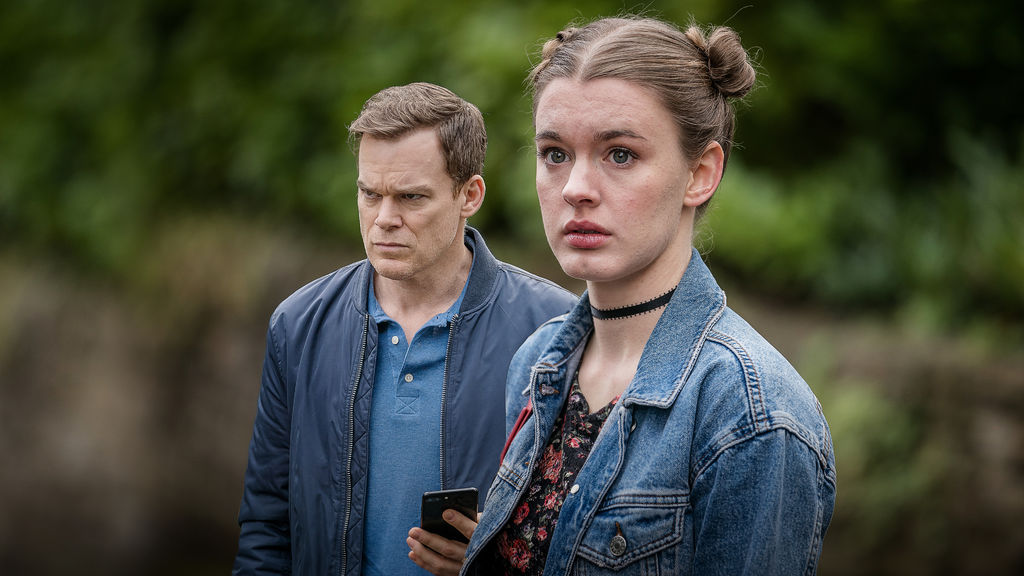 Hi everyone and welcome back to Safe where things are moving suuuuper fast, even though we know that everything we know is wrong, right? It's Harlan Coben! Rolling the third episode after the break!

So last time we ended with some serious questions about someone we're never ever going to meet, Tom Delaney's (Michael C. Hall) wife Rachel (Katy Carmichael) whose funeral was exactly a year before our show started.

That's not where we open, COURSE, instead it's the night Tom and Rachel's 16 year old daughter Jenny (Amy James-Kelly) disappeared after leaving a party where her boyfriend Chris Cahal (Freddie Thorp) disappeared then died and was subsequently found in the swimming pool. His body was hidden by the Marshalls, the people who owned the pool, in a convoluted plot insisting that fighting drug-dealing rumours is more important than REPORTING A DEAD BODY. The daughter Sia (Amy-Leigh Hickman) even knocked out another guy, this family is on a spree!

Sorry, where were we? Ah yes, the night of the party was when Jenny disappeared and we're trying to unravel where she went after the party. She sent a cryptic text to Chris saying "Tonight - Heaven" which Tom figured meant a bar downtown, but almost-creepy Bobby (Milo Twomey) swore she'd never get in. Later we saw him putting flowers on the grave of Tom's dead wife, so I immediately assumed they were having an affair and that Jenny was actually his daughter.

It's because I just recapped the excellent Come Home.

Right then, are we all caught up? Let's roll after the excellent credit song! Something something glitter and gold something walk through valley of something etc etc.

We're still at the train station with Tom, who found Chris's Vespa nearby and in possession of two train tickets, he's just gonna wait there. His best friend and former foxhole buddy Peter (Marc Warren) is helping but also being investigated by the police, there's a story we haven't heard yet.

Speaking of the police! They're investigating Chris's mum Zoe Cahal (Audrey Fleurot) for an alleged sexual relationship with a student, someone stashed naked photos of her with some unfortunate letters so she's at home texting her (unknowingly) dead son.

By police I mean Sophie Mason (Amanda Abbington), she's dating Tom, or well, "dating" while nobody is watching. She's got a teenage son of her own, Henry (Louis Greatorex) who is driving her mad and also who hid something in his closet from the party.

New copper Emma Castle (Hannah Arterton) is helping with the investigation at the school, but she's a recent transplant from the big city thanks to a devastating breakup. We get to see the photos of happier times, when she understood about less being more where rouge is concerned. She's been taking photos of Peter too, but we don't know why yet.

Now this is an odd lapse. Remember when I said that Henry hid something in his closet? He asks his police officer mum to grab him a shirt and of course she finds the one from the party covered in blood. She's off to ask some questions. She also is frustrated because her ex-husband isn't in the caravan in her driveway.

Sophie doesn't think the accusations against Zoe are true, so she asks Zoe to think about anyone who could have something against her and we all stare at her always-angry husband Neil (Joplin Sibtain) that she is divorcing.

Jojo Marshall (Tony Lindsay) has just about enough of the dead guy melting on his floor and the live guy tied up in his shower, if his daughter hadn't been selling drugs, none of this would have happened! He's off to work and I worry bunches about the sort of live guy in the shower upstairs.

Tom gets a call asking for $5,000 in exchange for Jenny's location, Peter is skeptical but Tom is energized, he could almost have her back!

Henry's having dialysis today, Tom is his surgeon and rather busy at the moment, taking money out of the bank and plotting with Peter.

The guy in the shower who saw Chris melting on the floor is Martin (Joe Standerline) and I afear he is not long for this world. Sia isn't about to go to jail, so she scares the shite out of Martin over..watching her swim naked? That's a...pretty open pool area. Anyway, I think it works.

Ahhhh the guy who picks up the ransom from Peter is the bouncer from Heaven! Peter follows in a super obvious way until Sean (Steven Hillman) turns around and jumps him. Tom has to join the rumpus and in the excitement Sean wanders into the street where he's hit by an uninsured motorcyclist.

Sean's wounded enough for Tom to "convince" him to explain how he knew what Jenny was wearing (can it only have been last night? No, gotta be at least two) the night of the party, Jenny DID come to Heaven and was looking for Bobby. Ooooh. Tom's gotta run, his other daughter has gone missing from school.

Jojo gets home from a work emergency to find Martin gone and his wife Lauren (Laila Rousass) angry. He can't believe she let their live captive go!

Tom heads to Chelton Community Centre where he heard Carrie (Isabelle Allen) has gone, much awkward conversation with friends and colleagues of his dead wife ensue. Isn't he supposed to be in surgery right now?

Tom ends up in his wife's office, where there are picture after picture of her with their kids but also working on projects, arms around all manner of people. Tom's blown away, shocked then angry at the separateness of his wife and her work.

He yells at the assistant but I have to note that he brings up the part about his wife doing things he doesn't know with people he doesn't know, it's like she wasn't HIS. That's marriage, innit? MINE.

Zoe drops off a list of people she's had issues with over the years, Emma practically sneers but brings it right to Sophie when she reads the fourth name on the list. Sophie is interested enough to leave her son in the hospital by himself. He's joined by a friendly teenaged girl, so maybe it's all right.

Tom finds Carrie at the art gallery, awww they bond. And they needed that. She's going to help him look for Jenny.

Oooh it was the Marshalls who were angry with Zoe, for giving Sia a bad grade. Jojo talks as fast as he can to keep the police not noticing the dead body whose feet are in the hallway.

The Cahals aren't exactly acting normal either, Neil not the least concerned that his son has been missing for ages. It's almost as though he knows where Chris is...

Sophie goes over to Tom's house to get the news about Henry's dialysis, he needs a kidney donor. She'd also like Round Two with Tom, ifyouknowwhatImeanandIthinkyoudo but memories of his wife keep intruding.

Tom does some more research online, he's calls Peter with the news. Bobby used to be Rachel's boyfriend. They meet up at Bobby's house, Tom's having a problem understanding how little he knows about his family.

Bobby shows Tom the CCTV footage of that night, he wasn't there but the video shocked him too. Jenny looks exactly like her mum did at that age, Bobby never got over Rachel. Jenny left him a note that said "I know about Jasmine. I'll be back tomorrow night."

Who is Jasmine? Nobody knows!

Sophie's ex-husband Josh Mason (Emmett J Scanlan) arrives back at his caravan, late at night and remembering seeing Jenny on the subway platform but also angry with him. Hm. Is that maybe who Rachel was having an affair with?

For the record: we don't know that Rachel was having an affair at all, just that she felt bad about something.

Zoe keeps calling and texting Chris with no luck, since the Marshalls are dumping his body in the lake, Jojo falling in himself.

Huh. Jasmine Hall is a secure psychiatric facility, what does that mean? Chris's body bobs to the surface and with that, we're out.

Well. Our extremely involved plot continues! Michael C. Hall did a great job in the scene where he discovers the shrine made to his wife's memory, approximately one hundred emotions crossed his face in the span of a second, it was powerful without being overdone. We're peeling back a layer at a time, gently, gently. Until the next time!