Hi everyone, welcome back to Top Chef Colorado where our brown sugar biscuits are crackling and our pizza crust is both cauliflower AND edible. How are you liking this season so far? I am DIGGING it, although we lost a few people early that I would have liked to see more of. We're rolling S15:E05 This Is Not Glamping after the break!

We're at the house after the elimination where we lost chef Tyler Anderson; roomies Joseph Flamm and Bruce Kalman are sweating their time on the bottom. Bruce is getting psyched out by these Youngs and their special processes, he's just gotta focus on what he knows best. Gnocchi. Okay, more than gnocchi.

Brother Luck's feeling energized by Top Chef's challenges, he cooked for himself the last challenge.

The Bears have had enough of their time on the bottom, Joseph says "bears don't bottom" then there's a pause and we all laugh because that's not true!

We're off to the Top Chef kitchen where...Kwame Brown, Claudette Zepeda-Wilkins and Lee Anne Wong are already cooking? Everyone who left is back too WHAT'S GOING ON?? Ohhhhh, judge Tom Colicchio explains: this is Last Chance Kitchen gone primetime and and whoever wins in 16 minutes is coming back into the competition.

I would also be good with Claudette, I wanna see her food!

Sorry, Lee Anne, nothing personal, I just don't know you like that. Chef Chris Scott says you're a legend, so respect!

Jennifer Carroll from Top Chef season 6 is back too, warning everyone to be very afraid of whoever wins Last Chance Kitchen, the last two seasons were won by somebody that came back! I need to roll tape on that but for now I will be herking because they are cooking with organs and I am a philistine.

Fatima Ali is scurred coz Lee Anne is gestating

Chris and Kwame are friends, that's kinda cool! I really like Kwame back in season 3, I was rooting for him for sure. He put something brown on a plate and KILT it, can't remember but I recapped so I will check it oot later. 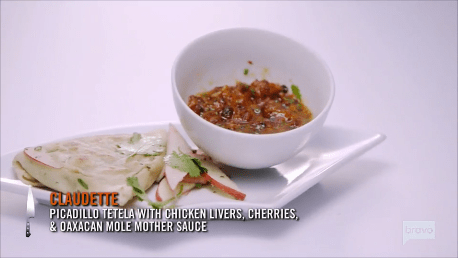 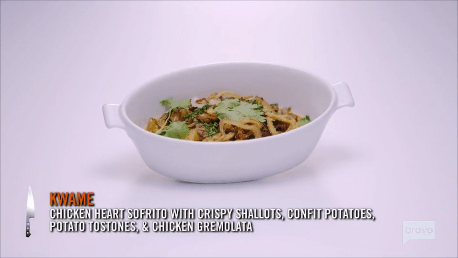 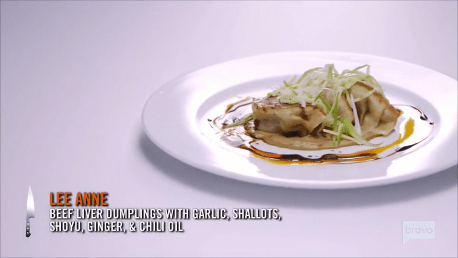 Padma Lakshmi is there to help Tom Colicchio judge who comes back in....but she doesn't taste anything, just bring the jacket.

Damnit. Kwame is cut first. Then....BOTH women will be back in, what?

Chef Carrie Baird says it best with her "surprise! Always...surprises" *staring at lap*

Padma only brought one jacket, so sure, Tom, make her look even more like an accessory, first she doesn't get to EAT anything and now she's not in the loop, okay okay he said it was on the fly. Lee Anne gets that jacket and introduces herself to everyone, she's back on the show! Dat SKIN! 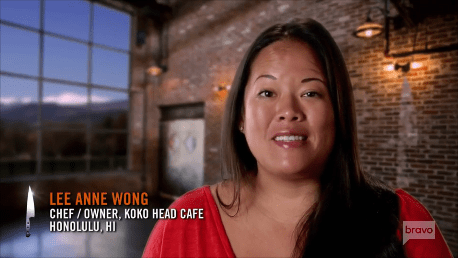 We're in the Elimination Challenge already with our two (sorta) new competitors, guess who's going camping??!! No, GUESS??!! Tanya Holland is not 'cited.

The chefs have to drag all their food with them, no extras on site and there's exposure to the elements and did we mention this is winter?

Lee Anne is not just pregnant, she's expecting her first and she's only three months in so you know she's bone tired. She's legit glowing but those first few months of the first kid are sooooooooooo sleepy. You have to grow all the infrastructure to support another life.

Oh wow, Carrie is gonna make a cake in a Dutch Oven like her dad. Bruce is going with a wild boar pasta because sure.

The chefs destroy the food table and head on out, Tu David Phu is gonna smoke a rabbit over rosemary and Chris will make a buffalo chili. I also make buffalo chili! So I will be watching closely for tips.

Ahhhhhh Tu, I've been spelling your name wrong this whole time, sorry! PHU! And Fatima, but that was the screencap!!

The chefs get $100 and 20 minutes in a camping supply store; how on earth did Carrie think she was going to get a Dutch Oven for $100?? She does not.

Claudette and Joe Sasto III pool their money to buy something, I don't know what it was but I admire the sportsmanship and hopefully not naivete.

Fatima does not want any part of this "camping". Not one part. 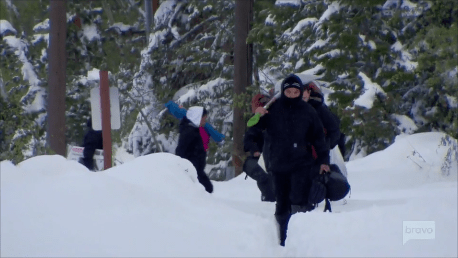 It's 38.5 degrees Fahrenheit, I will look up Celsius. 3 degrees, well, you wouldn't want to do it for long, but you'll probably live!

Chris has never worked with buffalo before so I have one tip that is not going to help him at all several months ago: it's extremely lean and will dry out fast. You're welcome!

Tom shows up to count fingers and toes, he's got Naomi Pomeroy with him so she must be guest judging this week.

Oh dang, Tu is making rabbit three ways, that's tricky and a lot of work. I really want to see him take a challenge, his food is so beautiful.

Tom and Naomi brought s'mores, woooo! They take off and the chefs sit around the campfire, Bruce strumming away and Chris singing, that was awesome! Let's get some of those lyrics:

"And all the ladies gonna love..."

Hahaha that was fab!

The next morning the chefs are up and at 'em early, this is a big challenge to keep heat maintained in the snow. Wow, Carrie made the Colorado snow-glamping equivalent of a clambake for her cakes, she deserves to win just for that oven!

Oh and then she burned her cakes, I hope she pulls that together. Chris is worried that his bowl of chili is just that: a bowl of chili. He's working it through.

Everyone struggles over their heat sources, I see so many Dutch Ovens that I'm confused. Why didn't Carrie get one? Did she not move fast enough?

And the last group

The top three are: Bruce, Lee Anne and Carrie! Woot! Carrie gets all the props for her cake, Lee Anne for her richness and Bruce for his resourcefulness as well.

And Bruce wins, yay! That really did look like a lovely dish, as they all did. I don't know how they shot the food differently this week, but it's WAY better.

Tanya, Chris and Tu are in the bottom, what?? Chris has to explain his dry buffalo and it's because he didn't know it was lean. See? If I could have gone back in time... Tu knows why he's there, but we all don't know about Tanya's dish. The sauce soaked into the farro so nobody ate it properly. You can see Tanya's face saying "If I get sent home after I had to camp..."

Imma say it now: I will be pissed if Chris or Tanya are sent home. Tu took a risk and I get that, but those other two were not bad.

Ah and it is Tu who is sent home for lack of garnish, but there's one more Last Chance Kitchen because WORDS DON'T MEAN ANYTHING on Top Chef. Apparently. Until next time! Happy New Year!