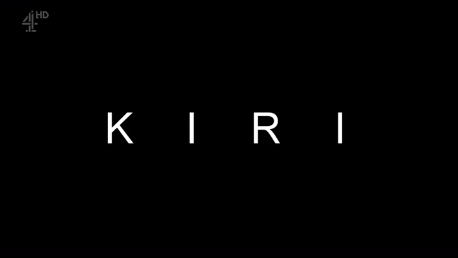 It's time for some Sarah Lancashire on my telly, woooooo! Now, in case we've just met: I have been a fan of Sarah Lancashire since I first saw her in Happy Valley. I've since watched the entirety of Last Tango in Halifax, Rose and Maloney and even more Happy Valley, so suffice to say I've been looking forward to this for quite some time. Kiri is one of the few things the notoriously fame-shy actress has recently promoted and I am here.for.it. I promise to be super duper subjective and openminded (look, I kept a straight face and everything!!), let's roll S1:E01!

We open with Miriam Grayson (Sarah Lancashire) making a cuppa (hey me too!) then heading out resolutely with her puppy Jesse, whose medical history she explains in great detail to a random person walking his dog.

In an unusual accent for her, isn't it?

On she walks until she stops at a graffiti-ed flat to drop off sausages to a young woman with a "remember to cook them this time, yeah?"

We're off to a school next, where young Patrick (Kaine Zakaz) has broken the arm of a young woman unlucky enough to have crossed his angry path. He doesn't want Miriam, he wants his birth dad or nobody and that probably had a lot more to do with the lashing out than whatever the girl said to him.

Back to the office where we meet new staff member Malcolm (Paul Go. Raymond who I just saw in Black Mirror S4:E01 USS Callister which I will recap any moment) and Julie (the amazing Claire Rushbrook from Home Fires! Woot! I'm so happy she's not getting a Bob in this show!) and Lucy (Cara Theobold) who wants advice on an obstreperous client but gets "send it up!!" from Miriam.

We meet Kiri! Kiri Akindele (Felicia Mukasa) has her hair brushed and quality time with Alice Warner (Lia Williams) who thinks her swanlike neck is simiar to Audrey Hepburn's. Miriam is surprised to see everyone home, even Jim (Steven MacIntosh).

Off Kiri and Miriam drive, Kiri's going to learn to be black? What? Plus they're being followed, which is weird.

Oh but not to learn to be black but rather to be part of her birth family; Kiri will be visiting with her grandparents Rochelle (Andi Osho) and Tobi (Lucian Msamati) until 4 and Miriam was the one who made it so.

Jesse the puppy farts a LOT.

Tobi seems lovely but Miriam is visibly nervous leaving, I wonder why she didn't go in? A car blasting music pulls up immediately after she goes.

Miriam is in court when she gets a text that Kiri is gone, they're asking for her!

Now this is odd. Miriam keeps talking about how "stupid" Kiri is and she isn't, not one little bit. She's also in the middle of a formal review and doesn't seem to understand that DI Vanessa Mercer (Wunmi Mosaku from Black Mirror S3:E02, how small this world is!) is evaluating everything she's doing.

This was the first unsupervised visit Kiri's had with her birth family, and it's happened because the adoption to Jim and Alice is about to go through. DI Mercer stumbles over that: white family adopting black child?

Miriam's not having that. Transracial adoption is legal and supported and increasingly necessary. The dangerous part of that family (Kiri's dad Nate) was essentially estranged from his family.

The flavour of the questions about Kiri's birth dad Nate (Paapa Essiedu) have just been understood by Miriam.

It's like a scary funeral back at the office; Miriam's pulled into Julie's office immediately for a review.

Side note: it is so disconcerting to hear Sarah Lancashire and Claire Rushbrook swearing full bore; f*ck this and f*ck that: is this what everyone meant about Channel 4? Was there a lot of f*cking h*lls during GBBO this year?

The media and community are on high alert looking for Kiri, but not Miriam and Kiri's adoptive brother Simon (Finn Bennett). He shares some gossip; Alice and Jim blame Miriam fully for the abduction, but her boss isn't throwing her under the bus just yet. Oh, not Julie, but some upper management dude.

Side note: Sarah Lancashire is very restful to watch. There's a stillness to her.

Si reminds Miriam of her son that passed; he apologizes for being flippant but you can tell he's bothered by something. Alice went on the radio to talk about loving Kiri and in order to make the point that adopted kids are just as loved as biological ones she said that in some ways she loved Kiri more than him.

That is not ever a good look, Alice. Don't ever do that.

The search in the background gets very excited all of a sudden, oh no oh no, they've found that little girl. Miriam and I are devastated. Watching Sarah Lancashire in that scene was a masterclass on your face explaining EVERYTHING.

Oh. Oh why would Nate kill his daughter?? She was so lovely and so young.

Miriam visits her mum Celia (Sue Johnston) who spends far less time on the murder of a little girl formerly in Miriam's care than she spends castigating her daughter for not making the most of herself. I mean really.

Her mother's a piece of work, but I don't think Miriam has anywhere else to go.

They share alcoholic bevvies and we're to it: our Miriam is in quite a lot of shite.

Ah that little girl; WHY??

The media is out in full force outside the office; Miriam's name has been leaked and they ask if she allowed the visit to be unsupervised because she was black? What?

We're in a tense meeting between Miriam, Julie and upper management James (Jonathan Slinger), the media is accusing the office of putting cultural needs first and "ticking our Lefty boxes" which I assume is a reference to Liberalism. Julie attempts to throw Miriam under the bus but as her line leader, she's also responsible.

The adoptive-family-to-be is alleging that Miriam pressured them into the meeting as a condition of the adoption and with that Miriam is placed on suspension while it's investigated.

Side note: James stretched out his hand to shake right after that and we all stared at it, unsure of whether Miriam would fight or flee and then she crumpled into herself.

She stops and cries around the corner and then marches on, to turn around to get her dog while Tobi works out? What? We know what Miriam is bracing herself for, what is Tobi gearing up for? Maybe he's just trying to deal as is Miriam.

Tobi and Rochelle have to identify Kiri's body, aw man. Jim and Alice are at the station as well, the police are trying to do what's right for both sides.

Tobi has ordered Rochelle to stay in the car (hm say DI Mercer and I) so he alone identifies poor wee Kiri as his granddaughter. Ah it's heartbreaking. DI Mercer's kindness was surprising and there was something again about Kiri's neck, what does all that mean?

He leaves and has a meltdown when he sees stacks of newspapers about his addict son and the case; Rochelle comes in to be shouted at. It was her idea that Nate see Kiri, and Tobi wants to find his son NOW.

Outside their house, Jim breaks down but Alice is stonefaced.

Drinking at her house watching the news, Miriam is called to the hospital by Lucy, who's been bashed by one of the boys in her care. She doesn't want to report, but she's quite bruised and is on enough medication to bring up the rumour going 'round the office that Miriam wants to have it off with her. Lucy has the wrong end of the stick.

Miriam leaves the hospital, STILL drinking as she drives but she can't go home because the press are there. She makes it to the house of Our Lady of the Sausages, but leaves Jesse in the car? She didn't open his door and he was in there, she's not leaving him?

Ah but Gabby (Scarlette Brookes) doesn't even like sausages! Doesn't matter, Miri's just there to puke on the floor and hide ah damnit Jesse IS still in the car!! They can hear him from in the apartment, maybe Gabby will go check??

Sarah Lancashire as Miriam handled that well, COURSE. Lucian Msamati as Tobi was brilliant, you could feel everything he did without his even seeming to move a muscle. Storywise I wish we'd known Kiri a little better or not at all, do you know what I mean? That 4 minutes of time and then gone, that's too much and too little all at once. There's an oddness to the parent's relationship that I'm sure we'll get to in the next episode, as well as the chatty / hinky son.

I know I have to get past it but the profanity is a different look; it keeps snapping my head back. It's odd, you know, Happy Valley is where you'd really expect the air to be blue, but that's BBC One for you.