Good morning, how is everyone? Are we ready for some more Top Chef Colorado? Course we are! Let's roll S15:E06 Now That's a Lot of Schnitzel after the break.

All the cheftestants are dealing with the afteraffects of their camping trip, not even the usual beer bloat or marshmallow problem, but rather lack of sleep and the altitude. Brother Luck is struggling but it's gestating Lee Anne Wong who is feeling it the most. Her first trimester was the worst (for real, growing a human being and laying down the infrastructure is EXHAUSTING for your body) and now she has a headache that won't go away.

Recently returned chef Claudette Zepeda-Wilkins (of the sumptuous elk last epi) commiserates, they push their bodies as hard as they can but pregnancy, especially first pregnancies, are no joke.

Chef Tanya Holland is dealing with a different issue; she's tahred of hanging out with chefs and their massive egos. She has a super low tolerance for bullsh*t. She calls her dad for a checkin.

Host Padma Lakshmi greets the remaining chefs at the Top Chef kitchen, our leprechaun judge is back! Hey Richard Blais! 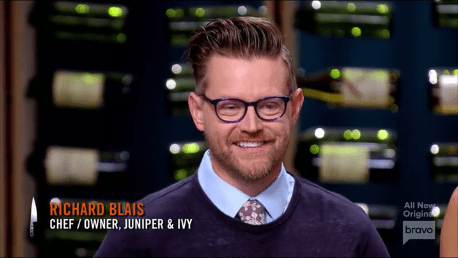 Amish soulfood Chef Chris Scott tells us that Richard is all about the sous-vide and the foam, we're gonna need some amaranth!

Or are we? Richard flips over a menu board to show us..the chef's dishes from their restaurants? Chef Joseph Flamm is confused but chef Adrienne Cheatham is worried.

The chefs have to distill their most complicated dishes (some take up to 3 days to make) into a 30 minute Quickfire Challenge. Whut? They're making Buzzfeed Tasty videos? I just figured out how to stop those on my Facebook feed! Not that I'm ever on Facebook. Okay, they aren't making videos, but rather distilling down their complicated recipes for the home cook and the winner gets to make a video.

From what I remember about the videos on Facebook you just add cheese to everything. Lots and lots of cream and shredded cheese.

Chef Fatima Ali (bone to pick with Top Chef producers who spelled her name wrong in screen caps for the first 4 episodes: I figured Fatimi was wrong but I don't like to argue with print) is EXCITED! She's ready to be a Social Media star!

You remember how she adored Padma on her travel show?

She has to make Padma a biryani in 30 minutes and she's scurred. Claudette did something terrible to an octopus and I am so sad. Cephalopods are so smart and creepy, I would not eat. Chef Adrienne is frustrated with her hush puppies, the proportions are not working for her.

Chris has switched out his rice for faster-cooking polenta for his shrimp dish, his daughters would dig his being in a Buzzfeed video but he doesn't even know what a hashtag is. JK he totally knows what one is. #ChrisKnows

Chef Joe Sasto III and Brother Luck are confident about this challenge, they're ready to take their food to the masses!

Ah man, Claudette didn't get her food on the plate.

The lower-rated dishes were Adrienne's hush puppies (I felt so bad for her), Claudette's for obvious reasons and Fatima, whom Padma is mad at for not putting enough Pakistani flavour in. There could not possibly be anything worse for Fatima to hear.

On top are Chris for his spiciness, Brother and Joe. The winner is...Chris!! I was so excited, I really like his food. His kiddos are going to be ecstatic. Rumour has it there is a cookbook in the offing, better be those brown-sugar crackle biscuits in there!

On to the Elimination Challenge, pastry chef Keegan Gerhard will be ushering them into their latest party. It's a German festival! The chefs will be making a "radler" which is like a summer shanty? Beer plus fruit soda? I have no idea but Sasto III comes from a place that would never mix the two without somebody getting a knee in the nards.

The chefs all pile into a bar to sample German beer, except Chris, who doesn't drink like me. He's asking lots of questions about flavour while explaining to us that he's been sober for three years. Alcoholism runs in his family and he was able to pull away but it makes him uncomfortable even going through the motions of drinking. I got you, Chris.

Side note: pass over if oversharing by recappers isn't your thing (HOW COULD IT NOT BE YOUR THING??), I have one year sober and while I don't think it was the biggest problem in my life, it certainly made the other ones a lot worse. It also made ignoring the worst problems easier, it was like trying to treat cancer with ice cream. Oversharing over!

The chefs actually get to eat someone else's food for once! Peter Fjosne, the executive chef of Rhein Haus, brings out a few dishes for everyone so they can get an idea of flavour profiles and soak up that beer. Elevated German food for the win!

Chef Bruce Kalman is feeling all the feels for Lee Ann, he and his wife are adopting a baby right skippy and he will be looking our for Lee Ann as much as he can.

Best Backstory of the Day goes to Brother Luck, who's making a spring roll based on the fact that his parents traveled across Asia as exotic dancers. Just as I'm wondering if that means "exotic" Brother tells us that his dad's stage name was "Mandingo, King of the Topless Go Go Boys" and my mind is blown.

Whole Foods time! $600 which will get you four heirloom radishes and half a pound of applewood bacon.

Tanya makes the point that she was much more free in Europe, she loved it there. In the US she's much more likely to be judged by the colour of her skin or her gender. Since I'm Canadian I could make a reference to the most obnoxious of the British coming over and founding the US but I probably have that wrong.

Ahhhhhhhh Chris is buying pre-made sausages and pretzel rolls, who are you??? Thank the gods you have immunity, fella, is this because of the drinking in the bar? I hope there is support nearby or meetings, depending on how you roll.

Lee Anne is not doing well. The altitude and dehydration have put her in the hospital, this might not be your time, mama.

Adrienne is confident in what she's doing, I like that she's got the radler already sorted. Everyone cooks and cooks and I saw a metric tonne of bacon so now I'm hongray. I love how supportive the chefs are of each other's food! Fatima is making a Black Forest Cake, huh. I would not have guessed that would be huge in Pakistan but I would be wrong.

Judge Tom Colicchio comes in for his temperature check; he and Keegan sideeye Sasto III's tiny freeform sausage balls but it's chef Carrie Baird who gets the most time. She's making a David Hasslehof (like Hasselback) potato! Now I have to go check to make sure he's alive. Whew, still kicking!

Time to wrap for tonight, Sasto III is starting to see how difficult it will be to pull his meal off. We'll see how he does tomorrow.

Back at the house Lee Anne is there to say her goodbyes, the altitude is taxing for her and she needs to take care of herself. Maybe we all cry a little.

Now we're at the venue for the event as a storm rolls in, wind and rain making everything exceedingly not awesome for our German Beerfest. Note to self: do not go to Colorado in February.

Judges Graham Elliot and a tonne of others have arrived, let's get to tasting!

After the challenge is over, the chefs congregate in the back and wait for judging and Chris spills about his bad day. The drinking aspect of the challenge brought him back to bad choices he made while drinking and he had a hard time shaking that headspace. Thank the gods for that immunity or this would be the last we see of our Amish soulfood chef from Brooklyn. I hope there is support there in Colorado for him, addiction is no joke.

In the top are Bruce, Claudette and Tanya yay! I think this is gonna be Claudette's challenge! But no, it's Chef Tanya and I am so happy for her! She had a couple of wobbly weeks but she did a fantastic job! Congrats Tanya!

And now in the bottom we have Brother Luck, Joe Sasto III and Adrienne. I know we have to lose someone, but I don't want to! Even Joe (who I roll my eyes at alla time), he has a huge knowledge base and I want to see more of his interesting and innovative food. I would be most disappointed in Adrienne leaving, I feel as though we've barely met her. They don't pull Chris aside to tell him he dodged a bullet, so maybe he was worried for nothing (premade sausages and rolls!).

Adrienne has consistently undersalted her food based on a previous chef's direction, which is awful. Tom advises that she forgets that entirely and cook to her own palate.

Now I'm worried about Brother, they hate Joe's food and drink but this is his first time in the bottom, I doubt he will go home today.

I don't want to lose anyone! We already lost Lee Anne, can't we just do that??

Oh and it's Brother that is sent home and we definitely all cry a little. Until next time you guys!