Hi everyone, how was your week? Mine was good too! Are you ready for Top Chef Restaurant Wars in Colorado? ME TOO! Rolling S15:E08 after the break.

It was a rollercoaster ride last week, with previous week winning chef Tanya Holland sent home after a disappointing team loss at the Top Chef Olympic challenge. Nobody stuck up for Tanya when she disputed fellow chef Claudette Zepeda-Wilkins's account of team playing, but now they seem to think Claudette is following a pattern. When Claudette was in the bottom early in the season, she blamed chef Adrienne Cheatham but was still sent home. This time she stayed and it was Tanya who left, but a whole lot of bitterness remains.

I'm blue, I dislike unprofessionalism masquerading as a personality conflict. I also didn't like how it seemed to be Tanya against the whole group, she was an excellent chef who I think was sidelined for showing her anger and speaking too sharply. Claudette was more typically feminine and not seen as the problem.

I am still very much looking forward to seeing her food, just bummed that those double standards still exist.

Okay, shaking it off we're here for the food! And it's time for Restaurant Wars, host Padma Lakshmi is waiting for the cheftestants with Eric and Bruce Bromberg of Blue Ribbon! 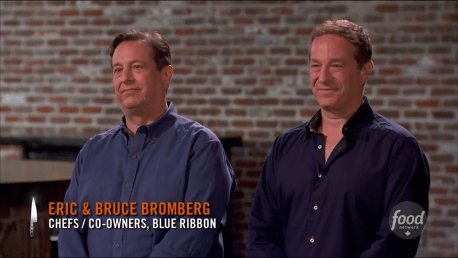 Who wants to bet me that Bruce Kalman knows dese guys?

Knife drawing for team captains! Carrie Baird is one, Amish soulfood chef Chris Scott is the other.

I'm worried about Chris, he seems off his game mentally. I hope he pulls it out and gets his spark back, he's an excellent chef and I dig his food.

One of the Brombergs explains this round of Restaurant Wars: 3 courses with three choices each, which means 9 dishes per team which means YIKES. That's a lot of different food to turn over quickly and perfectly, more than 2 each).

Oh but they don't have to split it four ways, people are coming back! Jaysus, what have they all been doing, sitting next door in the Almost Top Chef House?

And hey, since you've already been eliminated at least once, probably twice because of Last Chance Kitchen, maybe THREE times, here you get to parade your bum out to probably not get picked again.

You gotta have a thick skin to be on this show, triple that.

Carrie chooses Tyler Anderson right away, Chris takes Brother Luck and not Tanya and I am disappoint.

A quick infomercial for Cratsy and the chefs are released to plan.

Chris and the Red Team choose Common Place as their name and their theme. 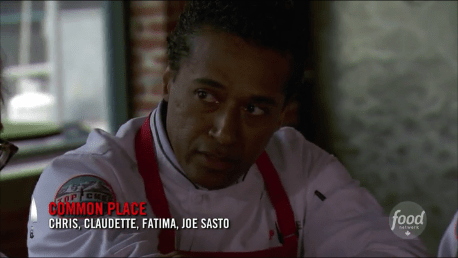 Just remember who Chris and Fatima are dealing with: Joe Sasto III who insisted on running his last team into the ground. It's not that he doesn't have good ideas, because he does, but he insists on having ALL the ideas. He talked Paris-trained pastry chef Laura Cole (whom we saw for thirty seconds earlier) out of making dessert because he had ideas for that. He wants them to choose an ethnic background but nobody else wants to be that specific.

I will just say that having a comprehensive theme is key to winning, so he's not wrong but he's still too farking rammy.

Carrie is not having issues on her team at all, they're going with a Colorado theme, which means Italian Mediterranean (it DOES?) and Conifer. Nobody argues, everyone riffs on it, let's congratulate our winning team!

Roles are assigned: Joseph is Front of House, Bruce is Executive Chef (with Polenta Meatballs) and they spitball while Common Place decides they're doing "Unexpected" which is not a thing.

Chris assigns Front of House to Fatima (not EC?) and EC to Claudette which confuses me. I do not see Claudette as overly confident and you need a strong voice to run the pass. Hm. Well he knows her better than I do, but he probably didn't hear her saying right after that he likes to avoid responsibility. I say WHAT?

I would guess he was trying to keep her off the line, but I'm still smarting after the loss of Tanya.

The teams meet with Craftsy, I tried super hard not to roll my eyes but I am only human my friends.

Whole Foods time! Hahahahah Chris has overalls as I do! Menus! 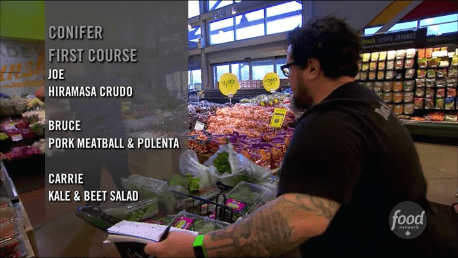 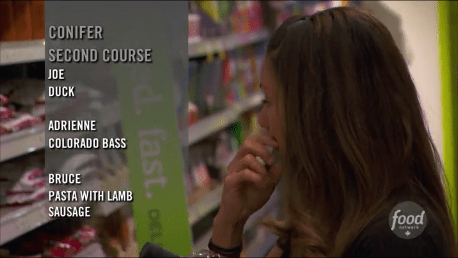 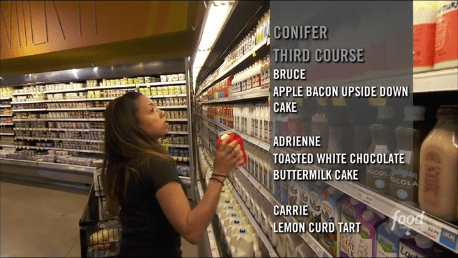 Back to the prep kitchen, our helpers show up and everything seems to be rolling along well. 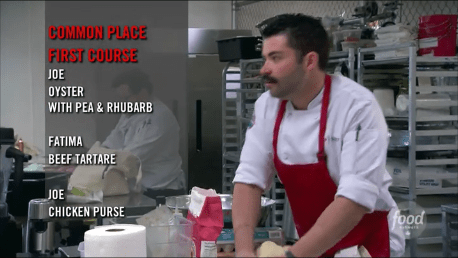 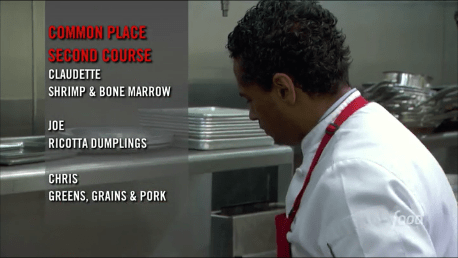 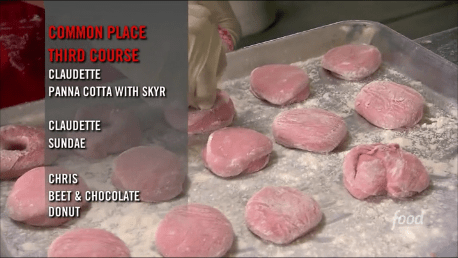 Lots of helping each other and so many beets! SO MANY BEETS! Why are there so many beets? Carrie is making "raisin beets" which are like an adult gummie bear. You had me until "beet".

Dayum, Claudette has nothing good to say about anybody! She drags Adrienne for her boring fish meal (remember the salt, m'lady!) and Carrie for her expected kale salad.

Tom Colicchio and some Brombergs come in for a temperature check, Tom laughs when he hears that there aren't any ladies on Front of House.

It gets a little more HUH over on the other team, Tom is visibly surprised that Claudette is Executive Chef; she immediately points him at Chris who says there are no egos on his team.

Back at the house the teams shittalk each other and plan the reservations and front of house, I've never seen as much planning for that as Conifer is putting into it! That's smart. They also choose prep-heavy / easy execution dishes, that's also smart.

Joseph and Fatima prep their servers and dining rooms for front of house, I am confused about Sasto III not being EC, amirite? He's born pushy, you want that on the pass. Instead he's cooking three dishes.

Already we have some major differences, Fatima comes up when she sees a crowd of people arriving but leaves the greeting to the host and turns right around. Joseph is all over everyone, it's kind of glorious. What is Fatima doing if she's not interacting with guests and monitoring their satisfaction?

Bruce might seem like a cuddly bear (ENOUGH) but he lays down the law immediately for the waitstaff as per tickets, that's what you want on the pass.

The judges are eating at Conifer first, Gail Simmons has joined Padma, Tom and all the Brombergs. They like the decor (snooze) and menus, Gail makes fun of the obligatory kale salad as she should.

Tasting Time! The judges call it Safe Food but they like it.

Fatima is struggling with her servers in Common Place and food is even being sent back.

When restaurants get slammed, you need an EC that is going to ride herd on the kitchen and push food out fast. Claudette is not doing that and there is a huge wait in Common Place. Fatima is offering cocktails all over the place but they need more food coming out faster.

And that's it for Conifer, the judges move over to Common Place where Fatima is literally pushing people off tables. I have never seen that, Front of House telling tables to get out because there are people waiting for food.

The judges show up to see dozens of people waiting in the lobby. They are seated right away (COURSE) but find the dining room much more casual and I don't think they like it as well as Conifer. They do appreciate the more ambitious menu, however.

First round for Common Place! Joe does two?? It does not go well

Not having enough beet flavour is not a thing; does your food taste not enough like dirt? No? Good

Wow, Fatima only did one dish? Leaving Joe and Claudette to do three each? The judges have been paying attention to the front of house with Fatima as well, she's just kind of...vague?

So we knew Common Place was going to be in the bottom, I have to wonder who's going down. Not Joe for sure, who else in on the block?

Conifer wins, course, the cohesion of the concept and control in the kitchen made the difference. They get all the love for their dishes but it's Joseph Flamm who wins for his excellent Front of House and food. He beams!

Now for Common Place, where Fatima is called out first not being involved enough in Front of House, which she argues. Joe gets read for his badly cooked food, which is surprising. But it's Executive Chef Claudette that gets a laundry list of things wrong read to her, she wasn't tasting and checking dishes as they went. Let's see who she blames that on!

Chris! She blames it on Chris because he appointed her and Chris tries to take that bullet while everyone squirms.

He's being real, and I respect that but Claudette accepted that role. They're excused to the backroom where Carrie reminds Chris that he isn't responsible for everyone's mistakes: he just pulled a knife out of a block.

I am going to be so mad if Chris gets sent home.

Okay, it's not Chris, it's Claudette and she walks out without saying goodbye to anyone. Wow. Now I get why her interviews were so angry. She ends with a comment about Top Chef going vanilla and honestly. I can't even imagine how much of a rollercoaster it must be to be on this show, go home, come back and be sent home once more to compete in LCK once again but it must be EXHAUSTING. I liked your food, I will miss your contributions but I will not miss all of this. Hold on, it must be said again: Claudette always put out really interesting combinations of flavours and I will definitely miss her creativity.