Hey there, we're about to wrap up A Confession from itv today, are you ready? Sure you are, let's roll into the finale of A Confession after the break.

We open with the police reminding us very firmly that they did not FIRE Detective Superintendent Stephen Fulcher (Martin Freeman) but rather he chose of his own free will to resign after two, count 'em, two final disciplinary warnings and being busted down to running the local Bobby Van. No pressure or duress whatsoever.

It's 2014 and Steve is not teaching intelligence forces in Benghazi, Libya but a bomb going off nearby throws off his rhythm. He videochats later with his wife Yvonne Fulcher (Kate Ashfield from Line of Duty!) who remains concerned about his work environment. He lies about the bomb, then lies about caring about her news of the police brass shuffling around.

As soon as they hang up, he's on the phone to his former right hand person Deborah Peach (Faye McKeever) asking WTF? The police still haven't charged Christopher Halliwell (Joe Absolom who apparently is a big hit with fans of Doc Martin) with the murder of Becky Godden-Edwards (Stephanie Hyam) even though he informally confessed to it and led them to her body. Been a few years, think they could dig up some evidence, yes! Even though the new head cheese has been talking about bringing him back, Steve says he'd rather be out here with bombs flying around then there.

*This is not an important plot point, but I think it's interesting that he lies to his wife of many years about A) his interest in police gossip and B) the bombing around him. He's much closer to Deborah, whom he clearly feels he can be honest with in a way he cannot with his wife. He still lies about not wanting to come back to work in England, tearing the handle off the phone to get the gossip straight from Debs. I bet she knows that though.

Back in England Karen Edwards (Imelda Staunton) is still doing her best to get justice for her murdered daughter Becky. Becky was only found because police were looking for a missing woman named Sian O'Callaghan. Sian was a regular person who had a strong family support system, a regular job and a nice (if severely miscast) boyfriend whereas Becky was a drug-addicted sex worker. I'd rant about that, but I did in the last recap already.

Halliwell pled guilty to Sian's murder to spare her family and to spare himself having to answer a lot of questions he actively avoided. Karen wants to post an open letter to Halliwell so he'll do the same for Becky.

Speaking of Sian's family, we've got her boyfriend Kevin Reape (Charlie Cooper) visiting Sian's mum Elaine Pickford (Siobhan Finneran); Kevin's struggling with guilt over how Sian died. Kevin had left the pub before Sian, what if he had stayed? But that's not why he's there anyway, it's because he's started seeing someone else. He wanted to tell her so it wouldn't be weird, Elaine offers to meet with his Emma (Rachel Shenton) before Elaine marries Pete the Pilot (Derek Riddel), the controlling fckwit Elaine's consented to share her life with.

We first met Sean Memory (Owain Arthur) as a Detective Inspector, since Steve left he's been promoted to Steve's old role of Detective Superintendent. Not that he's getting anything done, though, still no evidence to convict Halliwell for Becky's murder. Not even enough to charge him. However, someone crisp and familiar looking explains, if Halliwell says he hadn't ever met Becky, that would be enough to challenge him, given his (thrown out) confession.

That would mean Steve would have to testify, which makes Sean shirty, as there's no love lost there.

Elaine meets Kevin's new girl Emma, remembering meeting Kevin with Sian (Florence Howard) for the first time, everything is just a little tinged with sadness. Sian and Emma could be sisters, too.

Elaine tries, but this is a very upsetting meeting for her, understandably.

DC Tracy Joyce (Mamie McCoy) and DS Bob Cooper (Dominic Tighe) finally arrest Halliwell for Becky's murder, he specifically does not ask for a solicitor. In fact, he says he doesn't want one. GET EVERYTHING ON TAPE YOU GUYS.

Ahhhh, Halliwell wants to make a bargain: he comes clean about Becky and they stop trying to find the likely other 6 women he murdered. That's got to be a difficult choice, but not to Sean Memory who jumps at the chance to get his own confession that wouldn't need to involve Steve Fulcher. It would probably be more difficult for him were he actually investigating those other 6 murders.

I'm sorry, I know this is based on a true story so I don't want to be inflammatory to an actual person, but you seem to be a bit of an arsehole, Mr. Memory.

We cut to Elaine and Pete's wedding, she's in a gorgeous red dress and he's dragging Sian into his post-ceremony speech. It kills the mood instantly, thanks, Pete! Angry, Elaine heads to the bathroom to calm down. She asked him specifically not to do that, but he had already decided and made up a little speech so didn't listen. Her friend Jackie (Anna Wilson-Jones) follows her in, does she really think Pete's going to do anything differently than he has?

Ah! Crisply Appointed and Recognisable is Ian Harris (Jonathan Aris who has been in everything where I thought I knew him from: Game of Thrones), he is still advising Sean and he has good news! Halliwell's decided to defend himself, which must be like Christmas for a prosecutor. His first choice is to deny knowing Becky, which brings the confession and Steve Fulcher back into play.

Steve is not happy about the news that he may have to go to trial over this again. Sean tells Karen and her husband Charlie (Peter Wight) that they may see justice for her daughter after all.

Elaine is struggling in this mess of a marriage; she gave up her job and even her car for Pete but she can't even imagine any sort of confrontation. Obviously that's because of her daughter's murder but Pete controlling everything she does isn't helping.

Steve's family is ecstatic to see him back in England, reason be stuffed.

Even though Karen and Elaine have been through the unimaginable and literally live only doors from each other, they don't speak. Mostly because Elaine did not want her daughter's death associated with that of Becky's, who has a more complicated person history.

Their proximity is such that Karen can look out her window and see...Elaine packing her things hurriedly into cars with the help of the rest of her family. She's leaving Pete! Hallelujah!! Lora O'Callaghan (Jessica D'Arcy) is there with big brother Liam O'Callaghan (Jake Davies; I spent several minutes trying to find out if he's related to Karl Davies without any luck) and little brother Aiden (Rufus Gerhardt-Williams).

It's tense between Sean, Ian and Steve, especially when Ian triumphantly informs Steve that the confession will very much now be in. Since Steve lost his career over the same, you can see how he'd be salty.

The trial starts with a circus outside, Elaine and Karen are both in attendance but don't speak. Karen is first to give evidence, talking about Becky and how long it had been since she heard anything. Next is Miss X (Dominique Moore) who was a close friend of Becky's and also a sex worker familiar with Halliwell. She's been granted anonymity as she got out of the life, her husband and family don't know of her past.

Girl. You need to tell them. It's better coming from you.

Here's the bad part of Halliwell defending himself. He gets to cross-examine witnesses that are testifying against him, like Miss X who says he was obsessed with Becky. She obliterates him.

Ah it's sort of painful watching Halliwell try to attack following witnesses, he's also trying to give evidence at the same time and you can see why prosecutors would both love and hate a defendant defending himself. At least he has a decent chance of a fair trial if he has someone trained in legal matters, that has to matter to officers of the court somewhat.

Steve has to sit in the hall and wait to be called, he isn't the first day but is up first the following.

Let's just say...Steve sums up the next five minutes the best.

Halliwell invokes drug dealers with vast holdalls being carried in his cab, Steve threatening his daughter (?) and a complicated revenge plan that Steve is able to beautifully defend so gloriously that you can forgive Halliwell his ridiculousness because it makes everyone come across as measured and sane.

Halliwell does get one good shot in, telling Steve "it was a pleasure ruining your career, you corrupt bastard."

Ooooooooooh I felt that from HERE.

Now Halliwell is on the stand, since the cases are connected now Sian's family has to hear him answer for what happened to her. Le yikes. Crown prosecutor Nicholas Haggan QC (Jo Stone-Fewing) makes short work of him, and accomplishes something else important as well. He's able to connect Sian and Becky as victims for Elaine, just two young, vulnerable women out late at night of a similar size and age. Elaine still does not talk to Karen.

The verdict is in but Stephen Fulcher has had enough of Christopher Halliwell for now, he leaves the courthouse instead of filing in with everyone else. Halliwell is found guilty of Becky's murder and is sentenced to a whole life order, effectively meaning he will not be released to attack anyone else.

It's bittersweet for Steve, who did lose his whole career over this showdown, getting a murderer off the streets but losing himself, too.

During the trial, everyone watched in disbelief as Halliwell spouted nonsensical theories off the top of his head, but it seems not everyone heard what we heard. Becky's dad John Godden (Christopher Fulford) won't rest until he finds Halliwell's mysterious drug dealers who were REALLY responsible for Becky's death, not the man obsessed with her who also murdered at least one other young woman the exact same way.

There are dueling press conferences held, with the police saying exactly that Steve Fulcher left them nothing and the win was all due to Sean Memory blah blah and Karen firmly thanking Steve Fulcher for bringing her daughter home.

Elaine and Kevin watch Karen and her family regroup in the parking lot, Kevin encourages Elaine to go talk to Karen but she can't bring herself to do so.

We end with Steve talking on the radio/podcast(?) defending his decision against police procedure. Is it okay to breach a suspect's rights when you know there's a possibility that someone's life is on the line? Police procedure says losing a victim is an acceptable loss based on PACE, would you agree if that was your daughter or son? Or is it important to maintain the system as we have it, protecting everyone in a nondiscriminatory fashion, killer and victim alike? Hm.

We're out with Captions of Truth, which are my absolute favourite things about true stories. 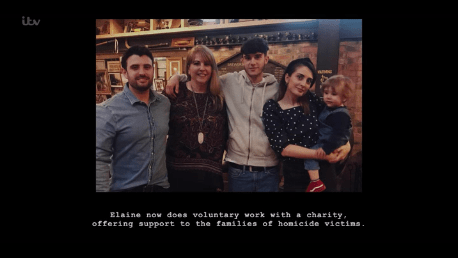 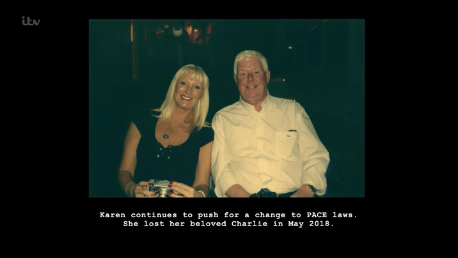 The casting on Charlie Edwards is uncanny, but I don't imagine Karen Edwards saw herself physically in Imelda Staunton, who was the heart of this show. 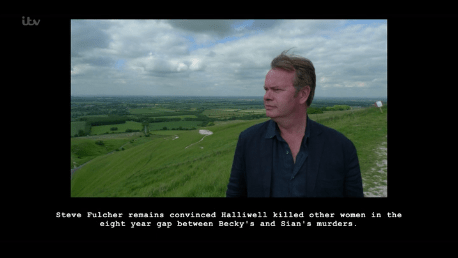 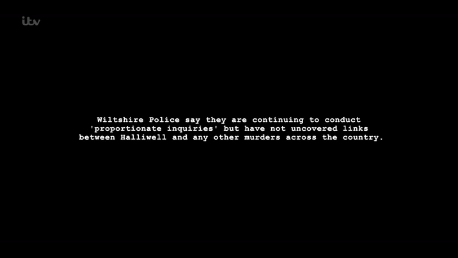 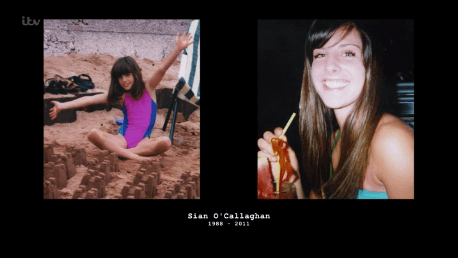 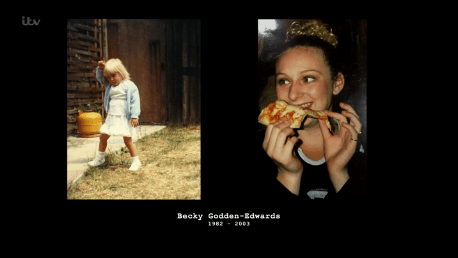 Thanks for reading along, everyone.