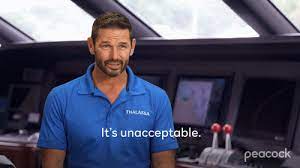 It's almost time for Below Deck Mediterranean, may as well watch a Below Deck Down Under in the meanwhile, knowwhatImsayingandIthinkyoudo! We've got some personnel problems aship superyacht Thalassa, is Captain Jason Chambers ready to make some changes on board? Let's find out after the break in my recap of Below Deck Down Under S1:E08 Prom Night!

We've not only got unruly chef Ryan McKeown to deal with on BDDU, we've also got a power struggle betwixt Captain Jason Chambers and bosun Jamie Sayed. They have very different opinions on what constitutes safe work practices aboard the Thalassa. Jamie has been stymied in his efforts to lead his deck crew away from micro-managing Captain Jason and Captain Jason has upped the ante by throwing more and more challenges at this somewhat non-cohesive crew.

It's not going well.

Deckhands Culver Bradbury, Brittini Burton and Ben Crawley listen to Jamie rant about Captain Jason's unsafe direction but their indecision is written all over their faces. Captain Jason has been giving them most of their direction, now their actual direct boss is telling them to not listen to the person in charge of the whole boat. This is not a great position for anyone to be in.

The guests dress for dinner, unaware of any drama and I have to admire the styling. Aerospace engineer and Primary Charter Guest Jenale Scarlett and friends gather in the salon for drinks, lemme see if I can gather some names. Tom Gay from the USA is in attendance, so are Tee, Sara, Dani and Luda, who else do we have??

Chief steward Aesha Scott calls chef Ryan McKeown to let him know guests are heading to the table; Ryan brags he has a pasta extravaganza planned. Guest Tom couldn't believe there was only one course for lunch (shellfish, no carbs, no sides) so Ryan has created a meal of mostly carbs and I just don't know what is wrong with him!

Ryan pretends to barf referencing gluten-free food; I cannot help but compare him to the incredible Marcos Spaziani from the last season of Below Deck Sailing Yacht. You were so lucky, Captain Glenn Shephard, I hope you know that.

Especially since the gluten-free mushroom risotto is bland and undercooked. They don't say undercooked but I can tell by the way Primary Jenale and guest Gabrielle chews.

Jamie continues to fume below deck, he's got to find a way to effectively lead while acknowledging he doesn't make the big decisions. I wish he'd waited to talk to his crew about that, even Benny (whose had an attitude problem since the jump) grits his teeth at Jamie calling Captain Jason unsafe.

Jamie bangs the tender off the swim platform at the rear of the boat; it's night and I don't understand why any of this is happening.

We're back at the table with guest Sara showing off her whole arse to display her tattoo about spiciness? Or salsa? Maybe hot sauce.

Captain Jason pops into the galley to tell Aesha she's going SCUBA diving the following morning with him; she has her certification. You know when little dogs with high pitched voices get really excited their tones hit another entire register? That's Aesha right now.

I think third steward Magda Ziomek is fighting with her soulmate boyfriend, perhaps about the picture he sent on himself and a lady friend in wet suits. They keep showing Magda texting but it's usually to say she can't talk, which they are juxtaposing against second steward Tumi Mhlongo working her butt off all the time, currently in laundry. Tumi is sent to bed at 10 pm.

All that bland pasta sits in the crew mess, mostly ignored but heavily seasoned by anyone who tries to eat any of it. The guests are tired after that meal of straight carbs and mostly head to bed except for Sara and Tee who end up in the hot tub. I feel like Tee would be a really fun handful but Sara seems to be jusssst buzzed enough to be chill.

Right until she throws up in the hot tub.

Magda and Benny have to deal with the mess; I think they drain the hot tub regularly so maybe it won't be a big deal? Of course Benny makes it a big deal.

Magda wakes up Aesha fighting with her boyfriend in Polish at 3 am. Aesha asks her about it in the morning, but her comparing her awesome relationship with boyfriend Scott irritates Magda who is feeling much less secure.

Jamie works with his deck crew very hands on this morning, he's unsure of his relationship with Captain Jason. Primary Jenale is first up in the morning and hitting the gym, I love it! The rest of the guests aren't far behind, asking for all sorts of breakfast drinks. Aesha tries to get Magda's help, but she's busy text-fighting with her boyfriend.

Magda doesn't like Aesha correcting her all the time now, Aesha has just started actually giving proper feedback instead of focusing on not crushing Magda's spirit. She feels as though Magda should be getting things better by this time and Magda starting to talk about being profiled for being an Eastern European model is...code for 'they jelly.'

I'm so confused with breakfast; Magda has been placing food on the table without serving any of it. She's not even bringing tongs for every platter and until Aesha comes up and starts properly serving the guests are dishing up themselves.

Of course they CAN but when you're paying 6 figures for a two day vacation why WOULD you??

We're having a prom night tonight; I can barely believe Brittini has never been to a dance with a date! She's so cute! She shows flashbacks of herself in a high school cheer outfit, how did this girl not get asked to prom?? The guests will all be paired with a crew member, here are the matchups:

-Primary Jenale and Tumi - he calls her a 'real one' and she swears one day she WILL be married to a Primary!

And I'll have to wait to find out the others because they cut away to show us a montage instead. FINE. Ryan pouts when he finds out he hasn't been chosen to have a guest prom date but I sense producer fluffing on his 'f*&^ you, Aesha.'

Diving time! Aesha gets ready as the guests get a tutorial and we get diving shots woooooo! I love all of that because I am not there and nothing can touch me!

Magda is supposed to be doing laundry, she continues to fight with Maciek, the Polish Boyfriend.

Guests Tom and Gabrielle have a dance party on deck by themselves and that's favourite part of the last 8 episodes. Maybe the last 8 weeks in total.

Brittini tries to lift anchor but she's not familiar with it yet so asks Culver in the anchor pit for help as Captain Jason gets more and more impatient. The deck crew is just not working quickly enough, Captain Jason is done waiting for them to catch up.

Culver calms down a distressed Brittini after, she had grabbed the wrong controller as pointed out by Captain Jason and she's feeling flustered. Culver tells her she's doing a great job, rushing is what makes these problems crop up.

Jamie talks with Captain Jason later; Captain Jason doesn't think anything unsafe happened and blames the rushing on the deck crew being unprepared. I don't know.

Ryan has put together an Asian meal for prom night, pulling from several different cultures but sure. Korean, Chinese, Japanese, sure, those are all Asian and maybe go together in some fashion.

Our other prom couples look awesome! They are:

- Culver and...Luda? Is that Luda? My kingdom for a name plate! He picks her up in a honeymoon sweep because of course he does

- Britini and another guest whose name I didn't catch

Ryan is the only person not participating; he's asked to take a photo and does..not. Captain Jason has to go get him, after waiting and waiting. This is for the guests?! What are you doing, Ryan?

I feel like prom is a much bigger thing in the US, hey?

Now the Interior has to serve and clean in prom dresses, hahaha, that looks like such a pain.

Captain Jason doesn't agree with how the food is presented, but gorgeous guest Gabrielle is more focused on his presentation. It's very cute and not the least bit creepy, though, I like them together! I think she's even Australian, unlike most of the guests who are American.

Captain Jason does The Worm and breakdances to get the party started, where did that come from??

There is a huge mess to clean up after prom, Magda does none of it and even stops Benny from helping, going straight to bed to make up with her boyfriend via text.

Aesha can't believe the mess in the salon and the laundry room in the morning, Captain Jason expresses his concern at the same time. Things get a bit crunchy when Captain Jason gets involved.

Aw it's already time for this charter to leave, I'm so sad! I quite liked this gang, especially Tom and Gabrielle. Sheer joy from those two, and Tee was hilarious. A very brief departure (one reference to the crappy pasta night) and Primary Jenale and friends are gone!

Magda is given the discoball helmet of shame for her nipple exposure and dropping a service glove down the toilet, let's see if she wears it tonight!

First the Interior team has a meeting in the salon, Magda takes alllll of the feedback personally and negatively. I'm not sure how all of that is going to play out. She's getting disgruntled while not stepping up her game at all.

We end with a preview of the rest of the season, I am so sad we get so many scenes with Ryan. I thought maybe we would be replaced at some point by someone who wants to make fabulous food but it looks like we get a few more charters of phoning it in. Wooooo. Until next time! Cheers!