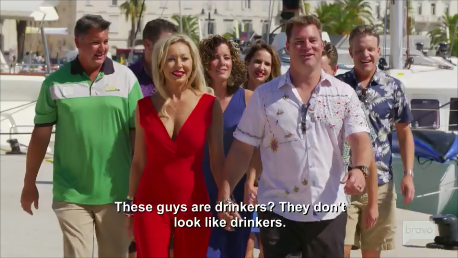 Hi everyone and welcome back to Below Deck Mediterranean, our chubby three-way Okies Ken Novotny and gang are back! Are you 'CITED?? I AM!! My recap of when they came aship the Ionian Princess last year! Let's find out what's going on with onions this week on Below Deck Med.

We left off last week with deckhand Malia White being kissed for the second time by a co-worker; I can't tell is she was into the Chef Adam Glick snogging or not but her face said she wasn't digging her boss Bosun Wes Walton planting a couple on her earlier in the evening.

I'm sure everyone will deal with this rationally and not immediately call Malia a whore for being kissed by two guys in one night.

Malia beelines back to her room; but she can't cover up the crime scene fast enough!

Deckhand Max Hagley wants to know: was she playing Batman and the Joker? Meanwhile, Wes is receiving counseling from Dr. Bugsy Drake

About how he should just go for it, straight ahead, sailor! As Adam walks behind him so he can listen in on what's going on below. Deckhand Bobby Giancola realises this is a two-horse race, and he doesn't even need to saddle up. Take a lap, FunBobs.

I was on the fence about Malia, but I LOVED her confronting third stew Lauren Cohen, while she's gossiping to chief stew Hannah Ferrier about her. Lauren is just as basic as it gets and I laughed out loud when Malia shut her down hard for wanting a high five for "a lady never tells" when Lauren is doing everything she can to find out WHO.

And then follows her to her bunk to reiterate: if you have something to say about me? Say it to me. Lauren ducks and weaves as best she can, but Malia is giving no quarter. Lauren finally runs out and finds a schwasted Adam in his room, COVERED in Malia's lipstick.

And the chase is on. Malia corners Lauren on deck; go ahead and say it, Lauren. Say it all, but TO her face. Both Wes and Adam kissed her tonight, what's she got to say about that? Apparently it's not a good look, but neither is threatening to go home after someone calls you on your basic betch bullshite, Lauren.

I just watched Invite Only Cabo (YOU SHOULD WATCH) and it was waaaay more fun in a similar situation. I get that Malia doesn't like to be gossiped about, but this is a small boat and you're on top of EVERYONE.

Hannah's in with Wes now and when Lauren heads in, Malia heads everyone off at the pass, telling Wes that Adam also kissed her tonight. He leaves, disillusioned because he thought he had a connection with Malia and it felt natural to kiss her, against all his rules about not messing with the help. Hannah's just over it.

It's all good in the hood in the morning; Adam and Wes shake on their mutual "good taste." Hahahaha, see? No drama, Adam even comes up on deck for a group hug with all three of them!

HAHAHAHA How can you not love him?? Malia's just happy they're being cool. It's because they're not LAUREN.

The guest preference sheets aren't too bad, except four have requested no onions. I have ALLS the experience with no onion peeps, just grate them! They'll never know. They want to go to the Krka Waterfalls and do a water toy obstacle race, all easy peasy for this crew.

Malia expected to get teased and the deck crew is obliging, but Bobby's "who's next??" was just a little much.

The boat owner has upped the ante for the crew; they've sent a slide and a trampoline. Everyone groans, they HATE the slides! I'm just wondering if there is a critter-free pool packed in there anywhere? Hm?

Malia and Lauren make up; they both had their blood up and there's no need for more ugliness. In interview, Lauren says she's willing to pretend it never even happened, but only brings up the stuff Malia did, not the choices she made.

Hannah and Wes make the guest schedule, then he goes upstairs to have Bugsy try her level best to rile him up while Hannah makes it her business below deck with Adam. Adam and Wes are SUPER chill, but there is no way Adam's giving up on Malia, nope. No matter how much Hannah tries to make him feel bad for poor Wes who broke his rules for the very first time last night.

They're so happy to see Bobby, he's their big Bobby Beefcake! Hugs for everyone!! By comparison, Hannah makes stilted conversation and talks about seeing familiar faces during the boat tour. Ken and Amber are very polite, they're nice folks.

A little concerned as to how all 8 of them will fit in the hot tub, so you know: nice and freaky folks.

Wes gets to de-dock the boat!! He's so excited; Malia thinks it's sexy AF but really: Captain Sandy is tired of that jeezly stern line being in the water and now he gets to worry about it!

Adam spars with Hannah a bit and then sends up the first course; a tropical slaw with full grilled green onions all over it. Now. Green onions are onions and Primary Kenny is willing to pick around them (he's one of the ones with No Onions on his sheet) but his wife is pissed. It's NOT okay; when you are paying that kind of money and you specify no onions, I would expect that they would at least hide them better.

The deck crew works on getting the slide out right away; it looks very complicated. But fun! I don't know about this inflatable trampoline business, but that slide looks AWESOME! Except: I am afraid of slides. And slides that go into the ocean where stuff might touch me? I'll be up top at the gym.

Hannah's been impressed with Lauren's improvement, she's sending her third stew to help the guests at the Krka Waterfalls, woot! Lauren's happy, it makes her feel important. Malia is coming too, Hannah's more than happy to NOT do a picnic lunch on the beach for the guests, have at 'er!

Malia's been wearing Adam's hat all afternoon (Wes totally noticed), when she goes to return it, Adam refuses.

Dinner time! Hannah comes off her break in time to seat everyone; one of the chubby Okies makes a toast to nipples: "To nipples. Because without them, titties would be pointless." It's no

From last year, but he tried. Adam's cooking Cajun, why would he do that when onion is so important to Cajun cuisine? It's part of the holy trinity! Primary Kenny sends his plate back.

Adam complains, but sends out another dish while passive aggressively hollering at the air AROUND Hannah. Very odd. He left chives in, so Kenny won't eat that one either and Amber Novotny has HAD it. She's going to talk to Hannah, who's embarrassed that she has to be pulled aside by a Primary charter guest.

Adam thinks this is a New Money problem, where these people are flexing their fiduciary muscles for the first time but really? They just want to eat an incredibly overpriced fancy meal that doesn't have THE ONE THING THEY REQUESTED NOT BE IN THEIR FOOD. Thanks.

Another plate! Adam does that thing again where he sings insults at inanimate objects and it's freaking Hannah out. Just. Cook the food, Adam, and chill the eff oot.

Turns out she thought he was calling HER a slut, I didn't get that at all.

The guests take to the hot tub, they've already gone through 6 bottles of vodka! 6!! In not even one full day! Hannah tells Wes they gotta make a liquor run and sends Bugsy to bed. Lauren is just now realising what she's gonna be up against at the waterfalls, and the guests aren't even done yet!

Aww, look! It's Naked News all over again, but with a bottomless dude! The look when the other guest remembers the camera is fantastic; it says "Now my mom can't watch!"

It's the next morning and the guests are up and atom already! Woot! Bugsy is talking Lauren through the timing of the picnic when Lauren blurts out that she wants Bugsy to come too. Bugsy reassures her; she'll be fine, the boys will be there and can help. Lauren does not think the boys are going to be any help and she storms away while Bugsy interviews that she thinks Lauren's middle name is Overwhelmed.

Wes docks the boat beautifully, Hannah is less impressed by Bugsy's recommendation of sending another stew with Lauren. I think what pissed Hannah off was that Bugsy framed it like "I think we have to send another stew" implying that she shares in the leadership decisions made aship. HOW MANY STRIPES DO YOU HAVE, BUGS? HUH? HOW MANY??

Bugsy gets it done, though, she's fast, she's organized and she's efficient. Adam is in awe of her skills at getting ready for the picnic; it's not at all like last season where a dude left the keys for the boat an hour's drive from where the boat was.

Wes and Hannah are provisioning (read: getting more Grey Goose) and oops, the boat has been delayed an hour. Adam is increasingly worried about his food sitting out; they send Bugsy to cover it with a blanket (to ...keep it even warmer?) and Adam lights into Hannah about not being on top of the delays. It ends with "maybe Bugsy should be chief stew?" Hannah claps back that maybe they should get a chef who can read preference sheets and we're out. Looks like we're not done with the onion problem, though, next week looks messy! Until then, y'all!