Hi guys! I'm behind so I'm doubling up on shows, how is everyone digging Invite Only Cabo so far? I liked it much more than I expected; these are real people! Well. Real rich people with foobies, extensions and more hair product than a Paul Mitchell hair model, so. Rolling S1:E2 Dancing With The Devil recap after the break!

To recap: Emily Moses stormed out after being chewed out for chewing and spitting her french tips onto the floor and Kamani Alana was OWT. Just to the bathroom, which is good, because Emily only wandered outside to have a smoke while Agu Akaogo consoles her.

Host Larry Sims thinks maybe Emily just doesn't know any better, or she'd do better but Kamani isn't having that. Everyone told Emily a bunch of times that she was a dirty, dirty betch, but she's taking it as an attack and not a Don't Pop Off Toenails Near My Food. WHY WOULD YOU HAVE TO TELL A GROWN PERSON THAT??

Agu's gonna take care of all of this

She comes back to the table, still pouting about being attacked, she won't have fake nails anymore! Gurl. It was never about the nails, it was about the chewing them off your "nubs" and spitting them on the floor. Larry tells us they've been friends for a long time and he likes her because she's "layered." I mean

Larry's laugh cracks me UP, hahahaha. They're all laughing now, except Kamani, who has kids and knows from a fake sympathy cry when she sees one.

Malaku Quisada, Jermane Britton and Bianca Banks are traveling in one giant SUV; shittalking about Emily, who's over trying to matchmake between Agu and Kamani. *slurring* "Why haven't you two had sex already?" So, like, not exactly cupid, but close?

Larry Sims has the best laugh in the world, I decided.

They're in the club now, Malaku making moves on some pretty ladies and some dude making small talk with Bianca. Kamani is watching reaaaaly closely and after she sees Bianca exchange numbers with the dude and his hand on Bianca's bum, she's off to tell Larry.

Now. Larry's off flirting with the other girls in the club, but not getting numbers that we could see, so I dunno. Emily has her hand on the inside of Agu's leg, but why wouldn't you? He's beautiful.

After that moment he said was just her moment last night! When he was off freaking with random women after kissing her and all and he was like "I WAS IN THE MOMENT" but now it's a pivotal moment in their relashie? Gurl.

Nobody knows what Emily and Agu are up to, but they have some ideas

Basically, Emily is drunk and Agu is haaaawwwt. She's jamming out with her clam out again, literally, this time on a bar seat with her dress up over her waist, reaching into Agu's lap. She knows there are cameras rolling, right? I mean, it's not like Real World where they forget after a week, it's been 24 hours!

Malaku has those two ladies coming back to the house now, these are the most chill partiers I've ever seen! Larry asks Agu about the bumgrab, "was it back or crack?" Agu thinks crack and that's it, Larry is confused and mad.

Back at the house, Emily beelines for Agu's bed, come smell this, Agu! You guys, Bianca is right there!

Emily finally kisses Agu (on the THIRD "come smell this!") and Bianca walks out. Bianca sneaks out to the pool to tell Malaku and his new friends Jennifer and Shauna what's up and his reaction made us all laugh

Agu catches them all gossiping and asks them to watch the pizza for him, he's gonna be busy. "Busy with WHAT?" by Malaku made me laugh but Bianca just about fell over trying to cover up that she ran down there to gossip about him and Emily WE GOT THE PIZZA!! IT'S GOOD! 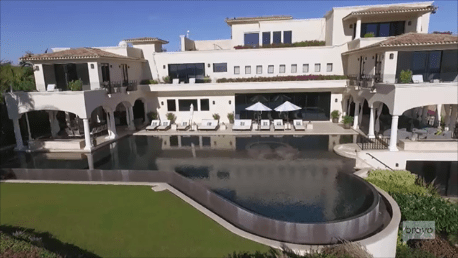 Emily makes it into the bedroom again where Agu is curled up with no shirt on; Bianca, Malaku and his entourage watch as she turns off the light: all the gasping! Hahahahaha they're so like middle school. The slightly chunky redhead guest just wants to know where the pizza is and so would I, girl, represent.

Bianca and Malaku tell Larry, who can't believe it. I do love that Larry assumed they were talking TO Agu and Emily, not ABOUT, but sadly: that was not the case.

Larry and Bianca and everyone else decide to go crash the smashfest in Agu's bed; that makes no sense to me whatsoever, but even the guests get in on it! We watch Emily take off her bra first, huh. I would not have guessed she had on supportive undergarments.

They stand there! IN the room! Watching! And then walk out to eat pizza while Agu and Emily carry on.

It's all What Would Joseph Do? in the kitchen and everyone laughing fit to pee themselves, until they hear Agu coming downstairs. They just cuddled!

He gets some pizza and goes back to bed; everyone remembers Kamani. Ooooh this is not going to be good; they're supposed to be going on a date tomorrow. Bedtime!

Malaku spills the T for Kamani and Jermane (I love his EMOTIONALLY UNAVAILABLE sweatshirt, hahaha); she takes it really well. What are those gold eye thingys under her eyes? Anyone know?

Now Larry's grilling Agu, what happened? Why were you pulling up your drawers if you were just cuddling?

Kamani does not want any of that, everyone can still have fun but she can't take him seriously. It is what it is, she's not hating the player, she's hating the game.

Bianca calls her look-alike daughter Jasmine, they could be sisters!

Emily makes it downstairs and Agu is GAWN. Larry comes right for her, no messing about and I dig how he talks TO her, not just ABOUT her. It's a sign of growth, yo.

She's claiming blackout, but she didn't do anything, did she?

She doesn't look scared, though, maybe a little worried about Joseph's opinion of her "cuddling." Everyone else comes in to pile on her for her behaviour; I honestly think she doesn't remember parts. Either that or she's a really good faker.

She washes dishes the whole time they tease her about what she was up to; she looks more and more worried with each pot and pan. She wants to go work out, can they do that? Pease?

Larry's had enough of the Emily Roast; while everyone is working out (except Bianca, who has a blanket. In the gym) he asks about Frankie. Didja get his number? Bianca says of course not (but we SAW) and no, he didn't have his hand on her bum, either. I couldn't see, to be honest, but Malaku is just trying to figure out why these "just friends" are fighting. Bianca is just mad that Kamani was telling tales out of school, but I don't know if that is the best tack to take right now. I don't think Larry is at all stupid.

Bianca confronts Kamani immediately; don't you say "good morning" and "nice sunglasses" to her!! Bianca's tone is too strident for Kamani, who tells her twice to take it down a notch but yeah, she saw a hand on Bianca's bum that wasn't her good friend Larry's. She didn't come tell Bianca because they don't know each other like that. That's fine with Bianca (fine never means fine); let's just keep it that way then!

She's getting awful mad about this situation, isn't she? Larry said that too. However; I think she's attached to Larry like a lamphrey eel, I don't see her looking for trade on the side. On camera no less. She wasn't in a "blackout" like Emily.

Kamani takes her leave but comes back when she hears Bianca beaking to Malaku: she can talk to him but not Kamani? Number One: Kamani saw the bumgrab with her own eyes, so it wasn't a backstab. She didn't make it up.

It might sound silly that we're debating the few millimeters of difference between back and crack, but this could affect Bianca's chance to dig gold and she is not having it. I'M KIDDING! Kamani calls Bianca a little girl and walks away.

Malaku is watching this all in disbelief; he tells Bianca that they need to have a real conversation, right? Coz that's not at all what that was. Bianca is still trying to control the narrative and Kamani sticking to her guns as to what she saw does not work for her.

Larry sees Kamani stalking away and asks what's up then moves to the kitchen when Bianca comes at HIM for coming at HER in front of everyone. If he had a problem, he should have pulled her aside instead of embarrassing her in front of everyone. Larry insists (one thousand times) that he kept it fun, he kept it light and he was on an elliptical! That elliptical came up two thousand times. I agree with both of them; Bianca was right in that it wasn't light or fun at all, but I've had people in my life previously where EVERYTHING had to be brought up in public. If there wasn't a public airing of all things important, she would twist and manipulate perception so much that any original message would be lost and whatever suited her best would stand. I think Bianca might have preferred a chance to defuse that on her own and that's what she's annoyed about.

Back at the house Agu and Kamani are noooooooot talking. Yeah, I think Ship Kamani has sailed, Agu. Larry tries to give a nice speech on the beach (but I'm distracted by the fact that his nipple piercing keeps switching sides); Emily thinks they're going to be lifelong friends after this!

Larry's not down with Bianca's energy shift, he's not doing this the whole vacation. He's "totally embarassed by it. And turned off."

He's mad now, eff this, he's out. She's mad at Kamani because no way she would allow some dude to have his hand on her bum and angry with Larry for how he approached her. She starts to cry in the car and Larry is DUN and we're out. Until next time!