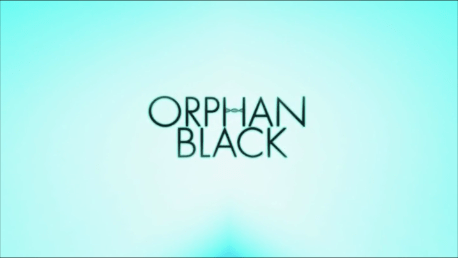 It's time for some Clone Clubbin', y'all! Who's up for starting the second season of Orphan Black with me? Awesome! Rolling S2:E1 Nature Under Restraint and Vexed after the break

I can't even explain what happened before this in sentence form; go check out the recaps! I may, er, have had to...it's been a little while.

We open with Sarah Manning (Tatiana Maslany) running, running running after finding her daughter Kira (Skyler Wexler) and guardian Mrs. S (Maria Doyle Kennedy) missing, stopping to call her brother Felix (Jordan Gavaris) who isn't picking up. NOBODY's picking up, the other clones numbers aren't even working. She leaves a message for (sorta?) boyfriend Paul (Dylan Bruce) and gets a free cuppa from the owner of the Bus Station Family Restaurant (worst fake name ever).

Paul's phone calls back, but really, it's Rachel (Tatiana Maslany) and she'll be happy to accept Sarah's surrender and keep Kira and Mrs. S safe in return.

Two guys burst in just then, suspiciously dry given the rainstorm outside. One looks like Chris Isaak and insists on only free-range eggs while the other wee one scopes out Sarah.They approach and disarm her, but the diner cook isn't letting any of that go down in his place. He pulls a shotgun on the lads but ends up shot when Sarah hesitates when ShortStuff mentions Kira. That means Fake-Isaak gets shot and Sarah has a chance to run in the ensuing chaos. 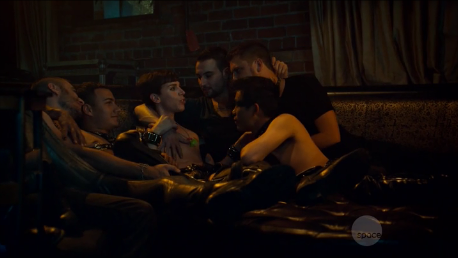 But he's high as a kite in assless chaps and he'd rather carry on with his fivesome if she doesn't mind, fanks. But she does mind, she needs help! He points out some implausibilities; why is her phone still working when everyone else's has been disconnected? They must be tracking her through it; Paul calls then to confirm. She's gonna have to meet with him, there aren't any moves left.

He's being watched by another guy who suggests he help Sarah one more time; so he can put a bullet through Paul's head. So touchy, these Leekies.

Cosima (Tatiana Maslany) is having her blood drawn by Delphine (Evelyne Brochu) but she refuses to release it to Dr. Aldous Leekie (Max Headroom!!) before she can do her own research: her biology, her choice.

Felix freaks out Alison Hendrix (Tatiana Maslany) in Scarberia next, they need a gun and everyone knows Scarborough is the place to go for WMD. She doesn't wanna lend her guns to Sarah and Felix, they're registered (Canada) and besides: she's cleaning up her life. No more drinking or Mother's Little Helpers, she's in a musical! It better not be Cats, warns Felix.

Does anyone else think it's a searing indictment of the way women are expected to perform as mothers and wives if it was normal to be drugged off your arse by 10 am on a Tuesday?

Donnie (Kristian Bruun) interrupts (in gross black ginch) to ask who she's talking to? Since we know he's her monitor, we're super glad she plays it off as running lines for the musical. At 4 am.

But she knows a gun dealer named Ramon who can get them an unregistered piece! ENTHUSIAST, my bad. It's one of my favourite things, when they do reality checks on shows like this. There was a Kevin Costner movie a little while ago that I was conned into watching (LOATHE Kevin Costner movies) that showed exactly how hard it would be for the average Mr. or Mrs. Law Abiding Citizen to get a gun, fake ID, burner phones, etc. It's given zero time in most shows, just assumed it's easy peasy, but think about it: how would you do that? Do you know a gun enthusiast named Ramon? Me either!

Sarah's arranged for a phone exchange so she can talk to Paul without being heard; there isn't much time but he's able to tell her that Rachel will be at the Dyad tonight (with Cosima and Delphine!) and that Rachel's watchdog that wanted to kill him is Daniel (Matthew Bennett). Daniel is right at the moment rolling up on Sarah, who switches out with a sk8ter chick who passes on her message of "up yours." Daniel is giving me Hugo Weaving in the Matrix realness and he is not happy.

Sarah borrows a phone from a fresh kid on the bus (NO YOU CAN'T TOUCH HER BOOB), to tell Cosima she's going to the Dyad tonight to get Rachel. Alison's getting the gun, wow, Ramon does not look anything like I expected. He looks 12, weighs a buck-five and works at a thinly-veiled WalMart in customer service.

Ahhh, he's her drug dealer, he's got it all in a tackle box and all the guns she could need. "Is that a Lady Grip?" made me laugh but she's sold and on her way.

While Cosima works on her research with her lab buddy, Delphine hands off her lover's blood sample to Dr. Leekie. She's worried that Cosima is showing the same respiratory symptoms that Katja was; she's invested, just as he wanted.

Art (Kevin Hanchard) comes in to catch Alison in rehearsal at the Glendale Community Theatre; that was extended for no reason I could see. Detective DeAngelis (Inga Cadranel) is waiting outside; Alison is in a musical? "At least it's not Cats" SHOULD be the tagline of the show.

They're perfectly timed to grab Sarah walking up to see Alison, now she's in their custody and not Rachel's, so...win?

Rachel and Paul are at Dr. Leekie's office, she'll need it tonight to host the Koreas. Both of them. And Paul will be coming to Taiwan with her the following day; it seems he's the only one who knows how to reach Sarah. Dr. Leekie does an impromptu speech comparing himself to God, but, like, better

Art and Ang stop by the crime scene at the diner; Ang goes in to find out what's shaking and Sarah appeals to Art: they have her daughter. Art wants to play everything by the book, but Sarah knows the people she's up against are too powerful. They have to let her go, though, they've got nothing to tie her to the double murder and Ang is NOT HAPPY.

Woo hoo Clone party at Felix's place! Ramon is bringing the flowers from Alison! WHAT'S WRONG WITH GERBERA DAISIES, FELIX?? Besides, it's what's inside that counts.

Lookit how trippy this is; sometimes I forget these are all the same person 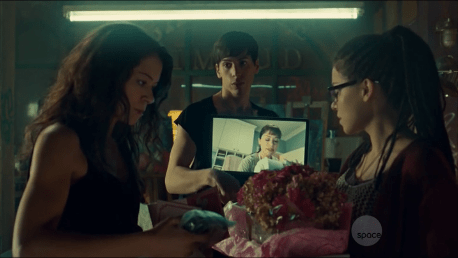 Alison doesn't want to know anything about Sarah's plan to get next to Rachel, she needs plausible deniability! Just as well, Sarah doesn't think she's gonna like it.

Alison is approached by two men as she's unloading her minivan; she's not going easy!

I know I shouldn't have laughed at that, but Tatiana Maslany does physical comedy so well, usually in the role of Alison. Daniel apologizes and lets her go when he realises she's not Sarah, she just looks that way.

Oh I see, now we've got Sarah dressed as Cosima at the Dyad party and hay, there's Delphine!

Dr. Leekie approacheth and that's when Delphine figures out that something is up. Not only does Cosima not verbally spar with the good doctor as usual; she hugs him so she can steal his access card.

Delphine confronts Sarah after, Cosima doesn't know anything about this and she won't it Sarah doesn't get caught. Now where is Rachel? Check Dr. Leekie's office! All the Koreas are coming!

Dr. Leekie gives a speech while Sarah watches Rachel pitching; they're selling synthetic DNA of course. Sarah waits for her moment and when Rachel is alone...

But of course Rachel has been waiting for her. She swears she doesn't have Kira either, they were gone when her people got there but she figured she's use it anyway. Sarah's done with niceties and takes Rachel down, hard.

Paul interrupts before she can find out where Kira is; he orders her to put the gun down so she hits him.

Made me laugh; you know people think he's pretty, Sarah! He lets her go, he'll make up a story, just run, Sarah!

She runs straight to Art, who already knew it wasn't Rachel who had Kira and Mrs. S. It's Helena's gang. Helena (Tatiana Maslany) herself isn't looking all that great; covered and blood and barely able to walk. She's in a hospital, thankfully, passing out after saying "my sestra shot me." ShortStuff from the diner is there too, he even has a fish belt-buckle so we know he's part of that religious sect.

We're out to Kira being roughly prepped for a video; you be careful with her!

I do quite like this show; it's good at balancing a bit of funny (it better not be CATS) in with the murdery and philosophical bits. And of course Tatiana Masany is magic at creating a host of fully defined characters, I'm even glad Helena is still with us. Until next time!