Hi guys and welcome back to The Magicians where it's been a minute, hasn't it? Last we saw, the gang was robbing a magikal bank with a swarm of bees (which was OSSUM) to get money to pay for Julia's otherwordly god-bortion. I'm sorry, I don't know what else to call it! Eliot also got hurt in the process, let's find out how he's doing. Rolling Word As Bond after the break.

They managed to get the demon out of Julia (Stella Maeve), but in the process, they nicked her soul as well. Who would think these guys might not be the best surgeons ever?

Best bitch Kady (Jade Tailor) stands watch over Julia while Quentin (Jason Ralph) checks in; nobody knows how long it will take Julia to get better or if she will.

Which is why Julia singing down the stairs in the morning is so weird; does she feel okay? She does, why you looking at her like she's crazy, Kady? "Well...are you?" made me laugh.

Kady's been working on Reynard research; gods like Reynard the Fox (Mackenzie Astin) have been raping and killing with impunity for millennia so communities would work on spells that could kill them. So far all the god-killing spells failed, but that just means they're due, right?!

They decide finding Reynard's son by Dana is the best plan of action; demigods have a lot of power in their own right and might be the trick to making a god-killing spell that works.

Quentin is busy going over the paperwork for his Word as Bond with Alice (Olivia Taylor Dudley), who's been living literally on his back for the last while. He bargained away an hour a day of her in the driver's seat in exchange for saving Penny (Arjun Gupta)'s life in the vault.

He really does not want to let her drive. Midnight it's her turn!

He's at Fillory now, checking on the other patient, Eliot Waugh (Hale Appleman - isn't that the awesome-est name ever??), Margo (Summer Bishil) isn't exactly spoiled in her role as the High Queen of Fillory. What with Eliot being hurt, the magic brownouts from the shatting in the wellspring; the impending war, it's a real mess.

Aww, she sends Q back to Brakebills because she knows that's where his head and heart are; with Julia. What she learned from Eliot's being hurt is to seize every moment with friends. She even gives him the enchanted button that they dug out of a murdered child's clothing so he can go back faster.

Julia's got a baby to track down, though, she doesn't think Reynard's interested in her any more, pfft, let's go find a way to kill him!

Reynard is waiting for her as soon as she pops out of the wards; she's not the least worried. That shade amputation is fantastic! He can smell Quentin, too, this made me laugh because of course Q thinks if he can't see Reynard that goes both ways!

Then Q grabs Julie and drags her back to Fillory with the button just in time. Julia is gonna stay with Margo.

Who is dealing with the impending war against Loria (of the Cock Barrens!), who are allied with the Intelligent Trees of the One Way Forest. Margo suggests they cut the trees down, Julia has a better plan. In the books, Jane Chatwin mentioned a dryad spokestree for the forest, she offers to help Margo negotiate. I think she's gonna make a run for it, but Margo doesn't have much choice.

Alice has been working on reversing her Niffin-ation, of COURSE, what else would she be doing, Quentin? There are some monks and a shifty Niffin that she's been researching.

Penny's at the Library looking for more stuff for Mayakovsky, The Librarian (Mageina Tovah) is surprised to hear of their alliance, but it's the only way Penny can get his hands to work properly again. Or is it? She offers him the assistance of the Order of Librarians, they're very powerful magicians as well. With a completely insane contract, who would sign up for unlimited physical and manual labour for at least one million years??

Quentin and Kady keep working the research on Dana's baby; they keep running into dead ends. Penny can sense immediately that there's an extra presence with Q

A leaky ahole is never good.

Penny and Kady have a stupid fight after that comes out of NOWHERE; they're still so prickly around each other that I can't figure out what's gonna happen.

Margo and Julia are off to meet the Dryad (Greg Damon) who..isn't female? That's weird. He also considers it an insult that only two females have been sent to negotiate; it's been noted. Pretty arrogant for a guy with moss growing on his face.

Quentin knows there is something Alice knows that can help them, if he could just remember what it is...Alice negotiates for an extra hour of bodytime and settled for 30 minutes while Penny and Kady try to figure out what the FARK Quentin is doing.

Margo begs a comatose Eliot to return to consciousness; she can't stop this war without him.

The tool Alice remembered shows the past in one of those clicky picture thingies we all had in childhood; you know that ones! But there's a problem, when they can see the baby, but they can't see who took it. 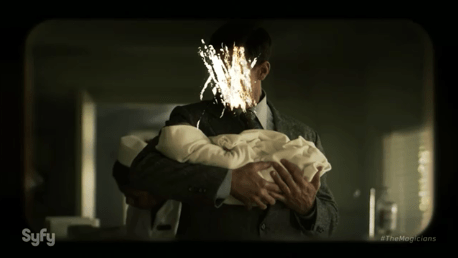 Looks like Martin Chatwin's suit, though. OR!!! Christopher Plover! And Martin is the adopted demigod and I think I just swallowed my own tail.

Now we know why Julia wanted to come talk to the Dryad with Margo, she wanted to snatch the Lorian dude who created the illusion that they'd left! She makes him give her an invisibility spell powerful enough to fool a god and when he snarks about her loyalty she reminds him, and us: her only loyalty is to herself. Always has been, always will be. Cool spell, bro!

As a parting gesture, she gives a box to the Dryad as peace offering, then walks away as the forest burns. Gurl

Alice has tracked down The Anglerbeast (Bracken Hanke) in the park to ask about Friar Joseph from the spell books she was looking at while in control of Q's body. The Anglerbeast looks like a seven year old girl and "in the parlance of your time? F*ck you, pay me."

She'll need fresh meat to pay off the little girl, "newborns are the sweetest" but Alice doesn't have time for such niceties. Time is short so instead, she researched The Anglerbeast's weaknesses. "And you believe what you read? That was stupid."

Quentin wakes up next to the little girl with a dagger buried in her chest, thanks to Alice and her

They should run, now.

Margo is furious that Julia undermined her diplomatic plan to end the war, trees all over Fillory are in revolt! Julia's "those trees were dicks" made me laugh, but Margo is still mad. Long story short: Julia's sent to the dungeon.

Quentin's researching breaking his word is bond; there's nothing in the library! He feels like a failure, he just wants to help someone! And get rid of Alice, who's being a total tree dick.

Penny finds Kady getting angrily schwasted; I don't think you're supposed to use methadone as a chaser, K. It gives Penny a turn as the optimist, what the hell happened there? Does he like her sweater or something?

Alice didn't have enough time to deal with Friar Joseph herself (Jamie Harris), so she summoned him and made Quentin think it was his idea to go back. Friar Joseph is not great with animals

But he can see Alice, which nobody else has been able to do. Friar Joseph is also the only Niffin to ever escape being boxed and she wants him to teach her.

Friar Joseph isn't teaching anyone who can't even get out of QUENTIN; if she can find a way THEN come find him and he'll teach her some stuff, but until then: she betta werq

Margo tries to console Fenn (Bruttany Curran) who is pregnant and about to have her kingdom plunged into war, she's gonna fix this, you watch. Eliot murmurs his support from the bed, he's awake! And alive!

Penny gave up watching Kady give up and went back to The Librarian to sign that ridiculous contract to help her and Julia find the demigod. Awwwww!

Quentin interrupts, coming in with blood dripping down his face, Kady probes but he won't answer, so she knocks him the f*ck out. Because they're the closest things he has to friends. Also so Penny can intercept him.

Penny sees Alice immediately; then she's trying to kill him and we're out.

I'm soooo over Alice as a mean NIffin, can we help her get out of Quentin in any way? A GoFundMe? Strongly worded email? Until next time!