And we're back in the Mediterranean with Below Deck Med! And so is YOU KNOW WHO and once he IS back, you know I'll calm down, right? Okay, maybe not, but I'll be weird in a completely different way, deal? Wooo! Let's roll Below Deck Mediterranean S4:E13 It's Ben A Long Time after the break!

We left with homesick deckhand Colin Macy O'Toole about to have a very unfortunate conversation with Captain Sandy Yawn. He's about to throw himself on the sword of chivalry and give his job to the new third stewardess June Foster who's just been made redundant because LOOK. IT'S VERY COMPLICATED. Let's just see how this plays out, whether Captain Sandy will accept his resignation.

He just about cries all the way through trying to resign, and she appreciates his compassion and big heart. BUT.

He agrees to stay with tears in his eyes. Awww!

New/old third stew/former chef (IT'S VERY COMPLICATED) Anastasia Surmava and chief steward Hannah Ferrier are just excited to get back to work together, yay!

Bosun João Franco is ecstatic that he's not losing his experienced deckhand and mate, but he  plays it down a little so as not to be insensitive as June's leaving the boat.

Okay. June's been there for a minute and a half, which is much less than it's taking her to pack and Colin making her departure all about him was...whatever.

Hannah makes the necessary changes to the sleeping arrangements now that they're bringing on a male chef (woooooo!!!!!!!), moving Aesha in with her flirtpal, deckhand Jack Stirrup. Hannah figures she's either speeding along their relationship or dooming it. Either way, there are still cameras, you two!!

A tearful goodbye between June and Colin on the dock (staged much?), she's gone and everyone's happy that Colin isn't. Aesha's even happier to hear she's moving in with Jack, awww.

Chat pre-charter, woo! Jack didn't even realise that June's left already, he's hilarious. The accent helps, I don't know if slacker is as appealing in American.

Lead deckhand Travis Michalzik is bummed he's losing his bunkie, they built a relationship over that whole month!

Captain Sandy takes Ben around to meet everyone, of course Hannah blushes and laughs because she had a crush on him last time too.

I love Ben!!! He's been working all over, looking awesome. Hannah fills us in on her past with Ben, but she can't stop smiling and laughing. She likkkked him but he didn't like her, so.

Anastasia shows Ben around the kitchen then it's already time for the pre-Charter meeting wooo! Captain Sandy calls these guests high-maintenance, starting with Primary Laura Callabreese Kruger, "wine snob." Co-Primary is Samantha and six other ladies expect to be pleasantly soused for the duration of the trip. AND the best food, which makes Ben's face squinch.

Personally, I am just glad we have a trained chef again. Anastasia did an awesome job for someone not actually ready for the galley, but I felt as though we were all with her every step of the way, watching her slowly topple and it was EXHAUSTING.

Guest arrival time is 20 minutes out, Anastasia's been tapped to help Ben and then everyone's gotta get in whites! Jack and Aesha get ready together, naaawwwww. Ben's still trying to find everything in the galley, he's only had two hours to get ready so this will be a bit of a shitshow. 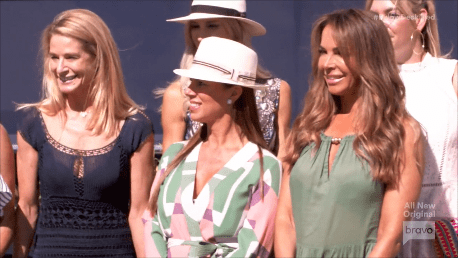 They're all so pretty!!

There are TWO SUVs backing in with their luggage. TWO. The deck crew struggles to unpack.

Colin is refocusing, he's ready to rock out the rest of this charter season! Ben's trying to figure out why none of the burners work, this is gonna be great. Lunch is in on hour!

Travis narrates a hilarious scene with João skipping over the rocks to release the bow line, I wish there was a way to include! That was awesome. "Here we see a native Zimbabwean..." The deck crew is doing very well at de-docking now, smooth as butter.

All the guests have a drink in one hand and their phones in the other, I just. They're filming each other filming the water. Who are they going to show it to?

They're also enjoying the view of the deckhands, Travis is a hottie! Wait until they see JACK!

Anastasia is loving being back as third stew, it's so easy! And she and Ben get the same tip but now she gets zero stress with that, woooo.

Ben's stretching it out in the kitchen.

While the guests do some kind of arse dance on deck. These are grown women talking about grinding against washing machines. Are these ladies from Sherwood Park?

Anastasia has another hour in the galley to get through, boooo she says. She was so happy in the laundry room! I am too, it's my happy foldy place.

One of the guests makes a move on Travis, she's Canadian (WAIT, FROM SHERWOOD PARK FOR REAL??) so they have an affinity. Uh huh.

Jack and Aesha are getting to third base in their shared bunk before he heads up on deck to titillate the ladies. They're all over him with super bad pickup lines, vowing that someone's making out with a crew member this trip.

The guests assemble for lunch but the deck crew is having trouble setting up the water toys. The water is loaded with jellyfish, there's no way they can let the guests go into that. Guuuurl, you don't think these ladies are going to actually get wet, do you? This is a sunbathing group fo sho.

The food is gorgeous and delicious. Ben sends out platters after platters of amazing grub; he likes to start off making a good impression. Then he heads up to be attacked in person, they're scarfing him down faster than his salmon sashimi. Is he single? Yeah he is!! WOOOOOOO

He tells us:"Listen ladies. I just got on. I'm not ready to get off!" hahaha

One of the guests dropped off some things for the stews to steam, Aesha's going on break so Anastasia says it's all good. We know from previews that it will not be all good.

Travis is settling in with Ben as his new roomie, it's fine, but it won't be the same as with Jack. They sleep naked? Or at least he does.

I was wrong, the ladies are into the water slide, wooo! But they can't because of the jellyfish so jetskis it is. These women are here to have all the fun!

Anastasia approaches the guest clothing of doom. She's only supposed to steam the co-primary's clothing but we watch her put it in the washing machine as we scream in horror.

She said this was EASY!!

Travis and the Canadian guest Natalie are getting along like a house afire, he has Canadian citizenship! For the record: super easy to get, they're practically giving them away. They ask if he skis, he's never been in snow!

Hannah and Jack go for their breaks, the latter cuddling up with Aesha and the former asking Anastasia to check on guests.

Now it's Colin's turn to be sexually harassed by the guests, guys do understand this is how a lot of women have to work, right? Carefully negotiating the innuendo and drifting hands while being nice to enough to get the expected tip but not so nice that you find yourself trapped in a corner under a drunk customer.

The guests decide to feed the fish some biodegradable golfballs and take pictures of Colin's butt while screaming about smashing balls. This is a girl's trip!

Aesha comes off her break to find out that Anastasia has washed the guests' fine clothing, she's immediately worried. This could be a problem. (We know it's going to be a problem)

Hahaha Travis is making me laugh so much this episode, he's so funny narrating the bachelorette party vibe these guests are giving off. "F*ck your ex, Jenny. F*ck him and that other wh*re that he ran away with. She's a little B*TCH." And then on and on until Colin and I are about crying.

The co-primary Samantha is also almost crying, but that's because her dress was ruined instead of being steamed. Jaysus. Anastasia's like, whatever, I washed it, who cares? This woman looks as though someone dropkicked her pursedog.

Captain Sandy is there to soothe things over, but makes a note to talk to Hannah about Anastasia getting her head back in the game.

Ben's having trouble with the burners on the stove, just as Anastasia was. He's edgy and passing that on to Hannah, who's remembering what it's like to work with a chef under stress. He was told 8:30 pm for dinner yet is still mixing a cake when the guests appear, hangry, at the table at 8:30.

The first course makes it out of the kitchen to the guests, who are comparing levels of horniness. Captain Sandy is roped into joining them for supper the following evening, Anastasia heads downstairs to do guest cabins. She rusty!

Travis helps clear plates at the table (either the guests loved Ben's tuna sashimi or they hated it), dodging questions about his nationality and status. Ben is bummed when he sees full plates come back to the galley, he'd rather the boat sink!

To be fair to the guests, that was two raw fish dishes in the last two meals. There was also a fresh quail egg on this tuna, so maybe it was just too much.

Travis asks how old everyone thinks Natalie is, she's really beautiful. They guess 40, but she looks 20. The guests are getting past tipsy into Speech Mode, which is about how men are bastards and they should just live together and a bunch don't have kids and

Ben's struggling keeping the risotto going, the burners just stop working randomly. He serves it up but the guests are too busy speechifying to try it, it goes cold.

Jack notices that the tender has wandered away in the night, to be returned to Captain Sandy by a stranger. Who did that? Or didn't do that, as in tie it up? Captain Sandy is all over Travis, who says they'll get to the bottom of it and we're out for this week! Have a great long weekend!