So. It's 2018 and we're in the middle of the catastrophic Malibu fires on The Hills: New Beginnings, do you remember the news coverage? I do, sort of, I didn't realise it was centralized in one main location like that. Right now on the show Brody Jenner is making a dangerous (and possibly illegal) last stand at his house, will it make any difference? We'll find out after the break!

I guess we're not talking about that yet, first we need to talk about the JustinBobby Triangle with Audrina Patridge and Stephanie Pratt. First off: there is no such threeway action here, Stephanie and Audrina could not be more different. This has to be a manufactured storyline and that's likely, I just hope that Audrina is well protected. She's so fragile! Her divorce has been awful and I like her so much more than I expected.

We did see Stephanie and JustinBobby walking off together after a night of partying in Las Vegas, though, so what the hell do I know?

Ah shite we open with scenes of destruction from the Malibu forest fires, it wiped out whole areas of property. It's all oddly white and ashy, not looking like the aftermath of any forest fire I've seen.1500 homes were destroyed in the fire, but Brody Jenner made it out alive.

He and his wife (the now estranged) Kaitlynn Carter survey the damage, the whole of Malibu burned.

Audrina and Mischa Barton (I know! The actress! But she's on the show now and it's weeeeird) can still smell the smoke in the air as they drive through Los Angeles discussing the "worst trip to Vegas ever in my life" as Audrina calls it.

Audrina is driving Mischa to her first audition in awhile, it's been a minute since she was reading for a part. Mischa is auditioning in front of Fern Champion and I have all the cringey hope for her. I think she nails it on the second take! Fingers crossed!

Brody's house is untouched, how is that possible? He keeps calling it his house, I don't know if it's his and Kaitlynn's or not, but I bet we'll find out now that they're divorcing. Even though maybe they weren't married. Apparently.

Their shed was demolished, burned right to the ground but Brody hosed down his house for hours and whether or not that helped, who knows?

Off we go to Spencer Pratt and Heidi Montag's house, where she and her adorable son Gunner are blowing bubbles with his nanny Abby. You can rag on Heidi all you want for having a nanny but she's a working mom and that's reality.t. if you're lucky. Spencer is in awe of her mom-skills.

They talk about Brody and the fire for a bit then segue into gossiping about the JustinBobby dramz before we learn about another revenue stream. Heidi always wanted to be a pop princess!

She took some time off after Gunner was born but now she wants to get back into it, now that there's some money to put in *coughPrattDaddyCrystalscough*. Also: you're big in the gay community and now you want to switch to the faith community...

Hai Whitney Port! She's having a party and Kaitlynn is there along with three other people I don't know. Is it a clothing party? There's a rack of stuff...Whitney is launching something, the three women are with Bundle and they're helping with the photo shoot. Does that mean Kaitlynn is the model? No. The ladies leave and it's time for Whitney and Kaitlynn to visit.

Did you know Whitney had a fashion line of her own? I didn't either! It was called Whitney Eve, she closed it down when her dad died and now works in marketing for Bundle Organics.

Like. I know it's sponsored, but you don't have to bend us over, MTV execs.

Bundle sells all kinds of lifestyle stuff to Moms, including moms-to-be, like fertility products for people like Kaitlynn.

(Girl, you're going to be so happy that did not work out at this moment in your life. A divorce, even from a fake marriage, is so much harder when you've got kiddos. You'll get yours when the planets align and you're actually committed. Or fertile. One or both of those)

Oh! It's Whitney who's the model and she's talking about her brand existence somethingsomething for an infomercial? For Bundle, course.

Mischa is nervous about her audition, it's the first one she hasn't gone on with her momager. She fired her three or four years ago, it was a blurry situation but thinking of her family as being permanently estranged is super hard.

Their pal Frankie Delgado is throwing a dinner party, Mischa might go but Audrina is ready to take a pass on more public drama with Justin Bobby for now.

Speaking of Justin, he's on his way to help Heidi with her music career. I always appreciate Justin's take on things, he watches Heidi play with her son and comes to a vastly different opinion than most. He thinks Heidi getting involved in music again might give Gunner a break from his mom.

It's so TRUE! We moms, especially us current/former stay-at-home-moms can sometimes get so wrapped up in our kids' lives that we forget that they have needs outside us and we them. Go play some guitar, Justin, you helped one person today!

So! Heidi was doing a pop thing before (#4 in Tokyo!) but now she's leaning towards a "heartfelt Christian vibe" and I'm confused. More Tammy Fake Bakker or like Amy Grant? I LOVED Amy Grant and I wasn't even a Christian!

One of the biggest things in Heidi's life lately has been like, being like you know a Christian. She and Justin review her lyrics, then there's singing and guitar playing and it's not bad!

Justin is so helpful and warm and focused and you can actually hear women taking off their underwear. That guy is sex on legs.

Spencer comes in and immediately demands that Justin start drinking with him, bro needs some time with some pals, amirite?

To talk about Las Vegas. With Stephanie Pratt!! What? She and Audrina get into it immediately, Stephanie does not understand why Audrina just doesn't believe her.

She's not quite so nice in person.

Wow, that was over in less than five minutes.

We have a little visit with Whitney's family. Awww, her hubs and kiddo are adorable. Whitney's going to Frankie's party so she calls Audrina to see what she's wearing, but she's not going, so...

Ohmigod. WHAT did I just say about product placements, MTV?? The extremely cheesy teeth whitening bit, honestly. I'm not going to be able to keep my head up during this particular walk of shame.

Frankie is having a party with...takeout containers? What? 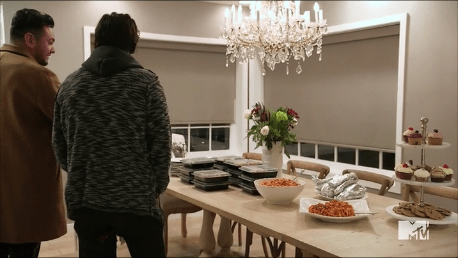 Why is he wearing a huge jacket? Why Can't I get a clear shot of his wife Jen? Who else is coming? Why is Frankie having a party? Why do I have so many questions??

Jason and Ashley Wahler arrive after Spencer and Heidi. Justin is braced by Spencer immediately as to whether or not he is hooking up with Stephanie.

Heidi explains her pre-sleep routine with her son, girl is working over and above.

Brody and Kaitlynn are not in attendance; Spencer gives him a firefighter pass. This one time. Then we're back to the Justin drama with him actually saying that Audrina was trying to hook up with him in Vegas. Mischa is all over that, she says there is no way, she was there.

What kind of creep

What kind of creep says that in front of friends about someone he used to date / wants to date? Calling her desperate like that is just. Such a dick move.

Justin wants the argument to die, can't this be over? CAN'T IT?? Not when he's showing off how many times Audrina called him the night they were in Vegas. Man, I am seriously starting to dislike this guy.

I am impressed with Mischa, though, she did a great job of calling Justin out on his shite. Audrina also called her a bunch of times at the same time, so don't go using it as proof that Audrina was dying to ride your pony, Justin.

Whitney's known Stephanie since high school and her original cheekbones, she knows girl is attracted to drama. And men attached to drama. Whitney is always the quiet voice of reason, usually in the form of a gentle joke and I'm making her sound lame, but she's not! Just human and grounded and unlike most of this high octane gang.

We're at the Road to Seoul BBQ with Audrina meeting Justin, honestly, what. There's a wariness and tension between then that's not usually there, but he still looks happy to see her.

Can they be friends? No. An excruciating argument follows wherein he calls her out on all her shite, publicly and to humiliate her and it's all over. Aw man.  It's hard to let go of someone you cared about.