Welcome back to Danish Week on the Great British Bake Off! And by that I mean Danish.Week. What the Sam Hill does DANISH WEEK mean? We're making flaky pastries all week long? Or celebrating Danes all week? Are we baking strictly Danish recipes? WHAT'S GOING ON?? And why has it been almost a year since my last recap? Never mind, doesn't matter, on we go into GBBO S9 E08 Danish Week!

Last time (about a year ago, give or take, so I'll refresh your memory) we had our first ever Vegan Week, won handily by our Kim-Joy and her fancy foxy cake. This competition seems to be between her and Rahul Mandal, I've got my eye on those two...

We lost Jon Jenkins last week, I'll miss his bright shirts and mooning on about his daughters. I love people who love their families, I could squeeze mine to bits. Then sit on the bits making crooning noises and if you didn't know who I was when you started the recap, you do now and that counts as fair warning.

We open with hosts Sandi Toksvig (who is Danish! and a short, burly Viking today) and Noel Fielding (currently a striking tall blonde Danish girl) telling awful jokes on a bridge.

There are only 5 bakers left! Awww and they're all wearing Hawaiian shirts in Jon's memory! I legit teared up, that is super sweet. Briony Williams is all pumped up and ready to roll, let's bake this day woooo!! Manon Lagreve (Of the Spring - no, I will not ever be able to say or think her name without adding that, you're welcome) has her eye on who she thinks is her main competition: Kim-Joy.

I couldn't agree more, but watch that Rahul, too. He's a polite, self effacing baking MACHINE.

Rahul's not done any Danish baking, though, neither has fellow baker Ruby Bhogal, although she at least probably knows croissants are not Danish.

Are the hosts wearing? Handsome Paul Hollywood looks totally as usual, but other judge Prue Leith appears to have let Noel shop for her. I LOVE it! Gimme one, size large! 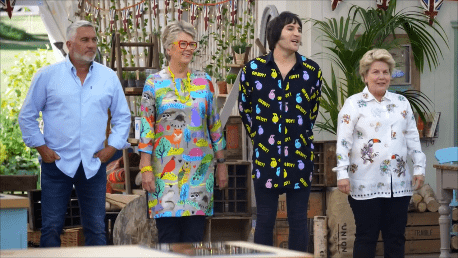 The first challenge is upon us! The bakers will be preparing a loaf of rye bread (is that Danish? I'll take two!) and making sandwiches from the baked loaf. Do they need to put weird stuff innit like wee, salty fish? Open sandwiches means no!

They have to make a dark rye that usually takes 24 hours but they only have 3.5. Hm. My bread recipe takes 4 hours on a good day, I guess if you throw in more yeast?

Manon and Briony make fun of Danish pronunciation while Paul explains what the bakers will be making, but I need subtitles, the dearth of which has left me in the dark. Prue explains that the key will be "beauty combined with simplicity."

We start our baker interviews with Rahul, who takes more than a full minute to explain his recipe and plan for his open sandwiches. That sounds completely opposite to "simplicity." (See above) 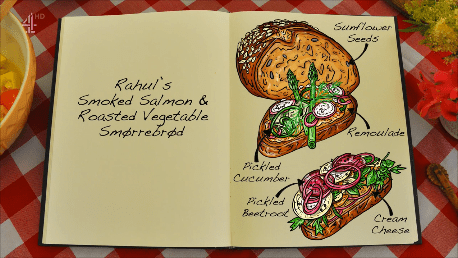 On to Ruby, whose bread is kind enough to show us the type of bread, allowing me to omit ever typing it even once. 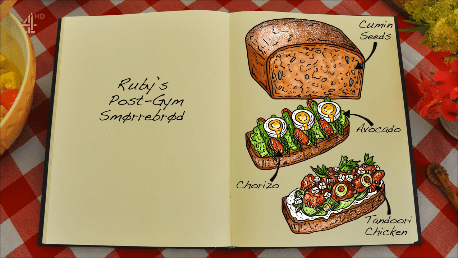 Paul tortures her by asking about her flour to water ratio, hmmmm he says while she panics. Should she use more water??? 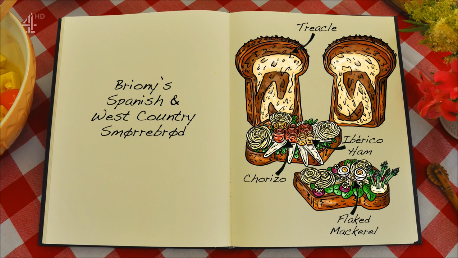 Bring on the tomato swan!

Manon is making a sweeter bread in a pot, Paul is concerned about raw dough but Manon's tested out her whatsit. 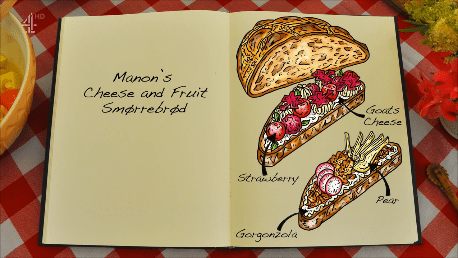 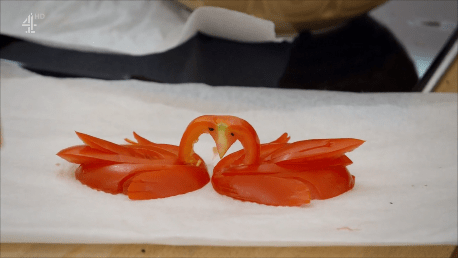 Noel entertains us with manufactured tales of Paul drawings unicorns in a tutu then we're over to Kim-Joy who is making hard boiled eggs as bumblebees because of course she is. 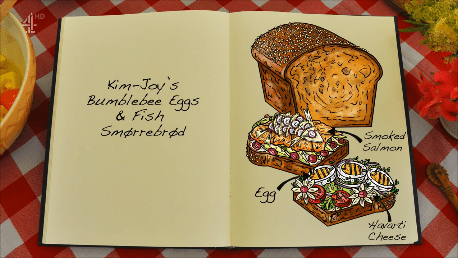 I luuuurve Havarti cheese! Any, all of it, any kind of Havarti, light, jalapeno, dill, anything. That's one of my very favouritte things to do when I'm in Toronto, to visit the little cheese shops in Kensington Market. They have halvah! My number one dessert ever. Sorry, where were we?

Rahul's bread did not rise, he put in too much rye. It needs longer, but one thing we do not have is longer, or faster for that matter.

Ruby's bread is not rising in the oven, it's a flat sad little loaf. Kim-Joy's is about bursting out of the pan, I love it! Almost as much as Manon's, which is gorgeous. Hold on, I think I'm hungry. Be right back.

Okay! I've had some chicken Kung Pao meatballs and I feel slightly more about to concentrate without drooling.

Due to the complexities of their loaves, Briony and Rahul had to leave their bread in for longer than they should, they'll have to cut it hot and that will make getting the required thin slice difficult.

Ohmy goodness, everything looks so GOOD! These are artists y'all, even if the to-mahto swan hits the floor. Er-ooh, there is no way you can call Briony's slice little, yikes. If giants had toast for tea, they'd be asking you to cut it down, love. 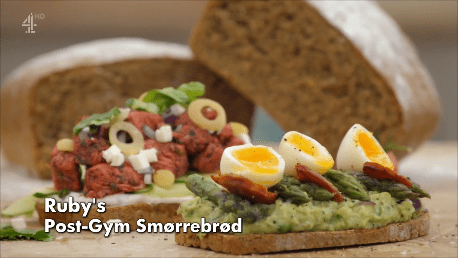 Her bread is great, just the right texture and her sandwiches do very well. A "real celebration of rye"

Manon's is so pretty!! 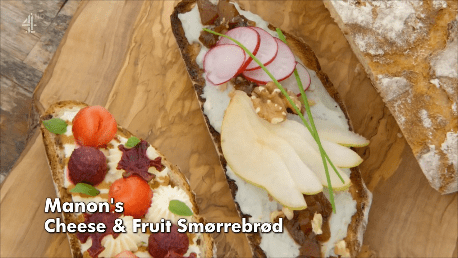 (Sorry, JS, I wanted to capture both and they kept moving!). It doesn't get rave taste reviews, but it's solid. 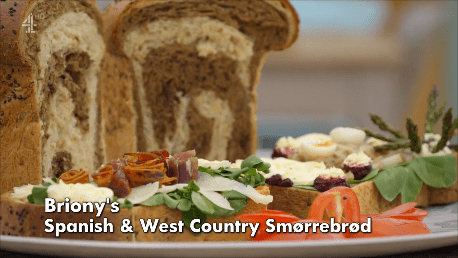 I don't care if it's huge, I would totally eat alllll of that. The judges hate everything.

Rahul fares no better with his "bit of a mess" undercooked "awful" bread that Paul doesn't even want to eat. 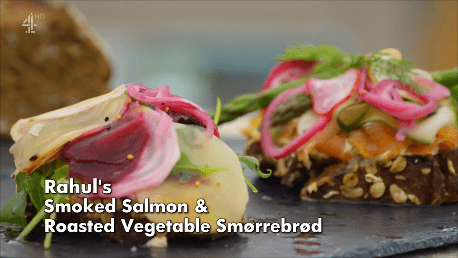 Regroup, fella, you got this! This was just not your challenge. Briony is also in tears after, you got this, lady! Don't let it get you down!

Technical Challenge time! All Paul would tell them is that they need to learn a new technique for this recipe, and fast. What??

The challenge is to make 14 Danish anjfbshvf. Everyone makes the same face as me. 1 hour! To make these asjkbkjdf and also jam? 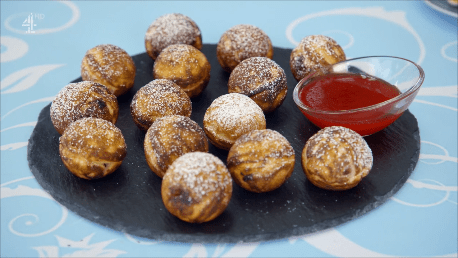 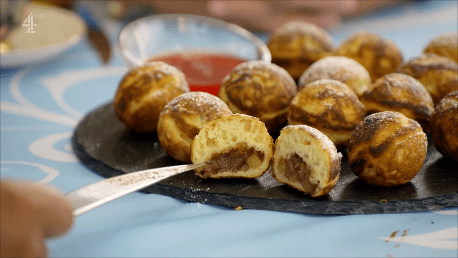 Manon is the only one in the room who's even seen this dessert, her sister dated a Danish guy.

Half an hour left!

The bakers are at the point they have to carefully rotate the ashjkfsdhu 90 degrees then fill with apple stuff, it's...not going well. I don't think Manon is going to have much of an advantage here. Ruby is stuck because you're supposed to put apple bits in the hole and she can't find it.

Rahul, in last place, then Manon (whoops), then Ruby for appearance then Kim-Joy and Briony wins! Yay! She needed that to get her confidence back after that disastrous Signature Challenge. 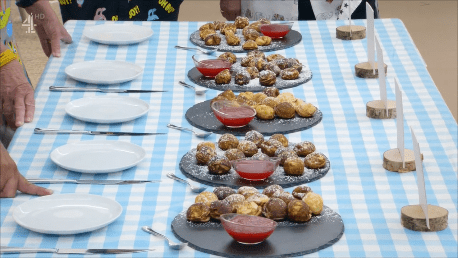 Host and judge chitchat, Noel and I want to know when there's Horror Week! First I thought he said whor - never mind.

It's anyone's game going into the Showstopper Finale, who's going on to the Quarter Finals? I hate to say it, but I think we're going to lose Manon. She started out strong but has been juuuuust missing the mark lately. It's between her and Briony for me, Ruby is a serious contender and we already know who the finalists are.

For the showstopper, the bakers have to make a child-shaped cake (like, for real) made out of flaky Danish pastries called a kagema or kaicooolIdon'tknow decorated with at least three confectionery items. That sounds horrifying.

The goal is Lamination, which makes Rahul almost right. It's a process used in making croissants and puff pastry, wherein cold butter is pounded into shape then rolled between layer after layer of pastry.

They only have four and a half hours, this can take days!

Briony is first up for her review, she'll be making a birthday cake for her nan. And we have a name, wooo! 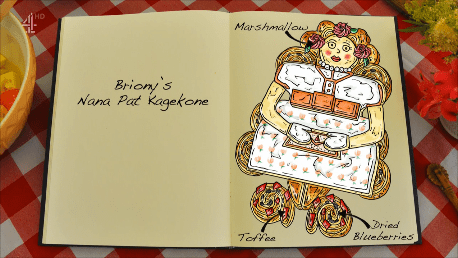 Ruby is making a cake for her sister, after being tortured again by Paul. He loves messing with her! 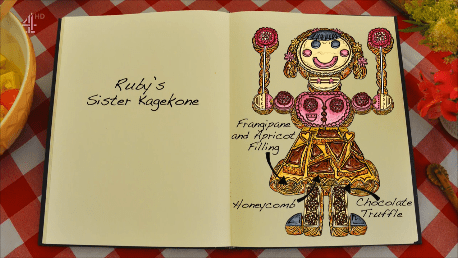 How can Rahul not have seen Star Wars???????? Noel tries to explain that Rahul is Luke Skywalker and he's Yoda but crickets. Lookit his cake, though! 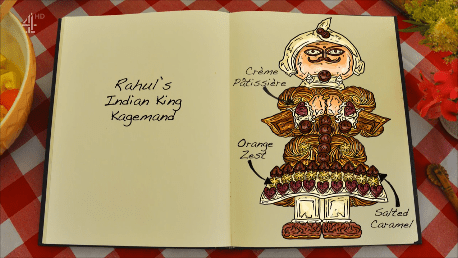 Paul and Prue are concerned that everyone is covering their beautiful Danish pastry with buttercream (really, Rahul?) and marzipan, let the pastry BE! 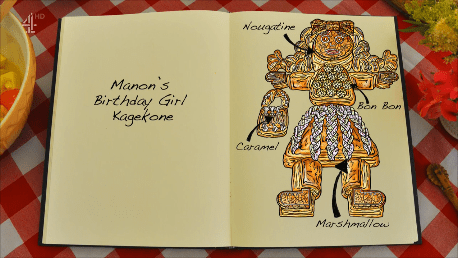 Paul picks at her use of Danish butter instead of French, it's not a go-to commercial choice. BUT. She's not baking commercially, Paul, she's baking for you, Prue, Noel and Sandi, who high fives her, damn straight.

Prue backs him up: this is not the time, Paul, she's already made her dough.

Everyone is panicky and rushy now, they're half out of time.

Kim-Joy is painting a super cool face on her sure-to-be well decorated cake. 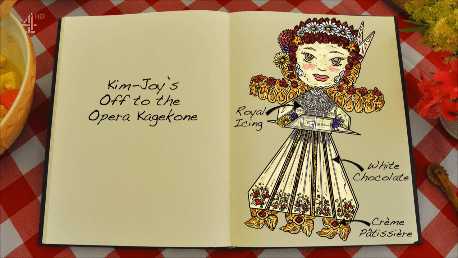 Even Noel succeeds in getting in Ruby's head, he tells her one of her truffles is too small so she makes them ALL small while he protests that she shouldn't listen to him! Amen.

So much pastry fluffing and shaping! Then the proofing, which is difficult to gauge. Kim-Joy chooses to bake after only a 15 minute proof, which the music and stares tells us is a risky choice.

So much butter leaking in everyone's ovens! I'm so glad I ate!

Oh noooo, Manon's looks far too dark. Briony's looks a little more tan that you'd want but Rahul's are straight up burnt. Manon doesn't cry, but she's close. Her cake is burned as well and unlike Rahul, she wasn't planning to cover all of her pastry with icing and confectionery. Her effort is pinned entirely on the now burned pastry.

Decorating time! Briony has this in the bag, you watch. Kim-Joy's is also fantastic and Ruby's somewhere in the middle as usual. 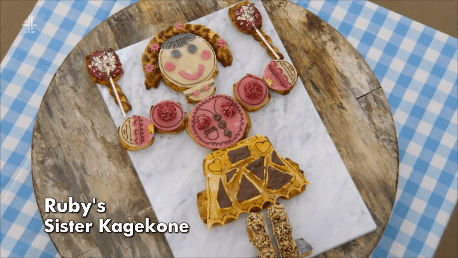 The pastry is great, all of her flavours are very nice and effective. 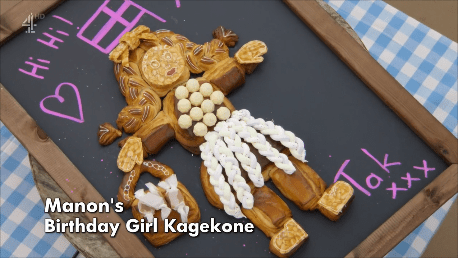 Paul does not like how little filling she has, the pastry is not good. Her oven was too hot.

It has a soggy bottom, she under-prooved. Booooo it looks gorgeous! Kim-Joy looks just like me when I'm trying not to cry in public and then exactly like me when I am crying in public but trying very hard to give the impression that it's not what I'm hearing is upsetting me, sometimes I just leak from the face.

Sandi walks her back and whispers words of encouragement while Kim-Joy tells everyone she's good now, just fine. 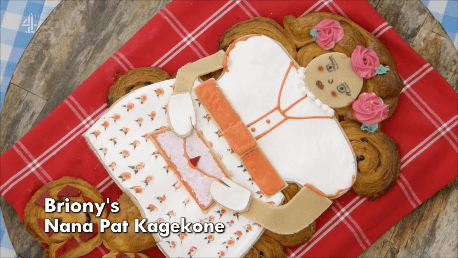 But the flavour is good, it's the closest to achieving Danish pastry thus far. Her sherbert makes his face squinch up in a hilarious way. 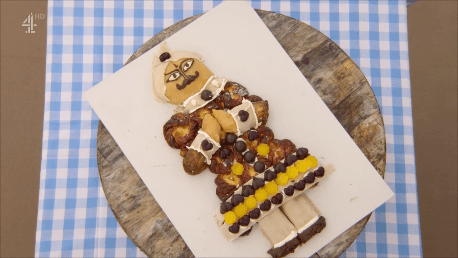 The pastry is all bad. The chocolates and marzipan is good, though!

It's been a long and disappointing day in the hot Bake Off tent, Manon is now crying, Rahul thinks he doesn't deserve to be here and Kim-Joy doesn't want to talk about it, okay? Only Briony did all right in the showstopper, so I shall now say goodbye in my head to Manon of the Spring, who is so lovely and talented. Star baker has to be Briony, she handled two difficult challenges very well.

And now we find out! Who was Star Baker this week? Ruby! Whoops, my bad, atta girl!

And leaving us is: Manon. Aww too bad, she's so talented and lovely. I hope her roommate who dresses exactly like her will cheer her up. In the meantime, Paul whispers nice things during goodbye and awww, they're all so nice on this show. I love it.

So we have Ruby, Kim-Joy, Rahul and Briony in the semi-finals for Patisserie Week! Wooo! Until next time, cheers!