We don't know why Captain Sandy is so mad but we do know sometimes she gets in her feelings.

She no longer trusts Malia.

Is that really about David's injury? David speaks to the chief (first?) officer to file an incident report.

The deck crew was outside washing down the deck, deck hand Lloyd Spencer heard his boss being yelled at and I wonder how that will affect him. He also gets in his feelings and is very, very conflict-averse. I love that he talks about it and he is the first to lead a deck team hug huddle with deckhand Mzi 'Zee' Dempers and Malia.

Everyone else inside is happy and relieved, chief steward Katie Flood finally managed to get steward Lexi Wilson fired, so it's just Katie and steward Courtney Veale in the interior to take care of our last two charters. Lexi was kind of lazy, but she wasn't doing nothing, I think this is going to be an issue for sure. If only Captain Sandy had fired Lexi two hours earlier, they could have kept recently departed steward Delaney Evans for laundry at the very least.

Chef Mat Shea is over the moon, he did nothing but fight with Lexi and complain about her, not necessarily in that order. Mat's anxious before charter as always, David reassures him that the food will be awesome as it has been all season so we know there will definitely be problems with the food.

There's only 90 minutes until our next charter, there's no time! I mean we just got provisions and everything's been super shouty. Lloyd's having a good time on deck with his crew, he and I are both worried about what will happen to him in the real world.

An hour later, Malia gets called back up to the Bridge, booooo, so Captain Sandy can yell at her some more. You know when you're still mad but you think you're under control enough to speak about it rationally and you realise you're even madder than you were in the first place? Yeah. Malia thought since the fall was off-hours, it didn't need to be reported but she apologizes for not letting the Captain know anyway.

Captain Sandy apologizes for yelling and for saying she didn't trust Malia, but they don't hug it out.

COVID rears it's ugly head; half of our charter guests won't be coming on board until negative test results are received.

*You know, I live in Canada, specifically in Alberta, or COVID Central these days. I can't even tell you what it's like out here because you already all know, don't you? Almost two years of this and even with testing and masks and vaccines, it feels like we're right back to square one, once again. I hope everyone is safe and healthy where you are.

Okay! Back to not reality/reality, who's coming on board? We've got gospel singer Anthony Evans and Chris Loar as primaries, Myca Loar, Andre Murillo and some other people.

These are some ATTRACTIVE people woooo! And all COVID-free, so the rest of the guests will be along in an hour.

Boat tour! Katie. You're dealing with religious people, it sounds bad to say 'big-ass Jacuzzi!" I have rationed myself to only say 'y'all need Jesus' once this whole episode, so pretend I didn't just say it there.

Mat works hard on lunch (salad is SPINNING!) while we stare at the Primary guest cabin and try to imagine what the real master cabin looks like when it's not covered in Bravo TV producers.

Zee is nervous to be on the bow by himself for de-docking, but David's not going to be a lot of help. He had good hustle getting those suitcases in, though, woooo! Wait. David is out back. Huh.

Aw Primary Anthony doesn't drink so orders a Shirley Temple. I love that! He's not going to get drunk and keep the stews up all night, he's going to be up early and enjoying the scenery and maybe I should calm down.

I don't understand why they're not waiting on the dock for the other guests, they were only one hour behind. It's also a gross de-docking, Captain Sandy comes extremely close to a concrete dolphin marker.

Other people in the charter drink, a couple of real cuties think the stews are hot, this might be fun! This group talked about adventure a lot, we're going to a remote beach right away to get that partic party started. But. The other three guests?

You may need Jesus.

The last three guests have shown up and I can stop worrying! Zee falls and we can't lose another person you guys!!

Omigod the picnic site is AMAZING. I can say that because I'm not the one schlepping gear up to the top of a mountain in Croatia.

Captain Sandy will be joining the guests for supper, Mat starts spinning again.

These people talk about God a lot and I don't even feel squicky about it.

This is a tough but beautiful picnic site, Malia returns to the Lady Michelle to grab all the help she can and then suddenly the guests are there and so is the food and it's delish!

The guests even feel grateful for the crew schlepping all this stuff up the mountain!

David almost fell overboard with his hurt leg and I cursed.

Awww, Courtney and Zee were having this adorable boatmance but she decided she just wanted to be friends, but like, for life. He wants much, much more.

I must point out that five minutes ago she was calling him "Daddy" and if I never hear that again: still too late. It's super awkward with just the two of them, though, so I don't know about BFFFL.

The guests wrap up their amazing picnic with selfies in the sun while the crew scrapes food into garbage bags and prepares to carry one million things DOWN the mountain. I love that juxtaposition, always.

Lloyd and Katie pretend to get married. 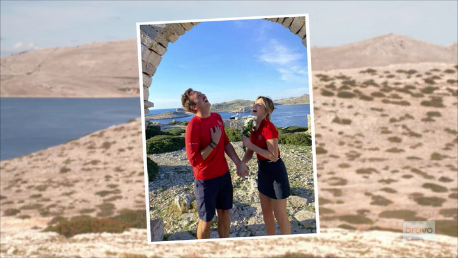 Why is David helping carry heavy things with this leg?

We get a time count, Katie and Courtney have been on shift for 9 hours without a break, although I swear I saw Courtney get half an hour in her bunk, so I dunno.

Wooooo it's water sports time and not even in the usual way! Two guests head off in jetskis, one's on the sea trampoline and I am lighting a small candle in a high window for the critter-free pool they had a few seasons back.

Malia gave very clear instructions to the two on jetskis; they had to stay at least 300 meters from shore. These guys went to town, right by the shore and yah: the police won't be far behind.

Captain Sandy sends Malia to round the jetskiers up, it's Primary Anthony and Primary Chris and they thought she said 'yards' not meters.

Everyone is on the slide and jumping off the boat, that looks like so much fun! If they were landing in a critter-free pool or something.

Mat...is needy. He needs a lot of feedback, he needs a lot of attention and he likes to talk about his menu and ask for input and he wants to chat with Katie who hasn't had any time off in about 10 hours now and needs to be pulling for dinner already. Figure it out, Mathew!

At least he's self-aware? He may need Jeebus.

Aww guest Ben has a crush on Katie, or at least wants to get to know her better so hangs around her while she sets up for supper. I bet it would be nice for the company, anyway.

The guests dress for dinner while ominous music plays and Courtney decorates the table with napkins, why is there ominous music??

Lloyd works on his resume, David's told him about an upcoming job and the boys are hoping to stick all together. I love that. It's the best thing about being young and being in a great team that gels.

Supper time! No tea, no shade but they're not very dressed up, are they? I mean, Captain Sandy shows up in a polyester jacket and not even her dress whites and she's still fancier than most.

I don't know why the music was so bad, everyone loves supper and it's delicious looking. And GONE. Except for Captain Sandy's plate, which had too much 'dark fish.' What does that even mean?? Is that like chicken? I didn't know there were different colours of fish to worry about?

Mat takes this as an opportunity to ask for more compliments.

It's an early night, as expected, but Courtney and Katie are working 16 hours without breaks. The next morning Zee works his first morning shift and forgets to put out toys. This is noticed by Captain Sandy, who sees a guest outside at 7:30 looking to drag out a paddleboard for herself. Whoops!

I LOVE that they're up early on their last day of charter and in the water already!

Mat works on breakfast while Lloyd finds out he didn't get the job with David.

If Mat says "what's the vibe??" one more time, Katie is going to hold him down and I'm going to punch him. You can't cook for compliments, Mat, be like Ben Robinson and act like you're doing them a favour.

Also? Katie? You bragging about how awesome you're doing with only two people makes Malia point out how she and her crew are picking up a bunch of slack, so maybe you should stop that too.

It's time to haul anchor and head back to dock already, Zee is off his game for sure. Everyone is off, Malia is walking the deck trying to get lines clean and fenders in the right spot.

Six minutes to change into whites and be ready for docking. This is going poorly all around. Now we get ominous music with energy! Like a horror movie with beats. Zee misses the dock with his throwing of rope while Captain Sandy tries not to hit ground lines and that's where we leave it for tonight!

Until next time (which will be in a few hours from now), thanks for reading! Cheers