Hahahahahaha did you guys see this episode title for Below Deck? BEMILY! I christened them Bemily AGES ago! It's like I can see the future! I seriously wish I could see the future right now. That would be boss. Rolling episode 12 after the break!

So we left Difficult Golem Dean Slover treading water by the buoys while Kelley jerked his own boatchain, will Captain Lee save the day and / or Kelley's job?

Dean's pissed and goes to take a shower, there will probably be no tip. In fact: do you think they'll ask for a refund for their Big Gay BoatTrip? Nico finally realises he's got the tender keys oooh.

Lookit the guests in nothing but their best Andrew Christian ginch??

Save Dean, of course, the Wallet never has to be in shape.

Captain Lee heads back to get Kelley; hey, look who shows up: NO, GUESS??!! Nico with the keys! Of course they can't reach the captain in time, so I'm sure he won't be mad to be setting off again in the power dinghy for NOTHING.

Captain Lee kicks Kelley out of the tender and makes him take the rib back (these boat names are so weird) while Dean bitches at Kate (and everyone else) about being stranded on the beach.

Supper time! Dean eats EVERYTHING and Kate keeps his cup full, so I'm sure things will rebound. Ben's messing around with Emily's flowers, SURE, do THAT on a charter that's already gone deeply, deeply south.

Come to Jeebus meeting with the captain! He'd LIKE to rip Kelley's f*cking head off, but there's no time. What he DOES do is make Nico Senior Deckhand and remember what happened with our last of those! He's taken some of Kelley's authority and given it to 23 year old Nico.

He tells Lauren right away, he is SO READY for this.

Kyle finds Kelley to explain that Ashley is on her way! She could be here at any moment! Kelley can't get past his most recent chastisement to listen, but Kyle reminds him: these guys weren't stuck in a New York subway getting peed on, they were in Virgin Gorda sipping champagne and coming back to a Michelin-starred chef (really??)

Dean has cancelled lunch, since he was ABANDONED ON THE BEACH (didja hear that happened?) so he just wants charcuterie (cold meats and cheeses!) and supper at 8:30. Ben asks if he can throw in a few extra items on the menu, you bet!

Ohhhhh noooo Ben you did NOT say that.

Kate and her creative blanket art has reached a new level, but I think she's barking up the wrong palm tree. She's created a double V formation on Dean's bed. 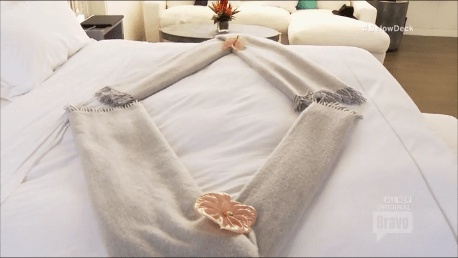 Oh Lauren wasn't even listening, she goes to Emily and says that Nico's been promoted to Bosun, and then it spreads all over the boat like wildfire.

Kate's lips are on point, yes?

While she makes fun of Ben scrambling to make up for his mistake with the shrimp the night before. I LOVE how we've gotten a slow-mo playback of the icing incident at least a half-dozen times, it's like art. Or whatever the opposite of art is.

Kate sends Emily down to get the menu from Ben so they can set the table properly, then mocks how many courses he's making. She's being weird about Bemily, amirite?

Kelley's come hat in hand to apologize for the beach messup (DID YOU KNOW DEAN WAS ABANDONED ON THE BEACH??) but lest you forget: Dean is a client of the Dance, Monkey, Dance variety, which means that he wants a singing apology from Kelley AND Nico.

Dean's so sunburned! I bet he was abandoned on a beach

Kate comes into the kitchen and finds Sierra and Emily playing around, how bout they go start the master? Oh no, she'd love to mess around like them, but they have these, what do you call them? Guests? That want stuff and HAHAHAHAHA. Nobody shades like Kate. She thinks they're taking advantage of her generosity and being "slackadasical" which is in no way a word. Obstensively.

Well this is unexpected, Nico is pissed that he has to take his shirt off and sing the I'm Sorry song with Kelley, he doesn't think he did anything wrong. Kyle is off to write the song, that street performer background just keeps paying off!

Ben lets everyone know in the kitchen; he messed up last night, so they need to be prepared for him to be a dick tonight. Fair warning! The guests are loving the tasting menu. So! much! food!

Wow, Kate is being a right B about Ben, hey?

I forgot they used to bang, maybe she just remembered too. She's disappointed that he's so hung up on the flowers and not as focused on work.

Song time! Dean likes it, but maybe just because Nico has "Big D" on his chest.

Kyle's SO EXCITED that Ashley's on the way! Lauren's excited to meet her first trans person but Kyle's just realising that he went on a date with Sierra and that Ashley probably won't like that.

During breakfast (no sloppy omelets or bitching about feeding this bunch!), Kate and Sierra have decided to switch up the folds on Dean's bed.

Ben fills Emily in on Nico's actual new role as Senior Deckhand (is he a hair model too? Coz he's got an adorable nose and looks like his eyes are at least pointing the same way), Kelley comes in and explains calmly. Then walks outside and absolutely loses his SHITE on Lauren about spreading false information. Whoa whoa whoa! Calm down, Beyonce! Oh man, then she runs to Nico and says that Kelley is pissed about Nico's promotion, NOT that she screwed up what it actually was. Lauren, I like you, but your toxic game of Telephone is about to blow this boat right out of the water.

Kyle asks for an early leave with his "friend" coming to visit, Skinny Kenny Rogers allows it, but no overnighters. That's a long way to fly for dinner.

Kate is LOSING it over these flowers, she's screaming now about them but Ben defends them, he want Emily to be able to enjoy them after charter, so he's going to keep them jammed in the walkin like a MORON.

I don't know, this seems like a pretty boring blanket fold 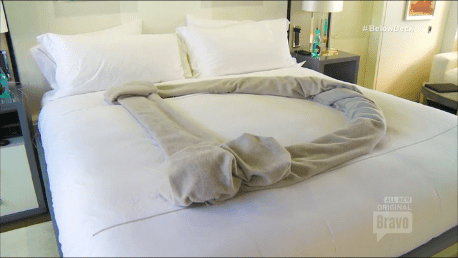 Lookit the guests in with the captain! 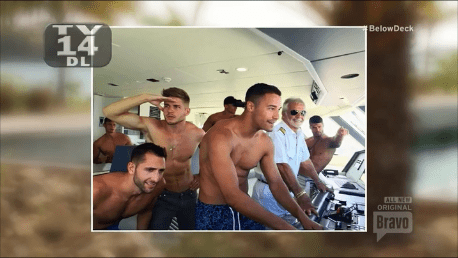 End of charter: I am not excited to see this tip, even from Big D. Ohhh, but there are TWO envelopes worth! Woot! I will revise to $5,000 in Canadian Tire money

That was the second to last charter, 24 hours to flip the boat and then it's showtime! I bet the last charter is going to be awesome.

Sierra and Emily are discussing Bemily; she doesn't want to date Ben seriously because of the Kate and Ben clashing in the kitchen.

Kate and Ashley visit while Ben asks Emily out on a date. She declines, she wants to maybe meet up with the crew. Ben's SHOCKED, shocked I tell you! It's just a formality, this asking business. He already has a place lined up! "Why the HELL would she want to spend time with anyone else?"

Holy, Kyle looks very different out on his date with Ashley! Lookit how cute he is!

Ben muses about the nature of bad relationship timing while annoyingly harassing Emily further in the laundry room about meeting him for a drink.

Kyle tries to explain about Sierra to Ashley: she does not understand. Full stop. You can actually see her blood pressure going up. IT WAS NOT A FREE PASS!! She recovers as Kyle decides that means she lurves him (eeeeh) and they're fine again.

Ashley has her appointment coming up right away; she needs Kyle to agree to stay with her. He doesn't answer right away, really? He's worried that she doesn't want to share that moment of her life with him, but agrees to be her Person. You called her the love of your life, why the Sam Hill are you hesitating?

Bemily is off to Maria's, Ben's seizing the moment! And we're out to them checking into a hotel together. Whut?