Hi guys, lookit, we're almost caught up with Project Runway! How did that happen? I don't know but let's not jinx it. We lost the Laugh that Walked Like a Designer last week, let's see what the challenge is this time!

So yep, we lost Jenni last time to a truly awful mismash of an outfit that her mom totally loved, so: silver lining? Wow, I didn't realise that Erin has been in the bottom the last four challenges, what? She won two out of the first three and then has tanked.

Nathalia is just glad she's still innit, even though she misses bestie Jenni. I will not miss Jenni's annoying farking laugh. Nathalia takes another swing at Erin's lack of versatility and that focus on another designer is exactly the sort of thing can pull you right out of a competition. Careful, Nat!

The designers get a weird air-y riddle-referenced letter, what's that mean? Ohhhhhh Tim Gunn rolls up with a suit in the Project Runway helicopter and Mah-Jing pees a little.

Me neither Mah-Jing! I technically have a fear of falling, which is supposedly different but means that I get panicky at the top of children's slides. I'm usually hiding underneath them anyway, thanks pale redhead skin!

This suit is Anne Fulenwider from Marie Claire, ooooh magazine spread challenge! She says Marie Claire is all about powerful women (ears are up, that's usually followed by shite, just ask Andi Zeisler in We Were Feminists Once) feeling strong and comfortable. Like a set of bamboo armor with cashmere lining? I look GREAT in green!

So they're having a power trip: an aerial tour of New York! Mah-Jing pees a little more

The look they have to create is editorial, so maybe a set of bamboo armor but not an EVERYDAY set of bamboo armor. Nathalia is looking forward to exploring her crazy side! Dexter has already won a Marie Claire challenge so he can't wait to repeat. Be an in-house designer and everything!

Mah-Jing's voice gets SO HIGH when he's scared! Erin's too, when she's talking about how cute the landing is (?).Roberi is feeling empowered over traffic (?) and if one of y'all do actually building shapes...I am not responsible for what happens. 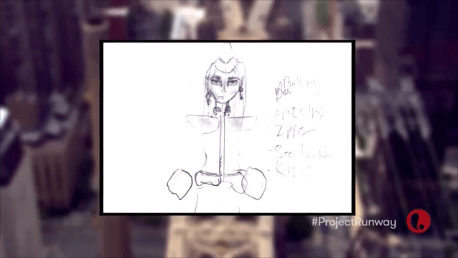 Cornelius doesn't have a design so much as a colour palette 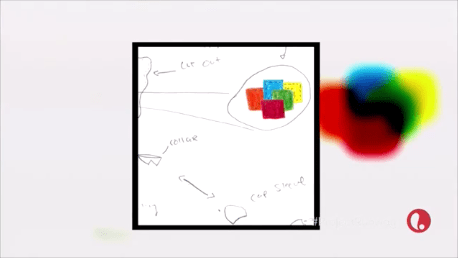 I like Mah-Jing's drawing but I don't like the dress if that makes sense. Looks Already Available. I'll have to see it in 3D! 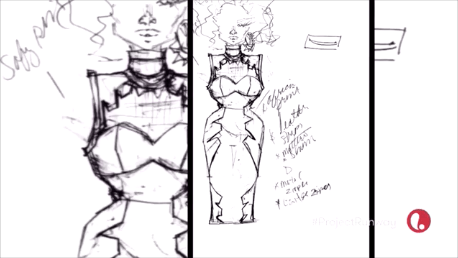 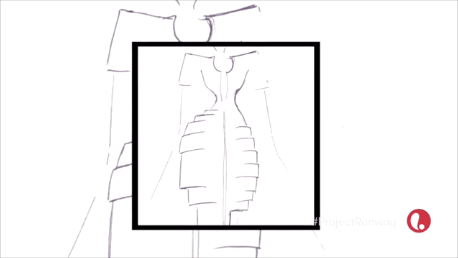 Mood Time! Erin WANTS to do yellow, but since she's already kinda done that (several times), she's pushing herself into almost-pink. Sure. Roberi's sticking to prints for his parachute dress but Nathalia's lost the fucking plot: neoprene and silver polyester? So amateur. Cornelius is freaking me out with his 7 colours of leather, what?

Tim's doing his TimTiques early, he wants to give the designtestants LOTS of time to completely revamp their ideas. Rik's doing something odd

But he's taking a risk! Erin is also taking a risk with her kooky starfish coat dress in almost-pink, I dunno. Rik's reads creative murder scene, Erin's looks like the costume on a children's show. One of the cuddlier ones.

Nathalia has this bizarre plan to make a jacket, THEN a jumpsuit if she has time. Roberi and I think she's lost it (see above).

Oohh, Mah-Jing thinks the problem is that Jenni isn't there to help Nathalia make those big decisions, and he's not the only one: Rik and Dexter sideye but help. Good thing the TimTiques are going to be early on.

Dexter whistles a lot while talking about his design; I think it's about vagina but I'm not positive, I've never heard one whistle.

Rik thinks this looks like the statue of liberty 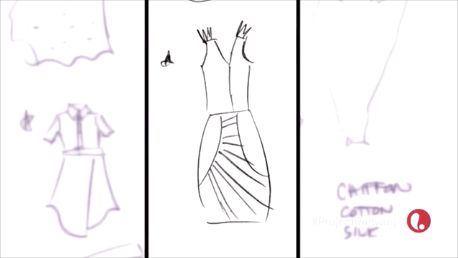 But Tim LOVES his fabric, he couldn't be more excited! Mah-Jing does something that looks like that at home, but slightly different in that it looks GOOD. Mah-Jing's tweed / denim combo is possibly a minefield of stretchy material, so focus on your own, fella.

Tim helps Cornelius quite a bit with his design, I love how Rik is willing to talk about his fellow designers, but he's just never shady. Don't get me wrong, I love a shady B, but it's nice to see the camaraderie that's developing and he seems to have a genuinely good heart.

Laurence's is black and tight but has a print, yay! Dexter is thinking of a superhero watching the city and Dexter IS editorial. Get to it!

Nathalia bought a craptonne of shite fabrics at Mood, Tim's worried that she's scattered and that her plan of a funky jacket plus plain jumpsuit is a risk on an editorial challenge. She has no time! She doesn't even have a design, how will she conceive and create two complicated pieces properly by 1 am? I'm only concerned that Tim counsels her to think about a jacket for the office and not a rainjacket and NEITHER sounds editorial to me.

Nathalia sounds maybe too young to have an exact grasp on what she wants to create. She needs a lot of direction and feedback. 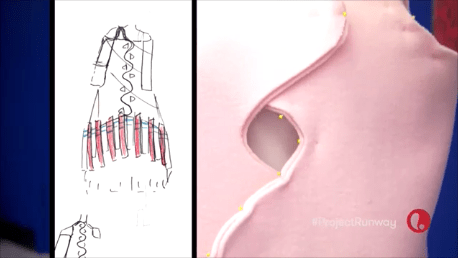 Which involves questioning whether powder pink gives Powerful (Elle Woods says heck yes!) and Rik interviewing that Erin's dress looks like Patrick from SpongeBob. We're not NOT on the same page! I do like how she pushes back on his question about the model's figure not being discernible: not everything has to be form-fitting on a woman. It's just. She calls it a "piglet dress" and that's perfect! Erin has no idea where to go from here.

Rik, I mean Nathalia has come up with a plan for the jumpsuit, honestly. I mean this in the best way, Nat: you might not be ready for this level of competition. I didn't realise how much Jenni was helping her. Interesting that she was the one saved out of the bottom last week when Jenni went home: two birds, one stone?

Erin is only seeing "bandaid, labia and piglet" in her dress, erp. She trashes her design 5 minutes before model fittings. Noooobody else has anything else ready either, except for Mah-Jing's stretchy tweed dress.

Dexter calls Rik's pattern a poop dress and he MIGHT have wanted to go with a slightly different shade, I'll give Dexter that.

Erin's starting all over, but it doesn't look editorial...I don't know WHAT Dexter is thinking with his, it looks like a black sheer curtain. That's IT. Roberi doesn't like how sexy his is and I sincerely love that about him. He doesn't rely on selling the sexuality of his models to sell clothes, he just makes awesome clothes. I want this look from the group challenge SO MUCH

Roberi, hit me up if you ever go into plus size, hunty! His dress looks completely different. Jeez, Rik goes and sleeps?? What? Dexter is making a similar jacket to the army one, I dunno. He's not wrong, though

Nathalia hates her look (it's awful - very rave robot) but she's inconsolable because she didn't follow her original vision. She's "literally spiraling into an abyss" but I'm watching her and I see no crack OR Ed Harris, so she might not know what "literally" means.

I love Runway Day music! It's so perky! Make it work time! I kind of like Cornelius's dress! And Rik's and it's time for model fittings! Dexter's looks like a sexy curtain, sure.

Last ten minutes! Rik is literally helping Nathalia sew her dress: that's what literally means, gurl, needle and thread. No abyss anywhere. Ermagahd, I could not hate Erin's dress more. It looks so STUPID. Don't tell my kids I used the S word.

Runway time!! Heidi looks great in a non-editorial LBD, can you believe we only have 8 designers left?? Heidi is scurred of helicopters just like Mah-Jing! That's nice.

The judges tonight are the usual: Nina Garcia, Zac Posen and Heidi, guest judges are Anne Fulenwider from Marie Claire (we met her earlier) and Camilla Belle and now I have all the Joe Jonas gossip running through my head!

Runway time! Dexter starts us off 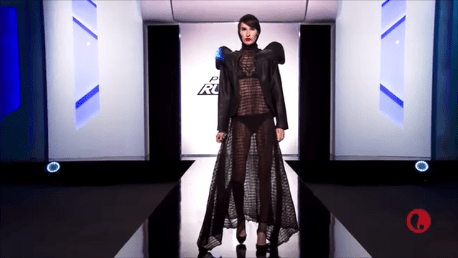 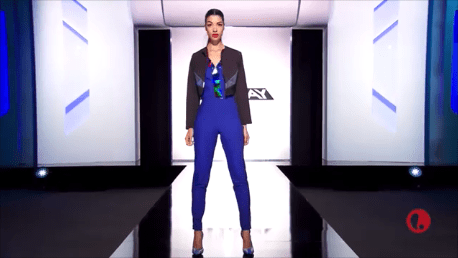 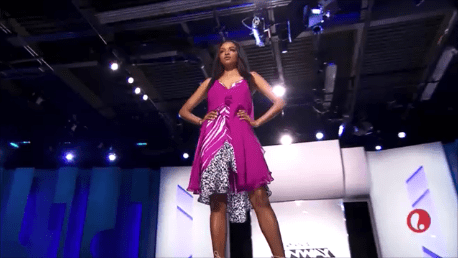 I like Cornelius's dress. I like the compartmentalization and pop of colour, fully dig. Is it too neutral, though? 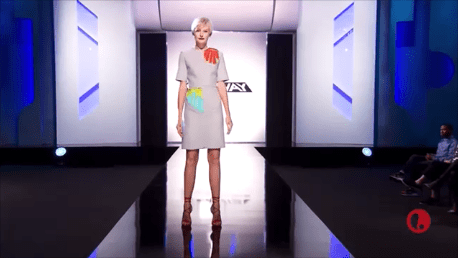 Laurence's is pretty but boring for an editorial look 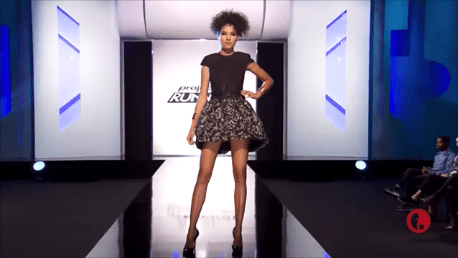 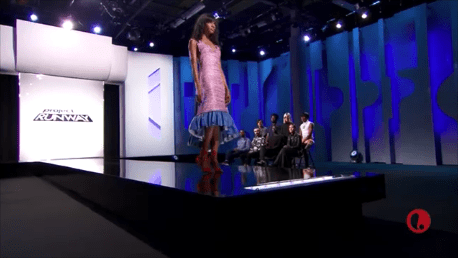 Speaking of, where's Rik's dress? There it is! 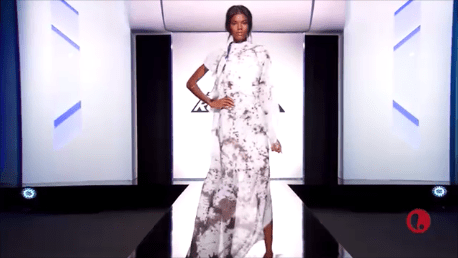 So flowy, so drapey

Judges critiques! Laurence and Roberi are moving on, everyone else is a Top of a Bottom.

Everyone liked it and Mah-Jing is shocked! I mean, he's happy, but so surprised. They also give the credit to his mama, but that's okay in my books. Anne Fulenwider likens it to armor and that's it! We've found our bamboo armor with cashmere underlay!

Nathalia: Heidi calls it "more Power..Ranger than a powerful woman" and sick burn, Heides! She's not known for it. Zac calls it "Star Trek meets Britney Spears" but the worst feedback is from Anne: it doesn't look like a fashion designer made it. Oooh. Sorry, Nat.

Erin: if she's a top...Heidi likes it. Anne likes it. Zac is intrigued. I want to throw up.

Rik: better be a top...Zac calls it fabulous from the front and shite from the back. Everyone thinks it looks uncompleted. Everyone except Anne Fulenwider: she LOVES it.

Cornelius: Zac loves the landscaping, it's Heidi's favourite and Zac sums it up: "risky placement of seams, well achieved." I know all Cornelius heard was Redemption Song. Nina even says she's happy Tim Gunn used his save and awwww.

Dexter: Anne loves his idea and inspiration but "Minnie Mouse meets Marilyn Manson." Nina calls him on the carpet for reusing his weird jacket idea, but he calls shenanigans on that, given how some designers are using the same look every week.

I think Dexter is fine; Nathalia is really the one in danger this week. I'm just sad for him that he didn't win the editorial challenge. That's all him.

The judges grope all the models and I am WORRIED for Dexter. The judges thought he made the lingerie; they were all horrified to find out that it belonged to the model.

The winner is: Cornelius, yay! He really needed that confidence boost, but really: I just love his dress. It looks so polished and professional and expensive.

Dexter cries while the judges rake them over the coals; Rik gets to stay. Why, why would they phrase it like that??

And going home is: Nathalia, which makes all the sense. You're just not ready, kiddo. You'll be back!

Ohhhh shite, they're sending Dexter home too!!!!! What??? Oh noooo. My wonderful font of positivism. Heidi doesn't mess around, either, he's still breaking down and she's auf weidersehen-ing him. She really hated that jacket.

Dexter is devastated, but glad he went out doing something he believed in. Nathalia is just happy she got this far. A quick camera cut to Cornelius made me realise how thing flipped, whew. And now there is no Tim Gunn Save out there. Goodbye Dexter and Nathalia, I will miss one of you a LOT. Until next time!