We're back already with Below Deck in Thailand, immediately after a spectacular blowup between a new crew member and a buncha other intoxicated crew members. It's so pretty in Thailand, why isn't every one just standing around looking at that instead of screaming at each other? Maybe it's the heat. Let's find out if there are annnnyyyyy redeeming qualities in the next group of charter guests, we getta new group coming right away! Rolling into Below Deck S7:E09 after the break.

So we've got new/returning deckhand Rhylee Gerber scrapping with chef Kevin Dobson as she asked him to include some Paleo options in the appetizer order he was placing. Literally that was it. And if she had maybe listed some specific items or he hadn't felt as though she was ordering him about, there would have been no issues.

However! Add in martinis Kevin was making!

And we have a rager. For whatever reason, bosun Ashton Pienaar jumped into the fray and yelled at Rhylee, who wasn't making anything easier on herself.

Unfortunately: he's her BOSS. You can't go off like that on someone who works under you, bruh. You just can't. Even after hours after multiple cocktails.

Second stewardess Simone Mashile sits with her crush deckhand Tanner Sterback and while she supports someone standing up to chef Kevin, even she's had enough.

Ashton is way out to lunch, he worked with Rhylee last season and has diagnosed her as having a problem with all the men of authority in her life. Erm. That's a fairly sweeping statement, Ash. Sometimes you can pigeonhole people based on your interactions with them without even knowing how you contribute to that view.

Tanner is literally the only person left at the table with Rhylee and he tries to smooth things over by mouthing supportive things but Rhylee's blood is up and she attacks him for literally no reason. Off she goes!

Kate returns to the table too, she thinks it's interesting that Tanner blames only Rhylee for the blowup. He cites all the calm dinners before as evidence, but Kate didn't think all the dinners were awesome. Kevin's been an arrogant loudmouth all along, as far as she's concerned, it's just that nobody called him on it.

The gang heads to the bar for more cocktails and shots, Kevin schwasted and loud. Kate tells Rhylee she has her back and if Rhylee would just say she's not there to make friends we'd be a quarter of the way to Reality Show Bingo!!

Tanner is so drunk he can barely stand up, I'm really hoping someone from Production is watching out for him because none of the crew have noticed. Oh here we go, we getta hear Tanner puke again, yaaaayy! "Jiminy Crickets!"

He's moving much better after he hurls, enough so that he makes an extremely drunken move on Simone. Ahhhhhh maaannnnn. He's not going to remember this and she actually likes him so this is making me all the sad. That and his puke breath.

Now the making out. Simone knows not of the Jimminy Crickets puking and is just happy Tanner finally made his move.

Third stewardess Courtney Skippon is completely grossed out by Simone and Tanner's public displays of affection but let's be real: what ISN'T Courtney grossed out by? She's the most negative person on the show and that includes our new crew member.

It's 1:40 am and everyone is done. Especially Kevin. 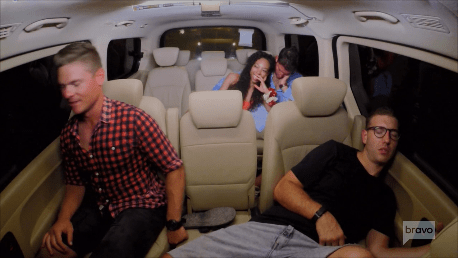 Tanner is able to get Kevin up and moving, but very very slowly. Rhylee is in a similar state, so Kate helps her and Courtney climbs into bed with lead deckhand Brian de Saint Pern who has a bum leg and was unable to join the party this night.

By bum leg I mean he has a raging leg infection that has been resistant to antibiotic treatment and may have to leave if it doesn't get under control.

Simone and Tanner make out before bed. She says it's okay if he comes in with her but there will be no hooking up. None. Tanner doesn't even remember in the morning, but he's happy to have woken up next to a "hot chick with a phenomenal a**", he's in!

Rhylee wakes up wondering if she still has a job, Brian has the same concern as he can't walk on his leg yet. He's going to have to go to the hospital.

Kevin wakes up singing an apology for fighting with Rhylee, but she's also aware getting into a fight with him and Ashton was not a good look. She's quick to anger and that's...an understatement.

Tanner and Ashton catch up on deck, Ashton asking about Simone but both getting interrupted by Rhylee asking where Ashton would like her working.

He sends her above deck, then works through his feelings about her disruptive personality before calling her for a one on one meeting.

But they agree to start again and hug it out. SURE!

Wooooo Pre-Charter Preference Sheet Meeting in the crew mess, yay! Captain Lee Rosbach calls it their Hump Charter, which makes Ashton do this.

Who are our guests?? It's all ladies on our truncated Charter Five, we've got Lynn Schuster as the Primary and five of her fabulous mom friends getting away on a Girl's Trip.

*Cut to Ashton, who's airing out his g-string as we speak

Also joining us are returning guest Wendy Brunei and new to us Tanya Manasan, Kelly Wilson and Jennifer Andreoli. For themes, we've got one Italian meal and one white dinner, perhaps at the same time.

Kate's looking forward to this charter, they're all chill ladies and she doesn't see one dick in this group! Captain Lee laughingly concurs.

Kevin calls Rhylee to deck to apologize, then THEY hug it out! It's almost like things are calmer and more reasonable when people aren't loaded!

Tanner and Simone make out in the crew mess, they're full on now, sleepover tonight again! Awww. Now we've got two couples cohabitating, Courtney is in with Brian and Tanner slips into Simone's bunk to make her moan.

Literally moan, which feels like a lot to listen to. Jiminy Crickets.

The deck crew works hard the next morning to get everything ready for the charter; Captain Lee sends Brian to the hospital for an antibiotic IV drip.

Rhylee quizzes Simone about her night, let's just say she doesn't understand two nights of cuddling without any banging.

Provisions are heyah! So is the car for Brian, who is off to the hospital to hopefully not lose his leg. Everyone else finishes up the last minute things and heads to the deck to await the guests.

Kate feels great about this charter! That worries her, as it should. We all know what foreshadowing looks like.

Everyone is friendly and lovely, Kate takes them on a boat tour while the deckhands hump their luggage aboard ship. The superyacht de-docks under the expert guidance of Captain Lee and we're away.

Tanner, you can't tell everyone specifics of what you are Simone did in bed! What is wrong with you????? For the record, he dove and she was chintzy with her hands, good lordt. We do not actually need such a record, TANNER. And you told Ashton, who makes a crack about Simone not being great at "service."

Rhylee has the exact same response as me: "why would you tell me that??" but then remembers that Simone implied that nothing happened but cuddling...Tanner calls that his idea of cuddling.

I'm not saying he doesn't have redeeming qualities, but he you can't tell everybody everything!!

Kevin brainstorms his menu with Courtney, whose palate he appreciates. He can tell she goes to nice restaurants with Mom and Dad. Unlike Kate, whom he doesn't think is a foodie at all. I think he needs to focus more on food and less on slagging Kate, ya dig?

Also, all Courtney did was make mmmmm noises at him, how exactly is that helping? And his foodie arse just planned Chicken freaking Parmesan, sooo.

Shots shots shots!! It's 98 degrees outside and Brian has a big hole in his leg after the doctor had to cut away some tissue. He won't be able to lift anything heavy or get his leg wet. Captain Lee talks tough in interview but is actually quite empathetic to Brian personally.

We are all Captain Lee.

The guests have requested a beach picnic but it's so hot that Kate came up with a different plan.

THERE ARE BATS IN THE CAVE.

Kevin is making sushi with fresh seafood, I'm pretttttty sure you're supposed to freeze it first to kill bacteria, according to Chef Ben Robinson.

Kate, Ashton and Tanner set up the cave picnic while Courtney serves shots and Simone does laundry. Kate is taking the easy away out and having Courtney on service. Simone isn't quite at that level yet but she's not going to get there stuck in the laundry room, is she?

Kevin calls his daughter and has an adorable conversation with her, he's so young-looking (from the front) that I forget he's a dad.

There's a water level issue with Kate's awesome cave (FULL OF BATS), so Ashton dispatches himself to gather the guests before they have to walk a mile to him. Ashton brings water shoes to the guests but one manages to step on a sea urchin anyway. She soaks her leg in vinegar

In a hilarious move, Rhylee is dispatched on the seabike trailing the two clear kayaks for cleanup. Look how awesome this is: 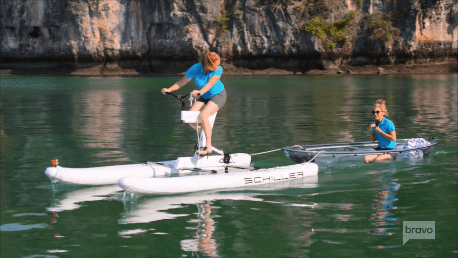 Supper is at 8, RIGHT outside the galley so everyone's gonna have to be super quiet.

Not quiet are the two guests who find a shirtless Captain Lee on the bridge, much squealing ensues.

Simone finds out she's on turndowns, not service and she's not happy about it at all. How is she going to get better without practice? Erm, I'd probably lead with that, Simone, not that you think Kate is jealous because you're smarter than her.

Simone calls her mom for backup, she doesn't have a PhD in folding towels!

Dinner service starts with the stews and chef working as quietly as possible, but they don't need to worry. The guests are happily loaded and extremely loud.

Simone comes up at some point (I have to call producer shenanigans) just as a guest has wandered into the galley to help serve dessert. She can't believe Kate's even letting a guest serve before her.

In this scenario, I am Kevin watching a guest mess up his careful plating without the ability to yell at said guest. He's going to need to run extra hard tomorrow.

Captain Lee is completely surrounded by drunk and verbose women, he bolts down his food and looks for an es-cap-ayy. The guests do go to bed early, yay!

Rhylee asks Kate about her staff, Kate kind of expected Simone to grow a bit faster. Kate calls Simone on the radio, finding her crying in the bathroom. Time to talk turkey! Kate thinks Simone is not good at her job.

She's not happy to hear that Simone has talked to others about how unhappy she is stuck in laundry, Kate thinks that makes the department look bad. Simone tries to reason with Kate, but once Kate has decided you're more trouble than you're worth, it's always downhill.

Until next time, you guys! Cheers