Look! We're back Below Deck already! We're still on our first charter and we're down a crew member. This season is wasting nones of our time! Let's roll into my recap of Below Deck S8:E02 There's No Crying In Yachting after the break!

Last we left our crew of hottie yachties, we'd just lost experienced deckhand Avery Russell to a family emergency. Luckily, we have hippy-dippy extremely and obnoxiously green deckhand Shane Coopersmith still! Bosun Eddie Lucas must be twisting in the wind right about now. Let's find out!

Shane says "BOOM" when he hears that Avery has left, so. Yeah.

Chef Rachel Hargrove gets an earful from Primary Charter Guest Charley Walters, he wants a tasting menu for the first night with food represented from as many countries as possible. She stares at him blankly, all bravado from earlier gone.

It's not going much better on deck, where Shane and other deckhand James Hough can't get the water toys put away properly. Skinny Kenny Rogers (Captain Lee Rosbach) says it's like "watching three bears try to f*** a football" which is awesome and confusing at the same time.

Primary Charley is on a roll, he's not just telling Captain Lee his staff is sub-par, freaking out the chef and harassing chief steward Francesca Rubi, he wants her to know he thinks she's absolute shite, too.

As Shane would say: BOOM.

Captain Lee calls an emergency Come to Jeebus meeting in the wheelhouse, or just a nice one to tell them that Avery had to leave.

WHO IS THIS?? Nobody even had a tit in a wringer?? It's like I don't even know him any more!

Shay, one of the charter guests, has a big crush on James the deckhand, she's even worked out a plan to get him in a Speedo before the charter is over.

Wait. Steward Elizabeth Frankini was sent to unpack all the guest luggage at the beginning of the charter, but she only did the Master bedroom clothing. She didn't touch anything in the other rooms. Primary Charley is mad and I actually agree with him for once. He clearly asked for that to be done, maybe Francesca could send steward Isabelle "Izzy" Wouters down there since she's just wandering around literally asking for some, any direction.

That's exactly what she does, but Izzy is so slow you guys. So slow. She spends most of her time complaining and whining about working on deck instead.

I will give her this: she asks Captain Lee right after all the whining, so she means it! She's not just complaining! He's going to take it under advisement. I just watched two muscular men struggle to move a slide using allllll their muscles; exactly what is this slow lanky noodle going to bring to the party?

Rachel has a tonne of food ready to go, but Izzy is STILL unpacking bags, Elizabeth is making drinks and Francesca is looking for the captain's black pants that Elizabeth didn't put away properly.

The guests are starving, Francesca finally pulls Izzy out of the guest quarters to find the pants and does service. There is an international theme, which means Francesca thinks she looks like a geisha while we know she looks like someone working with only two hours sleep, a silk robe and without a hairbrush.

The deck crew is there to help, Eddie is in the kitchen with an apron on, but Shane wants to be in with the guests, next to Elizabeth presenting fancy international drinks. Eddie has to call him three times to get him out of the dining room. WASH SOME DISHES. A tasting menu takes ALL the dishes!

In the middle of service, Francesca inexplicably goes into the guest rooms and starts freaking out about turndowns. This is a tasting menu, so small bites and lots of them. What is she doing?? Not answering her radio, that's what she's doing.

Two dishes, then Rachel goes into dessert. This is insane. Nobody would pay for this.

Primary Charley and boyfriend Carlos Pantoja push their way into the kitchen and force Rachel into letting them help her plate dessert.

I hate everything about this charter, and I'm not even working it!

Primary Charley is right about one thing: this superyacht is severely understaffed. Rachel tells Captain Lee her perception of the problems with supper (Francesca needs to supervise her staff better) while Francesca walks all over the boat picking up things and crying.

Captain Lee calls Francesca up to the wheelhouse to cry in one place, he doesn't know exactly what to do.

Francesca goes to bed at 1:15 am still crying, but is up at 7 with yoga and meditation. She's got this!

At 9, Captain Lee directs the crew to pull anchor and Rachel sends Francesca to get breakfast orders, this day is officially underway!

Every single guest has a complicated breakfast order with a minimum of two specialized ingredients that requires at least 120 seconds of explanation.

They know there's just one chef! 8 omelets and not one omelet pan. Rachel is extremely frustrated, but Eddie's having fun on deck teaching Shane about anchors. BOOM.

Eddie has an education degree...in adventure. And I don't think he was joking.

The guests are momentarily distracted by sexually harassing James, then they remember to complain that they don't like their avocado toast with smushed avocado but rather sliced.

Now it's Rachel's turn to cry as yet another plate comes back and she can't get another stupid omelet out of those stupid non-omelet pans. So frustrating. At least the guests are understanding.

It takes literally hours to feed everyone, I can't blame them for being mad but.

Look how pretty it is where they are!! 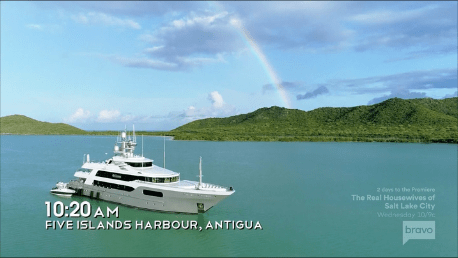 It's guest Lexy Clark's birthday tonight, so Primary Charley asks if maaaybe she could have James for dessert? I love that his boss Eddie prefaces the request with "You can absolutely say no to this." It's a body shot, so a lot of contact, which James is totally down for.

People have their preferences, I get that, I'm just trying to imagine someone saying "sure, as long as it's not a fucking BRUNETTE." Which you wouldn't, because there isn't a lot of character assassination built into being a brunette. Blonde and redhead, yes. I'm going off topic. YOU KNOW WHAT I MEAN.

Oh boy. Shay and Lexy both like James and Shay does NOT like Lexy getting time with James.

Look. Ladies. Have you heard the man talk? He's a fucking moron.

The guests head off to the beach with Izzy to serve drinks, Lexy gets to ride on a jetski with James and everyone is jealous.

Shane takes advantage of this time to not help clean up or do his job, but rather take off his shirt and go swimming next to the yacht.

Captain Lee does not play that.

He finally gets Shane on the radio and Eddie clues in and radios again as well. Eddie is on beach with Izzy, he runs her through some paces when she tells him she applied to be on deck. I mean, she has the qualifications, she just doesn't appear to have any...initiative. Or upper body strength.

However! She has experience and Captain Lee is seriously considering it. That would mean he could find a strong second stew to help Francesca, who definitely is doing better tonight but.

The guests love their supper and neon gear but Shay is SALTY about Lexy being all over her birthday gift James. Shay staked her claim first, but Lexy is getting all the James and

A huge fight over James breaks out at dinner, just before he can make his sparkly Speedo debut. One of the other guests challenges Lexy (on her BIRTHDAY) about James and the jetski, she would never go after someone her girlfriend likes. Guest Carlos throws fuel on the fire by yelling at the friend, everyone is fighting and Lexy didn't even get her birthday cake yet!

Poor James dances around in someone else's sparkly underwear, he doesn't even know the troubles his toned behind has wrought. Shay is finally calmed and seated, the party can begin!

And then more fighting after James finishes shaking his arse for tips. Literally. We're out! Until next time, you guys! Cheers.