Wooooo we're just motoring through this 8th season of Below Deck, aren't we?? Wait. I just realised we're on the third episode and we're still on our first charter and it's...not a good one, is it? Let's find out how many more crew we lose this day! Rolling into my recap of Below Deck S8:E03 Max and Dax's Excellent Adventure after the break!

And did NOT like sharing him with another guest. She pitched a hissy fit during that other guest's birthday party, where James performed in someone else's sparkly underwear.

Primary Charley is horribly embarrassed, it's like he didn't see his own behaviour over the last 36 hours.

James and chief steward Francesca Rubi end up on the late shift together, deflating balloons and flirting. After some deep thought, James decides he'd do Francesca.

Yesterday the guests ran chef Rachel Hargrove ragged with their ridiculous orders (down the seasoning of the 8 different omelets), she's come up with a workaround! Breakfast specials!

It's raining and as cold as Antigua gets in the high season, but it's time to get superyacht My Seanna back to Jolly Harbour so we pull anchor and head out. Bosun Eddie Lucas wakes up James two hours before his shift to help, the only other deckhand is super green Shane Coopersmith, Eddie needs all the help he can get.

This is a tricky docking, Captain Lee Rosbach asks for radio silence from the Interior crew as he negotiates a very tight space with a very big boat. The only sounds like a euphemism. I think that's the first time I've actually used radio silence to mean: quiet on the radio, too!

The Interior did not hear/understand Captain Lee's radio transmission (you can't hear shit on those things) so continue merrily asking each other to serve French toast and things while the Captain tries not to bang his giant superyacht against a tiny little docking pad while the wind rises.

I know! Still not a euphemism!

Captain Lee yells at yet another Interior member on the horn, he's tense.

Time for these charter guests to LEAVE. BAI. Not even kthxbai, just GTFO. DLTDHYOYAOTWO. Lots of hugs and kisses, awwww, so sad. GET.OUT.

We just know there won't be a big tip at all and it's kiiiiiind of bullshite that Bravo made us wait three episodes to find out how tiny it is. Boooo.

Primary Charley hands over an envelope and leaves, we gotta wait an hour to find out what's in the cookie jar because Captain Lee's reworking some personnel in the meantime. One of the Interior crew, Isabelle 'Izzy' Wouters wants to move to the deck crew. Since we're a person down after a family emergency and Izzy has her yachtmaster certification, this makes sense. Since she's also noooooot a very good stew, this is a really good choice! Francesca and Captain Lee are happy!

I wonder who we'll get back...you know Bravo likes to do repeaters...

Holy shite. Charley Walters left our crew $25,000 USD. That's at least $20,000 USD more than I expected. The crew is shocked too, they get $2,273 each and wow. How. How? He went behind the bar and served himself! They complained about service the whole time!

The team sets to work cleaning My Seanna to get ready for the next charter, they only have to work until 7 or something because Captain Lee has given them a night off for "dinner".

Izzy is dying to get outside, but Francesca wants her pound of flesh first. Instead of rearranging the pantry as directed, Izzy goes into the galley to gossip with Rachel about her adorable boyfriend.

Izzy has a silicone partner that she isn't planning on replacing any time soon. Maybe the batteries.

She does pretty well during Eddie's training session on the dock, he's a good teacher! It's interesting how laidback meditator Shane just got super competitive about sailing stuff once Izzy joined the team. Izzy is qualified, but we shouldn't discount Shane because he's not used to yachts. He's a long time sailor.

Captain Lee calls Francesca, Eddie and Rachel to the wheelhouse for a pre-charter Preference Sheet Meeting, wooooo! Ahhhhh but we've got 22 year old bros coming on board. Is it too late to get Charley back?

Dax Nittolo and best brah Max Gilliam are coming aship with their close group of friends...maaaannn. Okay. Just because they look like James and are rich, I shouldn't assume they're nightmares. Oh wait. They want sushi served on a naked woman. Assumption confirmed. I just think: wouldn't that make the sushi warm? It's way better cold.

But that's tomorrow! Before that the crew gets to enjoy their first night out together of the season, James cannot WAIT. His job back home is Manager of Traffic Cones At Night When It's Pissing Down Rain (do people apply for that?), he didn't have a social life and we should expect a night full of things he will regret tomorrow. If he only had a brain.

He is sooooooo not happy when the night is called before 10:00 pm, he's on a holiday! His boss Eddie makes sure he understands: he is not on a holiday, right? You know you're here to work, right, James?

I am not sure James understands that part. Flirting with guests, sure. Make eyes at staff, check. Wash the boat, okay, if he has to. Everything else: go out and partyyyyyy wooooo.

I also like to head home before 10:00 pm when I go out. Not that I can go out these days, our province just instituted some halfassed lockdown measures that means that we can't get booze after 10 pm but we can still swim with large groups of people. I don't do either, so I will try to stay in my little flu-free bubble as long as I can.

Hey, our new steward has arrived and she's not a repeater at all! Hai Ashling Lorger from Australia! She's an adorable pint size blonde who James immediately tries to jump. She chooses to room with steward Elizabeth Frankini instead, awww. Instead, Izzy will room with James, he's pouting already.

Speaking of Elizabeth, she's messed up ironing Captain Lee's clothing again so Francesca promotes her with extra stripes in order to motivate her to excellence. That's...not how that works...

They look even younger than I expected. Captain Lee has ties that are older!

Francesca leads the guests on a boat tour, I am completely distracted by this short hairy kid with elf ears and his hat on backwards over a Hawaiian shirt. Francesca is already wondering where their money came from; these kids should be serving her!

But they're nooooot so keep those margs coming!

HatBackwardsHawaiian falls down the stairs less than an hour in.

Poor Ashling just flew 30 plus hours to get to work, now Francesca's decided to do a brain dump of the one thousand things expected of her, I'm guessing she's going to retain precisely zero of that.

Everyone keeps gasping in horror at the laundry room but it looks good to me?

Captain Lee likes to find rainbows to anchor next to and I'm not mad about it. 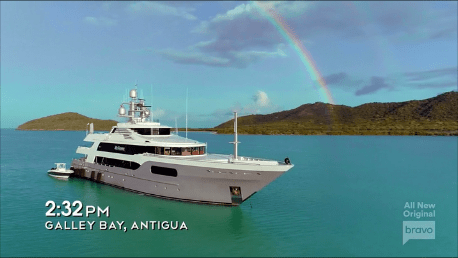 When the sun comes out for a minute, the guests take turns jumping off the boat as Elizabeth goes on break and Francesca takes the opportunity to shittalk her staff. Hm. Seems giving Elizabeth the two stripes did not motivate her to do the work she hates, weird.

The weather turns bad again so the guests are asked out of the water and Shane declares rain on the radio. Eddie...well, Eddie's one of those guys that thinks he's funny because he uses mild sarcasm. He jokes back at Shane who is NOT having that. He will NOT be disrespected!

Eddie explains, and this is something that I do with my kiddos. When I want them to be aware that they're doing something unfortunate but I don't want to hurt their feelings, I will joke about something. Turns out they don't always understand, and neither does Shane. It had been raining for about five minutes when Shane reported that rain was coming, that's why Eddie called him Captain Obvious. He lays it out for him clearly: if you don't like my joking, here's what I meant: pay more attention, be more observant and don't waste time on the radio.

Shane and Eddie head off to the harbour to pick up the naked model, who looks exactly like the server they had the night before in the bar?

Much table setting is afoot as Rachel works on sushi with large cuts of deeply pink salmon. Every time we get a new food experience, she tells us how she practiced that craft for three months with some master in a cave somewhere. She's either amazing or a massive fecking liar.

It's dark when Eddie and Shane get back to My Seanna; Captain Lee watches as Shane throws a line into the water and flounders trying to connect. They eventually get back on the big boat and it's time for setup! Captain Lee definitely made a note of that, he's already thinking of replacing Shane, who he thinks will get someone killed.

James will not stop hanging around the woman being dressed in only sushi and banana leaves, it's super creepy.

Rachel is so excited about her food, I can't not like her! She's especially enthralled with the Otoro tuna.

The kids have several pieces jammed in their faces while asking for jello shots; let's just say it's like casting your Otoro before trustfund babies.

Ashling works late on the laundry, even though she's on early the next day, she ends up in tears in the crew pantry as one of the 12 year old primaries listens in the hallway. And with that, we're oot! Until next time!