Ahoy hottie yachties and admirers on Below Deck! What's shaking this week with our charter full of babies? I'm glad you asked! Rolling into my recap of Below Deck S8:E04 Do Not Disturb after the break!

We open where we closed, with brand new steward Ashling Lorger in tears in the stew pantry after the longest.day.ever. She's not even crying over our 12-year-old charter guests, but rather just that she's so tired. She flew something like 33 hours and has lost her luggage so she doesn't even have underwear for tomorrow. Chief steward Francesca Rubi or steward Elizabeth Frankini asks if Ashling wants hers, but some things just aren't for sharing.

Francesca is uniquely positioned to understand Ashling's assured mortification at crying in front of her boss. She did the same thing on her first day, sobbing uncontrollably all over Captain Less Rosbach.

Bosun Eddie Lucas sorts out the scheduling of his crew, super green deckhand Shane Coopersmith will stay up and help Elizabeth in service (by that I mean he's washing dishes), deckhands Isabelle 'Izzy' Wouters and James Hough will be up early. Eddie is already exhausted from carrying everyone, calm down, sunshine! Work on your management skills!

Shane goes down, wait, James is up with Francesca and the guests, who want to tell him how smoking he is. Erm. I mentioned the ages of the charter guests, the one waxing poetic about how hot James is co-Primary Dax Nittolo. His girlfriend is not happy about the lack of attention, also, how can anyone think James looks like Tom Hardy?

Max Gilliam is the other co-Primary, also only 22 years old, so yeah. Dax even called his mom to tell him how the charter was going, so I can't hate him at all. At all. Now I want to cook him waffles and remind him to do his homework.

Chef Rachel Hargrove figures she has James' number, she knows people like that who use their charm to not do any work.

It's 2:00 am before James finishes covering up cushions on deck that will be taken off in four hours, what was the point of that? Why were Rachel and Francesca up until that time too? The guests crashed at midnight.

The first shift rolls out of bed at 6, it includes Francesca and a much better rested Ashling. Even the guests are up! Unfortunately, James totally half-arsed it the night before, so Eddie and Izzy scramble to clean the deck area so the guests can hang out. It takes the two of them two hours to clean up, that's mental. Watching James toy with cushion covers instead of cleaning the food off the deck on the reunion is going to be FUN!

Rachel is making lobster benedict for brekkie, YUM!! The guests go for it, Rachel almost seems zen as she explains her plans for the meals for today. After a Mexican beach picnic, they're going to eat grilled meats off a barbecue while sitting in a hot tub.

I love how relaxed and relatively well-behaved the guests are, you know it's because they're good kids and their parents paid hella money for them to go on this trip BECAUSE they're good kids.

The guest finish up their delicious breakfast and head out on the water on jetskis. Look where they ARE. 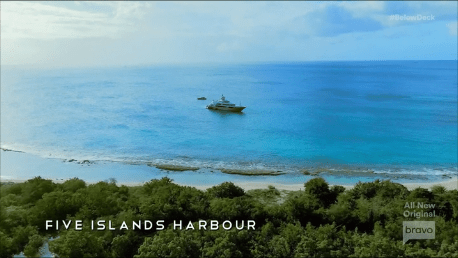 You can't see it in that picture, but Captain Lee parked us by a DOUBLE rainbow this time, wooooo. Izzy's an experienced deckhand but she's never been on a jetski so she's excited to get at it.

There's a Mexican-themed beach picnic coming up today, Francesca tasks Elizabeth with pulling drinks so Elizabeth slides that responsibility right on over to new stew Ashling. Elizabeth was recently promoted to second steward, so it's not unheard of to delegate, but it was a conditional promotion that's left her unsure. I'd say that was the correct response, since Francesca likes to micromanage and doesn't actually trust that anyone (but her) will do anything properly.

It's 2:00 pm and the picnic isn't set up yet, but the guests haven't eaten since 8:30 am. They asked Elizabeth for some MacNCheese Balls but Francesca made a stink about not being notified then went off to the beach leaving the guests hungry and the chef unsure of what to do. Rachel doesn't have any macaroni.

Nobody brought over the pitchers of margaritas, which is the first thing the guests ask for, after they notice that nothing is actually set up yet. The crew is so lucky these kids are so young, they're asking each other things like "can we just go sit at the table?" Can you imagine Charley Walters putting up with that shite?

Eddie runs it back over then heads back to My Seanna where he's immediately asked to come back with sunscreen, which Francesca told Elizabeth to pack. She did not.

Maaaaaan, it's so easy to be judgy but haven't we all forgotten some rich kid's sunscreen on a beach in Antigua before?

It's usually a break for the crew when the guests go to a picnic, but it's been not quite two hours and Eddie's done 7 tender trips. The guests wanna come back to the boat and it breaks my heart a little when I hear them keep saying things like "are we allowed to go back to the boat?" Girl. Someone's paying seven figures for you to do whatever (legal) you want. Do it!

Izzy and Shane clean up the ill-fated beach picnic, she tells us about her medical history. She has Guillame-Barre Syndrome and one time was paralysed from the shoulders down. I have no idea what this had to do with a series of hospital selfies and one of her waist down, but sure.

She's a hard worker, Eddie is already complimenting her regularly so I hope she doesn't feel inadequate here.

Eddie sits down for the first time today for some supper and is immediately called to the Wheelhouse for a post-event analysis with Captain Lee. Captain Lee saw everything that happened today, he's not impressed with the Interior and he wants to know when they're gonna snap out of it.

Rachel pitched a cool cookout for supper but the guests have talked amongst themselves and they want to do a proper "normal" sit down dinner which mostly seemed to be about wearing their good dresses.

I am 100% with you, ladies, but someone should tell Rachel, who is grilling lobster tails and Filet Mignon next to the suddenly empty hot tub.

She sees the table set on the aft deck and radios Francesca, who casually says: oh yeah. We moved. It was a 5 second radio call that would have saved Rachel 60 minutes of aggravation but I don't know if Francesca is a bad communicator or just underwater.

Supper goes off without a hitch, the guests love the food and go to bed early, around 1 am. Francesca is still up?? I don't understand, she's been up since 6 and was up late the night before that. Is she planning to do everything herself instead of properly delegating to her team?

It's the last day of the charter already, lookit how awesome these kids have been! Remember how worried you were about them? So silly. They're great.

You know when you only listen to people who think just like you and you delve so deeply into the minutiae of something you like and you miss the fact that it's just not that different from anything else?

That's when you get duck confit with waffles instead of chicken and waffles and you think it's revolutionary. It hurts me more than it hurts you to make fun of confit, because everything cooked in fat is magical.

Rachel's breakfast special is duck confit with waffles, pretty much everyone goes for it.

The deck crew does a great job docking and it's time to say goodbye to our junior charter! Primary Max gives a nice KThxBai but does mention that waiting for the beach picnic sucked arse, so we'll see.

It's time to clean the boat, you know there were kids aship because there are Cheetos stuck behind a couch. Captain Lee calls everyone to the crew mess for a tip meeting, how do you think they did? Last time they got a huge tip, but I don't know much about the gratuity-ness?Ing? of young 'uns, so I'll say $18,000 USD based on nothing.

Captain Lee takes a minute and opens the floor for any complaints, but Rachel isn't ready to burn her relationship with Francesca yet. There is a huge communication problem that is yet to be resolved. Back to boat cleaning!

I kind of love Rachel.

Party time again, already?? It seems like it was just yesterday with James complaining that all these work-y buzzkills were ruining his holidaying vibe.

Woooo this time everyone takes pity on him and they go party, yay! By that I mean they're the only patrons at a seaside bar full of...them.

I know everyone thinks James is adorable and he loves his bum and I'm sure it's all very attractive, but try and hold a conversation with him, I dare you! He keeps interrupting people's conversations with non-sequiturs about drinking games. Are you...18, James? No, 26. Huh.

It's not just that he's spitting shite, it's also that nobody can understand him. I don't even think his accent is that bad, they just don't get his banter and that's a shame. Everyone needs a bit of bantz.

Everyone heads back to the boat relatively early so James has time to lament how little joy is generated by his daily work. Nobody's having fun! What's the point?

For myself, I just like jobs that don't actively make me want to climb inside a tin of Belgian cookies, that's all.

Things look better for James in the morning, as they often do on the other side of a bottle of rum, and he decides to stick it out. That might be partially because his mum calls and gives him a bit of support. We all need a bit of that sometimes. I forget that even the very conventionally attractive need a bit of love to keep moving.

Elizabeth is determined to learn how to iron Captain Lee's pants and she gets help from an unexpected quarter: Rachel, who was an ROTC officer.

Huh. That explains the hair?

We're about 24 hours out on the next charter, Shane figures he'll go have a nap so he's able to better perform when needed or some shite. What.

I don't think you get to take a nap while literally every other person is working their bums off on the ship. Except Captain Lee, but he's probably thinking really, really hard.

That's where Eddie finds Shane: in bed, wearing an eyeshade with "Do Not Disturb" emblazoned across the front.

Until next time, you guys! Cheers!