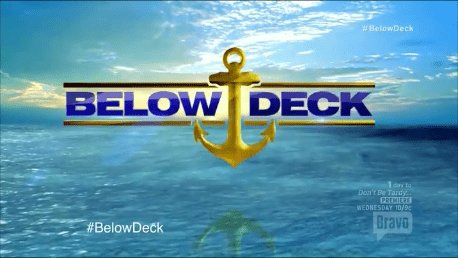 Hi! I am suuuuuper ready for some distraction in the form of watching rich folk get blasted on Below Deck, who's with me?? Wooooooo rolling into my recap of Below Deck S8:E06 Just Another Day in Paradise after the break!

We open in the galley where chef Rachel Hargrove is being "passionate" about finding some missing caviar for a fancy party this night. By that I mean she's using profanity and graphic detail to explain how much pain someone is going to be in if the right fish eggs don't show up right skippy.

Deckhand Shane Coopersmith heeds the warning and gtfo, third steward Ashling Lorger has a sister for a chef and knows exactly how to deal.

Rachel calmly calls her provisioner (wow, who would think that would work coughTomChekketscough) as the guests ask chief steward Francesca Rubi for a tour of the less camera-friendly parts of My Seanna.

That sounds like they're shooting a 70s pron movie, but My Seanna is the superyacht, silly!

Captain Lee Rosbach grudgingly agrees to the tour, I wonder if the guests will see the REAL master suite, covered in video editing equipment and Bravo TV producers!

The deck crew is hard at work under bosun Eddie Lucas, who is all the way over Shane and his Berkley education he won't shut up about. He needs someone who will work hard. He's got Isabelle 'Izzy' Wouters and James Hough, who both are decent (Izzy slightly more decent) but Shane...well. Shane does good work with exchanging paper straws for plastic ones. He chooses to chide Eddie on the radio for having his fenders out...he's a moron, 3.5 Berkley GPA or not.

Rachel hears from her provisioner, of course she's getting good caviar in time for supper so why did we get a cliffhanger AND multiple repeats of Rachel threatening someone's dangly bits? Why did she lose it so hard? How did Bravo know she'd be the type to lose it so hard and for so little reason?

That's the genius of a Bravo producer.

Captain Lee stalls the guests with a very slow boat tour as Eddie races to Jolly Harbour for the errant tin of caviar.

That would be much more like an Inside My Seanna tour, Captain Lee!

It's 25 minutes past dinner and there is no caviar in sight, Captain Lee has done his best but we're all looking at the empty plates now.

Rachel finally gets her caviar and then dumps $100 worth on the floor. I mean. The guests love the food, of course, and Eddie loves Izzy and James but hates Shane. Eddie is super happy with the effort *most* of his deck crew is putting forth *side eye Shane*, they're an awesome team!

I'm only including this because we know later she tells him to eff himself and we need to know WHY.

The guests have a "fun" "game" where they arbitrarily predict their prosperity and longevity by pouring red wine into their mouths from as far away as possible. Have I mentioned this is a White Party? And the yacht decking is teak? Yeah.

I hate everything they're doing but I accept that they are probably having a great time and don't care about clothing, their memories or their surroundings.

Captain Lee is cajoled into giving it a go, you can't help but love two middle-aged women scampering through the hallways shouting "RUN B**CH!!" at each other to get him a special shirt for protection.

I don't drink, so I'm a total buzzkill. Those ladies were awesome, though.

Ahhhhh speaking of the ending of buzzes, Ashling gets a call from her mum and it's the first we hear of COVID-19. The date is February 21, 2020 and no real restrictions are in place, are they? Maybe in China. March 13, 2020 is when everything went nuclear here.

Francesca hands off evening guest service to second steward Elizabeth Frankini, let's just say...Elizabeth isn't checking on guests or doing any service. It's a full 30 minutes before the guests go looking for someone to pour them booze, I'd be pisssssssed. It's almost an hour when guest Lee finds Elizabeth and Francesca together and she brings them drinks.

Francesca is mortified but also angry, she gave very clear instructions to Elizabeth who is feeling sorry for herself for having to work and not swim.

Francesca explains her frustrations to a near-comatose Rachel, who does not want to get involved.

James flirts with Elizabeth, who is so so very slow, honestly, how is she in service? They close down the night.

Shane was sent to bed before James because Shane and Izzy are supposed to be on deck at 6:30 am. Izzy's there, but Shane's phone died when he fell asleep facetiming his girlfriend so he oversleeps by a full hour plus.

Rachel pumps out breakfast like nobody's bidness, she's got this down! Wee omelet pans everywhere! It's the last morning of charter and everyone is chill and ready for some downtime.

Except Elizabeth and Shane, they're pretty well rested.

Izzy lifts anchor under Eddie's watchful eye and we're on our way back to Jolly Harbour for a tip wooooooo!

It's a complicated docking, made worse by Shane's ineptitude.

The real problem is that Captain Lee has lost his stern thrusters *shrug**I dunno* and the wind is blowing him away from the docking space.

Then Shane messes up again and huh. He admits it, I'll give him that, but Captain Lee is all done with on-the-job training.

Wooooo Primary Charter guests Beth Fegan and Tim Scott give a nice goodbye speech, it was Tim's 50th birthday last night and everything. They also leave a beeeeeg envelope, wooooo! Let's crack that puppy open, Captain Lee! The last charter tipped a miserable $12,000.00, I will bet this one is at least $18,000.00.

First we have to watch them clean the boat and yell at Shane, booooo. Show us your tip!!

Captain Lee takes the whole deck crew over to the dock to go over what lines go where when, he's extremely unhappy with the choppy docking today.

Shane stays behind after the talk to practice what Captain Lee showed them; do you ever wonder if he's like a fish on a bicycle? He's not stupid, I've heard he got a 3.5 GPA at Berkley without even trying, but he just might not have a natural affinity for yachting. Or he could just be locked in a combination of freezing under pressure and self-doubt, who knows?

Captain Lee waits until everyone gets rolling on the cleaning then calls the team to the crew mess for a tip meeting. Woooooo!!

Also: funny how everyone is able to hear THAT on the radio without issue.

After the tip meeting, Captain Lee calls first Eddie then Shane to the bridge. It's time to decide what to do with Sunshine who doesn't even hear his radio because he's too busy singing "Just Another Day in Paradise" to himself.

But we won't find out what's shaking with Sunshine today! That's our cliffhanger and hey! It looks like the Rachel/Captain Lee fight is next week, I sure hope that's editing. I forgot that Rachel's boyfriend is Italian, they had that huge scary wave of COVID back before it hit over here in North America, wow.

I don't know if this is weird or not, but it's a relief to be able to talk about the Coronavirus now because it's literally 99% of the conversations we have here now. I live in Alberta, Canada and we are having a huge second wave of infections right now and it's difficult to concentrate on anything else. Below Deck is a welcome distraction, so I wouldn't want to JUST talk about COVID-19. Until next time you guys, cheers! Stay healthy.