We open in the middle of couple-dramz, deckhand James Hough in the crew mess with the instagram posts letting steward Elizabeth Frankini know she's not important. It's not that he's immature, it's that he's LOYAL and therefore is punishing her for not sticking up for him enough when chef Rachel Hargrove drunkenly attacked him.

I wouldn't be in my twenties for all the champagne in Below Deck's coffers.

There is medical drama afoot (or a-tummy) as well, Elizabeth has a UTI, second steward Ashling Lorger has a dodgy tummy and Rachel's is that, but with impromptu farting. Captain Lee Rosbach called for a doctor to be brought aboard; I don't even remember that happening when we're mid-charter before.

We've got Chris and Erika Heule on charter from Friendswood, TX, along with their son Sam and his insanely hot wife Lindsay Raspberry. I mean, the yachties on Below Deck are already beyond it for conventional beauty, Lindsay takes it to another level. You can tell because the camerapeople are always zooming in on her.

Back to the doctor, she prescribes antibiotics to both Rachel and Elizabeth, Ashling doesn't go see the doctor because that's badass, somehow. Sure. Chief steward Francesca Rubi admires that because that's what she would do!

The best part about this charter is a wee Yorkie named Gigi, who just pooped on the deck. This doesn't bother deckhand Rob FromCanada, he once had an adorable bitey dog who now lives on a farm. "It's a love story."

Speaking of whatever the opposite of that is, James feels bad for being a shit to Elizabeth so starts sucking up to her in the crew mess again, this time at supper. She's not having that, good for her.

Also tough is Isabelle 'Izzy' Wouters, her boss bosun Eddie Lucas wants to promote her to lead deckhand. It seems like just yesterday I used to argue that wasn't even a thing, hm.

Izzy is surprisingly muted when Eddie offers her the role, she's worried her roommie James is going to be a particular pain in the arse. On that: thanks for the James-Farting shot, Bravo!

Oh. We're back in the crew mess with James and Elizabeth again, apparently this is where we're living this episode. Elizabeth doesn't understand why James is being so weird (immaturity can look like a lot of other things), leading her to ask Ashling if she and James have a thing. Let's see if I can put my finger on what Ashling thinks of James...it was something like

Elizabeth and James chat in the crew mess, it's ridic because he won't admit that his feelings are hurt and he's trying to make her feel bad, so she's flailing around in the dark trying to fix something she can clearly see is wrong. Dating is FUN. Or whatever the opposite of that is.

One of the guests has taken a serious shine to Ashling, his name is Justin and he's cute if you're into trucker hats and sunburned bellies.

James does seem to be going out of his way to chat up the popular and lovely Ashling, Elizabeth walks into the crew mess (aka drama stage left) to hear them laughing and immediately feels insecure.

Rachel struggles through a dinner service, just one more meal and she can go on a hydration IV and hopefully get better!

Even though Bravo did some shitty COVID-baiting earlier with how they presented Izzy's illness, it's still really interesting to watch things unfold from last March. This is March 8, 2020, 5 days before the world went into lockdown and I got Dwight. 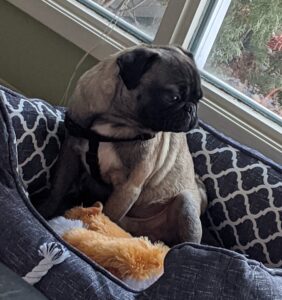 Eddie and James chat casually about stealing hand sanitizer (if they were really smart, they would go for the toilet paper), New York's number of cases went from 11 to 79. Man, 79 would be AWESOME right now. They call Antigua and the islands a safe zone and I dunno...

Elizabeth decides to give James another chance, she fetches him a cannoli from the kitchen but makes the mistake of radioing him to meet her. Her boss Francesca hears and makes a point of busting them, even though Elizabeth isn't on service.

Francesca is kind of an arsehole to Elizabeth. Eddie sighs when Francesca tattletales to him about James, looks like Disappointed Dad is going to have to make an appearance.

The guests eat supper until 1:15 am (??!!) then head to bed, ending a relatively chill charter on a good note. Elizabeth and James make out in yes, the crew mess, looks like we're back on again!

Ashling wakes up bright and early for her shift, feeling like a dog's breakfast. Perhaps she should have seen the doctor that was on board? Maybe?

She struggles through breakfast service, along with Rachel who's trying very hard to keep it in her pants. Only three hours left in this charter and until the tip meeting, wooooo!

Breakfast service doesn't go well. Francesca chats with the guests instead of serving and we have a lot of eggs that are going...where? We don't know. They all look the same but some have toast. *shruggy emoji*

Francesca is irritated when Elizabeth pops up for her shift asking where she should start, even though Francesca just yelled at Elizabeth for not checking in with her at the start of her shift.

The deck crew pulls off a great docking, then it's time to change into dress whites and get that fat tip, yo! Wooooooo!

First we gotta start cleaning the boat while hovering over our radios, but there's fun in the kitchen! Wait. Rachel was on America's Next Top Model???? 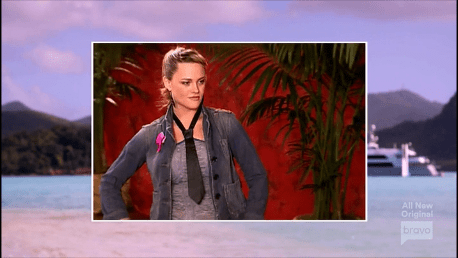 She WAS! Holy shite, I probably even watched series 3. That's very cool. Tyra Banks said Rachel wasn't serious but she didn't even know about the drunken ragemonster that lurked beneath the surface.

Captain Lee follows that up with the information that they'll be litter picking on the beach for the rest of the day, James is disappoint.

What....is James doing with his hand entirely up his shorts again? This time in the crew mess?

He knows people can see him, right?

HAHAHAHAHAHAHA James is saved in Elizabeth's contacts as Eggplant Parm? 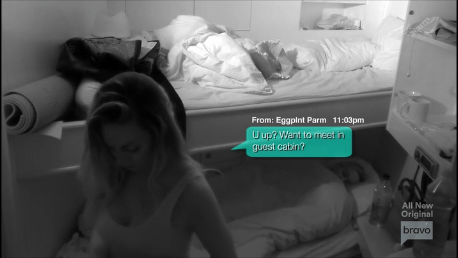 They meet in a guest cabin to enthusiastically agree about something. Oh yes!

The next morning, Ashling's stomach is even worse so Francesca calls a doctor, Ashling will have to go to shore to see her. If only there was one on the boat, just a day ago. I'll stop harping on that, swearsies, just so stupid.

Nobody knows yet that James and Elizabeth spent the night in a guest cabin, hey, Elizabeth is 30 tomorrow! Wow. I thought she was early 20s, James is only 26.

I'm wrong, James's roommate Izzy knows where he slept last and with who; she's not shy about sharing that information either. Once Francesca hears, it's ON.

She hates Elizabeth, it's so obvious and so biased and just bad management all around.

Now that I know Elizabeth is 30, I find myself judging her in a whole new way, and really: who am I to judge? I made heinous mistakes for years and years after I turned 30. I still do! It's not like age is a guarantee of maturity.

For the record; it's usually okay for crew to sleep in guest cabins, they just have to ask their bosses.

Okay! We're already in our Pre-Charter Preference Sheet Meeting for our next charter! And they're returning guests, I love that!

You remember David Siegel and Jackie Siegel, aka The Queen of Versailles? She was on Below Deck Mediterranean episodes S4:E07 All Hail the Queen and S4:E08 What Eze the Problem?

Steve and Janessa Siegel are along for the ride, Rachel makes this face at Captain Lee when he describes their meal choices.

Francesca stews and stews and stews about Elizabeth overstepping her position by sleeping in a guest cabin without permission, finally confronting her subordinate in the crew mess (of course). Elizabeth tries to hedge, which pisses Francesca off even more, she ends up shouting personal attacks at her as Elizabeth carefully tries to remind her to be professional.

And that's it! We're out! We find out next week if Elizabeth and James get fired for this, which is a real possibility and an unfortunate outcome that's been foretold since the beginning. Francesca just does not like Elizabeth, for whatever reason, and this might be enough to oust her. Until next time! Cheers