We open with nightmare guests Charles and Primary Erica Rose complaining about the food they loved the night before; although, to be fair, Primary Erica was sticking up for the food but also speaking for her mom Cindi Rose about how much she disliked the food.

I think if you can't even say yourself that you didn't like something: your opinion doesn't count. And if you're a drunk/hungover arsehole with a lisp and a lech for 22 year old third stewards, you can pound sand.

Because chef Marcos Spaziani creates amazing meals and I do not say that lightly. He tried to give them fancy; they didn't want it. He kept feeding them even when they tried to make up new designations for steak (medium plus? Fuckouttaheyah) and the fact that Charles keeps calling his food disgusting is making me even more angry than that stupid medium plus.

Chief steward Daisy Kelliher would like Chuck to go screw himself, we all nod.

Captain Glenn Shepherd listens to these batshit crazy guests, promising to make sure tonight's meal is amazing. You have to know Captain Glenn; he's Canadian and extremely even-keeled. He shrugs off Charles's comments because it would be difficult to take anything seriously after "McDonald's would be better than this!"

Even the guests hate Charles!

Most of the crew heads over to the beach to set up for a beach picnic; this will be 100% differently received than the crappy set-up done by second steward Gabriela Barragan for last charter. Deckhand Tom Pearson is determined to make it fancy, he finds attractive plants and stages them in the dirt around the covered picnic area.

Guest Cindi Rose sat her self-tanned geriatric arse all over the $50,000 sofa and now it's ruined. Y'all got someone's credit card on file for that, right? Awesome.

I am so ready to never hear Charles talking again.

After all that, Charles compliments the beach picnic spread and says maybe he was just hungry this morning. When he was not eating two custom omelettes made for him by a FANTASTIC chef.

Charles has now decided to take his temper out on fellow guests, Janelle pisses him off somehow so he flies off the handle. Primary Erica will not allow her husband to yell at her hairdresser, though, too bad, so sad Charles. Janelle's husband Rhett hears Charles call his wife a name and is up in his face immediately, this is such an awkward situation.

Charles denies calling Janelle a b-word but there's Bravo rolling tape all over his lying arse. Omigod I hate this charter so much ARE THEY DONE YET???

The bad feedback this morning has Marcos stymied; he can't start prepping food because he doesn't know what this charter wants to eat.

Back on the boat, guest Rhett tells someone on the phone about Charles' habit of going to fancy restaurants and complaining about the food to get free meals and that explains the performative nature of Charles' outbursts but not how he was able to meet and marry another human.

That Cindi is so super creepy. She's like a doll overfilled with collagen with a haunted spirit inside occasionally peering out of bulging eyes.

*sleeping with one eye open*

Second steward Gabriela got third steward Ashley Marti's back up before charter by confronting her for not having enough work done; they work next to each other in complete silence. Ashley breaks first and heads to the galley to complain about Gabriela and never getting a chance to do laundry (said nobody ever); Gabriela pops down to let her know she can hear her loud and clear from the bar area.

Ashley heads Below Deck to flirt with first mate Gary King in his bunk, he's just not very interested in her. She's not even throwing out hints anymore, it's all sledgehammers and he's deliberately ducking each one.

He doesn't like a forward woman, remember that blonde that made a move first time out last season? He made out with her and they messed around but he was all ehhh; much more interested in young Ally.

We're sailing! And it's lovely and magnificent and I wish I could capture that for my friend J but I bet she knows already.

All that heel has a very bad result for poor Marcos who is down in a storage area and literally slices off part of his scalp coming out of it.

Daisy and I feel faint, bleh, that's a big chunk. Yikes, are you okay, man??

Stop showing us the scalp!!!!

Oh no, Captain Glenn thinks this might be the end of the season for Marcos, it's that serious. Are we sure?? How can he get care on that area? Man that door really bit him. Captain Glenn calls a doctor while Marcos wraps his whole head.

Our main gross guest brags about not using deodorant then heads off to half the master to have sex with our Primary. Who agrees. After they smelled each other's pits.

Can...someone just tell me when they're gone??

Whew, the doctor says Marcos' cut is superficial and he's alright! He can stay and cook! Yay!

The crew sets up for the Going Through The Decades Party, there's a whole lot going on for just one night.

For some reason Gary will be joining the Captain and the guests tonight; I've never heard of the First Mate being invited to a dinner. Plus you just know he smells. 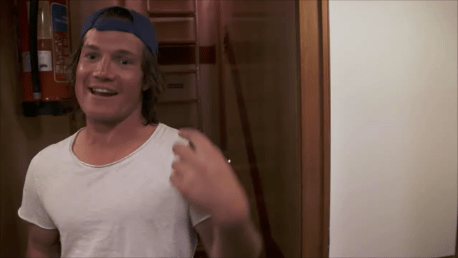 It's so informal! I can't get over it at all, Marcos has served everything requested and it all looks fabulous but also completely unlike a meal. It's all disjointed and I hate that he's trying so hard to please guests that have zero intention of ever being pleased. Guest Janelle actually leaves in the middle of dinner, she can't take Charles any more than I can.

I cannot take Cindi thinking like and being told she looks like Marilyn Monroe, nope. At one point she gives Captain Glenn a breathy Marilyn performance/lapdance that has Gary fighting to breathe.

Bedtime comes early for everyone including Ashley on lates, in bed before midnight. AND. That was the second night which means this is almost the end of this charter!

Gabriela is up for early shift; finding that Ashley didn't do some of the things on her list for morning, like fresh-squeezed orange juice. Woooo and they're leaving today YAY!!

Poor Marcos' head has been torturing him all night, he's such a good guy. I like him! I hope he heals quickly.

Captain Glenn takes Cindi aside and shows her the couch before they leave; they will be charged for the damage and it's a conversation that has to happen before they leave the boat. Cindi swears it wasn't her that had the bronzer, I guess everyone is going to have to pay for it!

There is no effing way Janelle is paying anything.

The tip meeting is slightly awkward in the beginning when Captain Glenn praises the interior staff; who've been fighting quietly with each other the whole charter. Daisy makes a pointed speech about getting along and saying something, we'll see how that shakes out.

I mean, that's what they do.

Time to clean the boat for the next charter, but Captain Glenn welcomes them to go out and have a good time which Gary starts by inviting Ashley and Gabriela into a guest bed with him. Awwww, Ashley must be so happy, getting Gabriela's sloppy seconds.

Chief engineer Colin MacRae stirs the pot by asking Ashley if second and third steward titles actually mean anything, c'mon, Colin. I know you like to sit back with popcorn but you don't need the entertainment that badly, do you? I mean, he does get Ashley's backstory out of her and I don't know how to feel about it.

She tells him (and all of us) that she doesn't get along with her older sister because her sister used to sleep with everyone she liked. In her room, on her bed, and then brag about it. There is something off-putting about Ashley, she calls it protecting herself against 'tricky' girls but there's something else there.

The crew dresses for dinner; Marcos hits his head!! Ouuuuch dude stop that! Everyone is fancy and drinking; Captain Glenn makes Daisy come with him to try getting that stain out of the couch but she just wants a drink. Finally she's released and we're at dinner!

Everyone gives Marcos his snaps for his cooking and attitude, he feels like he's part of a family already!

Everyone does seem to be getting along really well; Daisy takes a moment to talk to Gabriela about keeping the team tight. Ashley is across the table negotiating for Gary's attention. She is practically insisting that they hook up, and when they do she doesn't want him sleeping with or hitting on anyone else.

I think that's why she picked him.

He's a natural flirt, women apparently dig his cheesy greasy sweaty charm and she wants to lock that down why? As an accomplishment? I don't know but I know every single thing she's saying is making Gary want to do anything at all with her less and less.

Gary's all over Daisy immediately after, which Ashley just loooooves.

They head back to the boat, Marcos will not stop touching his scalp!!! Stop!!! Back on the boat they wrap his head in plastic wrap to keep his hands off it.

There's a whole other person on this boat we haven't even mentioned tonight, deckhand Kelsi Golgia fades into the background, but in a genial way.

Daisy and Ashley make out, then Gary and Daisy are at it again and then somehow Tom, Ashley and Gabriela all end up together in the hot tub alone talking about how cute Tom is. Ashley has made a HUGE deal out of how little she is interested in Tom, so this is fun.

Tom and Ashley end up making out hardcore and head down to a guest cabin together while Daisy and Gary make out in the hot tub. Daisy is extremely drunk, as is Gary. That's where we leave it, with Daisy and Gary almost drowning while Ashley gets naked for Tom.

Until next time! Cheers!