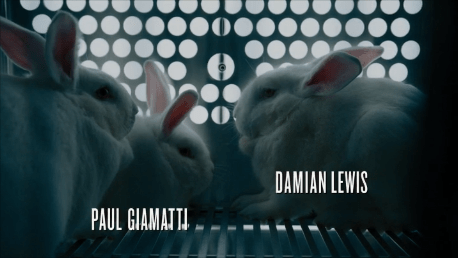 Back to back Billions? Why not?! I'm super behind and now I have nothing but time and an entire frosty jug of Crystal Light Iced Tea to chug today. Rolling S3:E06 The Third Ortolan after the break!

Secondly: have I mentioned how beautifully shot and scored Billions is? I must have been taking it for granted, because the opening credits and song just smacked me with their majesty.

That opening scene is Mike "Wags" Wagner (David Costabile) and Bobby "Axe" Axelrod (Damian Lewis) sitting at a table with towels over their heads, huffing wine because of course they are.

Now we're at a no-tell motel with Chuck Rhoades Jr. (Paul Giamatti) handing over the toxic slide with Bobby's fingerprints to Roland Aduba (Obi Abili). You see, the slide

Never mind, just go back and read the recaps. It's too complicated. Chuck's plan is to have it hidden in Bobby's apartment, but that won't be easy with Bobby's 12-year-old security team guarding his sweet bachelor pad. Bro.

Now we're at Axe Capital with Ari Spyros (Stephen Kunken) and Taylor Mason (Asia Kate Dillion) who can't get into the emergency slide/pre-court meeting Bobby is holding with attorney Orrin Hach (Glenn Fleschler) and his baby guards. Bobby knows Dr. Gilbert (Seth Barrish) is cooperating with the feds, but nobody can find out where the evidence itself is.

Bobby sees Dr. Wendy Rhoades (Maggie Siff) approaching and lets her know she can only enter if she retains Hach as legal representation for the protection of client/attorney privilege, but she doesn't want in that bad. She looks forlorn after.

Oooh Oscar Langstraat (Mike Birbiglia, whom I adore) followed up his one night with Taylor with a lovely display of delphiniums, which are apparently the nerd version of roses. I'd take some Gerbera daisies in a pinch, but then I'm a plebe.

Taylor has more to do than just fondle their flowers, they're working on an algorithm with a young team of engineers and it's almost ready.

Chuck sups with Black Jack Foley (David Strathairn), they have to start working on his run for Governor. He's to be paraded like a showhorse in front of rich people, after we're sure he's squared away. How's Chuck's marriage? Black Jack wants a meet and greet with Wendy before the cantering, he appreciates Chuck's steady eye contact when he lies that it won't be a problem!

Bobby's off to the deposition, Dollar Bill Stearn (Kelly AuCoin) is excited! He feels good news in his nads!

Side note: when is the last time you heard a grown adult refer to his reproductive organs as nads? Oh come on, wobblies is much more mature!

Oliver Dake (Christopher Denham) preps Bryan Connerty (Toby Leonard Moore) for court, he's got this! What he DOESN'T have is evidence, so that's like super stupid that they're in court already and Bobby's been restricted from trading for ages, innit? Judge Adam DeGiulio (Rob Morrison) and Orrin sure think so. DeGiulio gives Bryan one week to produce the funk, which may noteth be faketh.

Wendy checks on Taylor, are they doing okay with all the legal stuff going on? Ehhh but Wendy's there to tell Taylor to listen to their gut. NOW they're worried.

Bobby send Cheekbones (Brian Wiles) and Young Josh Brolin (Tom Lipinski) to check out the FBI evidence locker while Chuck gets the bad news from Roland. He's quitting, no way into Bobby's place and no amount of money is going to help his family if he's in jail.

Chuck approaches Ari with a deal; spill or he talks about the date rape Ari committed decades ago. Ari counters that they're not in Hollywood, they might even make him president!

Adam is the best judge ever, he makes Bryan push himself through the death valley of emotional dip and gives him a hilarious pep talk that inspired even me.

Taylor and Oscar video-chat while I make retching noises in the background and roll my eyes, I'm worried Oscar isn't as invested as our robotic genius. They're also sharing a lot about the day to day working of the office, don't do that! We just met Oscar! He does help them realise they have to completely restart that algorithm.

Ari goes rushing into Bobby's office with his idea for an offensive move: he found Wendy's fateful Ice Juice trade (seriously, just go back and read the recaps) AND was able to prove it was made in Chuck's office (thanks NSA! I am so creeped out right now).

His solution of throwing Wendy to the wolves is not well-met.

Unfortunately, he "already went full LeCarre" and handed all the data to Bryan. Oooooooh. Wags and Bobby are furious.

Bobby's got to tell her. Wags wishes him godspeed as time slows down and Bobby approacheth.

Wendy looks AMAZING as they stare at each other: why can't they bang yet?? Bobby can't make Wendy feel safe but he would really, really like to.

Bobby hands over his burner, Wendy uses it to call someone on her way out.

Bryan hands over the files to Dake: it's time to take down the Rhoadeseses.

Chuck and Wendy hug in their living room while I wish they would break up already. No, don't kiss. Okay fine, now stoppit. Chuck's plan is to give Bryan a bigger hardon for Bobby than him, that's 14A right? Sure.

Bobby contemplates taking a plea deal for Wendy while Orrin explains all the reasons that would be a very bad idea. Then he goes outside and has to explain to his estranged wife Lara (Malin Akerman in a criminally small role this season) that he's planning to take a plea deal, which he said he would NEVER DO, and why? Sure, Bobby, go ahead and tell her it's for Wendy!

*getting popcorn but feeling bad so hiding behind couch to eat it. Plus, Lara can go OFF*

He doesn't tell Lara exactly why (booo! whew), but she still threatens to take the kids to California if he does plea. She gives him a pep talk as a goodbye, he needs an Adam!

Speaking of...Oscar has shown up at Axe Capital with a baggie full of provisions so Taylor can pull an all nighter writing code while he keeps them company. I wish I thought this was awesome and romantic, this just seems really fast and I feel very protective of Taylor who hasn't shown a romantic interest in anyone or in having a romantic interest at all before now.

Bryan breaks it down for the Rhoadeseses, everything is coming together now that they can define Wendy's role. What? Wendy didn't have a role, she was just mad at Chuck for being an arsehole, which is why she was divorcing him!

Now it's Wendy's turn to make a decision: she can throw Bobby under the bus and save her family. Which includes Chuck, it must be said, so.

We're back to the wine huffing with Wags and Bobby; the chef tells us the whole story. Apparently Ortolans are an illegal delicacy from France and

These are tiny little song birds, DROWNED in Armagnac then eaten whole.

I get it, you're all disgustingly, stupidly rich. Why you gotta be tiny-songbird-drowned-in-booze-eaten-whole rich?? And then Wags asks for more because feeling the tiny ribcage crunch between his teeth was a religious experience?

Bobby seems mostly contemplative, he's feeling Ortolanish himself. It bringing him back to when he made his first 10 billion dollars. They went fishing! What happened to them?

Bobby fought the law and the law won.

Wags is gonna miss Bobby, almost as much as Bobby will miss him. I like their friendship.

At home, Wendy twists and turns at two thirty in the morning, Chuck's up and contemplating eating his fear. She's got an interview with Black Jack the next morning, but she's so scared too.

How long until she realises he'll expect her to sacrifice herself for his career, one way or the other?

Taylor and Oscar are cuddled up in bed, they're coding and Oscar's looking adorable.

Black Jack starts with flattery on Wendy, but he's an interesting man and not one to dwell on niceties. He's just feeling her out at this point, but does offer a solution to her problem. It involves a Zen master and, well, basically, Wendy has to think outside the box and come up with her own violent solution.

She's, like, SUPER good at violent solutions. Exhibit A:

Sr. is furious that his son is at risk for prosecution when Axelrod is out there running around free and shite. His terrible advice (don't tell the kids until the verdict! or see the shame!) is ignored but Chuck has an idea all the same.

He calls Kate Sacker (Condola Rashad) to set up a search warrant for the morning and trots off to Bobby's place with Wendy. Seriously. Bobby lets these two into his home. Chuck HAS the slide with him!

I'm starting to hate that stupid slide. Why didn't Dr. Gilbert get rid of it anyway? He actually was somewhat altruistic back in the day, if not the best doctor what with killing Donnie.

Wendy is definitely in charge right now, at least on the surface, screaming at her two fellas to sit DOWN.

Nobody leaves until this is solved! It's like a WASP cage match over a mahogany table worth my yearly salary that nobody even notices.

Chuck excuses himself to plant the evidence, awww, he's still trying to win. I hope Wendy isn't aware because no way there aren't cameras. Maybe not in the super fancy bathroom, which is where he is with it....does he plant it?

Instead he says "YOU WANT TRANSPARENCY" or something similar and slams the slide down on the table which spooks everyone, including me.

Which oddly seems to be some kind of secret play between Wendy and Chuck and I am confused but we're out, so.

I feel as though I need to adjust my expectations again, what is Chuck's play here? The good news is that I'm so behind I can just roll right into the next episode like nobody's business! Woooooo! Cheers, m8t