Hi everyone, welcome back already to Cardinal, this time for season 3. I understand we only have four in total, I'm almost caught up! We left on a grim note last time, let's see how our lead detective is faring alone. Rolling into Cardinal S3:E01 Sam after the break.

We begin season three exactly where we left season two, with Detective John Cardinal (Billy Campbell) staring at the body of his dead wife Catherine (Deborah Hay). She had just found out some terrible news that John had been keeping from her, she was accidentally responsible for the death of a police officer while she was in the manic phase of her bipolar disorder. Catherine had attempted suicide before so John has been watching her like a hawk, trying to move obstacles out of her way and monitor her mental health. That...was not going well, but now. Now she's dead, looking to have jumped from an area he warned her about before.

John's partner Detective Lise Delorme (Karine Vanasse) just helped close a case with him but now she's guiding him away from the grisly scene of his wife's body. Lise cries by herself but she's not the only member of John's team that's upset, Detective McLeod (James Downing) looks devastated. He hands Lise the note he found in Catherine's bag.

Sergeant Noelle Dyson (Kristen Thomsen) shows John the note; had Catherine been behaving unusually? She had been, and he doesn't know the half of it.

They take Catherine's body away and John goes home to call his daughter Kelly (Alanna Bale) in Toronto.

There's so much pain and loss in the Cardinal family, but the strangest part is that it's not new. There has always been a grey shroud of worry and suffering over the family. Kelly chooses to handle her grief with anger, but John is numb.

Where it was grey, everything is now sepia toned. Lise and Noelle make small talk in the funeral home while Catherine's psychiatrist Dr. Frederick Bell (Stephen Ouimette) asks John if there's any way he can help.

John's still stunned, he doesn't even say anything about barn doors being closed too late.

After the service, John and Kelly return home where gifts, food and flowers have been left on his steps. There are cards, too, one beautifully appointed black one with his name. He's shocked out of his numbness by what he reads.

*That leaving food and things on the stairs is the best thing I've ever seen. I will do that the next opportunity I have.

Whatever is in that card has devastated and woken him up, he's left gasping for air and picturing Catherine everywhere around him. 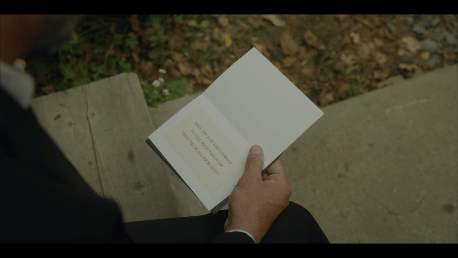 Double yikes. Who would leave such a thing for a grieving widower?

Line cook Sam Duchene (Devery Jacobs) gets a call from Randall Wishart (Aaron Ashmore) to come secretly meet him at someone else's house for sex, all of those things are the hallmarks of a healthy relationship. She's disappointed when he jumps out of bed after, but he swears he's working on having more time to spend with her.

She doesn't leave quickly enough after dressing, she's still pouting at herself in the mirror when she hears voices downstairs. She takes a peak, there are three people talking. This clearly is not hers or Randall's house (he protected the bedcovers with a blanket he brought and took with him) so she sneaks back into the bedroom and hides under the bed.

Suddenly there is shouting, then gunshots and blood spraying on the wall. Sam frantically looks around the room and instead of staying where she is under the bed where nobody knows where she is, she grabs a stool and breaks the bedroom window to get out.

The hoodie-clothed gunman hears the glass breaking and goes upstairs but she gets away as he shoots at her in the driveway.

Sam gets home with a cut hand and leg and most likely in shock. Yikes, the gash on her knee is deep and wide, it needs stitches for sure.

Lise brings John a box of Catherine's personal effects, the coroner has ruled Catherine's death a suicide officially. John hasn't gotten any more notes lately, Lise thinks it was "just some a**hole who wanted to feel power over a cop."

Lise tiptoes around, offering that John can come back to work next week but he'll start tomorrow. Would he like to drive in with her? No.

Sam calls Randall about what she saw, but he can't talk, he's at work and someone is listening like a wife.

John's still pretty out of it at work, but Noelle gives him some files and he gives her his condolences about her sister. He'll be working on a series of ATM robberies, Noelle gives Lise the lead on the Island Road murders that Sam earwitnessed.

Lise and John head to the scene, the house is drenched in blood but the bodies are gone. They don't even know how many people died there yet.

Abby Harris (Kathryn Alexandre) takes us through the forensics left on site, ahh, they still don't know there were three people downstairs that were murdered. Nobody's prints were in the system and the owners of the house were not in residence. Were they selling the property? Is that how Randall knew? Is he a realtor?

John receives another card at the police station, but doesn't tell anyone right away. Is he internalising this guilt? This card is another direct attack. 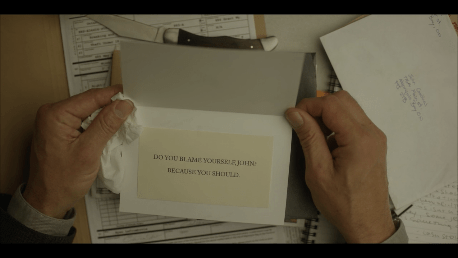 He doesn't say anything to his team in Algonquin Bay, instead calling Detective Gerry Commanda (Glenn Gould) of the Ontario Police Department (think State Police) to ask for assistance with document analysis.

Lise is sitting in stakeout for the ATM murders later that night but her attention is drawn when she sees a man pull an unsecured rifle out of his trunk and place it casually next to his car. He's a vendor at the upcoming sports show and unfortunately the ATM robber shoots a victim as she is distracted. She follows him on foot as he runs away but loses him immediately.

Ah no, the victim isn't just hurt, he looks to have been shot in the head. She frantically calls for backup and ministers to the fallen boy.

John has a brainwave staring at pictures of the Island Road house, he thinks the bodies were dragged and dumped in the water. McLeod comes in with new information, the homeowners are safe and have no idea who else would have the key, aside from their realtor Randall Wishart.

Randall floats a good alibi, but since we know he was in that house, Lise and John will have him nailed down shortly. This may accelerate all that extra time he's been looking for with Sam.

Lise and John hit Randall's friend Troy Campbell (Josh Cruddas) up for Randall's alibi, interesting how they both say the same thing about the game they supposedly watched together.

And suuuuuuper hinky. John and Lise know they're onto something.

John jumps in with Lise for a drive to the OPD headquarters in Toronto, he has his own things to check out. The chatty lab tech tells John he has a limited amount of time to find the person sending the cards, once the ink cartridge runs out, the special marking she's noted will be gone.

He hands her Catherine's suicide note next, but her cavalier reading of it is too much for him. He just needs to know if she actually killed herself or if the yahoo sending him notes is responsible.

The lab tech is able to confirm that the note is written by the same person who wrote the rest of the journal, but also that she wrote the note, THEN turned the page and started a to-do list. That's...odd.

Lise and John discuss the Island Road case on the way back to Algonquin Bay, it's similar to a case John remembers from long ago. Three victims, signs of attack and the body removed from the scene. He doesn't know why the survivor in their case hasn't called them yet.

I want to know what phone Sam called Randall on, since she dropped hers in flight and the killer has it. And who writes their full name on the back of their phone, I ask you? Nobody, that's who.

John dreams of Catherine, woken up by the news that they've found something in the lake. It's the missing boat and dead people.

And with that gruesome image, we're out. Until next time, everyone.